The Second Sun shines brightly on Tikor, hiding its own secret


Tikor sits under the watchful eyes of two suns. One built by the cosmos, the other a vile afterbirth.

Nestled on the horizon, behind Tikor's first sun sits one of the few things the Withering King ever created, Adume. The second sun of Tikor is said to be the fiery remains of the contemptible womb that Xavian created. At the beginning of Tikor, the corruption god battled with the mother creator, Ishvana. In a ploy she never thought possible, the despicable deity abducted a number of the planet's elemental spirits and deities, creating a prison-like womb around them. What hatched were no longer her children, but horrifying world breaking dragons. In a twist of fate and perhaps luck, when the dragon Ryuujin touched Tikor's soil, his previous life as an earth elemental came to him. He would abandon Xavian's mind control, helping to turn the course of battle. The remains of the prison the dragons were born from, still smoldering with raw power, would become a second sun above the planet, an unwanted reminder of Xavian's influence, and a source of unremitting heat for the southern half of Tikor.

The original sun sits in its fixed point as Tikor and the other heavenly bodies revolve around it. The cursed sun Adume, however, doesn't seem to hold a fixed point, nor do other heavenly bodies seem to orbit it. As far as astrologers can tell, Adume simply maintains a fixed orbit that keeps its rays directly on Vinyata. It's estimated that the temperatures in the south would be on average 35 degrees cooler, and the climate would allow the development of vegetation and other delicate life if Adume were not present. The impact the second sun has on the land is so profound that one could believe Vinyata was cursed if its progenitor had not hand-picked the spot. The Dracon say it is to own a sense of his birth, the Karu say it's out of atonement, though many people would think otherwise if they knew what Adume really was.

Around a decade before the war, Kent Musa and the Omicron Space Lab launched a surprise project under the cover of night. Using adapted missile technology, Musa and his team sent out a space probe. For quite some time, the pioneers at Omicron had gazed up at the sky and wondered what could be. It took years for them to find a speed that allowed them to break the strange barrier around the atmosphere. With the adaptation of some Latimer drives, Musa was able to break that barrier for a few seconds. The data that they received from this probe caused the CEO to swear the entire team to secrecy. They poured over this data repeatedly to make sure their findings were true. Kent and his team were floored by what they had discovered. Adume was not a sun. It didn't pulsate like the original, unnamed sun. Adume was darker, different. The core body itself couldn't be detected, only the edges. The "second sun" was not a sun, it was a black hole.

Many have wondered where Divine Entities like Ishavana and Xavian come from. What created that which created us? This question is too large for most to ask, let alone answer. A crazy tale and theory have gone around for centuries, only believed by the most devout. The tale says that a man came across a puzzle box. Intrigued by the beauty of the box and detail of the puzzle, he set to open it. It would take him a total of 15 years to solve the puzzle, but when he did he found a head in the box. One of the fabled Godheads, it awoke and offered to answer any questions. The man asked where the greatest of them all, Ishvana came from.

The head gazed deep into the man and whispered, "From a hole so dark that only light remains, a place not for the mortal coil. Pray until thy death that the door stays closed." The image of the door appeared in the man's mind, rendering him blind. Some believe this a cautionary tale about asking for too much. However, a fringe theory came from the quaint quip, "What if the gods came through a portal deep in space?" The theory would usually devolve into the distance lizard people could travel, rendering the theory forgettable for most. What Musa found, however, put a light on the fringe theory.

Musa's team came up with a set of theoretical assumptions based on the brief burst of information they received and historical documents like the tale of the puzzle box. The star womb that Xavian created most likely was not a sun initially. After the Wretched Ones were birthed from the celestial object, it collapsed upon itself. This either created a black hole with the force of the collapse, or perhaps the black hole was at the center of the womb the whole time and was merely revealed by the collapse. Either way, the end result was a black hole that began to emit light enough to change the surface temperature of Tikor. Thankfully, this second sun was far enough way to not destroy Tikor. Adume has always been a silent mystery in the sky, a source of many myths and tales. Omicron had accidentally stumbled across some of the answers to these tales, and even more mysteries.

Omicron has been attempting to break through the atmospheric barrier to gather more data, but all subsequent efforts have failed. While no one on the probe team doubts the validity of their work or data, without the ability to verify it, no one is ready to go public. The news that the second sun is something more is a lot to accept, and it raises far more questions than it answers. Until further evidence can be collected, Kent Musa has ordered the entire experiment be kept Top Secret. 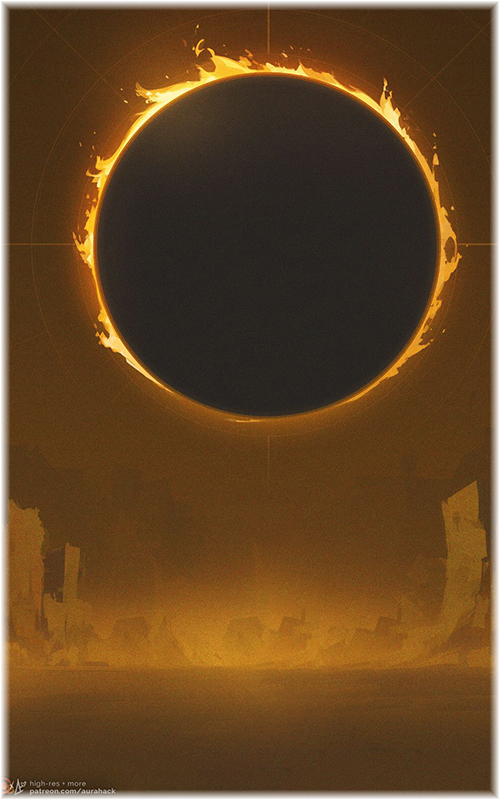