Return to the Unifier

A rattataki tribe member's death is felt in the whole community, and each member will participate to wish the deceased good luck and fortune on their journey back to the Unifier. A gathering is held at the tribe's central area, the fighting pit if the most convenient, and the deceased will be carried to the center of circle created by the clan crowd by their closest relatives. At the circle's center is a canvas of hide especially meant for this ritual, safe-kept by the shaman and brought out along other ritual components ahead of time.   Aside the approaching relatives and the dead family member they carry, the shaman is the only one inside the circle's center. All of the deceased's belongings, including clothes, will be removed, cleansed and set aside by the shaman. And for the following hour to hour and a half, the shaman will proceed with cleansing the body of the dead itself by scrubbing it thoroughly with red-hued clay. Once the body has an even reddish hue its considered properly clean and the ritual can continue. 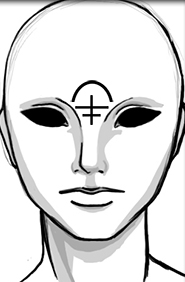 The inkmaster joins the close family and the shaman inside the circle. He assists the shaman in removing the dead's eyes, which are considered the seat of the soul, so they can be burned in a stone bowl together with the mixture of herbs. Ashes left behind from the fire is used by the inkmaster to create the ink used in carving the death rune on the dead's forehead, close to the eyes. The rune seals the body and prevents it from being possessed by evil.   Next to join in the circle is the carver, carrying a set of gifts from the tribe as a whole to aid the dead while they make their journey back to the Unifier. Each item has been incised with runes to help them on their way and the item sets are usually uniform unless the dead was a particularly distinguished member of the tribe in which case more personalized gifts are given too. The basic set of gifts are a set of clothes, a stone knife, a pouch with herbs and dried food, and another small pouch with small stones. The small stones hold a rune each: the signs for water, fortune, endurance and bravery.   When the body has been equipped and the soul sent on its way, the dead's family members are tasked with carrying the body out of the settlement. The family will walk at least two days away in any direction and lay the body at the foot of a landmark - usually a rock or similar - and then return home again. The total of four days the family is gone from the settlement is the grievance time, where relatives and friends are given space to mourn the lost family member.   Once the close family of the dead has returned to the settlement, grieving is considered finished and the daily routine is expected to return to normal.

The shaman will bring a large leather canvas to place the dead's body, usually made from stitched together pieces of animal hides. Larger hides are hard to find but often considered 'better'.

Red clay can be found in abundance at the foot of the mountains, or by digging a distance down into the earth. It's common for a shaman to have a storage of already prepared clay. The clay is collected by hunters or warriors, dried and then grinded down to a fine dust before being stored in large stone jars behind the shaman's hut.

A bowl made from stone, about the size of two palms. The edges are normally decorated with incised runes and the bowl's bottom has the Unifier's symbol.

A tool used by the shaman to extract the dead's eyes from their sockets. Usually made from a piece of animal cheekbone cut by the carver into a spoon-like shape.

These are used by the shaman to burn in the stone bowl together with the dead's eyes. The ashes are then mixed into an ink by the inkmaster afterward.

A set of pre-prepared items gifted to the dead that'll help them on their journey. The set usually held a set of clothes, a stone knife, a pouch of aromatic herbs and dried food, and a pouch with small stones. The small stones were carved with a rune each signifying water, fortune, endurance and bravery, and blessed by the shaman.

The shaman leads the ritual's proceedings. He will perform all of the cleansing components, direct the other participants and speaks with the Unifier.   Other key roles are the inkmaster who'll place the death rune on the dead's forehead, and the carver who has prepared and brings in the gifts given to the dead. The dead's immediate family will carry them in and out of the circle, and will also be present throughout the ritual even if their participation is minimal.   After the ritual, it's the immediate family that carries their dead away from the settlement.

The Dead That Walk

Among the Rattataki, being dead is a spiritual state rather than just a strict physical one. Death marks the fulfilling of a cycle where those borne of the Unifier ultimately also return to the god.   Clan members who failed their coming of age challenge, have committed grave offenses against their tribes or performed other unforgivable sins will be forced to leave the tribe and reunite with the Unifier - if the Unifier will have them. Such an individual will be subjected to the same ritual proceedings as they should have been had they been physically dead, and their immediate family will in this case be the ones to restrain them so that the whole ritual can be fulfilled. Colored red, wearing the death rune and eyeless, the individual will then be carried two nights away from their settlement by their family and then abandoned in the wilds.   As a general rule, these dead that walk aren't very long-lived. The heat, lack of sight, and various predatory animals will often finish the job.   Should a dead that walk, against all the odds, survive they will be avoided by others. Since their souls have been freed to make the the journey back to the Unifier, the husk left behind and still walking is nothing short of a terrible abomination to be abhorred and feared. It's not the individual they used to be that makes the body wander, but something else. Something evil that wants to nestle itself into the world of the living.   To ward oneself from them, Rattataki are told to not look at, speak to or even acknowledge one of these beings. And there have been cases of tribes relocating because of one wandering too close to their settlement. Since children, due to their inexperience and natural curiosity, are considered more susceptible to a restless soul's influence they are often told cautionary tales about the dead that walk to scare them.
Blood Siphoning
Fanfictional History and Lore distributed under the CC BY-NC-SA license.
Characters, Stories and Maps (c) , Caterine & KnifeMissile. All rights reserved.
Artwork (c) their respective owners. Images with no credit are screenshots taken from the SWTOR mmorpg.