Near half a man taller than the average human, this individual is an intimidating sight for most with his hulking figure and gleaming white orbs for eyes. His deliberate movements further enhance the impression of immense strength. The lower part of his face is obscured by a rebreather.
It’s not the breath of strong liquor or that ingrained odor of old cigarette smoke that’s left this man without friends. The purposefully roughhewed, outspoken and even outright brusque exterior displayed by this man, combined with a frigid and detached attitude, is many times enough to repel most people and keep the rest at an arm’s length. And the few real friends he did have are either long gone or dead.   Instead, friendships and companionships became something to cultivate when necessary or when he had use of them, which he has an easy enough time to do when putting his mind to it. But just as easy as he gets them, as easy he also gets rid of them. Because even in a group he’s alone.   All he has is anger, lots of regrets and even more local rocket-fuel.

After a mental meltdown, Reolleh has been taken out of service and had most of his agent privileges taken away. He is currently on orders to keep a low profile under a new alias and undergo rehabilitation. And it’s been difficult for him to accept he’s no longer kept in the loop and even worse to not have any meaningful work to occupy his mind with.

To most Reolleh is rude, burly and brusque, with little patience for tact and timing. At the same time, he’s honest (a bit too brutally so at times) and places a great amount of importance on fairness. His personal moral code has its base in his Mandalorian upbringing, though some of his once steadfast principles have begun to erode thanks to external wear and tear.   On the surface, he may give the impression of being overly simple-minded. He is simple in a way yes; in the manner that he thinks that other people tend to waste a lot of air and effort overcomplicating matters. While he certainly could, he just chooses not to concern himself with the finer details.   To the rare few that had managed to earn his true friendship, he was a fierce protector of and loyal to a fault to. In their presence, he used to be a pleasant guy to be around.

Reolleh stands an impressive 230cm of height and weights around 270kg. Being a species adapted to a high-gravity world lent to thick bones and heavy, corded muscles. And what he doesn’t have in speed and agility he more than well makes up for with strength and resilience.   His most striking features are the milk white eyes that lack both visible irises and pupils, and the sky-blue skin tone. His jet-black hair has a metallic shimmer to it and kept short purely out of convenience. And while preferring to stay clean shaven, he at times may be lazy enough to let his beard grow to a two-day stubble.

Reolleh prefers simple clothes, such as just plain shirt and baggy trousers, but will dress to impress in the circles he moves in for the moment. The only permanent feature is the rebreather covering half his face, required to filter in a trace gas he needs to survive.

Right now, Reolleh is a man of few allies and countless of enemies.   He is, under one name or another, a well-known name in several criminal circles and most with decent connections to the outside Galaxy will at least have heard one or two stories of the man.   His most long-withstanding alias is that of Kyton Ross, under which he worked his way up the ranks of the Black Sun during his involvement with them over the course of 5 or so years. He began as the part of a street gang named the Vibrosaws which were absorbed by the syndicate, and ended as one of their Vigos. There were several times where his employers got concerned he might go native, and thus decided to pull him out eventually.   He as well spent a little over 3,5 years infiltrating the Twin Suns as Tyron Sayul, and it's during his time here he meets Tabeth'eh with whom he'll keep a stormy relationship with off and on up until very recently. Ultimately he cannot stand the gang's ultra-violent, vicious ways and demands to be extracted.   The involvement he had with the White Maw as Icohan was brief, just a couple of months, and his primary job while with them was to monitor their movements. He always believed the job was a poor excuse for pulling him out from the Black Sun.   Another alias he kept for about 3 years was that of Torm Jouric, which was the stolen identity of an Exchange Maven that had been captured along with his entire cell. The cell was officially expunged when their base was unexpectedly found by imperial forces led by Darth Flaye.   Lastly, he went under his original name Reolleh as he infiltrated Clan Beviin, by marrying Riann Kas. During his time in imperial space however, he was assigned with an overseer to keep tabs on him: Jaylazz Ley. 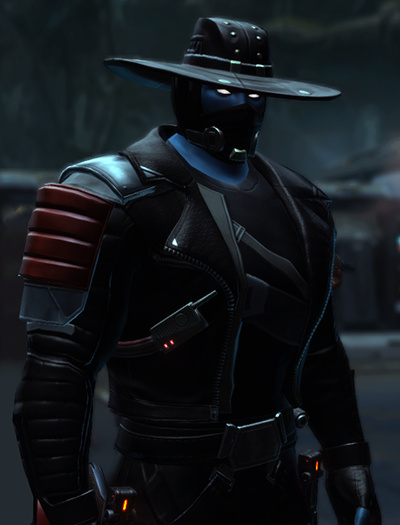 Corellian streetwear was his preference as Kyton Ross within the Black Sun. 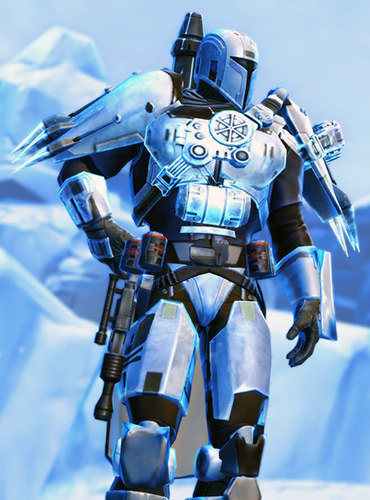 In Clan Beviin, he wore a heavy and bulky beskarn with the rebreather unit built into the helm.
Characters
Fanfictional History and Lore distributed under the CC BY-NC-SA license.
Characters, Stories and Maps (c) , Caterine & KnifeMissile. All rights reserved.
Artwork (c) their respective owners. Images with no credit are screenshots taken from the SWTOR mmorpg.