The Face of Finn

The Face of Finn is the sculptured face of a dwarf carved into the side of the vast mountain that holds the Kingdom of Karag-Finn, behind which sits a cavernous complex of workshops, forges and artisan's studios. The Face is exactly 729 feet in height from the top of its brow to the base of its beard, and is constructed approximately four fifths of the way up the mountain's 12,000 feet height, with its serious, slightly stern visage keeps watch in exactly a southerly direction.

Started in BF124, the Face itself took 52 years to complete along with the simultaneous construction of the complex behind it. The workshops, forges and attached residences have continued to expand and grow throughout its existence, adapting to the overall needs of the community within Karag-Finn.

The complex was designed to be a place for dwarves to labour and practice their craft in the myriad of workshops and forges doing so in accordance to the First Writ of The Catechisms of Adrudar and the Faladrun faith, as is practiced by all who dwell in Karag-Finn. The Face of Finn was seen as outward expression of this craft, a literal statement of the skill of those who toiled and laboured in its creation, the aspect of the Maker in a physical form. The products of the complex, be they tools, weapons, armour, or other crafts also serve as one of the main trade goods for Karag-Finn.

With the completion of the Face in BF72, it was decreed that the Maker's Writ should be further edified upon the monument. The entire 81 staves of the Catechisms were then carved across its surface in 3 inch high runes taking another 107 years to complete, to further extol the message contained within.

Answering: "Describe the most impressive landmark in your world."
Visit James's Competition Page Check all other answers to this prompt Competition Homepage

Very interesting, I do have a fable for dwarves.   I would recommend adding an excerpt or clean mention linking to your article on The Catechisms of Adrudar so that readers can get a descriptive tooltip when hovering over it, and I would also add a bb tooltip to at least your first use of your BF reckoning, telling readers what it stands for and any other information about the age it represents; one sentence will do nicely.   I also recommend adding about two article blocks underneath your sidebar, seeing how you have plenty of room, and it will make your article look more alive and interactive.   Good job, hope the comment helps ^_^!

That's a little over my head at the moment coding wise... but I appreciate the pointers. All good things for me to work on.

It is not as difficult as you think. When you write an article and click on the "Display" tab, the excerpt line is the first field you should see. This is the short description for your article. To have that as a tooltip when you link to it, you merely need to use the @ mention system to link to that article. This works by just typing @ and a few letters from your article's title, and you will get several suggestions you can click.   As for creating bb tooltips, just find the text you want to add a tooltip to and use this bb-code. [tooltip:TITLE]TEXT[/tooltip] Now, to disect this: You put the word you want to add the tooltip to where it says TITLE and the text of the tooltip itself where it says TEXT ^-^   and as for article blocks, well check this screenshot out: 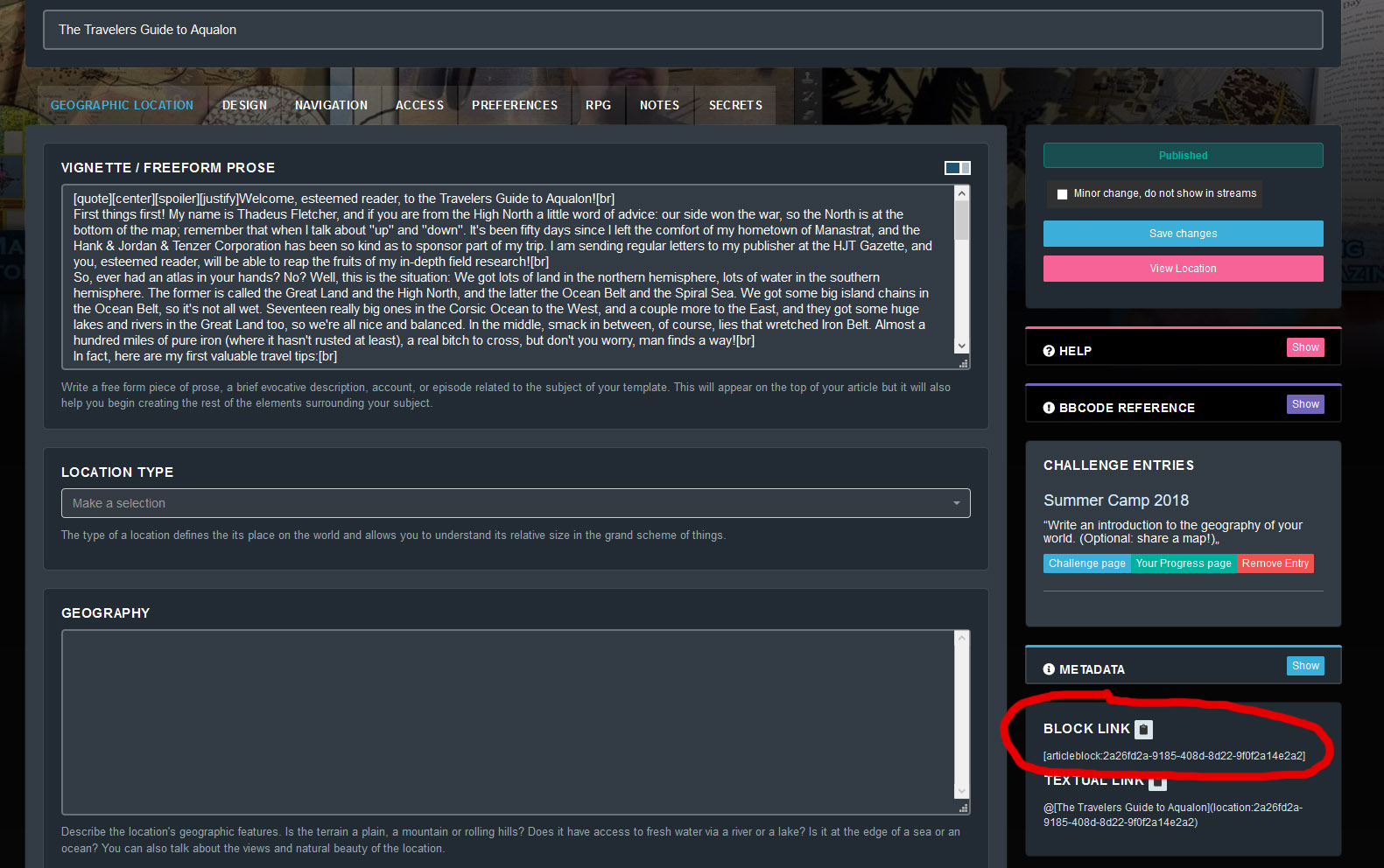 As you can see in any article editing view there is this little bit I circled in red. This is the article block bb-code, simply paste that anywhere in your article, like under the sidebar (which you can also edit under the Design tab) to get something cool like this:

(this article also utilizes articleblocks in its sidebar. As you can see, the block automatically transforms to fit the surrounding width ^-^   I hope this helps.

Excellent article! I love the visual it produces that the forges and smiths behind the face are its 'brain'. I will say though that your header image threw me off as it made me expect more of a seaport than a mountainous region.

It's the standard header with the CSS theme I'm using (I'm no wiz at that stuff) so once I have a more appropriate image I'll alter. :)

I could easily see the face in my mind's eye. Was the face based on anyone in Karag-Finn in particular?