Askarion or "Tank" as he's so fittingly called by his friends and colleagues, is a large brown-scaled Vesk brimming with muscles. He lives by a code of "Mercenary's Honor" and does his best to uphold those so-called ideals.
Askarion grew up on Vesk Prime where he learned the greatness of battle and the beauty of war. A brutal and harrowing career as a mercenary has done much to dull his lust for combat however and now he mostly fights because it is what he does.

He started out by doing some bounty work for the authorities of the Vesk. This is where he gained his initial credits as a mercenary.

After that he joined a band of free fighting mercenaries called “The Larger Fish”. The name was an old joke between the two founders. This is where he learned the code of The Larger Fish, a code that he still lives by. It basically amounts to:

Do the job that you’re payed to do.
Never quit a contract unless the employer is cheating you in some way.
Never betray your fellow employees.
He got most of his mercenary experience from The Larger Fish. They killed goblins and warlords. They killed giants and marines. They even killed a snail once (it was a very very well-paying job).

Currently Askarion is sitting on Vanar after finishing up a delivery job for a private employer. The Larger Fish has been giving very few jobs out lately, so Askarion is starting to look around for jobs himself.

A long career as a semi-successful mercenary has left Askarion a cynical and grizzled Vesk. While he is not an unpleasant person to be around, he abandoned all fine notions of "glory" and "honor" long ago.

Askarion killed the infamous "Snail of Perdition". He fought and won a duel against the pirate calling himself The Asteroid Lord. He was part of one of the teams that boarded The Ascension and fought aboard that cursed vessel.   20 years of mercenary work has seen that he's got plenty of war stories to tell.

At Crow's Nest he was shamed in a dogfight and had to fly away with his tail between his legs. He does not like being reminded of this. On an unnamed asteroid far away from the "civilized" part of the galaxy, his team fought a strange kind of xenos that seamed to blink in and out of reality. His team fought against them for 4 straight hours. His team died for 4 straight hours. In the end the few survivors were forced to retreat and Askarion still has nightmares about it to this day.   He's seen countless colleagues and even a few friends die on the job. While he has gotten mostly used to it at this point, the worst ones are etched into his memory.

Askarion lives by the code that he learned from The Larger Fish. This means that he won't ever break a contract and he'll always stay loyal to his colleagues. This is done so that he will always be hire-able.

To do what he does best! Which, to be fair, is mostly killing.

Cold. Doesn't really care about the "big picture", just as long as he gets paid.

Over the years he has forged strong bonds with several of his colleagues and he makes sure to keep tabs on as many of them as he can.

Pays homage to The Pantheon but is not actively religious

Sniket fixed up an old power armor for Askarion and has kept his armor functioning ever since. 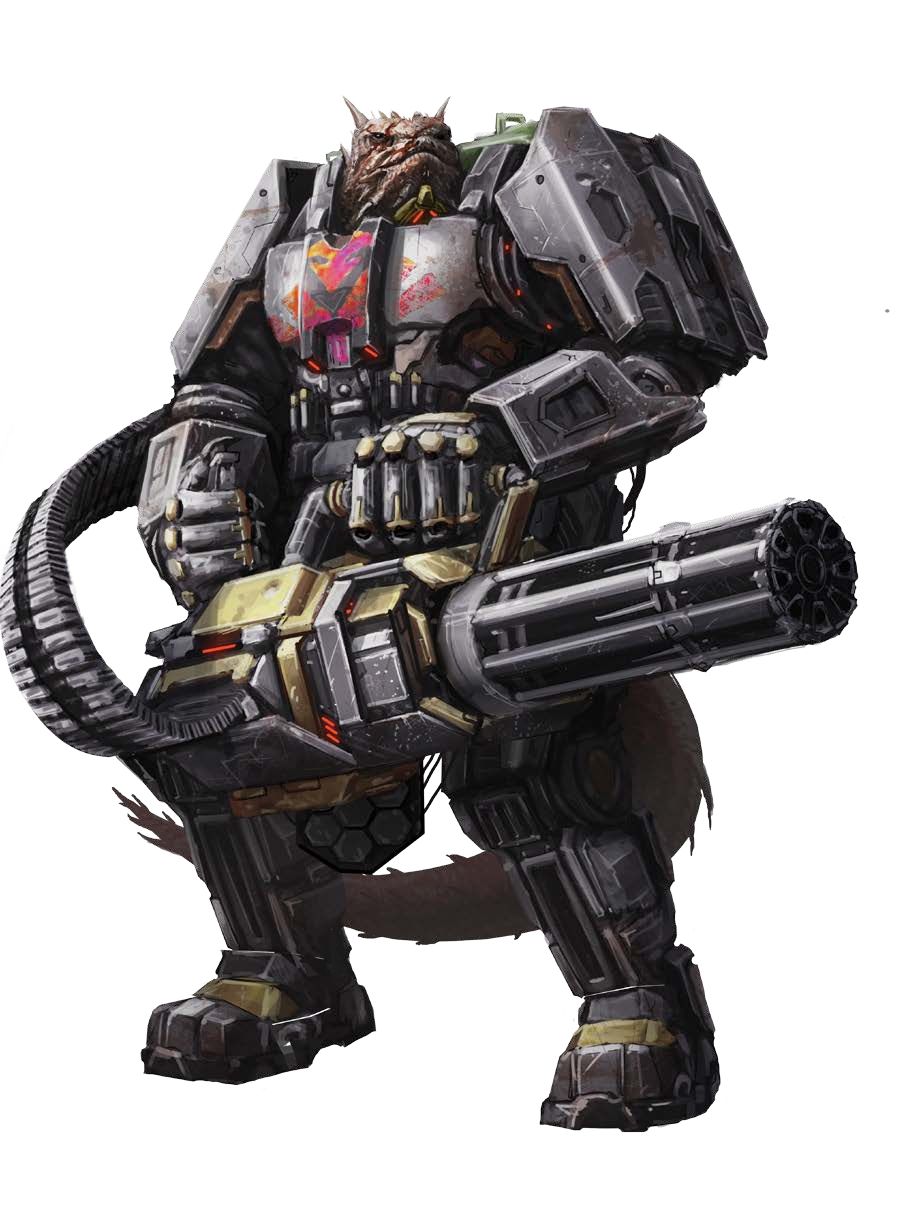 Species
Vesk
Year of Birth
389 38 Years old
Birthplace
Vesk Prime
Current Residence
Vanar
Gender Identity
Male
Eyes
Black, lizardy
Hair
Quite scaly
Height
2 meters tall
Weight
200 kg
Quotes & Catchphrases
"I'm a mercenary. A soldier of fortune. You know what that means? It means I do whatever you tell me to do. But you better ensure that I make a fortune doing it"
Known Languages
Common and Vesk