it was an itty bitty teeny weeny

What it means LEGALLY to be a "person"

congested hyperspace lane owned by VorCalipsa but throttled by Vormecetti

a spherical representation of a planet, mostly blue-white ocean, with a tiny green clump of land near the top pole 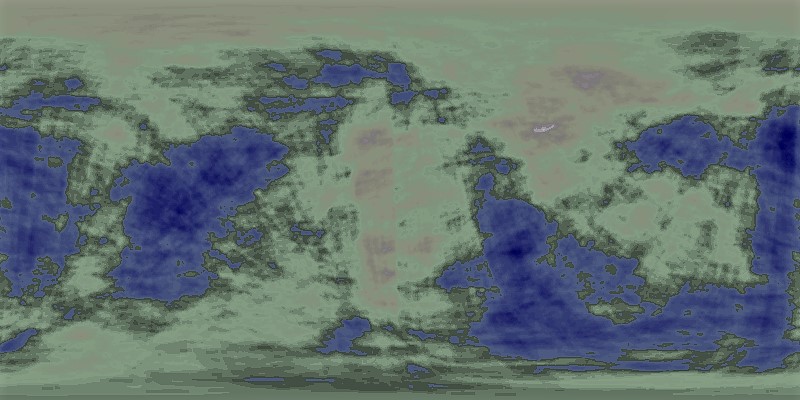 Chris: Can you alter this image to be more brown where the bright green currently is and more grayish-white where the brown and purple currently are? I wanted a map with more altitude to it and I don't know how to do that. If i increase the ice percentage on the image link then it just increases the polar ice cap coverage on top and bottom. Thank you!

A topographical map of an imaginary world that is slightly more water than it is land. It has small polar ice caps at its poles.

The main continent has several elevated areas, including a crescent-shaped area with its concave side aimed southward. In fact, if one were to include the more linear mountain range slightly south, one could imagine the emoticon often called "skeptical smiley" with the colon or eyes oriented horizontally and the oblique slash or mouth higher to the west, lower to the east.

A few inland seas are visible, mostly in the southern hemisphere. The ocean has several islands of varying sizes scattered throughout it.

A rectangular, topographical map of an imaginary planet. The top and bottom edges of the rectangle are tattered as if looking at an antique paper or cloth map which has not been well-cared for. The bottom fifth or so of the map is covered in grayish white, suggesting either that the bottom of the map was damaged or that the southern ice cap is very large and surprisingly uniform. The large continent on the viewer's left covers almost half of the total map. It has a noticeable area near the center of the upper quarter of the total map which has several brown blotches of elevated land, the two largest also having white centers. This map does not show any of the urban developments mentioned in the article.

A zigzag style map of an imaginary desert world. The poles are white, possibly indicating polar ice caps, and a large area on the right hand side has white smudges which suggest the land there has high enough elevations to possibly also be snowcapped. The location of a starport is not indicated.

A zigzag style map of an imaginary world. The top and bottom of each zigzag show that the world does have ice caps at its poles. The top half is mostly water while the bottom half is almost completely land. There is one very large continent and several extremely large islands, but those islands are not really big enough to be continents unless most of the continent has been flooded.

A vaguely topographical map of an imaginary world that is about half water, half land. More land exists above the equator than below. Near the center of the map, land darkens from green to brown to purple, with a big white dot to mark either a raised plateau or a snow-covered mountain.

A sort-of topographical map of an imaginary planet, mostly water, a little land. The continent on the viewer's left has enough brown and purple areas above the equator that there could reasonably be a large plateau there.

Let freedom ring; let the vuptex sing
Let the Sector know that today
Is a day of reckoning
Let the weak be strong, let the right be wrong
Roll the stone away
Let the guilty pay!
It's Independence Day
— ((with apologies to Gretchen Peters for filk-hacking her song))

The war against the "Living Machines" took a long time, despite the Bene Gesserit order's warnings ahead of time; when the Living Machines were finally driven away, they vanished from the known Galaxy completely.

Bene Gesserit mystics arrive in the Tapani Sector with a warning about "the Living Machines".

Procopia System sent its first representatives to the Republic Senate on Coruscant. Several members of House Vorpelagia were recruited by the Jedi Order, and eventually established bloodlines strong in the Force. Tapani nobles frequently travel to Core to do business, and ambassadors forge links w/ important Core systems s/a Alderaan and Corellia.

The Vorkappela Dynasty presided over a gentle and steady decline into regional factionalism. A cadre of military officers in this year staged a coup, and placed the worlds of the Tapani Empire in the hands of a band of reformers.

Clan worlds grew apart and began to rely less and less on a central government. Power shifted from Pelagia to local clan capitals. Early years: numerous clans merged, expanded, fought, and died out. Over trials of eight centuries, twelve houses emerged, each w/ own king/queen ruling over its territories and worlds. These houses exist in a relatively stable state for over 3,000 years.

Warrior prince Shey Tapani rose from House Melantha and unified the houses in a series of bloody civil wars which spanned nearly twenty years. Two houses were destroyed by Tapani during the wars, and a third faltered and was absorbed within a century.

Tapani laid foundations for a regional empire which would last for 6,000 years. Shey Tapani's descendants consolidated the empire over 5,000 years. Sixteen dynasties ruled the Tapani Empire in turn, most of which hailed from either House Vormelantha, House Vormecetti, or House Vorpelagia.

Though he made his homeworld in the Procopia System the seat of his empire, Shey Tapani did little to advance his own house; he was remarkably even-handed in distributing power to the nobles who survived the civil wars. He established a number of universities and research facilities, and imposed a new code of laws and a new calendar (still in use today).

Within two generations, the cultural custom of nobility having the syllable "vor" at its beginning was so important to Tapani society that it was being retrofitted onto all official records and artwork for the founders of Tapani society. By the time Shey's great-grandchildren's generation were learning to talk, they would not have imagined any of their ancestors not being Vor___