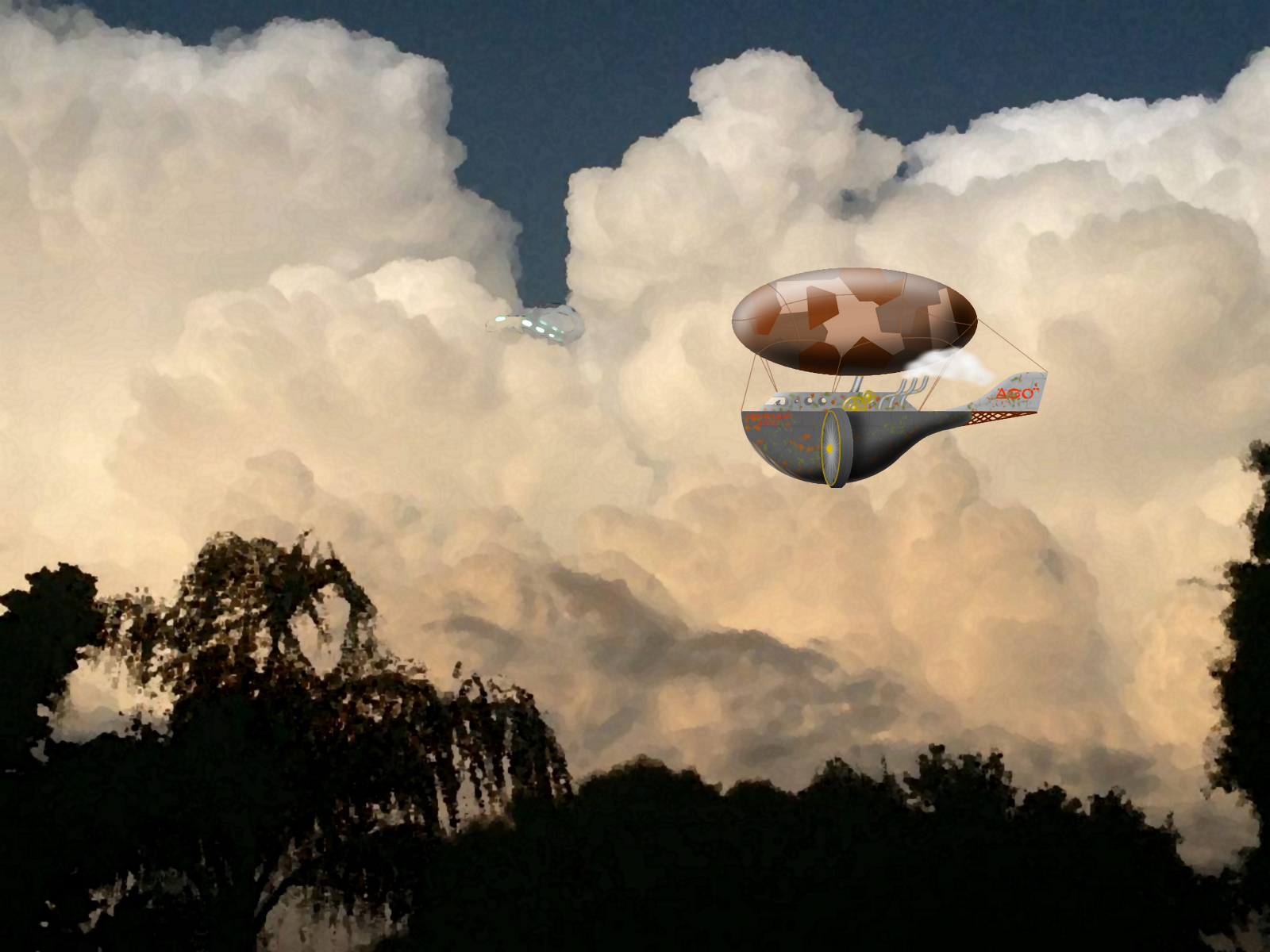 Storm on the Horizon: Part I

Captain Gavis Ðægný had been a damned fool, and the storm gods mocked him for thinking he could outwit them.

Gavis looked out the starboard side of the skyship Þrákelkni's cabin and swore, running a clawed hand through his sandy-colored hair. The cloud eels were fleeing; a definitive omen that the oncoming squall would be violent. The big-eared goblin captain yanked on the whistle that let Shyla know to shovel more dried bisönd dung into the boiler, but he knew it was futile. They weren't going to make it around the wall of clouds that had been steadily gathering strength for the past half hour.

The cloud bank was quite beautiful, illuminated in a palette of bright orangey white by the last rays of the setting sun. But beneath the captivating facade, the front flickered restlessly with lightning. The thunder was unrelenting now, an ominous low growl that varied in intensity but never faded from hearing.

Under these circumstances, the proper procedure was to land and wait out the storm. But they were too far from Kellaskali to turn back without wasting most of their remaining fuel, and not close enough to Osprey Falls to put down anywhere with proper skyship landing facilities. To make matters worse, they didn't have enough gas to pump into the float to get them above the storm. That left them two options: either putter around out of the way of the front and wait for it to pass, thus wasting fuel; or gun the turbines and try to fly straight across the path of the thunderhead, and hope to make it all the way over before the storm overtook them.

Gavis had gambled on a direct run.

And now, he was going to pay for it.

"Jaevn," he muttered over and over, cursing himself for his own stubbornness. "Aisó!" Gavis barked. "Holler the crew and tell them to get below and secure everything!"

His first mate, Aisó Malago, perked up from the rear of the bridge. The dark-skinned elf was a good foot and a half taller than his lighter-hued goblin captain, but was an obedient sky-sailor and trusted Gavis completely. He nodded and bounded over to the wall of open-ended pipes, gears, and levers. He heaved several levers and shouted into the largest pipe: "All sailors belowdecks! Batten down hatches and secure all loose cargo!"

The message reverberated through the pipe system and was blared out all over the ship. The crew knew they were in for a hell of a ride.

Out on the deck, an elongated black shape twisted amid the ropes and cables that lashed the ship itself to the massive gaseous float that kept the metal gondola aloft. Skarle Glatiir, the skyship’s rigger, made his winding way across the wires, checking the knots to ensure they would not slip during the oncoming turbulence and send the crew of six and their valuable cargo plummeting to the unforgiving earth. His climbing was quick and confident, but not without care; the rigging was a comfortable environment for a gnoll born in the tropical tangle of Eiakker.

Skarle finished his rounds and slid down the mainstay line to the deck proper. After one last glance around, the viverrid saluted his captain through a cabin porthole, then scampered down a hatchway and locked it tightly behind him.

The sun was below the horizon now, still shedding dim light on the world but not enough to maintain the clouds' artistic veneer. Stripped of its soft colors, the storm's malevolence was now plainly visible as it engulfed the stout little airship. The growl of thunder steadily intensified, as did the wind. Rain suddenly lashed at the windows, growing ever more violent as the the squall overtook them. Lightning flashed vigorously now.

Dark shapes flitted in and out of obscurity, clustering around the branching lightning like moths to a flame.

Gavis muttered a string of oaths in Crown Skreitung that his mother would have fainted at and gestured to a heavy-looking lever on the rear wall of the cabin, near Aisó's seat. It looked like it controlled something quite formidable, but dust had settled upon it in a fine layer of age.

Aisó followed Gavis's finger and blinked his deep brown eyes in surprise. "You think we'll need it?" he asked incredulously.

Gavis, a goblin of few words, simply pointed to the dark shapes that swarmed through the turbulent atmosphere to the Þrákelkni's starboard.

Aisó's eyes widened in shock. "Oh... oh my Cygnus... those haven't been seen in South Eren in ages!"

"They're here now," Gavis pointed out gruffly. "Which means two things: one, this is a hell of a storm; and two, we need the Repeller."

"Right," Aisó agreed. He hastily scurried over to the lever and pulled as hard as he could.

Slowly, the ancient mechanism slid towards the elf, groaning.

A panel of hull at the bottom of the ship hissed as it sunk inwards. It ground open slowly, revealing a dark interior.

Aisó flicked some smaller levers. Gears shifted around noisily and settled in a new pattern. The first mate grunted as he heaved the same large lever in the other direction. It complained, but drudged obediently to port.

A frightening mechanical clamor emanated from the gaping hole in the hull.

A strange-looking cannon emerged from the gloom, accompanied by the moaning of mechanisms not used in years. It settled into place with a reverberating thunk, jutting out of the bottom of the hull like a spine from the back of a chupacabra. It was now no longer just a cannon, but a whole clockwork armillary turret complete with a gunner seat.

Gavis looked at Aisó and beckoned him to come take the wheel. "You steer, I'll shoot."

Aisó gulped nervously. "You sure, Captain? We haven't used the Repeller in years. Wouldn’t Glatiir be more suited to-"

"I'm the only one here who even remembers how to operate it," Gavis replied, wrapping his scarf tightly around the lower half of his face and securing his flying hat. "Don't worry about what happens to me. You damn well keep flying at full speed until the Þrák is clear of the storm, understand?"

Gavis grinned beneath his scarf and saluted in return. Then he pulled his goggles over his eyes and marched determinedly down the stair-ladder to the lower levels.

As Gavis navigated through the corridors and amongst the machinery, he focused on remembering what he'd learned about the kylfulgors. They were mysterious creatures in the first place, only ever seen during powerful electrical storms. The last time one had been sighted anywhere on the continent, it was during the Storm of 736 that raked through the South Island and practically toppled Treibaen.

Gavis shook himself and refocused on dredging up relevant information. He recalled that they were notorious for attacking anything that entered "their" storm, regardless of how large the invader was. They'd taken down entire sky galleons. Then the famed mage-engineer Hdromr had developed a device that successfully deterred the creatures.

The Repeller worked on the basis of electrical pulses, though Gavis couldn't quite recall exactly what the mechanism entailed. But that didn't matter. All he needed to remember was how to operate it. He concentrated, and the information flooded back into his mind. Foot pedals to turn vertically. Targeting grips to turn horizontally. Triggers to fire. He recalled the most important instruction: aim for the beak. He wasn't entirely sure why, but that was the most effective way to deter the monsters.

At last the captain reached the lowest level of the ship, and stood at the brink of the hole in the hull steeling his nerves. The wind howled like a chorus of bunyips. The thunder was an infinite orchestra of percussion, accompanied by the triangle tones of hail battering the hull. Lightning flashed chaotically, reminding him of the time Skarle –also the Þrák's spotlight operator– had drank far too much coffee one night before watch duty.

Then he heard what he feared most.

The screeching of kylfulei, growing closer.

Without further hesitation, Gavis tightened his scarf and slid down the metal ladder into the turret, carefully avoiding the rings of the armillary sphere that gave the turret its mobility. The goblin strapped himself into the seat and gripped the targeting controls, a grim smirk on his face. "Tuola ne päällä, tordi hrogn," he muttered threateningly.

An angry squawk from his left nearly deafened him; evidently the creature did not appreciate being labeled as a denizen of the Netherworld. Gavis swung the targeting grips to the right and pumped the foot pedals vigorously. The turret lurched, squeaking painfully as it rotated to face the threat.

The goblin had a split second to take in the details of the creature before his reflexes took over and he fired on it. It was most certainly a kylfule; the toothed beak and membranous wings were a dead giveaway of that. Its coat of furlike pycnofibres was patterned in black, white, and grays and its beak gleamed metallically, crackling with electricity. The beast's blue-white eyes flashed menacingly.

"Syöðä aivalður, alhanári!" Gavis shouted over the screaming wind and roaring thunder. He clenched his fists on the triggers. A screaming thump emanated from the cannon as it flung a concentrated electropositive pulse directly at the kylfulgor's metallic beak.

The creature was knocked back fifteen meters by the blast and free-fell several meters as well; it was so stunned by the pulse that it stopped flying for a moment. Then it regained its aero-stability and flew off to its flock, presumably for reinforcements.

Gavis swung around, tracking the beast as it drove its flock into a fury and led them in the Þrák's direction. A hundred or more kylfulei, enraged that something had dared enter "their" storm, screamed as they dove towards the airship, beaks sparking and claws outstretched to tear and bite and shock. Gavis' eyes grew wide as he watched the flock, a dark, almost liquid mass, flow towards him. He muttered a curse that even the most drunken sailor would recoil at and gripped the targeting grips with knuckles white from tension. He squinted and began firing as fast as the Repeller could handle, as the demons of the air fell upon his ship with destructive intent. 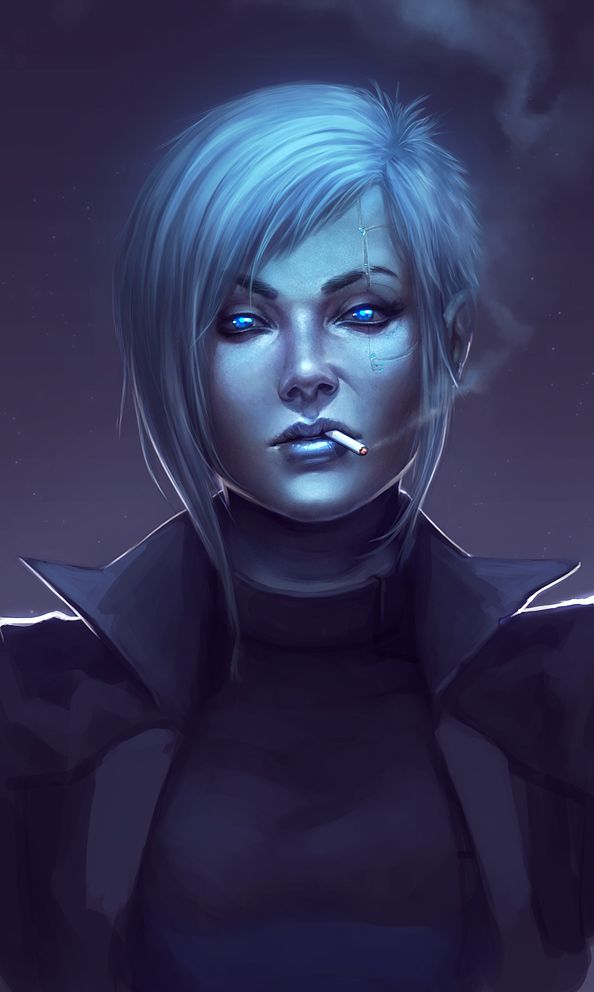 Great descriptions and pacing. The action ramps up nicely and you finish with the perfect cliffhanger! I can just see the kylfugl diving down on Gavis. The way you describe the Repeller is my favorite, it matches the steampunk feel of skyship and adds great tactile imagery to the piece. Well done!

Thank you so very much for your feedback!! I'm glad you enjoyed it! I was particularly worried about the pacing; I'm super pleased it reads well!

Uh oh. I don't think they're coming out of that live...   I agree, very good descriptions! Nice use of the tooltips, I never thought about that. Don't worry about the pacing. It's good, realistic. Went from bad to worse, and the atmosphere is tangible from the beginning. Nice read!

Thank you so much for your feedback! I'm super happy you liked it! :D

I really enjoyed this story. The use of the tooltips are nice.

Thank you! :D I felt using tool tips to translate would add to reader comprehension without disturbing the flow of the story.