A HEART OF STONE.

Heartstone is the trade name given to a rare, transparent or translucent, reddish crystal formation. It was first discovered by a Lord Kriezler Stadt upon setting down in the fortress he had built in Authusia. From this jewel, and the commerce of it, came the name of the fort now inhabited by Lord Kriezler and his descendants until the early Age of Rebirth: Heartstone.   Within the Kingdom of Authusia, most people use the heartstone as a simple currency, albeit a very expensive one, to be exchanged for other goods or forms of currencies. Most Authusian shops have a specialist on site, responsible for the appraisal of the currency, to determine if they are of the variant accepted by their economical system, and if they fit the determined parameters.   Many outsiders prefer to attach it to strings or simpler jewelry, and these are relatively common in other Somnium nations, coming in several different forms and styles. In Authusia, however, this jewerly tendency is most observed by hunters, who can use a quick glance at their gemstone to tell if there are soul devourers nearby.   To be caught with a "false jewel" - one of those found elsewhere than Heartstone Fort - is a grave crime. At the meantime, devourers have learned to look out for humans who wear these stones as pieces of jewelry within Authusia - as that is a telltale sign of one of the few remaining hunters. The hunters, however, learned quickly to hide the use of the gemstone while maintaining its usefullness.

Despite the natural form of heartstone inside the mines of the homonymous fort, the gem is always cut into cabochons, in order to make it easier to keep track of the jewel. As soon as they are brought to the surface, a heartstone looks rather chaotic, with streaks and colors in every direction. It displays a gorgeous blood red coloration, and seems to shimmer as if there were actual blood pulsing inside of it. Not two stones are the same, though the ones that reach the market are relatively similar due to artificial selection by the Authusian authority.

Although the heartstone beauty is extreme in its natural state - that is, when it is not being influenced by chronite radiation - such a condition is practically impossible to witness, as chronite radiation is present, at different levels, throughout the surface of Somnium. As a result, the colors contained within the stone appear to be constantly flowing, shifting, or pulsing, depending on the intensity of the radiation. While the reason for this is unknown, hunters have made good use of it, as detectors for the presence of devourers in disguise.

For unknown reasons, this particular variety of stone has only been found beneath the grounds of Heartstone Fort, and nowhere else. Merchants claim to have located similar stones in composition, origin and appearance in the Denisoveese region of the continent, though these rarely attain the same valor of the original and are regarded as falsifications. Thus, the only recognized influx of truly valuable heartstones comes from the Authusian Kingdom, doing nothing to hinder their finances.

Different types of heartstones occur in various geological environments throughout the world of Somnium. It is believed these stones are more likely to form naturally when there is a sufficient amount of pressure and heat applied over a soil rich in aluminum, such as the one found in Heartstone Fort. High pressure and heat combined breaks the original crystals and forces them to recrystallize, being more stable and resistant in these conditions, giving them their characteristic resistance.

As soon as it was discovered, people knew it would be valuable. It has been distributed in various forms over the years, and the current cabochon form it is cut and distributed in is relatively new in the grand scheme of things. It is used mostly as a form of currency within the Authusian Kingdom, tied with religion and the sovereignty of the Authusian royalty. Hunters, after discovering about its capacity to react with Chronite radiation, have been using these stones for centuries in order to find and hunt down devourers in disguise.
Heartstones, observed in their currency form as commonly used in Authusia. The bigger in size, the more valuable. 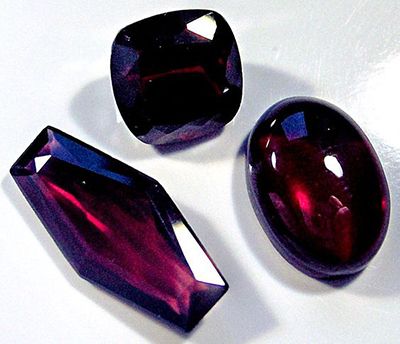 Value
Highly valuable both inside and outside of Authusia
Rarity
Outside Authusia, its distribution is controlled, making it rare
Color
Red
Common State
Solid 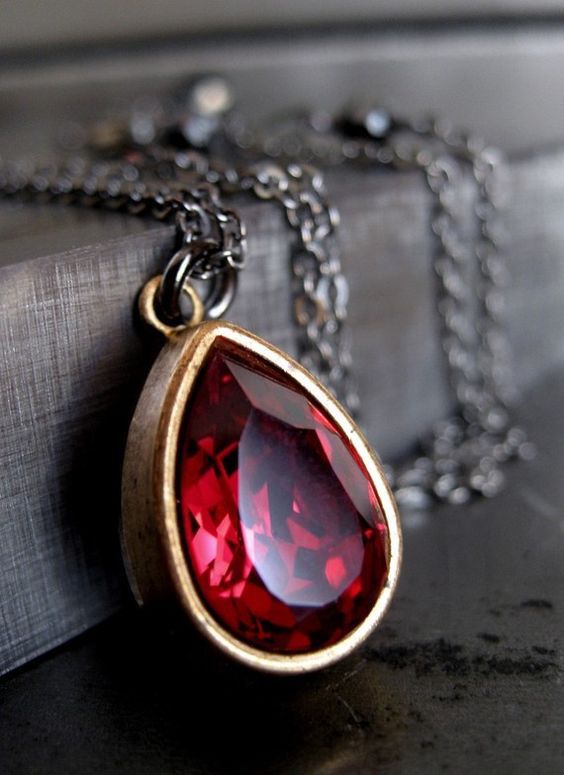 A pendant made from heartstone. While it is relatively common to wear one of these outside of Authusia, it is almost guaranteed to draw a devourer's attention if a human wears this type of gem.