Legend
If you haven't read Drawing yet, read that as I won't be going over the basics of what drawing is but more of how it works and the indepthness of the creating a drawing.
Drawing in all essence is from the soul. In order to work properly a drawing has to have some form of Soul Qi, it also requires energy. This is why weapons or drawing gauntlets are often used, they convert the kinetic energy from movement into energy allowing you to draw from that rather than the body heat from yourself and risk killing yourself by pulling too much.

In order for a drawing to be made at least one of each of the required Qi is needed to form the drawing. You will act as a conduit for the energy fueling the drawing, as you pull in energy you will recognise it, the amount of energy you are pull in is referred to as Ey. In order to determine how much energy is required the basic formula is

Where Ey is the energy needed, q is represents the amount of Qi and x is the amount of Qi Factors present. The Drawings then will require the same amount of Ey to continue executing. Any additonal energy is then used to increase the strength/effect of the Drawing.
The below Drawing would require 60Ey in order to start and a constant supply of 65Ey while =. There are 5 Qi used and 13 Qi Factors present, 5*13=65 there for 65Ey is required. If a Wolf was to use the kinetic energy from swinging a sword this would produce varying amounts of Ey for them to use, they would focus the energy through themselves but due to varying caster strength and the etchings on a weapon these amounts can vary. The same can be said for utilising the heat from a fire, there are so many different variables that can effect the amount of energy produced.

Drawings can take any shape, as long as the Qi are all joined together. There are a few basic parts of a Drawing that are needed. The Qi Zones, Soul Bonds and the Joining Modifiers, these are all required for a Drawing to work and are referred to as Qi Factors.

Soul Bonds Soul Bonds are the lines that connect the Zones together. They're made from a small amount of soul qi of any kind, they don't effect the Drawing itself, only join the zones together.

Joining Modifiers The joining modifiers are additons to Soul Bonds that dictate the flow and effect of the Qi. 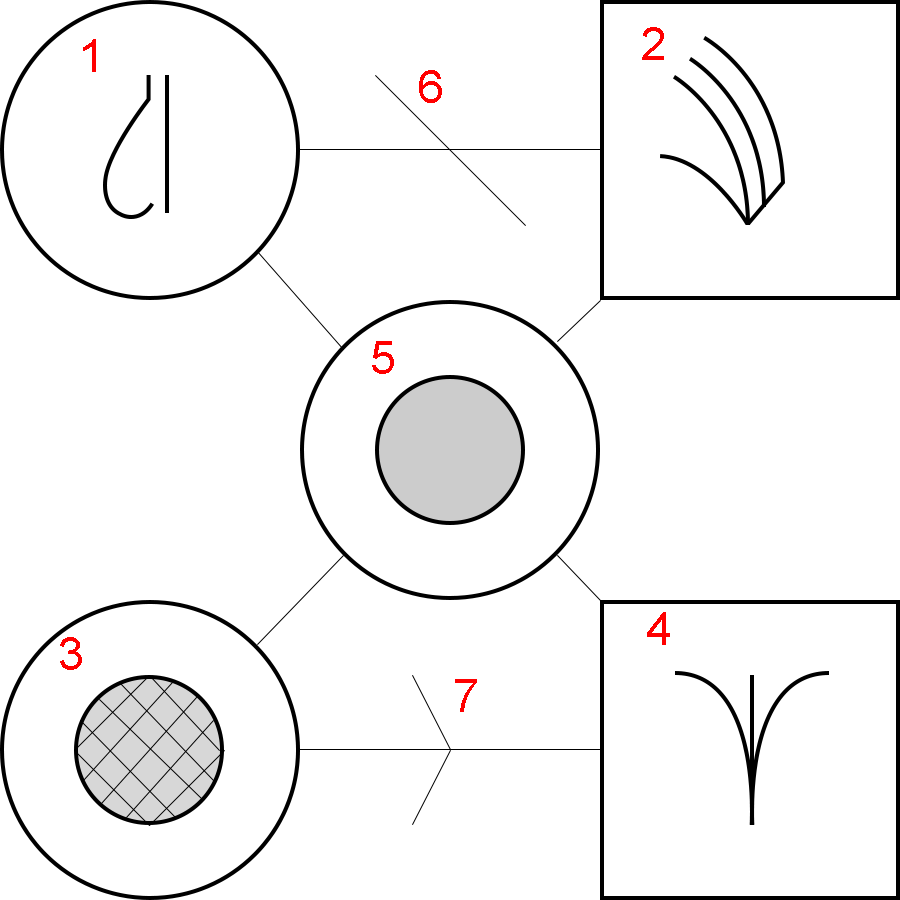 The above diagram is an example of a Qi for healing a cut.
Leena - Qi for blood
Lura - Qi for flow
Covra - Qi for flesh/skin
Gru - Qi for growth
Sol - This is where the Soul Qi would go.
Null modifier
Direction modifier
In the diagram Leena(1) and Lura(2) are joined and have a Null modifier(6) between them. The outcome of this would be that if used on an area that is bleeding, it would prevent the blood flow. Similar to applying a tourniquet to a limb, except more effective. Corva(3) and Gru(4) are joined with a Directional modifer(7), the result is the Qi for skin is being flowed into the modifier for growth to make the flesh regrow together on the cut. Sol(5) is used to power the whole process, you would need to funnel Soul Qi into the drawing to power it, along with energy. Now that all of this is made in front of you it's not going to do anything as it has no target. This is the hardest part of Drawing, you need to focus on the target for the drawing. You need to focus your mind on what you want the Drawing to effect while also concentrating on pulling the energy to fuel the Drawing. This get's progessively harder the more Drawings you're using at the same time, this is due to you having to concentrate on multiple different factors simultaneously while also pulling the required amounts of Qi for each drawing.

There are a few limitations to drawing, the main one is that you aren't able to create something from nothing. Matter just doesn't work like that, you are able to change matter from one form to another but it's extremely difficult and only the Forgotten currently have the level of power to perform this. The only way a Wolf can currently do this is to pull too much Qi from something; this is greatly different from what the Forgotten can do.

Everything has a price, everything is made up of Qi and uses Qi to sustain itself. If I were to pull too much Qi from something it would change, pulling to much Qi from something like a plant a variety of things could happen, ranging from leaves falling off to the plant straight up dieing. This is an easy but unpredicatable way to clear things like boulders or trees, Drawing is a transfer of energy and life. You need to have something to draw with so we use the essence of life itself in order to manipulate the world around us.

The final limitation is your sanity. When you start down the road of Drawing you learn early on this is a dangerous route. Your Rhean, your inner magical potential, is like a parasite. It wants to be in control of the host body, and will be fighting you at all times. This is generally fine for most people as blood lines are so mixed that magical potential is pretty depleted, this means Rheans as a whole are generally weak among the Wolves. There are exceptions to this and there are quite a lot of Wolves with strong Rheans. For these people they're constantly fighting their Rhean in some capacity, it trying to take over.
There is a larger issue however, when you tap Qi and begin Drawing the fight becomes greater. As you're tapping into your Quean in order to Draw the Rhean will be also trying to get at it. An easy way to see Quean is your Soul, the Rhean wants this and will try to take control of it.

Once you have a better grip on Drawing and Qi you will now see the symbols you've learnt for the Qi rather than a colour blur in the air. If you come across a Qi you haven't learnt yet you wont see the symbol but instead the colour.

The basis of everything is Pure Qi, it is the foundation of everything and is used in some of the most advanced forms of drawing. In order to convert regular Qi into Pure Qi there is a common formula used.

Where x is the amount of regular Qi being converted. 1 Pure Qi is equal to 13 parts Regular Qi, this is due to something called Qi Leak. Qi Leak is when Qi is leaked back into Solivity during a conversion process.
Drawing