Solaris    Appendices    Technology      Data Crystals
This article is a stub . It will be expanded upon later.
It started with a bang and continued as a chime. The stars sang sweetly, and the song recorded itself deep in the hearts of the protonic planetoids. Millenia later, it rejoiced to be unearthed, and to us it sang; let us carry you further than you could ever dream. Let us be the bedrock for your wonder. Let us, let us.
Data Crystals form the backbone of modern industrial technology. Discovered independently multiple times, they are now widely used in propulsion, energy storage, and as electronics substrates. Crystal strains that are used for propulsion provide momentive force when energy is applied, while storage crystals preserve energy patterns that are applied to it.   Research continues on improving efficiency, lowering costs, and extending the lifespan of crystalline technology. 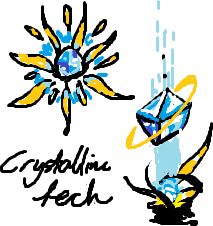 Data Crystals come in all kinds of colours. Astrallite ranges from pink to purple to blue, while Aurorite is typically green. Some rarer variants of Aurorite are blue or red.

Data Crystals produce a gentle sound as they work. It is often described as a gentle hum or a chimimh.

The Data Crystals used in engines are highly radioactive and require well-maintained radiation shields. The data crystals used for personal tech are either inert or small enough for the radiation to be negligible.
Crystals are defined by their form and their properties. Crystalline structures are geometric patterns all the way down to the molecular level. These lattices of perfectly flat facets serve as an ideal base for etching layers of electronic circuits, and lend themselves well for storing data or other patterns.   All crystals naturally absorb radiation, including light, and re-emit the energy as momentum, heat and different forms of radiation. Small crystals have a tendency to hover if unencumbered, and specific strains of crystals are engineered to serve as reactionless propulsion on spacefaring vehicles, taking advantage of the momentum produced.   It is widely known that entirely enclosing crystals tends to degrade their effectiveness. Many engineers firmly believe that the crystals themselves operate better when enclosed in beautiful cages of gold, silver, or other precious metals. The latter tendency has been explained by resonance between certain geometric patterns and metals, rather than any kind of aesthetic sense on the part of the crystals.

Data crystals are typically grown from a seed crystal. Astrallite and Aurorite are commonly formed by placing a seed in the auroral zone or in outer space. They capture solar winds to synthesize additional material. It is also possible to grow a data crystal in a laboratory. A seed crystal is placed in a mineral-rich solution and irradiated with a set of wavelengths that simulate the solar wind. Laboratory-grown crystals tend to be far more expensive, but take much less time and tend to be more uniform than astrallite and aurorite.   Crystals can also be found embedded in the crust of planets, moons and asteroids. These crystals are closest to astrallite in terms of properties, and grew in interstellar space before being accreted into the Solar System. In the modern day, crystals are usually used as seed material as they generally have inferior properties to engineered strains.

Answering: "Α material only harvestable from nature"
Visit nnie's Competition Page Check all other answers to this prompt Competition Homepage

I love how you've described this technology and come up with lots of interesting and fun details while still keeping it grounded in actual crystal chemistry <3   "Crystalline structures are geometric patterns all the way down to the molecular level. These lattices of perfectly flat facets serve as an ideal base for etching layers of electronic circuits, and lend themselves well for storing data or other patterns." This in particular sold it to me, as well as the crystal growth in the lab, which is something I've actually done before XD   I love all the fancy colour and sound emitted by the crystal, and that some people apparently think that they have an aesthetic sense XD   Great article!

Thank you! It was interesting to learn about crystallography, and then have fun fictionalizing it. I was really surprised that there was such a thing as seed crystals, it led me down a fun rabbit hole reading about Kurt Vonneguts "Cat's Cradle" too. I love research!   It's so cool that you've actually grown crystals! :O

Wow. I'm delighted how I was pulled into the descriptions of astrallite and aurorite and harvesting the crystals.   I don't know anything about such things--so this was an adventure for me.   Thank you for that experience!

Thank you! I didn't know much about crystals before researching this article too! It was fascinating to learn.

This is great. My favorite part is that they sing!