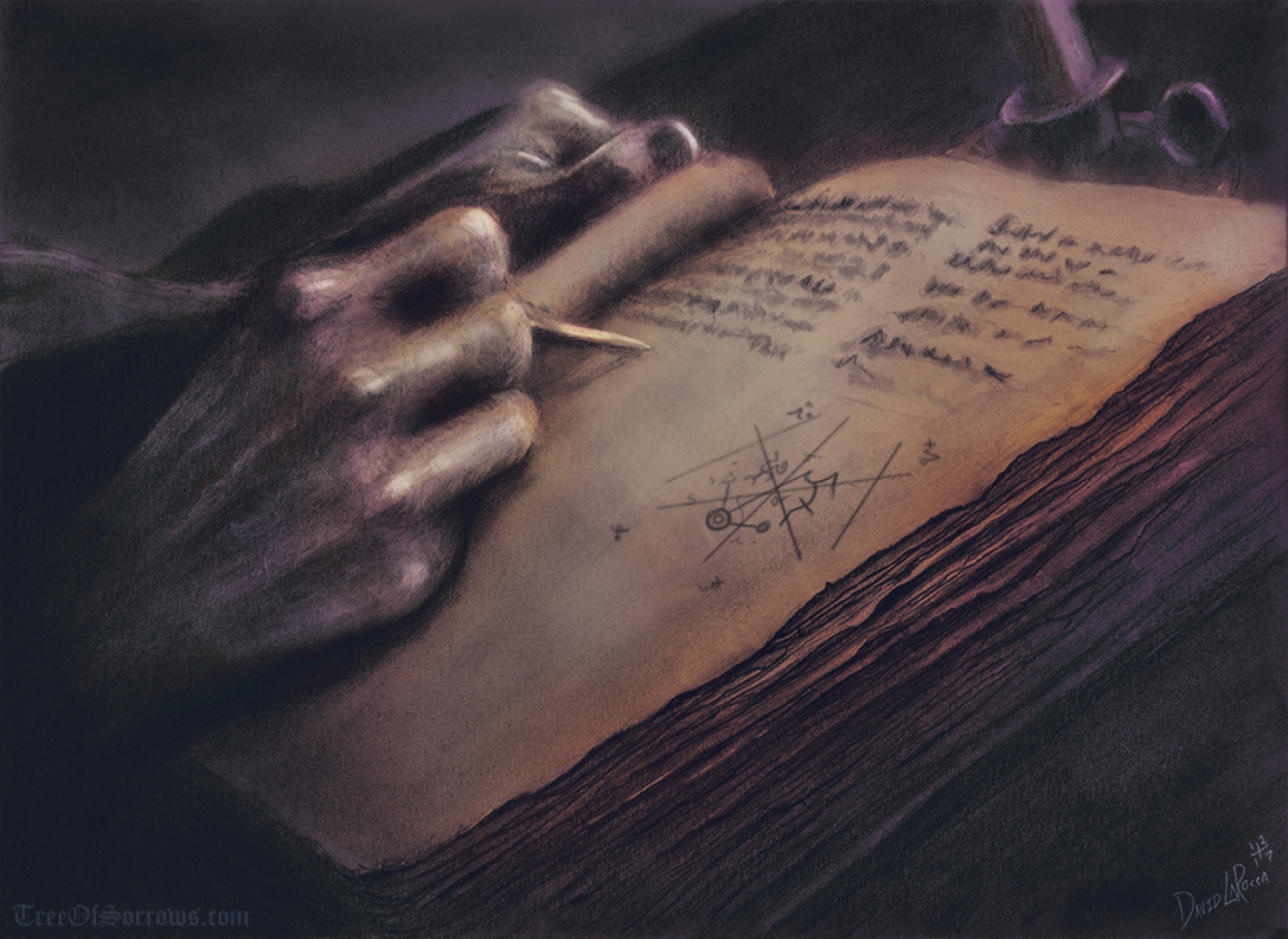 With pen and paper: books worth whole legion

Ahead was unknown, but astern we couldn't return. Ahead was life, but behind only death, and her name was Erdsutar, daugther of Nothing. Many of us died in battle with demons and many of us were left in wastelands.
— Bea Uaeit, V century bef. Solar Reign

A long time ago new tribes came to Rotenia and gave their name to this land. It was age of heroes, glorious warriors and chiefs. Age of feltas — oral stories about adventures and fates of the greatest people: about Sun, who created humans and destroyed a dead men army of Halmardrig, king of underworld, about Eudain the Brave, leader of rotens in deadly fight between humans and cold, about Istra, who gave a new life to rotens and his descendant Ædra, famous by battles against saleahes.   The last two feltas, written down by unknown author as a present to High Chief Halhlata, became a symbol of rotenic culture, core of their history. The book called «Bea Ueit» or «Age of Fire» describes whole history of rotens, starting from all seven Solar generations to Ædra's death.   Story is focused on chief Istra, direct descendant of Sun, who leads rotens to their new land. Their previous homeland — Rypea — was devastated by Erdsutar, spirit of plague and famine. After hunderd years of wandering, rotens finally reach a beautiful garden, a land promised by Sun. But this land is already inhabited by people, called themselves «sons of Saleah». In a bloody battle, with help of gods, rotens are achieving victory and establishing their new kingdom. After death of Istra narration goes to his descendants, where author describes long war with saleahes and invasion of other tribes to rotens land. Finally, chief Ædra leads rotens to their last battle, conquering new lands. He dies in fight and get burried under the new kingom's capital. Story ends with great procession in honor of great heroes.   The felta defined a religious statements, that became basics of solar cult and idea of global predominance. Brought to all minds, it built the national identity and laid the foundations of future sol-centristic Empire.

He spoke to you, but you didn't heard. That enlightenment was enough for book, yours is being fed by heart. The way is tortuous, but passed. So said the Lord to me.
— Book Third, Ilamardan the Foresighter, 712 Reign of The Sun

What book can keep a whole empire in fear? There was two in history of Solar dynasy. Both were written by Ilamardan the Foresighter in 675 Reign of The Sun. They were parts of hypothetic three-volume compositon «Ba'ann ar Goosas» — «Book of Coming». They were published as a single manuscript, which is stored at Library of St. Æstafee in Lym to this days. During author's life, books weren't so popular as 200 years later in Dark Ages, when ubiquitos copying of them started.   Above all, Ilamardan was known as prophet and gnostic. He was a member of calignoistic flow at Northern Rotenia and advanced some ideas of Manesism. In consequence of this, he was expelled from many cities and, inherently, he was wandering from one side of Empire to another, telling prophecies and warnings. Later he starts writing first two volumes of «Book of Coming». These volumes were rather compilation of inconherent thoughts about Manesim and Calignoism, than structured telling. However, aspects of future were raised, in particular a Great Plague (840 - 862), Dark Ages (846 - 901), death of Crimson Sun (1122) were predicted.   Anti-church propaganda has led to Ilamardan's arrest and gouging out his eyes. However, he continued to prophecy and got nicknames Blind Guide and Madman. In 682 he was imprisoned by act of Gracious Sun and died in jail.   His creations became well-known in Dark Ages, when prophecies started to come true. Empire plunged into a chaos. The copies of manuscript were literally everywhere, among others there was also a foreign propaganda. People tried to find other prophecies in book, somehow to interprete text on their own. There began to appear new plagiarists and followers of Ilamardan. All his books were banned and almost all copies were destroyed. Original remained saved and was shipped out to Lym and placed in library.   Also, a thorough search of a third volume began, which ostensibly was written during Ilamardan imprisonment. It was supposed, that third volume conains a key to the whole book and encrypted message in it. Search was unsuccessful and all founded fragments were just mad thoughts, whispered by some Lords, as author mentioned. The results of research provided by magistrate of Templar Control stated, that all fragments are fabrications. That was the end of «Ba'ann ar Goosas» history.

I am a light-bearer, emissary on the Earth and God of yours, that was by Kais stinged and clouded by plague. Those, who believe, are blessed!
— Prescriptions, 3 : 1

For thousands of years Sun has been moving through sky ocean, replacing the Moon, giving a light. The cosmogonic myths of old rotens were strongly settled in minds of empire citizens, maded the Sun an object of theirs worship. Finally, all this believes, stories formed a strict pantheon of reverence of the One, who created the world, and his emissaries, that helps people in fight with evil. With prayer to the One all inhabitants of newly formed empire waked up and went to bed. It's been for the first generations of Solar kings.   Everything has changed after appearance of a man, who later would be know as Saint Æstafee. Borned in Rypean Mountains, he started his way of a prophet in a heart of Rotenia, glorifying and prasing the Sun, telling about his duty as a chosen by god and a power of his patron. A new flows of anti sheyem worship as a responcet to increasing manesism threat were good for the Brightest king of rotens. He made Æstafee his favourite and sponsored his pilgrimage. With Æstafee's help he was able to establish control over neighbouring provinces and declare himself an incarnation of Sun, beginning an era of Solar emperors.   Æstafee went on long pilgrimage, which ended with his death in Latera. The result of travel were «Prescriptions» — guide, given by Sol to all people trought his prophet. «Prescriptions» became a base of sun worship cult not only in the Empire, but in the other parts of a continent. In Solar Empire this book had been considereed as divine source and law. Official religion was changed, the power was given to tolerant Sun followers. Their power is great till now. Æstafee earnd a status of a secong messiah, but at the same time was a catalyst of all future religious disasters.

Interesting lore and good use of space. I especially like the inline images at the end and along the side--they lend an organic, in-text/in-world sense to the text.

The starting quotes really set up the feel of this article it's great.