Alkaia was born to the tribe of Amazons that live on the highly isolated island of Themyscira, which is located in the Alantic ocean. Alkaia started learning the arts of war at a very young age from her mother, who was one of the top strategic warriors of the tribe. Under her mother's tutelage, she began training in the art of war at a young age. She shoot her first arrow at the tender age of three, and she picked up her first sword at the age of five. At six, she entered the temple school where she was taught about their religion, mathematics. She also learned about the wide world outside her island home. She learned that the Amazons had migrated all across the world explaining why so many different cultures have stories of warrior women. As they migrated over the earth, the Amazons had lost some of their legendary weapons. Alkia dreams of visiting these distant places and bringing the objects home again. After her temple schooling ended as a young teenager, she entered the military training that is required of all warriors where she earned a position as one of the elite guard. The temple of Pluto selected her to represent the Amazons when Pluto's associates started searching for help finding out who murdered the fates. 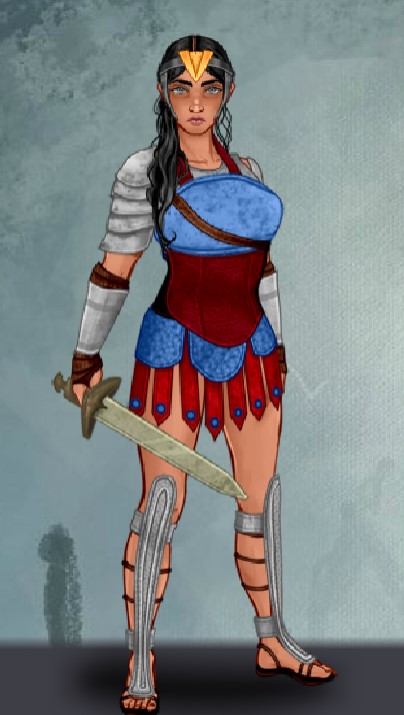 Alkeia is sent to investigate the scene of the crime where the fates were murdered. Alkeia is looking for Charon to pay her toll to get to the place she needs to be. Instead, she is stunned to find a train station instead. She approaches one of the people on the platform, and she asks where she can find Charon. The person she asks is a Minotaur wearing cargo shorts who has a Texan accent. The Minotaur informs her that she has to take the train instead of finding Charon. She finds out that it is now a train route that is located over the river stix, ironically called the stix. The Minotaur gives her a copy of the schedule for train, first in English and then in Chinese. Alkeia is flustered since this is not what is taught in temple. The railroad is subsidized by the other death gods who pooled money to pay for the train. The train goes to all the areas of the underworld, but the part of the underworld where the dead are located are separated from the guest area. Elysian fields is a part of the city of Pluto, but it is not accessible to visitors. Alkeia climbs onto the train and takes a seat on the train.   She gets off the train to see a gigantic building that is made out of glass and steel. She gets into line and finds that there are several booths outside the entrances to the building. She waits in line until she gets into a booth. The booth is manned by a young girl in her twenties. She asks what she is here for. She has her hands scanned , and has a gun scanner do a iris scan. She also has her first photo taken. Afterwards, she is given a lanyard with her id to be used to enter the building. She makes her way inside the gigantic building to find where the fates were. She eventually sees a man wearing a sandwich sign announcing that was the location where people investigating the fates' murder. Around the man is agroup of different types of people including the Minotaur from the train.She also meets a satyr who is wearing bootie shorts and a Hawaiian shirt whose name is Henry. She states that he dressed strangely for a follower of Dionysus. He makes a point to ask her if she is racist or not. He also subtly insults her fashion sense, which Alkaeia is oblivious to since she is considered to be wearing everyday warrior wear. The Minotaur apologizes on the part of Henry. After her run in with the Monotaur and Henry, the saytr, Alexander finally catches up to her.