“We join against humanitarian oppression imposed to non-humans by the members of Mage’s Brotherhood. Against the unwritten rules that block both humans and non-humans from became mages unless they are born in a city where exists a Mage University, or are adopted by one. Against the written Law of Exclusion, which is systematically used as an excuse to destroy anyone who opposes the humanitarian tyrants, while at same time is ignored by the mages when convenient to their interests. Against the civilized human cities of this world which are no more than puppets used by their Mage Castes. All members of Accord recognize the need of protect the Vortex from irresponsible and selfish manipulation, and repudiate any attempt to open portals between Universes or invert the natural direction of the Vortex whit the purpose of leave this Universe. We do not accept the banishment of Sciences and of technological advancement to be an effective way to protect the Vortex, since experience prove magic can circumvent this limitation (as it did in the caves under Shirshan). We also reject the illogical assumption that the Exclusion Law is necessary to avoid disastrous uncertainty, the opposite is true: keep the residents of Sharitarn in retarded state of technologic development fragilize us all. Humanity is an important part of talking community on this planet, and will always be. However, the native humans of Sharitarn have no more right to set rules for all us than any other talking specie. Therefore, the Magic Universities_ essential for the complete magical development of individuals and nations_ must be accessible for all nations, humans and non-humans.   By this Accord we vouch loyalty to the common goal of open the Mage’s Brotherhood for all and abolish the Exclusion Law. To replace the legal instrument for another, more rational and compatible with reality, where magic and technology will be equally admitted and regulated.   From this day on, until the fully materialization of our common goal, the affiliated members shall provide shelter and hospitality to each other. Grant safe passage through their territories, and material help in the limit of their possibilities, to any member of this Accord who evokes it in private conference. Knowledge and training shall be shared in partnership, following the spirit of this document.   No hostile action will be made by any affiliated against another member of this Accord without previous consult to representatives of all parts, and fair justification will be demanded. Such consults will preferentially happen at Night-Swimmer Peninsula, on Loveletter Castle or another safe shelter provided by the Poet. A council of representants will be installed permanently in the Peninsula, as guests of Poet’s Court, and will address any conflict of accusation based in this Accord as soon as possible. No hostile action between members of this Accord will be taken before 9 days after the case was presented to the council. All terms in this document are secret, and cannot be invoked in public. Sigils will defined by the parts, and periodically changed. Only individuals who can protect their own minds against Mind Spells of a Mind Wisper Archmage or those who can make use of equivalent magic protection can be entitled with the secret. And any agent who knows that Accord exists will be destroyed if necessary, to avoid the premature revelation of our common initiative.”         Those are the initial words in the Accord of Loveletter. They synthesize the spirit of this document. 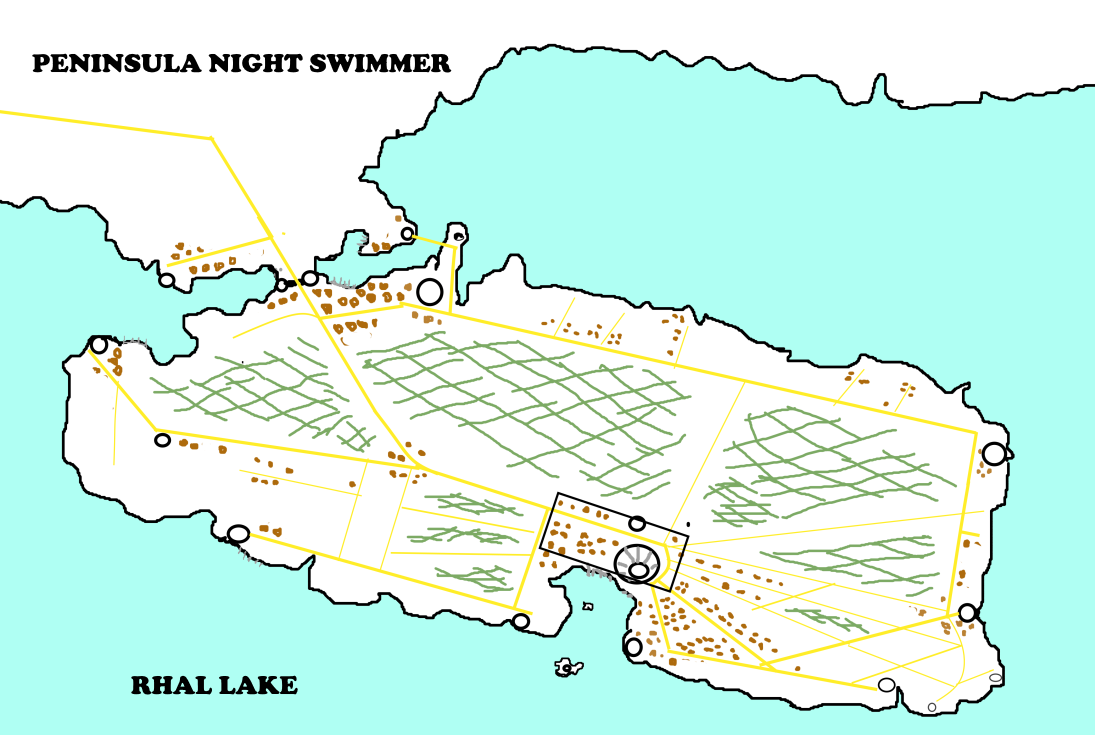 No power in the room that day had illusions about their chance of keep the secret for long. The Mage’s Brotherhood was fully capable of find out every detail of this matter using Divination spells. The proximity of a Xar-Scar would make unlikely for mages to direct any spell to the region, but only way to protect the Accord against the Brotherhood itself would be move the accord kilometers east and celebrate it inside the Xar-Scar. However, that would make impossible for some members to attend. Besides, the Brotherhood do keeps spies on all Xar-Scars, and the absence of magic make hard for some individuals move discreetly (adult dragons, for instance).   The reunion close to the Scar but not inside it was a calculated risk. One few would choose to take in calmer times, but perhaps not too risky at this moment.   Originally the accord would happen on Erevi, and the city would be included on it. The elves decided that would be too risky to place their last remaining State City in the conspiration and changed plans, the name of their secret religious order replaced the Elven Nation. The insects liked this change, and offered their city to base the encounter, but Ziicrix does not welcome mammals and as the Pentaedral Flame pointed delegations of elves and other non-insects entering the Insect City could attract too much attention. Particularly now that the insect alliance whit the giants was in focus after the Misfortune of Shirshan.   The Oblong Order claims no ground, all members of this organizations are immensely powerful but most of them are recluse. The Order offered a stronghold far bellow the continents, in a city of Undersea, and another close to Shear, both places of hard to access that would demand some sort of magic teleportation. Rare as they are the magical instruments of teleportation still available use them would represent a too large risk of attract Mage’s Brotherhood attention.   Was by this point that Zagdon made contact with member Pentaedral Star, by an noble elf he knew since the early days of Imperial Age. The god of Evil Magic had a few alternatives in mind: forgotten temples with discreet entrances conveniently placed in the Main Continent, and even an unsuspected residence on Lutianen that is in a small Xar-Scar.   The offer was impossible to refuse, unless there was some viable alternative. At same time, the idea of trust Zagdon was not as comfortable for most as the idea of trust in the other players on the table.   That conundrum created the opportunity for an unlikely invitation. The Throne of Loveletter would normally have no chance to participate in that level of business. The small human realm is a mere feudal state with a few centuries of history and no influence in global affairs. They don’t even had a sigrax.   Still, Loveletter is a calm and prosperous nation, as discreet as one could ask for. Close to the largest Xar-Scar on the planet in current time. At comfortable distance from Ziicrix, not too hard to reach from Erevi, and in a region that was Xar-Scar up to decades ago. No mage lives nearby, not even undead ones, and sigraxes are barely able to perform a couple of weak spells by day. Not the perfect place to serve as base for the alliance, but close enough.   And the noble brother of the Poet (title equivalent to king in that feudal realm) was studding elven Paths of Magic in Erevi. The human was one of the most brilliant pupils accepted by the Pentaedral Flame, but had not been initiated in the secret society and would never be (for being a non-elf) if was not for the conspirators needs of a home for their Accord.

When the Mage’s Brotherhood destroyed Shirshan to isolate the anomaly created under it by an attempt of invert the direction of the Vortex the mages saved Sharitarn, but sacrificed the most important merchant route on the planet. Blocked in one side the Sorrowful River dried out, the oceanic currents and the atmosphere changed. To hide their violation from the Brotherhood the Glass Snakes had orchestrated a was between Shirshan, the rival city Lutianen, and the race of Giants. Zaiaz, the self-appointed King of All Giants, had unified the giant tribes tanks to the support of Ziicrix (the Insect City).   The giants wanted access to the Mage University of Glass Viper, on Shirshan, and the insects wanted to free the founder fathers of their city from the magical crystal here the Brotherhood had imprisoned them for try something similar to what the Glass Snakes did under Green Poison. Zaiaz died on Shirshan with most his race, and the occupation forces of Lutianen, but the insects just had a set-back.   Human civilization entered a period of confusion. Aggravated by the Vortex, which entered a Transitional Period.   Two events indirectly related to the “Misfortune” of Shirshan added complications to human hegemony. Zagdon, the immaterial deity worse imprisonment started the end of Imperial Age, escaped. And Riagare, a wild sigrax, unified the human tribes of Piwag Desert against Lutianen to take back the mining village of Niore. The Sorrowful River had served as a barrier to contain both the human tribes of East Piwag and the Orc tribes of West Piwag, without it and with the human tribes unified the civilized nations on Sharitarn had a lot to worry about.   While that was happening in the South (which is no longer a separated Continent) Xiirsh arrived in the Crescent Moon Peninsula to rebuild the former capital of Draconian Empire, Iborn.   That was the context when the delegations arrived to Night-Swimmer Peninsula in Rhal Lake. One by one, they travelled as discreetly as possible through that land xenophobically humanist. Only a select few in the court knew about the encounter, the Poet had appointed his most trusted adviser to represent his interests in this meeting, his favourite brother who had studied non-magical healing at Agoioven, and elven magic among the Warlocks of Erevi.

The first obvious consequence of the Accord was the construction of an “Merchant Sector” in Ziicrix. Well isolated from the rest of Insect City, and kept under more careful vigilance than any other alienage on Sharitarn, the place goes totally against the history and inclinations of the State City. Its existence was justified by circumstances, as a consequence of the Misfortune of Shirshan. Since the only mammal race the insects considered as allies had been barely extinct they decided to make that step to avoid became completely isolated, and possible also to help the surviving giants.   In reality the Alienage was a frontispiece to hide the activities of cooperation in magical studies between the insects and other members of the Accord. The goals was to try build a Magic University on Ziicrix. Erevi had one long time ago, it had been closed during the Clan Age and would be reformed discreetly, but could not be reactivated until the Accord was ready to abandon secrecy.   An immortal high noble of Erevi accepted the proposition of free companionship made by the Poet’s brother. This powerful mage and warlock was know for her eccentric decisions, or madness, and fall in love for a human pupil of an apprentice was nothing incongruent enough with her biography to attract attention.   This noble elf moving to Loveletter covered most the changes in the feudal realm. Suddenly old Merchant Houses of Mimbao and Mevrengau discovered unexpected business opportunities in what had been the South Coast of South Continent, and since the death of Sorrowful River was the South Coast of Main Continent.   Temples of Zagdon appeared in the Alienage on Ziicrix, on Erevi, Shear, and in many other cities. Some authorities usually reticent to the arrival of new religions showed unusual tolerance with the missionaries of Zagdon. Nothing explicit enough to raise alarms in the Mage Towers of those cities.         Members:   Oblong Order. (secret order)   Pentaedral Star/Fire. (secret order)   Ziicrix , the Insect City. (state city)   Church of Zagdon. (religion)   Lovelleter (feudal realm)
Type
Political, Alliance