Across the ages, the Material Plane hosted many battles between the Shiars and the forces that threathened the equilibrium of Shandar. When such powerful entities clashed the results were, more often than not, catastrophic. Usually the battlefields were just damaged, even destroyed, but with the slow passing of time they would eventually heal. Charred forests would make way to new trees, collapsed mountains would create new valleys that would fill with life. Sometimes, however, the damage was irreparable and lead to what today is known as the warped lands.

On the subject of spell casting

The following is an extract from the tome "A Dissertation on Arcane and Divine Magic, by J.S. Venrik", useful to understand the origins of the warped lands that dot the Material Plane.

To understand the nature of spell casting, whether of arcane or divine nature, one needs to be aware that when the magic user is uttering the words required to alter the reality around themselves, the energy required to modify the very fabric of the Material Plane is funneled from the Unending Planes, usually in very modest quantities if the spell caster is a mortal being. This energy transfer is modeled by the will power of the caster, shaped into the form they desire the most: a burst of flames, a chemical reaction in the target's brain, or anything else that the situation requires [...]

With this concept in our grasp, it's obvious that when spells are being cast by the The Seven Shiars, divine entities with immense power, the energy required to be transferred has to be much higher. In times of battle, when the evil forces threatening Shandar required the Shiars to take extreme measures to neutralize them, the tremendous amount of energy used by the spells could cause a rupture in the fabric of the Material plane, creating for a split second a direct connection with the Unending Planes. This was enough to cause an irreversible change in the natural laws of the area, an effect that we refer to as "warping". 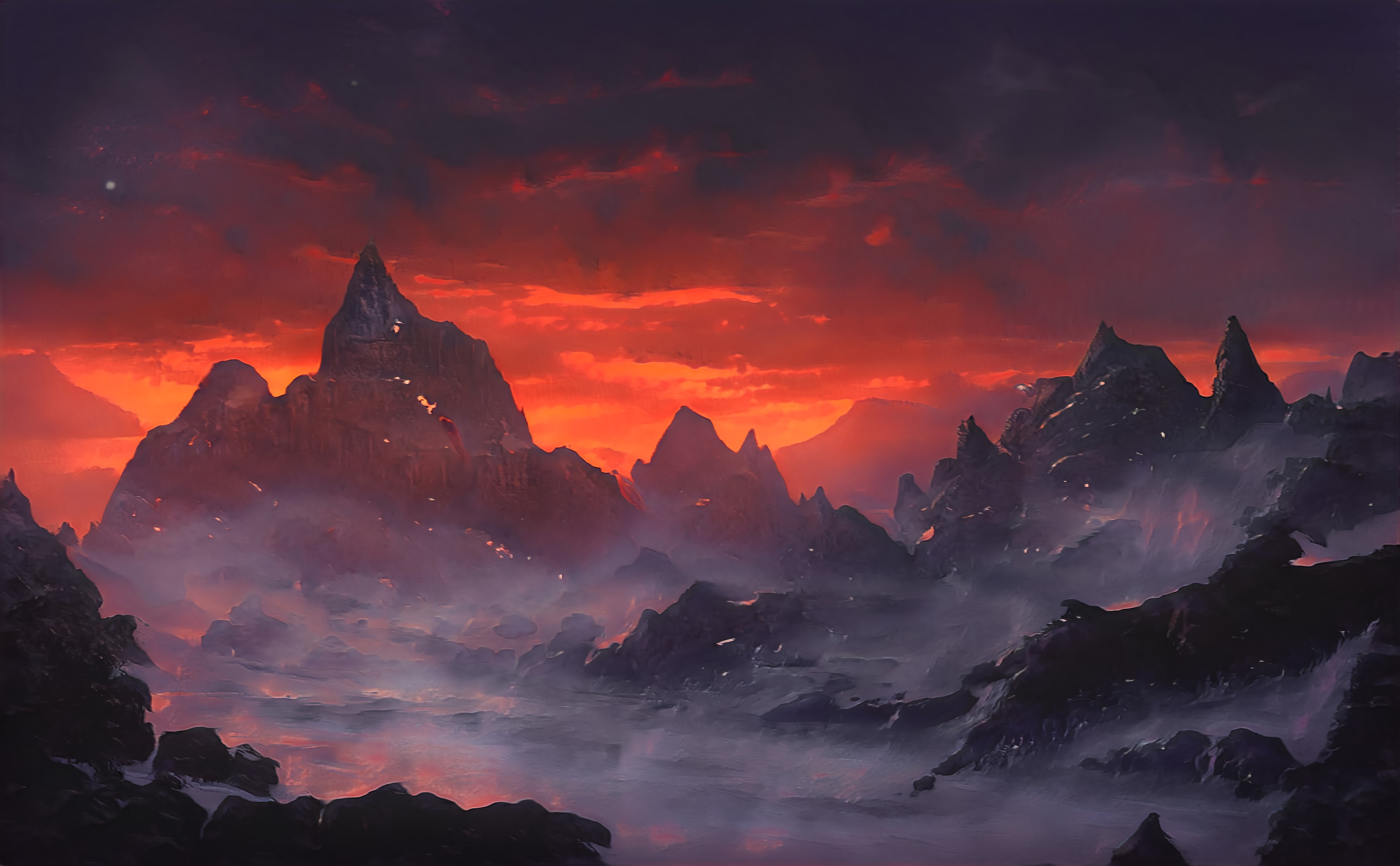 Each spot where a warping occurred is different from the others, as the unpredictable nature of the Unending Planes merged with the physics laws of the area around the initial connection between the planes. Effects can vary from the creation of a large area full of valleys where rivers of molten lava slowly carve their way into the earth, like what happened in the The Ashen Hollows pictured above, to the giant frozen vortex found miles off the Sleepless Coast, or like the floating islands of Northern Yuul. The extension of the warping is also variable, ranging from an entire region to a very localized area, like a cave or a lake.   Such wonders are scattered throughout Shandar, some well known, others yet to be discovered, a matter that is easier said than done. It is known for a fact that often the warping not only changed the physical features of the land (or sea) around their focal point, but also mutated the local fauna into horrific monsters that now roam those places in search for prey. Many explorers fell to the claws of such creatures, and currently Her Majesty's Royal Cartographers Guild suggests hiring the aid of expert trackers, and armed escort, if an expedition is to be organized in search of a new warped land to map.
Type
Metaphysical, Arcane

A Wealth of Discoveries

By Royal decree, exploration of known and unknown warped lands is strictly forbidden unless an exploration permit is issued by Her Majesty's Royal Cartographers Guild to the individuals willing to risk their lives for the betterement of the Rhylian Empire
— an extract of Royal Decree 145/2b of 942AB

While inherently dangerous to explore, the warped lands can be the source of life changing riches for the daring explorer that braves their usually hostile environments.   Coming back from an expedition means to have brought back to civilization anything from lost knowledge of the Unending Planes, new wondrous materials to be used in feat of arcane engineering, or extremely rare specimens of mutated fauna or flora. Regardless many institutions would pay handsomely for such things, and the Royal Cartographers Guild is always looking for fresh data to update their maps anyway, which they are willing to pay at a very competitive rate, provided the explorers first purchase their permit, a business that is often more lucrative for the Guild than the cartography itself.

Articles under The Warped Lands

This is such an interesting concept. I'm really intrigued as to all the different mutated flora and fauna that could be discovered in these lands. I'm not surprised that you need a permit to explore them though. Does anyone ever just sneak in?

Thanks! They do sneak in, as there aren't nearly enough guards to protect all the warped lands, but generally if you are caught trying to sell a contraband warped artifact you can be arrested.