"Inside the mist there is a ghostly figure of massive white ship floating slowly in almost still water. As the ship comes closer one can hear the low clatter of the bones the ship is made of."

The creation of Bone Palace was inspired by common joke. When Agnes the Skull collector started to gain more power, and the count of people she killed or got killed rapidly increased, Agnes' hobby to collect bones of her victims started to fill up the ships of her small fleet. Soon people started to joke around that Agnes' fleet was so filled with bones that she could build whole ship out of them. Little did they know that Agnes would take the idea seriously and when her power and wealth increased even more she sought out and hired young talented inventor, Fred Gregorus, to manufacture the ship for her.

The Bone Palace was a legend even when it wasn't completed. Seeing such a large ship with such a ghostly demeanor is moment of awe for any person. On top of that for years Bone Palace was at the middle of the power struggles of Land of the People surviving multiple attacks and battles. An incredible accomplishment for any ship, but even more so for a ship that was not build for battle. Of course the small fleet of heavily armored ships following Bone Palace all around made it's survival possible, but that didn't stop the stories of Bone Palace's incredible victories and alleged immortality. Nowadays the Bone Palace does no longer need the fleet to follow it around, as its legend has grown so great that, no ship would dare to threaten it nor it's owner. 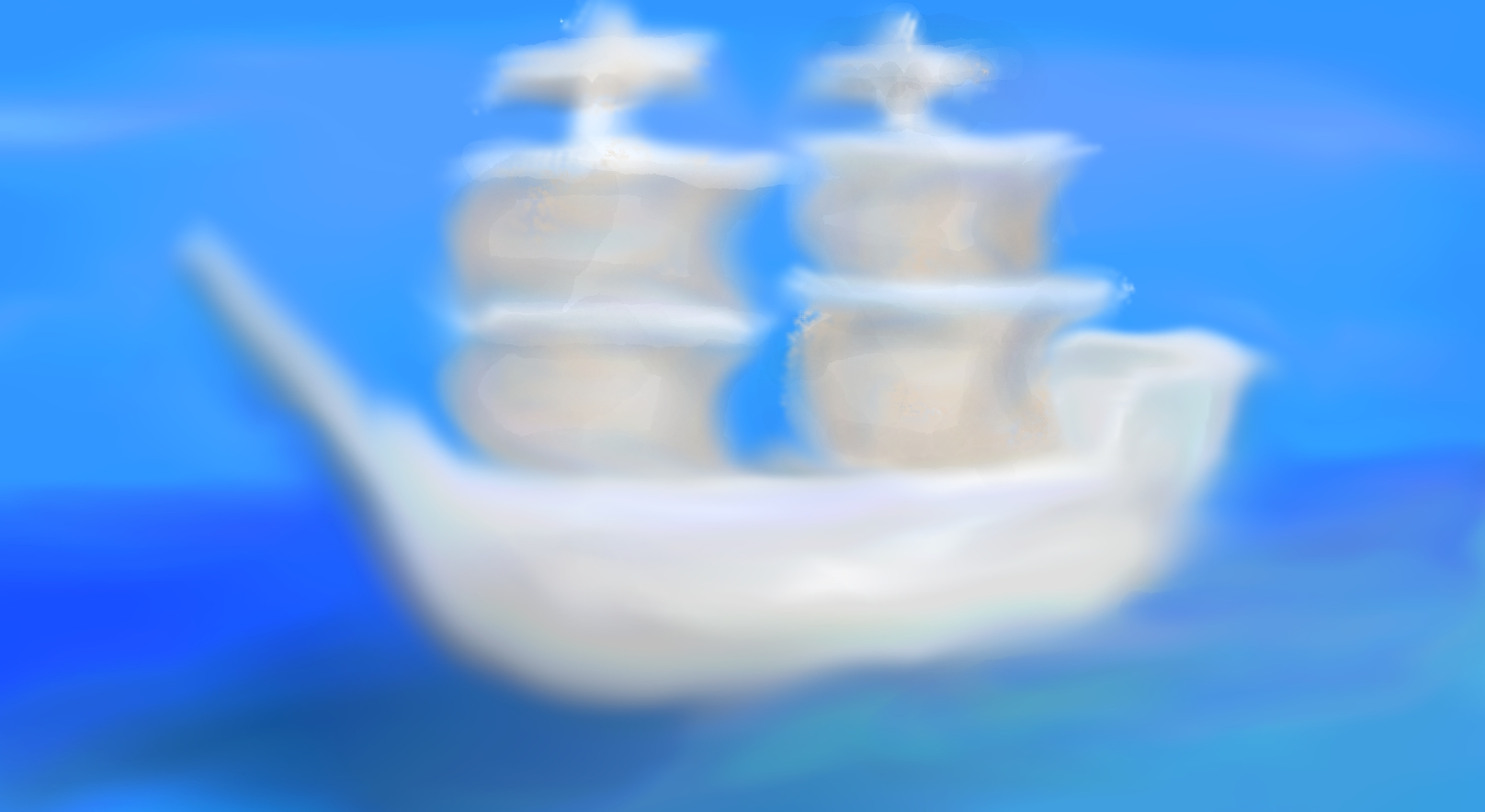 When Fred Gregorus got the task of building a ship out of bones, he soon discovered that making watertight structure out of bones is pretty impossible task. So he needed to invent a way to make it look like the ship was made out of bones. As bones are quite heavy material and covering wooden surfaces with bones would create quite a thick wall, he decided to use more unconventional material to build the ship.

First idea was that a skeleton of an giant sea monster was going to be the supporting structure of the ship, but unsurprisingly none of those were available. So, the supporting structure of the ship was build from wood and steel. Then the structure was covered with thick, strong and durable armored walrus leathers double stitched together with strong wire. Thick net was build from the bones, wire and metal hooks and the net was hung up to cover all the walls, floors and ceilings of the ship to give the illusion of that it was made of bones. Rib cages, coxal bones and skulls with holes were threaded through poles, pillars and columns of the ship. Even the masts of the ship were surrounded with piles of skulls pierced through pikes keeping them together.

Ship with leather walls, floors and ceilings are hardly a practical or durable solution. Even though the bone nets provide some protection to them, they still require constant maintenance as the leather need to be regularly oiled for it to stay watertight, the condition of the leather and the seams need to be checked an repaired as even smallest hole in the seam can rapidly grow and cause the whole ship to sank. The lowest parts of the ship most exposed to damage and carrying the heaviest load are actually not leather but wood and steel, as the leather would have been too fragile structure as even the broken bones of the nets could pierce fatal hole to the leather. It is said that the sails of Bone Palace were made of people's skins, but actually they are the same armored walrus leather.

As Bone Palace was build to be the grandiloquent head quarter of Agnes the Skull collector, it was build to be enormous compared to other ships. It is approximately 80 meters long, 10 meters wide, over 10 meters high and it's two masts rising over 40 meters high. It has two holds, three floors and the captain's cabin, most often known as throne room. First floor contains toilets, kitchen, large ballroom and dining area able to seat 100 persons at one time. There are 33 cabins and parlour on the second floor. The third floor holds larger sleeping area for 50 persons and smaller sleeping area for 30 persons. There are also the brig and torture chambers. The crew of the Bone Palace has more than 100 people as the large ship needs constant maintenance.

Bone Palace was not build for battle, because it's fragile structure has no change against real ships in battles. There still are some cannons on the rear and front of the deck, so that the ship can defend itself, while fleeing or meeting enemy. The ship was also not build to make sure that the crew would survive the shipwreck. Even though there are two large rowboats and four small rowboats on the deck, there is no change that those are nearly enough for the large crew of the ship, if the ship would sink. It is said that Agnes is so attached to the ship that she thinks, that if the ship sinks so should all of them too. Previously the bones of ship were all from the enemies of Agnes, but as her attachment towards the ship increased, she started to hang up the skeletons of her most beloved dead family members to best places in the ship. She is also said that when she dies her skeleton will join the ship as well.


One can be certain that Bone Palace was not build for practicality, but for appearances, so that it will strike terror to anyone who sees it. It is more like floating piece of art than practical vehicle. 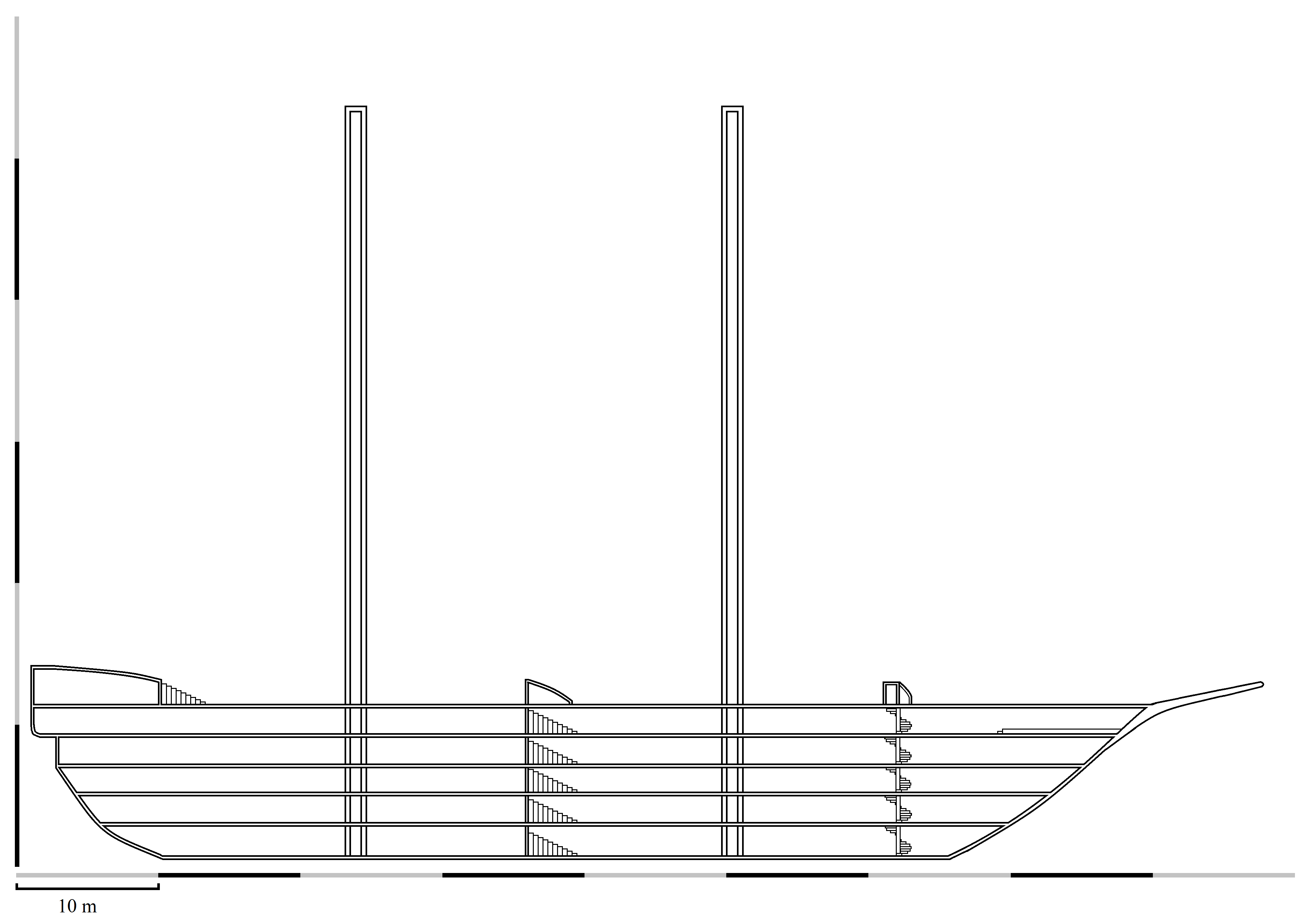 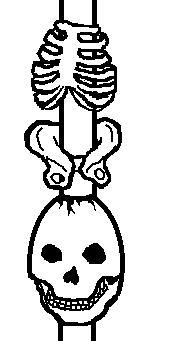 I like how you detail how Fred got around the challenges of making a boat of bones. I also enjoyed how Agnes has begun to incorporate bones besides those of her enemies into her design. Your diagrams are excellent and really help me to understand how the Bone Palace is constructed.

I really like this concept! It would be terrifying to witness a ship made of bones coming towards you, so I think that really archives that goal. Good job on the art and diagrams, too!

This is not only ghostly but also ghastly. :O I like the realistic approach of this ship more having a representative function as bones really aren't a material for shipmaking.

Great job on you map, as well as having someone in world think about how to actually make a bone ship. I shudder to think how they keep the bones clean, wood and even fiberglass ships can be bad enough, all the gaps in the bone net, i feel bad for the people in charge of maintaining the ships appearance.