Taid picks up a bounty in Avondale, from the Rural Watch. There is a hydra that is killing off livestock. As he is walking south to the pasture where the hydra was last seen, he spots a travel-worn Elf. She looks like she’s been out in the bush for ages, so he figures she might be a useful ally in his quest to get this hydra. He offers her half the bounty if she will help him.   Elitheris had been heading to Port Karn, since she needs arrowheads. She had missed a turn, and went farther east than she had planned. It’s possible she got bad directions from a local; she’s usually pretty good at navigation. In any case, she agrees to help, and they both go to get the hydra.   Eykit, running from the authorities and a rival gang, sees them. He hasn’t eaten in half a day, and since he had to leave in something of a hurry, didn’t bring food with him. Besides, the two look like they can handle themselves, and it’s possible that the Flower Street Harrowers have sent some leg breakers after him. That Elf looks like she can handle herself, and the Dwarf looks like he could take on anyone with ease. So he introduces himself, and the other two agree to let him join the hunt.   They head off of the high road and onto a farm lane, paralleling the hedgerows. 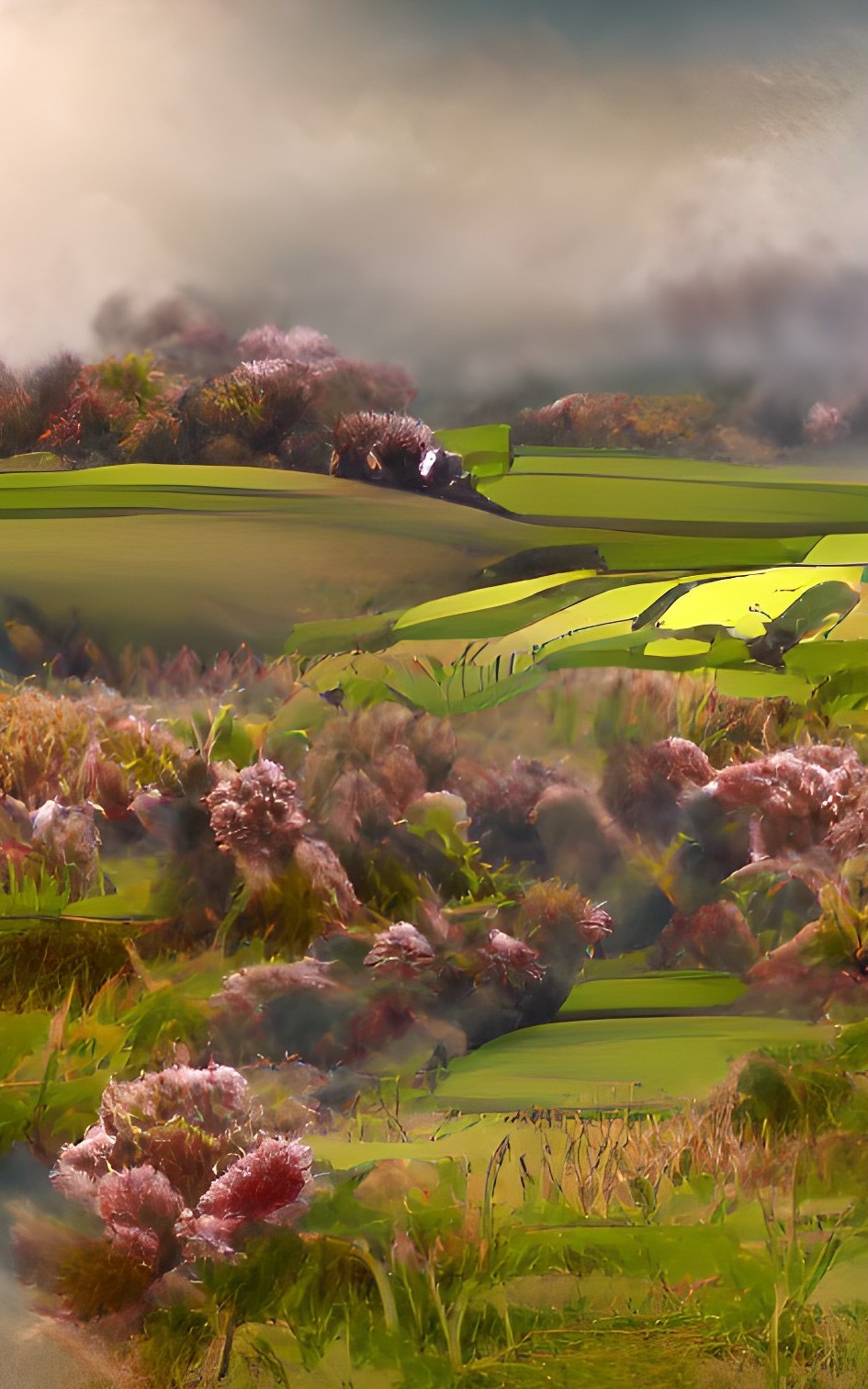 They come to a collection of buildings, which are a couple barns, some grain elevators, and basic housing for the local farm workers. It’s busy, with several field hands working the fields. They ask some questions, and are pointed in the direction of where the hydra had done its business. Arriving there, they find the remains of its last meal, a steer. The hydra hadn’t been here for a couple of days.   Elitheris sees some blood on the ground between the pasture and the jungle. They head into the jungle, going in that basic direction. Elitheris is trying to find spoor, but is having trouble finding tracks. Taid and Eykit are following, keeping alert for ambushing hydra. Finally they come to a ravine, an area that might have an appropriate area for its lair.   Sure enough, they find a small cleft between some rocks, made smaller and harder to get into by a collection of other rocks that didn’t look natural. Taid uses the haft of his halberd to probe the cave. It opens up a bit beyond the opening, and is at least four feet deep. Eykit squirms inside to check it out. It’s a tunnel about two feet wide, and 18 inches tall, goes back about six feet, then makes a sharp bend to the right, with a space about two feet deep. That back corner is a mass of twigs, leaves, and grass, and the tunnel reeks of reptile. Feeling around in the nest, Eykit finds three eggs, the size of hen’s eggs. He pockets them, then starts squirming back out.   It’s at this moment that the mama hydra launches herself from the edge of the ravine, right onto Elitheris. The sudden impact of 55lbs of multi-headed snake knocks her down, and the hydra goes for her face. Fortunately, she blocks the attacks. 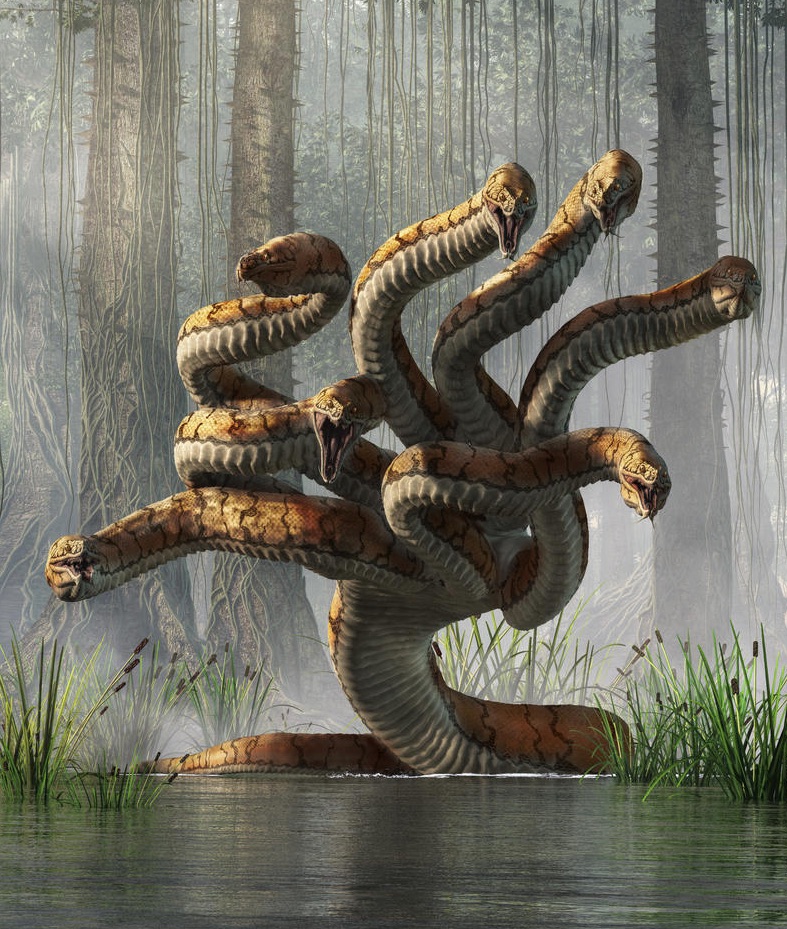 Taid grabs Eykit’s ankles, and forcibly drags him out of the cave.   Elitheris pulls out her knife, and starts trying to stab the squirming, attacking mass of toothy heads, but she can’t get a good attack in.   Eykit pulls his short sword and stands up, ready to fight. He thinks about running, but he feels he needs to help out, so he stays.   Taid grabs his halberd, and stabs at the hydra on Elitheris’ chest. It hits, and the hydra screeches in pain.   The hydra attacks Elitheris, biting her in the groin and chest. Her armor protects her to a certain extent, but she is wounded nonetheless. (And here is where I forgot about the venom, dammit!)   Eykit attacks, but misses as the heads dodge out of the way. Elitheris’ attack doesn’t do much better, although she did draw blood. Taid uses the hook on the halberd to get the beast off of Elitheris, and he succeeds, pulling it off of her and plunging the hook through its body, pinning it to the ground. Elitheris rolls away, out of its attacking range.   Elitheris needs her bow, but it was dropped when the hydra leapt onto her. It’s in its attack range, so she grabs a stick and fishes it to get it away from the hydra.   Taid steps on the haft of his halberd, freeing his hands, and he pulls his short sword. The beast is still pinned, squirming and attacking anything it can get to. Eykit and Taid attack with their swords, getting a few good hits in. Elitheris, now armed with her weapon of choice, looses an arrow, pinning the back end of its body to the ground.   The group manages to finally kill the thing, but not before it gets a hit on Eykit, biting him in the face. Even after it stops moving, they hack at it a couple of more times, just to make sure it’s dead. Now they notice a pair of scabbed over puncture wounds, the result of the farmer with a bow.   They gather up the four severed heads, and the body, and carry it back to the Rural Watch station and collect the bounty. They get their $200, split three ways, then head to the public house in Avondale for some food and drink. Then they hit the inn, where Elitheris is looking forward to a nice bed, something she hasn’t had in quite some time.   2 character points were awarded to each player. Eykit and Elitheris each got $66, Taid got $67.   We leave our heroes in Avondale, at the inn, with full bellies. It’s not large, it has four rooms: two with two single beds, and two with two double beds. One of the single bed rooms is full, and one of the double bed rooms has a husband and wife sleeping in one of the double beds. Note: it’s common for strangers to sleep in the same bed, if it’s a double or triple bed. It’s possible to share a single bed, but that’s pretty close.

2 character points each. Gained $66 each from the bounty for the hydra, plus 3 hydra eggs.