A double-hulled ship used to the sail in the Sunroad archipelago. Exterior top down view of the kar-karang with a baggage boom. 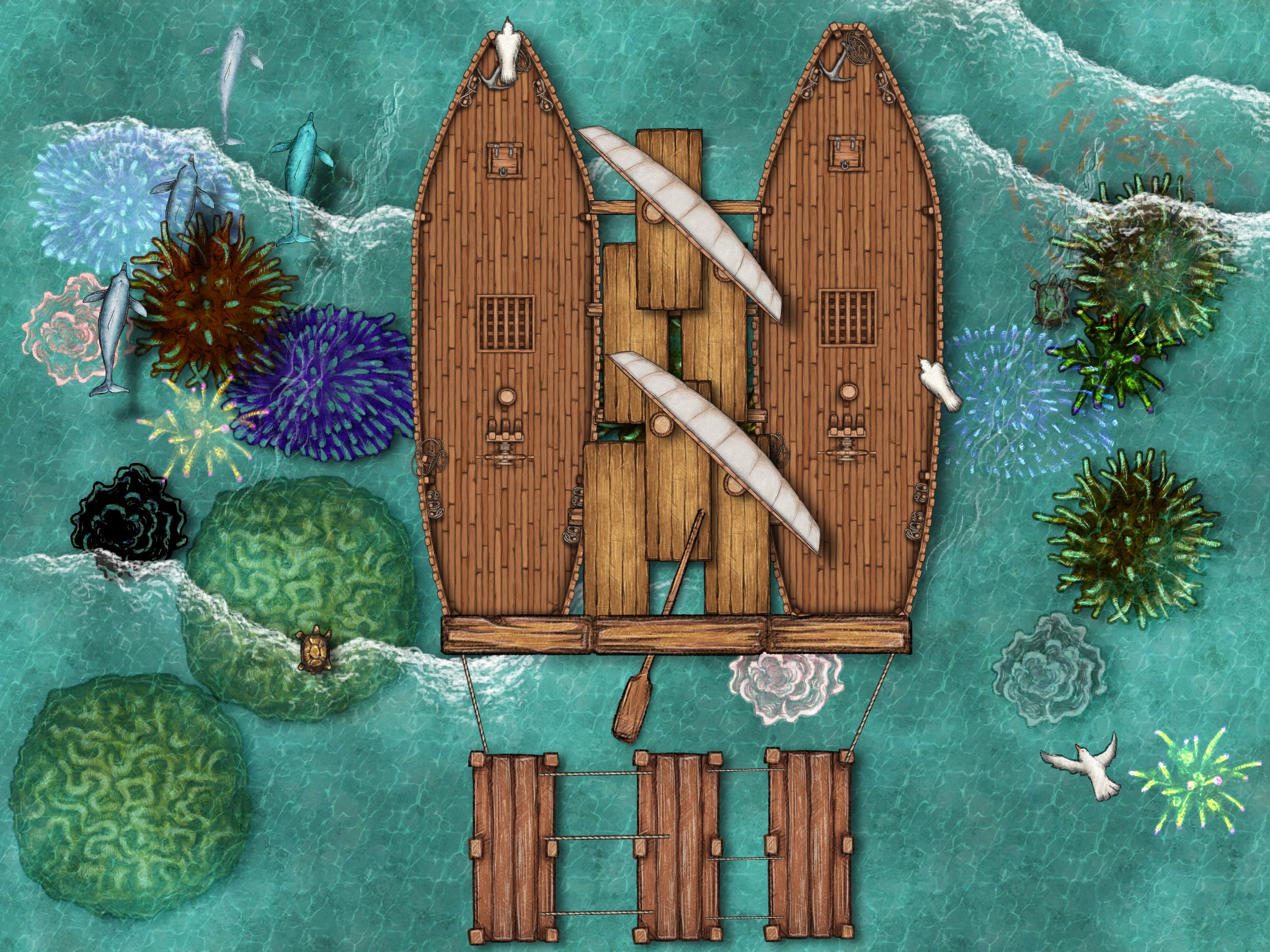 (It's made with Inkarnate, that makes it a map right?)
Skiff Interior Schematic: 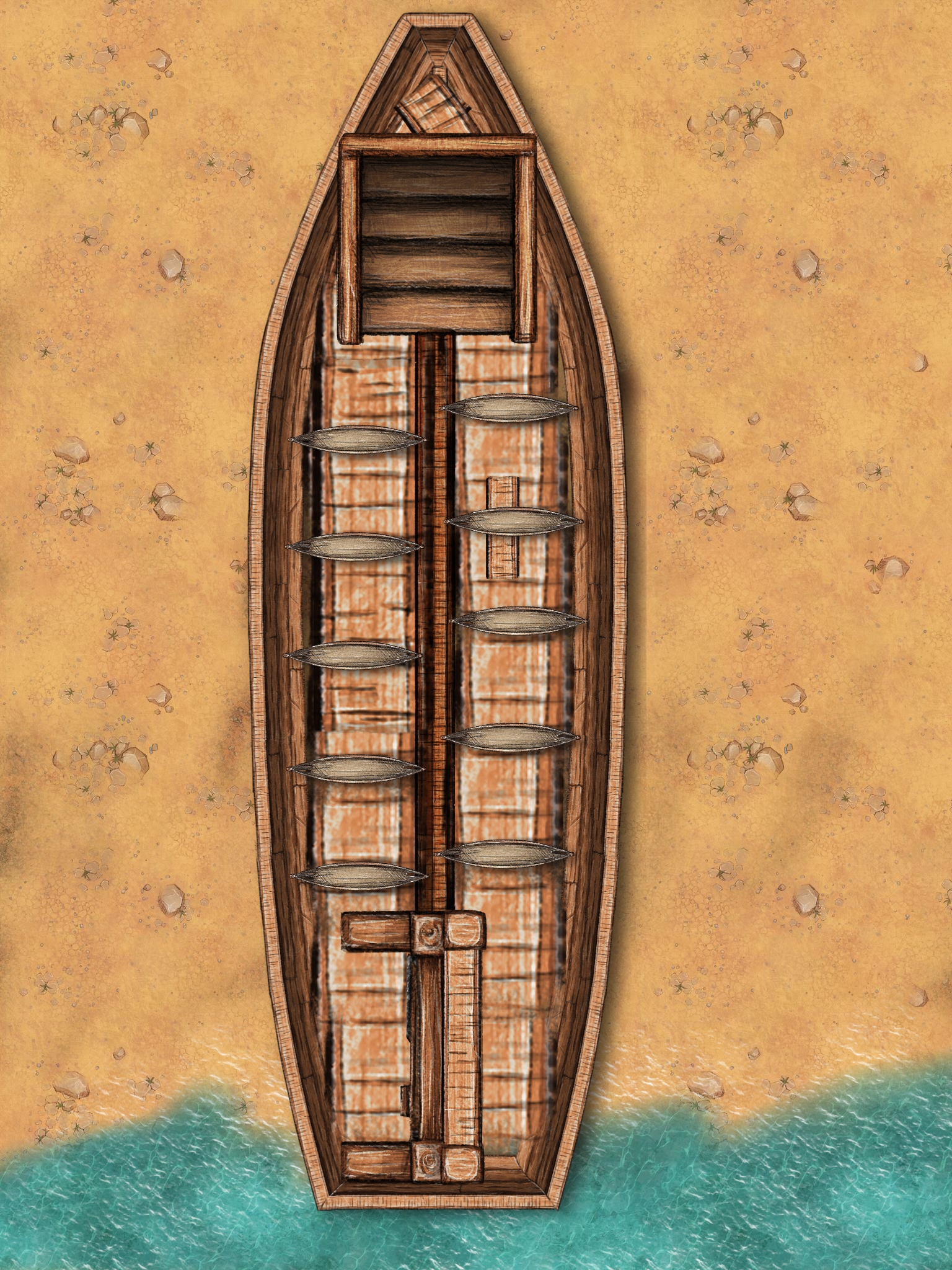 The original design of the Sunroad Islanders was two hollowed out two canoes lashed together with wooden slats. This design allowed them to sail over even the most dangerous of the myriad reefs that make up the Sunroad Archipelago.
In time, the Islanders came into the contact with the Kisangi sailors of Jaredi and Uwak.


From Jaredi, they adapt a skiff hull design that allowed for almost the same draft shallowness. From Uwak they learnt the secret of battened sails.
The modern day Kar-karang consists of two skiff hulls with a wooden platform between them for the masts and the ship's cabin. The ships carry half-battened sails woven of plant material. In each skiff there is some cargo storage space and room for hammocks to the strung. Only the captain has the privilege of deck side cabin and then only if there are no paying passengers. Space on a kar-karang is at a premium.
This is an Island running vessel, most often a Kar-karang will find mooring as the sun sinks beneath the crystal waves, so the sleeping space in the skiff hulls and cabin is for emergencies only.
If additional cargo space is required, a raft boom is attached to the kar-karang with hawsers. This also has the advantage that the boom can be left behind should the crew be seeking to engage in ... conversation ... with another vessel.
The kar-karang does not have a wheel or mounted rudder, instead it is controlled via a steering oar at the back of the ship. It is not meant to be a ship to ride out storms, if you see a tropical storm coming while you are in a kar-karang - find shelter!

Among the Islanders, the traditional kar-karang survives as a "boy's boat". This is a boat a young man builds on his twelth birthday. In order to be counted a man, he must hollow out two canoes and lash them together. The boat was must be built well enough that he can sail out from his home island and gather at least one catch of fish.
On his return from this voyage, the boat is used to create a great bonfire on his home beach and the catch is roasted. It is tradition that the boy himself does not eat from this catch, instead he eats only coconuts that day while the rest of the island compliments him on the excellence of the fish that he caught.
The boat is burnt so that no one will remind the boy of the terrible first attempt at building a boat. It is after his twelth birthday when his father will teach him how to build a modern day kar-karang.
Every man of the Islands can build a kar-karang, but these day there are islands rich in wood that are considered the best boat builders and kar-karangs are often bought from these islands.

The primary propulsion of the kar-karang is in it's half-battened sails, woven of plant materials. In addition, standing oars can used by the crew from the deck of the skiffs, but given the shallow reefs that is the home of the kar-karang, rowing is not the prefered means of travel. Oars will often get fouled in the coral pinnacles of the reefs. The standing oars are prefered as the crew can watch where the oars go.

The kar-karang's primary defense is speed and agility in combination with its very shallow draft. Any ship seeking to follow the kar-karang into its home waters runs the risk of the coral ripping through its body.

Nickname
kar-kar
Rarity
Common in the Sunroad Archipelago
Beam
2 to 5 meters
Length
7 to 12 meters
Height
0.5 to 1 meter
Complement / Crew
8
Cargo & Passenger Capacity
Passengers: 10 if they like each other. Cargo: if it doesn't mind getting wet, the boom can take a lot.

Nice looking map, I see you used inkarnate as well :) If you want to blend the reefs more with the water you could change their hue or use a shadow blend on them as to make them look more like they are underwater :) 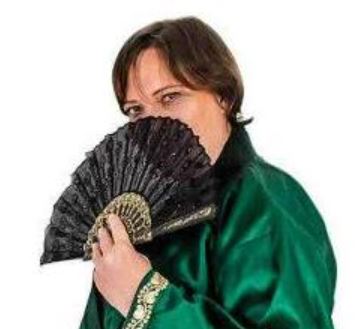 oooh, thanks for the tip, I'll try that!

Nice article, i liked the inclusion of the coming of age ceremony that also serves to remind each generation as sort of a "look how far we have come, this is what we used to use."

Thanks! I like building cultures, I feel like things are just cool for a moment, but cultural impact really brings the reader or player into the world.