This strange blood drinking bird with its red eyes is used as a messenger bird in the Empire of Lumiaron. The birds will find any person whose blood they have consumed last. They are capable of flying from one end of the Empire of Lumiaron to the other in three to four days, depending on flight conditions. Messages are most often encoded incase the birds are intercepted. The blood of the person that the message is addressed to must be ingested by the bird just before flight and again on arrival. The bird is capable of carrying small packages or messages, however they can carry at most one quarter of their own weight, with proper training. The sender requires a crystal-cake or a vial of the receiver's blood. If the bird drinks another human's blood before delivery, the homing signal will be lost.

White head feathers with blood red eyes and a large, sharp black beak that has a piecing tip. The white feathers give way to red and blue wing feathers. The tail feathers are black. The feet are black with sharp talons. The birds are as long as a man's forarm and weigh more than is comfortable to carry on a person's wrist.

Bluron birds mate twice per year and are egg layers. The male attracts the female by building a nest. The female will inspect the nests of all courting males. The nest that she sits down in is the chosen male for the breeding season. The female typically lays one to three eggs. The male and female take turns holding the eggs warm after the female lays the eggs. The eyasses are raised by both parents.

The eyas grows rapidly and is capable of flight six weeks after birth.

The mountainous region in the north of the Blutben penninsula.

Bluron birds gain their sustance through drinking blood. Their beaks are specialised to piece their prey with an overhanging beak that forms a sharp tip. Their under beak contains a sack like appendage that allows them to suck up the blood from the wound. In appearance it resembles the sack like beak of a pelican.

Bluron birds are capable of finding any target whose blood they have drunk across the length and bredth of Lumiaron. They are used as specialized messenger birds for this reason. They have excellent eyesight. 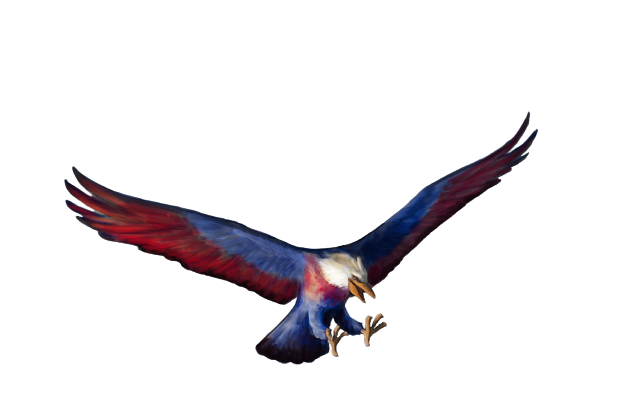 by Roberto Viacava
Scientific Name
Bird
Lifespan
30 years
Average Height
80 cm
Average Weight
2.5 kgs
Crystal-cake: A small amount of blood mixed with a special crystalline substance mined and prepared in the Treval Duchy which can be fed to a bluron to allow them to find a target.