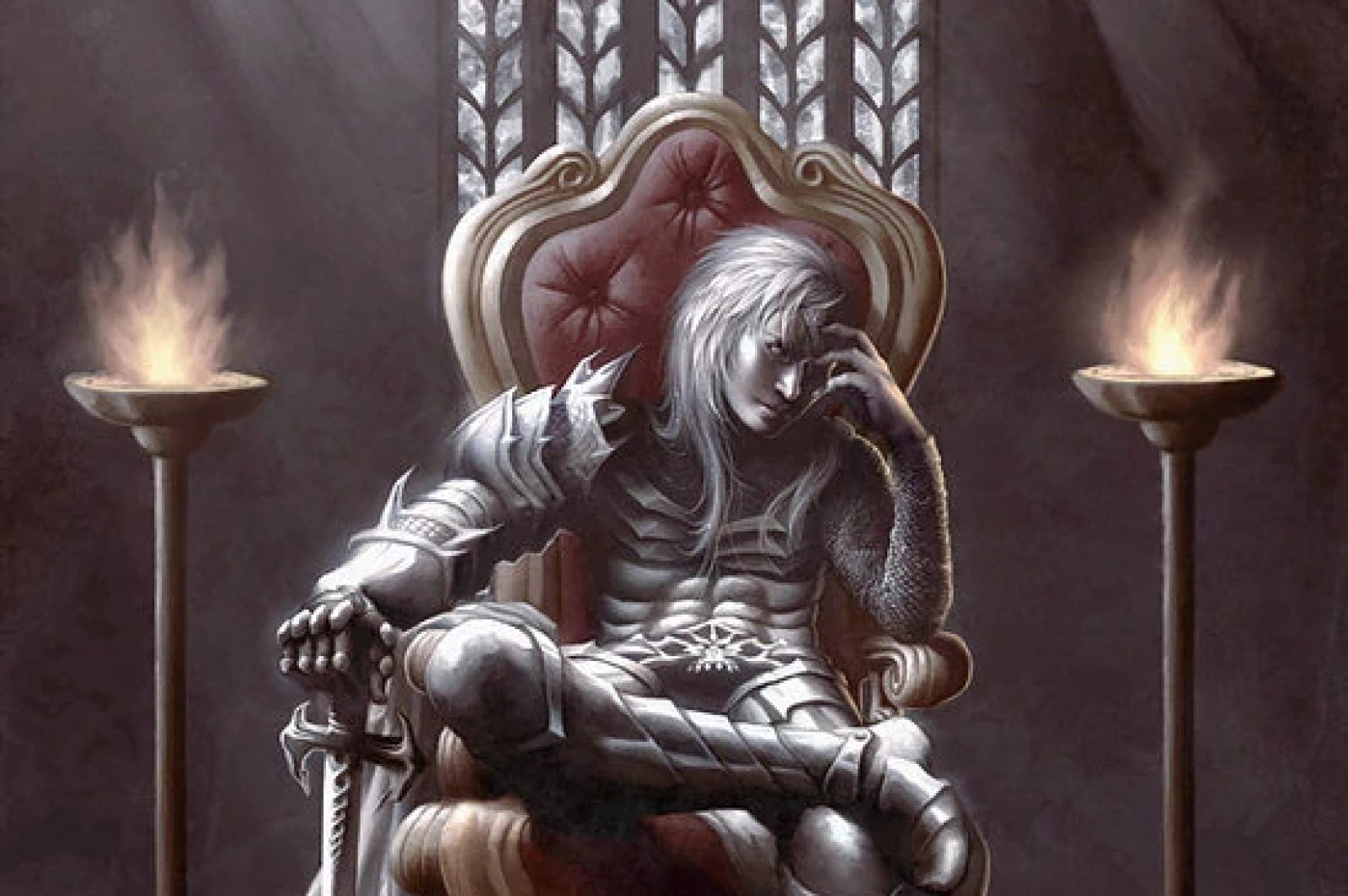 When the vampire lord Elan Varlov had to sacrifice his last living daughter to the Mad Queen Morgana LeFay he plotted with the living svartálfar to take revenge and overthrow Undying Queen. His daughter offered herself as a sacrifice to imprison the Queen and seal her away allowing Elan to take the throne and crown himself the Blood King.   But seeing the plight of his people and the dangers of the dead controlling the living he sacrificed himself to destroy the svartálfar necrocracy and return control of the empire to the living. While he did save the svartálfar from the Weight of Ages that afflicted the svartálfar for a time it was the meddling of the invaders who that caused the svartálfar to return and take revenge upon those who seek to steal the land belonging to the svartálfar.

I do not care if you believe me or not. It is not just cause I lost my title and lands, I remember the bloody revolt and how the Queen was deposed. I tell you the King was as corrupt as the Queen he just hid it better. - Court of Breath Advisor

Elan Varlov is not the martyr the stories tell. In truth Elan studied under Morgana before she was made the Queen of the svartálfar and supported her even when the signs of madness were all too obvious. While he supported the Queen openly he had been approached by revolutionaries with whom he did not support but neither did he oppose, instead he played both sides hoping to turn on one at the first sign of weakness.   It was not until the Queen attempted to take his last living heir that he chose to revolt. At the time his great grand daughter Ana Varlov was the last of his family who still breathed, after refusing all bids of marraige Ana declared she could not stand to bring a child into this cursed land. While upset Elan had resigned to abandon his last ties to the living and throw one last ball in honor of Ana to induct her into the Court of Blood as a vampire. It was in this party that the Queen became jealous of the Ana's beauty and decreed instead of Ana being turned into a vampire Morgana LeFay would make her the next living vessel for the Queen. On the next full moon the Queen would kill her current vessel (a former maid still in her prime) and possess the body of Ana Varlov. Outraged at what would be the senseless murder of his own great grand daughter Elan finally agreed to join the fomenting revolt.   It was Elan himself who came up with the plot thanks to his mastery of necromancy. Having taken Ana into his laboratory he had the girl partially flayed so as to tattoo magical glyphs under her skin to trap the Queen once she attempted to possess the girl. He than mesmerized Ana and restored her body letting the coronation continue with the Queen possessing the girl. While the Queen possessed the body of Ana plans were made to begin the revolution when the Queen attempted to discard her current body for another. The revolt did not have to wait long as the Queen had taken to killing off her hosts at the first sign of age. But this time thanks to the magic beneath her skin the Queen could not leave Ana's corpse. Trapped Elan and the revolutionaries struck and slew most of the Queen's court. Elan appointed himself as the Blood King and hid the Queen away while he attempted to find a way to permanently kill her.

Som' say the Queen could not be killed and the Blood King just sealed her away. Ever' now and then you get some royalist or undead who tries looking to find and free her. I wouldn' even if I was as dumb as 'em, just think if she was mad then just consider how she is now -Court of Blood Councilor

While he held the throne he fought to appease the living and the undead while planning the complete subjugation of all. To that end he brought the greatest minds of the svartálfar under the guise of removing the curse upon the island of Forbuho. With many of the best necromancers attempting to life the Weight of Ages the commoners were overjoyed while the nobility was too busy to plot against the new king. And for almost a hundred years the scholars, sages, wizards, and philosophers all worked themselves to death and beyond to save the svartálfar. Meanwhile the Blood King plotted a way to use the resulting research to ascend to Godhood and rule absolute over both the living and undead. Unaware of Lord Varlov's meddling many of those working on the The Great Undertaking were given false information that the Blood King believed he could manipulate. As time went on though discontent arose from both sides and rather than fight another civil war the Blood King attempted to perform an imperfect ritual that, while it would not make him a God could empower him to fight off any threat to his rule. Gathering the greatest spell casters which included most of the svartálfar nobility the Great Undertaking was done around the city of Obsidian. But due to the Blood King's hubris and his lies instead of being empowered by the ritual all the life was ripped from his body alongside everyone in and around the city. When the ritual was completed a silence fell upon the island it took three days till any dared go to the ritual site.   They found everyone near and around the city had met their final death including that of the King of Blood but as the living svartálfar entered Obsidian they felt the curse lifted while within the city walls. Soon the remaining svartálfar from across the island all settled within Obsidian and with the living outnumbering the undead the first living King rose to power. The Bloody King's undertaking had one more result as the city itself vanished into a pocket dimension and was seen for a thousand years.   While isolated from all else the story of the Bloody King spread throughout the living svartálfar and grew distorted as the former peasants attempted to piece together what had happened. What few undead that survived know a little of the truth but none were believed as they were toppled from their rank and nobility and made into little more than surfs and advisors. By the time the city of Obsidian began to return to Forbuho the research on the Great Undertaking was lost to age or plundered by adventurers.   A few outsiders have begun the piece together the history of the island but little is known save for what books and art that has survived the passage of time. Those most interested in the Bloody King are the The Grey Court from Scarlett who believe the former vampire is tied to a prophecy that a magical artifact coming from Forbuho would destroy their kingdom.

If it were not for the Blood King's sacrifice we living would be at the beck and call of the dead, now it is the dead who are at our bidding. The dead are have the wisdom of the past but lack the heart of the present. -svartálfar Storyteller

Today there is a celebration on the anniversary of the Great Undertaking in honor of the Blood King. A festival is held filled with red roses in honor of the King's court, mindless undead are animated and commanded to dance in the streets while parchment decorations are hung from every window and doorway. Incense is lighted and traditional foods (fruits and candied meats) are eaten till the evening when a great bonfire is lit and effigies of the Bloody King and other undead are set ablaze.

Remove these ads. Join the Worldbuilders Guild
Characters of Note