The Kingdom of Albion 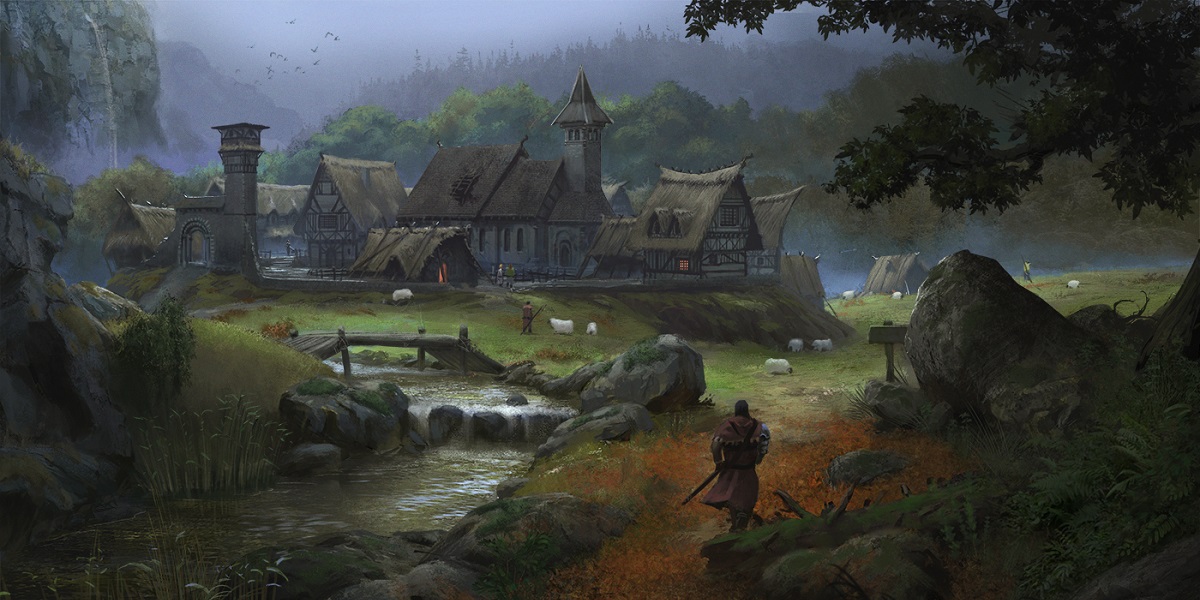 Albion is a land of farms and fields, of apple orchards and streams, of strawberry-hedged lanes and bumblebees. But Albion's quiet and rural life is always under threat. The Orcs in the mountains; the warlike Easterners; the malformed and hideous creatures of the Barren Wastes: all these threaten to upset the peace.

The kingdom is some 180 miles from north to south, meaning it would take about a week to cross on foot or about three days on horseback by the Kings Road. Its primary terrain is rolling fields and gentle hills.   It is a feudal monarchy, ruled by the just King Jarrad I from his castle walls in Littlebrook. His two cousins rule the eastern and northern reaches of the Kingdom by his decree; Duke Edward overseeing the town of Eastward and Duke George overseeing the town of Thistledelve in the north. There are numerous strongholds dotted around the countryside and various nobles rule each of these, as vassals of the king or the dukes.   To the north lie the Furrow Hills and beyond them The Jagged Peaks, dominated by the towering Dragon's Perch - an extinct volcano.   To the west lies the Elvenwood, or Sylvandale, the realm of a xenophobic Fey nation, where no humans are permitted to tread. Some light tree logging goes on along the fringes of the Elvenwood but no one goes too far in.   To the south, beyond the Barren Scrubs lies an uninhabited desert, completely devoid of life. It is said by the people of Albion to be impassable. Known locally as The Great Desert , in truth this region of wasteland and sands is quite small, and not far beyond it lies the state of Hishan.   To the east lie the lands of the Easterners, as the locals know them, the people Albion have been at war with for countless generations. The Easterners are a brutal race, ruled by an aggressive emperor, who will execute a resident of Albion on sight. Vast tracts of uncharted marsh, and the town of Eastward lie on the eastern borders. Also guarding the eastern flank of Albion is the forest of Eldaran. No one is too sure what or who lives in Eldaran now.   There are three major towns in the Kingdom: Littlebrook, the capital which lies in the south western corner, between the Elvenwood and the Barren Scrub; Eastward which lies on the eastern border, protecting the Kingdom from the ravages of the Easterners; and Thistledelve, which is situated in the northeast corner of the lands, near the The Black Swamp and the Furrowed Hills. Numerous hamlets dot the landscape between these towns, which are linked by the well-patrolled King’s Road. The King’s Road has three spurs, one to each town, and these meet at the village of Waymeet, in the centre of the Kingdom.   There are just three monasteries in the Kingdom that teach The Way, one situated nearby each of the major towns. The reason for the small number is probably that they represent the Easterners’ culture and most things from the east are viewed with scorn and suspicion by the people of Albion. The populace do not generally trust the monks and consider them spies. As a result, the monks tend to keep their backgrounds secret. However, since the Chaos Wars, when one monk was pivotal in helping save Albion from The Demon Prince, the study of The Way has become much more acceptable in the kingdom.   Barbarians roam the highlands and mountains to the north of the Kingdom and are uncommon but not unheard of in the northern reaches. Numerous tribes of these filthy humans mix and breed with the Orcs of the mountains and half-breeds are not uncommon. These men are known as the Feral. The fey homeland of Sylvandale lies west of Albion and is closed to humans by the isolationist queen that rules there. A few dwarves live in the hills south of the mountains, mostly in the northwest, and it is now known that a large stronghold of dwarves, called Khazagrim, lies somewhere under the western Furrow Hills.

The peasants are reasonably well looked after by the Royal Family and their vassals and generally the morale in the country is high. Taxes and tithes are also high, due to rebuilding of the country after the Chaos Wars, but the proud people of Albion consider this money well spent. The life of the peasants is nasty, brutal and short, but that is considered totally normal. Life in the peasant community revolves around the farming year. This gives structure to their whole existence.   The state religion of the Kingdom is that of the The Church of the Sun - an aspect of The Light. The royal family are devout worshippers and supporters of the church. The leader of the Kingdom’s religion is Cardinal O'Connor, an old and experienced campaigner who resides in the fabulous Cathedral in Littlebrook. The Old Faith, a religion based around herbal remedies and ancient knowledge of nature, still has some followers in the countryside but the effort of building a church in every hamlet in the Kingdom by the current King’s grandfather, Richard I, has meant the worship of the Light is almost unrivalled now. The two faiths get on reasonably well where they meet. As for the religions of the Easterners and crude barbarians, only they can guess. Demon worship is an all too common threat to Albion. Worshippers of demons are heretics and are burnt at the stake for their sins.   Standard cavalry units wearing the livery of their employer patrol the King’s Road. Sky blue is the colour of the northern army, navy blue the colour of the eastern army and royal blue, the colour of the King’s army. This keeps the road a very safe place to travel. Off the road however, things are not so settled, especially on the edges of the Easterner’s lands where red uniformed soldiers of the enemy occasionally launch raids into Albion’s lands. The Knights of the Sun, a holy order of warriors, protect the churches and clergy of the lands. They also help out in protecting the kingdom in dire needs but that is not normally in their remit. Local law enforcement is performed by the local sheriffs who work for the local lords.   Albion is an illiterate place. Only a very few can actually read, and these are generally the clergy. Books are a rarity in Albion and the only known library is located at Mount Macarack Abbey and is so important it has a Chapter House of the Knights of the Sun to protect it.   Heavy armour of any description is illegal to the peasants of Albion. The only people who are allowed to wear heavy armour are the nobility. In practical terms the only people who normally wear heavy armour are the Knights of the Sun. They wear the platemail of their station.

Humans are by far the most common race in Albion and live everywhere. Dwarves typically come from Khazagrim, but are sometimes seen wandering on their trade missions. Fey are almost non existent in the Kingdom as they have shut their borders - their only contact with humans is on the edge of the Elvenwood. A very few half-orcs can be found in the northern reaches. A few of the humans found in the Kingdom are of Eastern origin. They must be very careful to avoid getting lynched wherever they travel, but they are usually found inside the cloistered walls of a monastery, and anyway, the peasants fear Easterners enough not to attack them wildly, especially if they are unarmed!

Heavy armour is not legally available to the non-upper classes in Albion. Plate armour is available but only to Knights of the Sun. Trade in magical items is rare, but slowly increasing. Many such traders will be from Hishan, Honshu or, rarer still, the Wildlands and beyond.

Before the Kingdom of Albion was formed.

The Common Year of Albion is taken from the date of King Eldred's birth.