Suffer not the beast to live

The scarlet watch is paramilitary religious sect of cieldiric creed dedicated to fighting amalgaris and other mystical forces, the organization consist of a large number of zealous warriors, priest and theologians all under varying ranks from the lowliest of acolytes and priest to a grandmaster of its highest council

Strong zealotry and a warriors spirit is heavily valued within their ranks, it takes one with a will of iron, pure of mind and great strength to face the beast and emerge victorious

The scarlet watch have at their disposal a force of warriors and funded directly by the monarchs of the federation, they are even supplied by their very own blacksmiths and craftsman who provide them their weapons armour and whatever they might need to destroy sorcery and amalgari

In the early days of the federation the scarlet watch diverge from the primary cieldiric creed, founded by a group of zealous warrior priest who saw the need for an Amalgari and mystical extermination force they became it's first council, exterminating amalgari and things tainted with foul sorcery within cieldros eastern forest and plains, overtime the orders fame would spread across cieldros attracting warriors and and the faithful alike increasing their member count to be officially recognize as an seperate religious sect by the federation

Altho they hold no territory of their own save for the obsidian fortress and some dubiously acquired  infrastructure, it's members travel far and wide across eastern cieldros in search for amalgari to exterminate or new recruits to indoctrinate

The scarlet watch does not engage in conflict with other human faction and only engage combat against amalgari and mystical threat, as such they do not use conventional military strategies and tactics for fighting an inhuman opponent   They form execution teams that are akin to hunting parties rather than a military squads to seek out and destroy their target using their combat skills and deadly weapons to deal significant damage to fell even an Amalgari beast

Members of the organization follow the tenants of the red doctrine, a strange mix of religious belief and militaristic guidelines it emphasizes the need for a pure riel where the amalgari and other blasphemous threat needs to be utterly exterminated to protect the purity of the world

The scarlet watch is often awed and revered by the cieldrosian frontier man as they hold a firm presence within the frontier region which is known for amalgari and other strange activity, the more "civilize" citizens of the federation are more suspicious of the organization however labeling them zealots at best and heretics at worse, the other factions to the east hold neither respect or contempt torwards the organization as interactions from each other is often quite rare

Early on the organization teaches it's members in the ways of the sword and put them through harsh training regimes, alongside this they are also encourage to learn more scholarly and theological pursuits but this is often only allowed to it's devoted of members

As those of the cieldric creed believe that Solur's light is a tool of salvation, those of the scarlet watch believe it as a weapon of purity and judgment , armed with faith and steel they believe that by their hands they can bring down the judgment of Solur's light upon their foes, cleansing the amalgari beast and the blasphemous sorcery they bring through purifying fire and ridding the land of corruption as their god intends

Being a religious organization centered around the slaying of amalgari and mystical forces, it's tenets are relatively strict and are heavily enforced to retain faith and discipline in their warriors,   Its many laws forbids their warriors from ever leaving the organization, forming deep bonds or any other unfavorable pursuits that would distract them from their singular goal

Most often it's members would regularly meditate to Sulor on a shrine of altar, other times they would carry out sparing matches that are seen with the same reverence as a religious ritual to test out theirs and their comrades own strenght

A lowly warrior can climb the ranks of the order by preforming great acts in battle and being devoted to his holy fight against   Those in the upper echelons are usually powerful warriors who have attained their status through many years of fighting in battles, they oversee the entire operation of the scarlet watch like commanders but act and speak in a manner similar to priest and skilled orators, often are the ones to carry out rituals and other activities 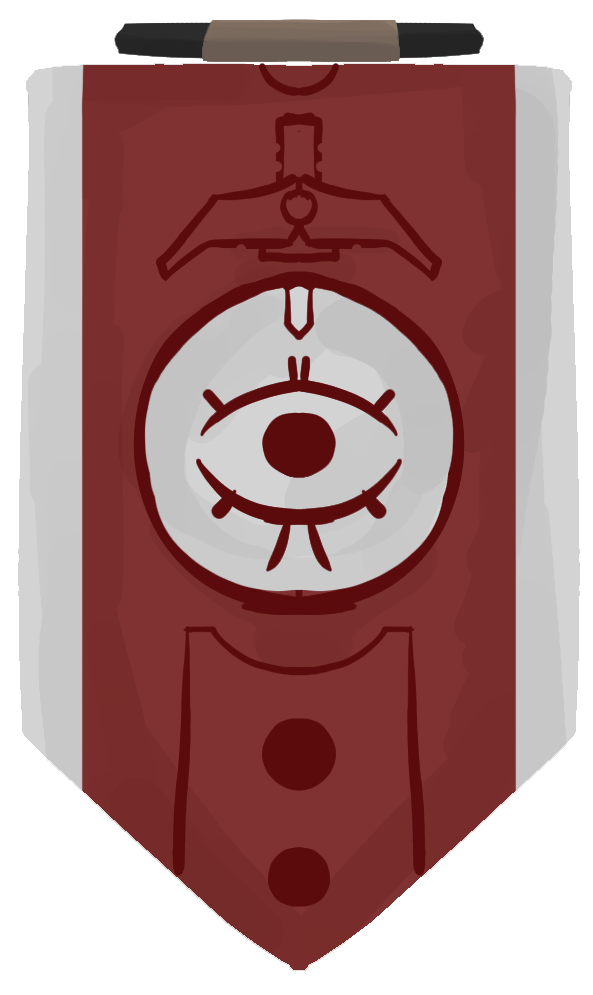 "Suffer not the beast"