A disease feared by many a sailor. Most of them know of staggers and jags as during their days at sea they most likely have seen a fellow crew mate suffering from this dreadful disease.

It most often happens near the end of long voyages, especially when journeys take longer than expected. Trembling madness does not discriminate and affects ratings and officers alike.

The first symptoms of Staggers and Jags are sweating and tremors, soon followed by anxiety attacks. Fear of shadows or seeing little critters everywhere are common among patients.

This is soon followed by restlessness, all round confusion, disorientation, loss of memories, and a loss of the concept of time, which will lead to insomnia.

Together with the pre-existing condition, the insomnia will only lead to worse psychosis, terrifying hallucinations, loss of balance and motor skills, which will lead to aggression in the clearer moments.

This is all due to the absense of the cause that contributed to the status of the patient before he fell ill with stagers and jags, they can get over this with time. 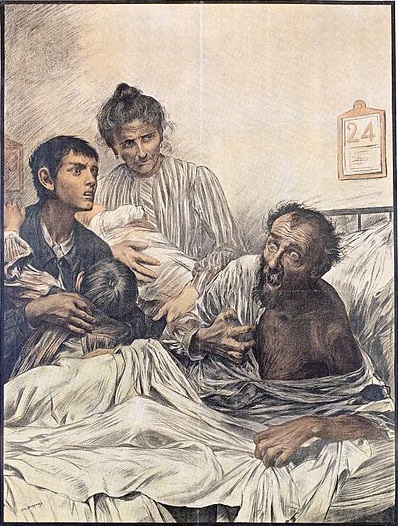 A man suffering from Staggers and Jags, surrounded by his terrified family. by Science Museum Group (UK)

There is no cure in the form of potions or medicine, but the cure of time. The body must get used to the new status, and readjust all its settings. Staggers and jags is a transfer period, resulting in the patient being removed from causes that dictated his previous stable condition. This readjusting takes time and is unpleasant. Some patients can do this in hours, most take several days, some even weeks. And even others don't survive the disease at all.

Some patients seem to be getting better fast, but then suffer from relapses hours or days later. One must be carefull of that.

Besides the body, there is also the mind to take care of, which can take years to adjust fully.

If the patient seems uncurable, or they are needed now for ship's emergency reasons. You can bring them back to the settings before Staggers and Jags struck, by re-exposing them to the causes.

Lasting from hours to days, or even several weeks(rare). fluctuates in severity.

Because being drunk, especially continuously, is a reason to dismiss a crew member from the ship. This was sometimes, if it was a good working crewmember or a very well-liked person, kept hidden. And they attributed the symptom to other diseases, Malaria being a handy one.

Staggers and jags results from alcohol withdrawal. It often starts two to three days after the patient stops the intake of alcohol.

The most people who suffer from it have been drinking their own high percentage liquor in secret and are the ones that seem to be acting normal while under the influence of alcohol.

This is one of the reasons why there used to be a ship's supply of a daily ration of alcoholic beverage. This covered the 'need' of the crew without them drinking too much. In modern times the amount of alcoholic beverage a crewmember can have in a certain period of time is limited.

"But WHY?!, WHY is the rum gone?!"
Screamed a victim in one of his clearer moments.

Answering: "a medical condition which is feared by some"
Visit Jacob-W's Competition Page Check all other answers to this prompt Competition Homepage

In response to: Summer Camp 2021, prompt 2: A medical condition which is feared by some.

I like how I had to wait to 'Causes' to understand what was going on, very witty! Loved it.

Interesting article! I love the historical aspects :D   "The body must get used to the new status, and readjust all its settings." I got a bit confused by this sentence as it's lacking context. What's the new stats and the settings the body need to get used to? You only talk about alcohol in the next section so you need to add something here so that the sentence makes sense. Maybe saying that the patient is isolated and closely watched and that's what they need to get used to?

Thank you for your comment, I did add some to the parts Progress and Cures. Hope its a bit better now. I find it hard to not 'spoil the surprise', which is in the last part.

I was wondering the entire time what the cause would be. But then finally, it all made sense. It fits naturally into your setting. Well done!

I drank all the rum, that is why it is gone. Great article

Great article! It was a surprise what the reason for the condition could be and then it became clear xp That also explained the side section that suddenly talked about being drunk xp (yeah I know I read sidebar at same time :p) Funny how they attribute it to another disease instead of admitting that they were drunk

Thanks :) Glad my attempt to hide the true cause to the end works. Well when drinking/being drunk is reason to be sacked and left in the next port, you might want to hide it.