Due to historical events, the zero point of time zones, and the measurements of longtitude, lays in England, in the town of Greenwich. Here they drew a meridian straight trough an observation center, declared it the Prime Meridian, and decided it was at 0°.

With the end of every town and city having their own time, came every country having their own time. Due to the cause of history and the globalisation, this got equalised, and neighbouring countries got the same time or rounded amounts of difference, usually whole hours. This created the introduction of Time Zones. Time zones are bands of countries with the same time, running North to south. The borders of this time zones are decided by politics and generally follow national borders.

But at sea where there are no national borders, the time zones are spread out more neatly. Every 15° East or West there is another time zone. Why 15°? A full rotation is defined as 360°, a full rotation of the earth is 24 hours. 360 divided by 24 equals 15.

But to make matters a bit more difficult, why would you make them easy right? The Prime Meridian lays in the center of the Greenwich mean time - time zone. So the borders lay at 7,5 degrees East and West.

If two people do this, one traveling East, the other West with the same speed, they would end up at the other side of the world opposite to the Prime Meridian. The East traveling person has added a total of 12 hours to from where he started. He is at GMT+12 as they say it.
THe person traveling west, has deducted 12 hours from where he started and his local time is GMT-12. Creating the odd situation that they are in the same time zone, with the same local time, but 24 hours apart!

Exactly here lays the International Date Line. Roughly at 180° East or West. But with some weird corners and exceptions because politics.

If the East traveling person would continue his journey east, he'd have to reduce his calender by a day. To match up with the local date and time, if he does not, and just keeps adding the hours as he crosses the Time Zones, he'd be a day wrong when arriving back in Greenwich. The West traveling person adds a day to their callender to make the date correct again.

When traveling East trough the time zones, +1 hour, and -1 day when crossing the IDL.

When traveling West trough the time zones, -1 hour, and +1 day when crossing the IDL.

"So you understand now why we have to change the date?" Chief Officer Jan de Jongh asked Michael, after a lengthy explenation and a few examples.
-"To be honest, I don't chief. But as long as you do it's fine with me. It's just nice we all live a day longer this year." answered the Boatswain
Sigh. "No you don't live a day longer, you just compensate for all the twenty-three hour days we had."
-"But we do get two Saturdays?"
"Yes, but..."
-"Seems like an extra day to me, chief."

What about UTC? I can hear you think. UTC, Universal Time Coördinated, is the scientific version of GMT, and for everyday use they are the same time. And they basically only differ in thier definition.

When a country canges to summer time, they basically jump time zones with the whole country. Going from GMT+0 to GMT+1 to take Great Brittan as an example. Not all countries in the world do it, and those who do don't do it on the same date either, to make things nice and complicated.

See here what a Golden Dragon has to do with the International Date Line:

Sailors are famous for their tattoos, but what do they mean? 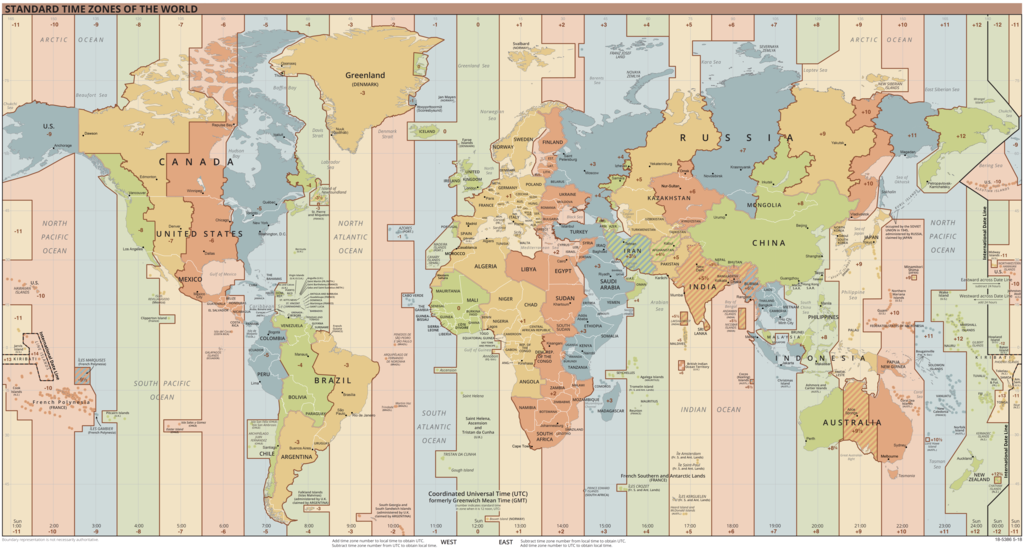 Map of current (5-12-21) official time zones. by USA-CIA via Wikipedia