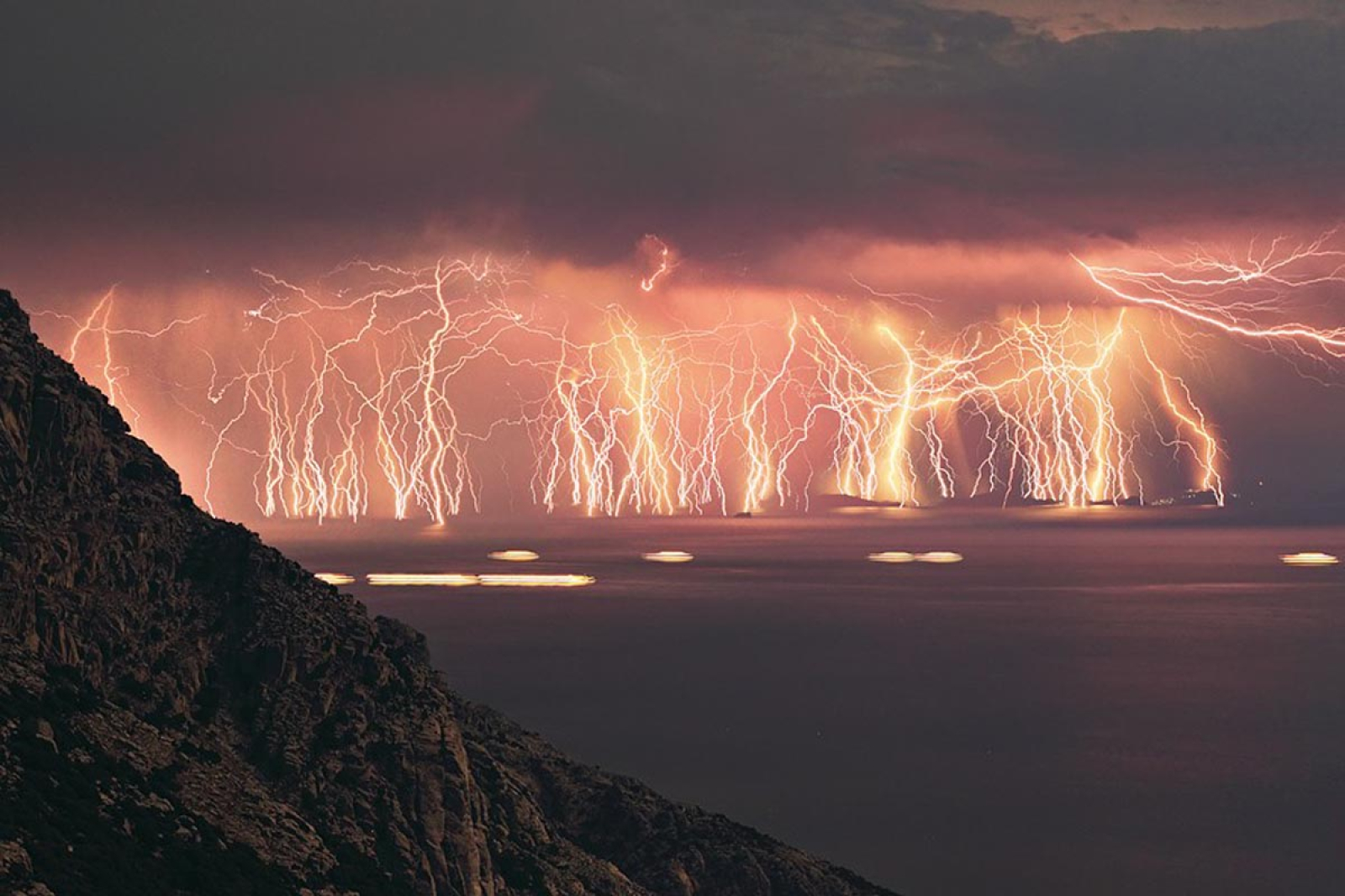 "The man you seek is secluded on the island of Thunderlake, protected by an everlasting thunderstorm. To reach it, you'll have to tread carefully between the thousands of lightning strikes and deafening thunder."   "Wow. Is he a retired great mage or something like that ?"   "No, just a regular, powerless hermit. Why you ask ?"

Thunderstorms are pretty scary, eh? Luckily, they rarely last long. An hour or so before they fade away or move to torment the next area. Now, what if I told you that there is a ground struck every day by hundreds of lightning bolts, all year long? And not a place in some fantasy setting, but somewhere on our Earth.

This phenomenon occurs in Venezuela, at the mouth of the Catatumbo River, where it meets the lake Maracaibo. About half the year at night, storm clouds form above the lake, and lightning bolts can be observed at an extravagant rate, up to 28 a minute. In total, the ground is struck above a million times in the year. The otherwise clear sky allows the lightning to be witnessed at over 500km of distance, and light the whole region. Hence its other name, the Beacon of Maracaibo. 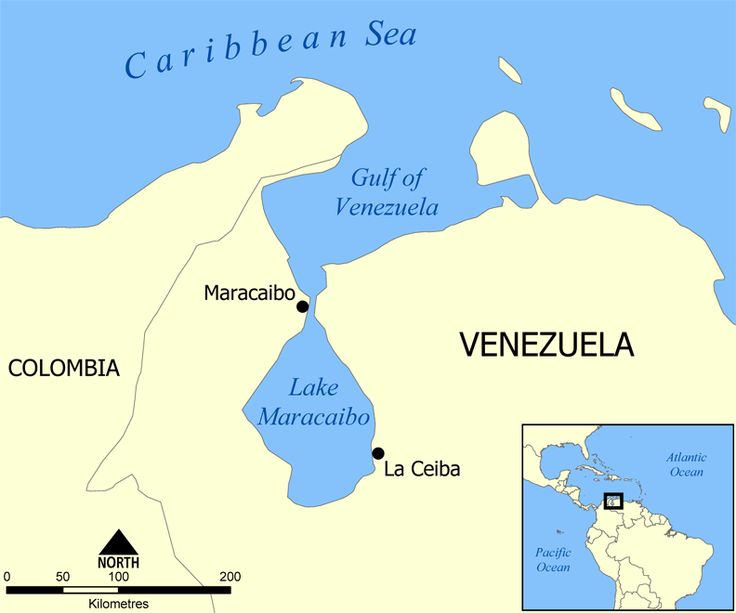 Through the years, many hypotheses came up to explain the cause of these peculiar storms. They are all somewhat valid to use in a fictional context but bear in mind that only the first one of the followings is acknowledged as the current answer by the scientific community.

The lake is surrounded by high mountains, altering the wind patterns. When the wind picks up speedand the sun comes down, it forms a specific current, called low-level jet stream. The air is heated all day long by intense sun and the wind collects the heat and moistness. On the southwest side of the lake, the wind meets high mountains and is forced to go upwards, as the electrical charges it contains are discharged into the atmosphere, birthing storm clouds. Then, the colder winds descend and create convergence patterns at the surface. These patterns help maintain the electrical instability and the hours-long thunderstorm. It stops at dawn when the nightly low-level jets weaken and don't fuel the lightning anymore.

Though it has never been proved to be true, Andrew Zavrotsky thought that the presence of uranium in the bedrock of the lake was the cause of these events. It seems unlikely in our reality, but if your world has peculiar stones that can influence the winds or even the thunder, then it becomes plausible.

Nelson Falcón suggested another hypothesis, bound with the presence of methane in the air above the lake. According to his idea, the winds collect methane which is the cause of the lightning. Again, this hypothesis is pretty weak, since the methane part of the atmosphere above the lake isn't that great, and many areas around the world have way higher amounts of methane, without the eternal storm. 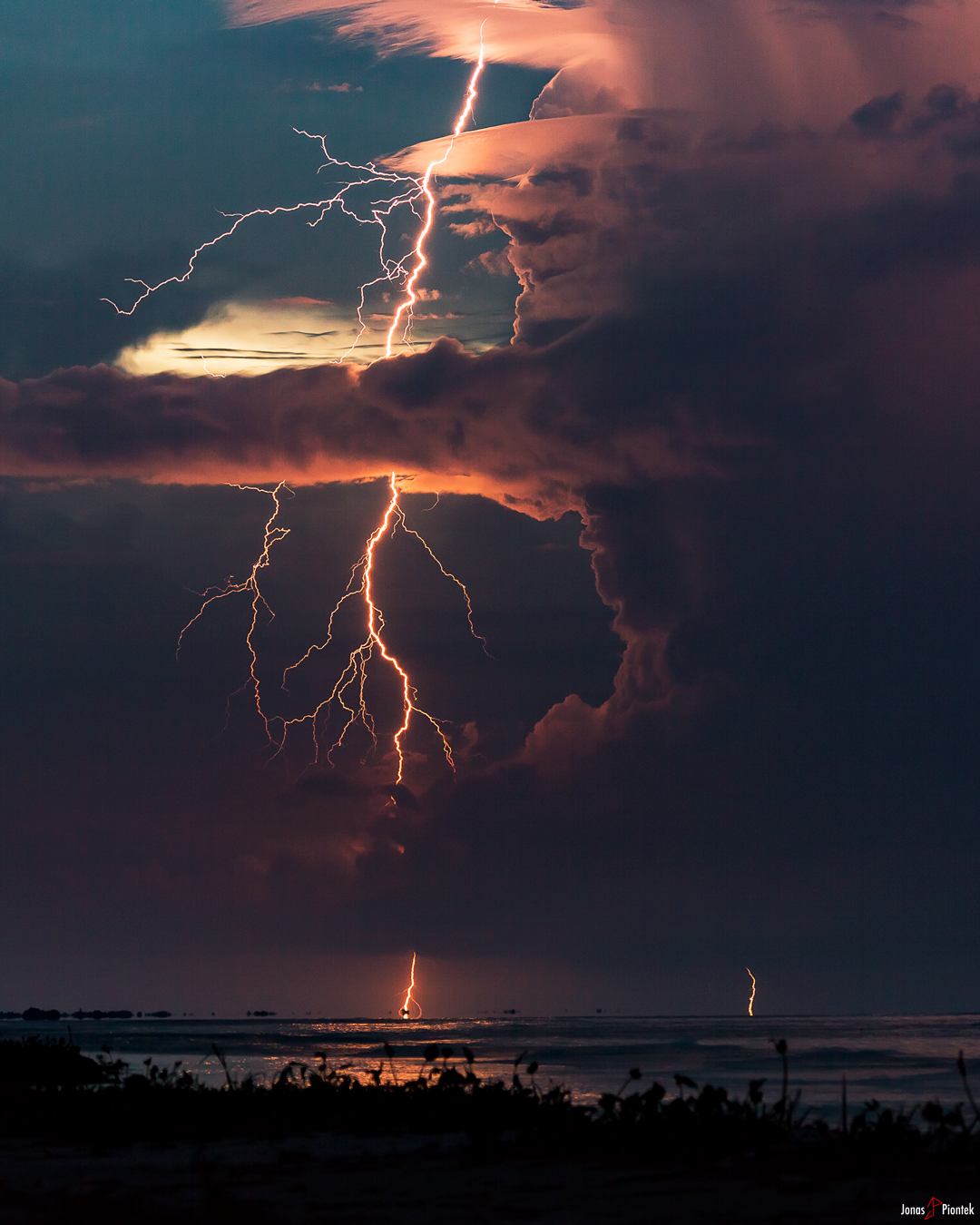 The beacon of Maracaibo earned this nickname, as it illuminates the sky in a radius of 400km. Sailors, on the lake as on the sea, were guided by the brightness on nights when the Caribbean sea was almost clear as day. The Wari people believe the storm to be the concentration of millions of fireflies which gather every night in the Catatumbo to pay tribute to the fathers of creation, after their mythology. Other ethnic groups, the Yucpas and Wayúu, instead think that it is the presence of the spirits of dead peasants that shine to tell a message. They also consider it as the "eternal glow in the heights".

The phenomenon once reportedly saved the city of Maracaibo, when in 1595 Francis Drake tried to sack it coming in the dead of night. Thanks to the brightness produced by the lightning, the garrison of the city was aware of the corsair's presence and managed to drive him off. The event was narrated by Lope de Vega in his poem "La Dragontea". Furthermore, during the war of independence, it served as a beacon for the naval force of the admiral José Prudencio Padilla and reportedly played a key role in its victory against the Spanish on July 24, 1823.

The phenomenon is nationally recognized, especially in the state of Zulia in the Northwest, which has a bolt of lightning in its flag to symbolize it. Its anthem also has a reference to the Catatumbo lightning : 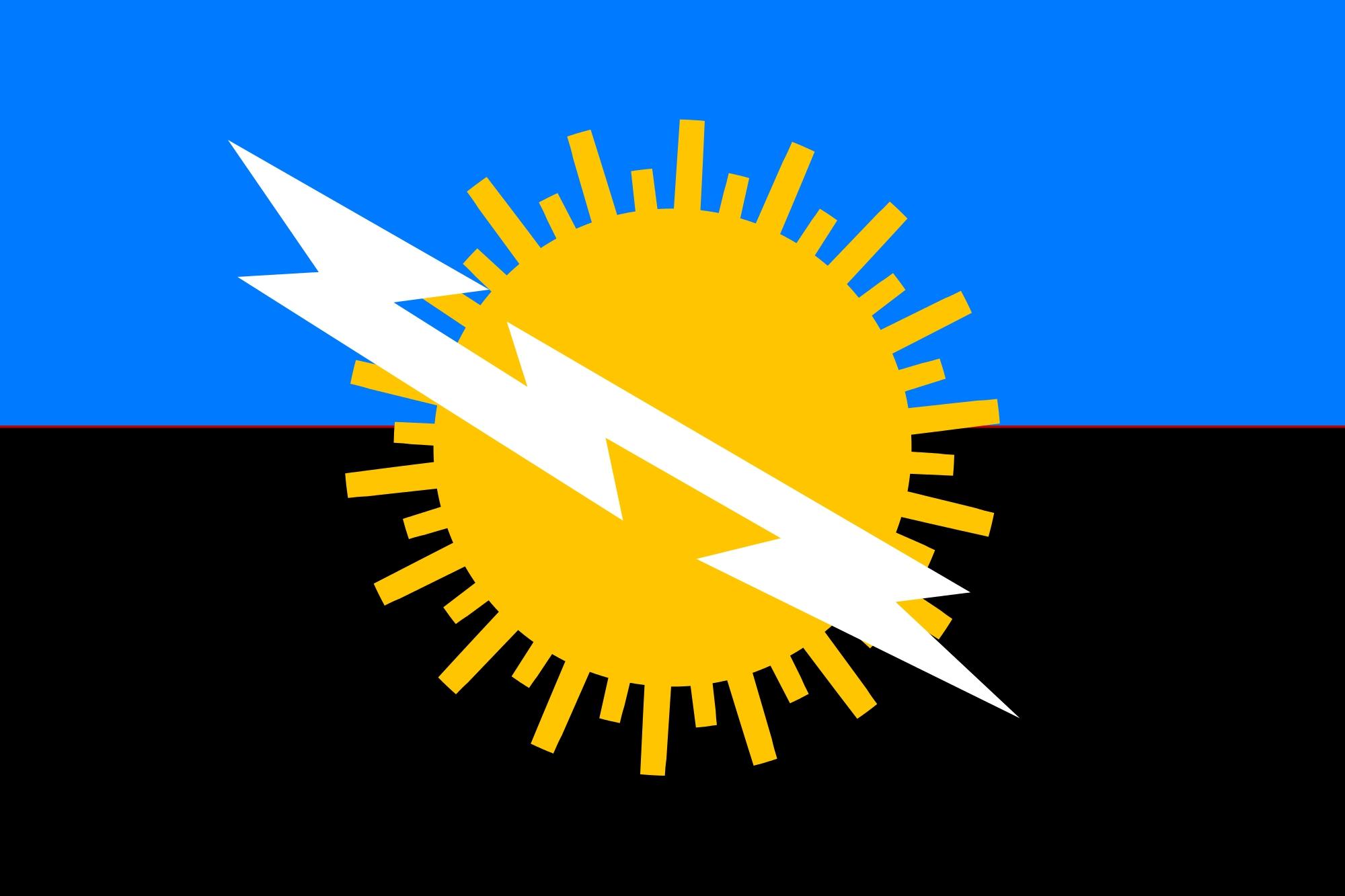 Flag of Zulia by José Antonio

The Catatumbo lightning can be found in many Venezuelan writing over the years. A gaita zuliana, amongst other Venezuelan folk song, refers to the thunder of Catatumbo :

Bear in mind that those are mere suggestions, and by no means strict guidelines you should stick to. They are here to help you focus your inspiration and give them a framework to work with, but nobody will get mad at you if you decide to throw them away. With this disclaimer out of the way, let's proceed! 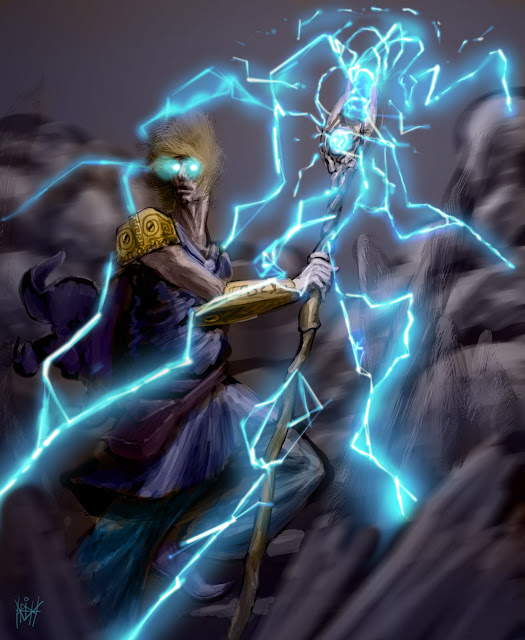 
To recreate the Catatumbo lightning in your world, you first need a lake surrounded by high mountains, preferentially under the tropics or in a hot area. Remember, it will illuminate an area in a radius of hundreds of kilometers for the majority of nights. If you put plains around there, like there are in reality, there won't be many hiding places. And unless you are deep inside the land, bear in mind the sea will probably be illuminated too. It does wonders as a beacon.

How your people will view the Maracaibo beacon is up to their technological advancement. More primitive cultures would probably put some religious, or at least mythological meaning in this phenomenon. It could be the manifestation of the god of thunder, protector spirits, or whatnot - beliefs can be anything, really. If you got sailors, no doubt they rely on that to guide them at night. Or quite the opposite, such a surge of lightning may frighten the locals, making the whole area devoid of people.

On the other side, more advanced societies might want to unravel what makes the storm so persistent, using a handful of tools and means of measurements. An advanced civilization that fully understands what is happening and manages to harvest the unfathomable energy produced by this much lightning, for instance. Tourists are drawn in numbers to see such a unique thing. Depending on the management of the area, it could become a hotspot of tourism, maybe thrill tourism, as nowadays multiple fishermen get struck by lightning when fishing at night.

Even though it is a natural phenomenon, it may be considered magical in a world where such a thing exists. A funny thing would be a brotherhood of great magicians trying to dispel the storm only to be puzzled when it doesn't work, thus thinking of a being with much more power than them. It could also be the inspiration for greater spells or a topic of magical research.

Careful when flying around, however, the storm perturbs heavily aerial traffic, and can affect the whole Miguel Urdaneta Fernández Airport. Definitely not a good idea to take a plane there, unless you have a very good reason, or are trying to lure pursuers to their doom.

All kinds of senses are to be taken into account while writing. If the phenomenon is visually wonderful, it is not as noisy as a thunderstorm of this size would suggest. Since it happens very high in the sky, most of the sound dies out before it reaches the ground. No doubt that the view will amaze your characters, no matter how they are used to seeing incredible things.

In your writing, explaining in detail the phenomenon might make it dull, unless you know what you're doing. However, playing on the mysterious aspect, for example through religion, mythology or magic reinforce the sense of wonder surrounding the thunderstorm. This works best in not very scientifically advanced settings, and to make it work in a modern story you may need something else. Taking the example from before, a plot revolving around the lightning-harvesting plant puts the explained wonder in a central spot, without taking the interest out of the reader.

If the Catatumbo lightning is part of your adventure, it will probably happen at night. Then, you probably want to mitigate night effects since it will be clear as day. As to why they would go there, the place does fine as an evil guy's lair or the restplace of some legendary artifact (think Lightning elementals, the Prince of Thunder, the Staff of Storms...). It can also serve as a surprise travel encounter. Since the storm mainly takes place at night, they may find themselves rowing on a peaceful lake in the evening only to witness hundreds of lightning bolts pop up in the sky. Now they should quickly get to the shore before getting struck. Remember that it doesn't happen every night, so it would be no surprise if the characters did not notice it sooner.

SKYbrary, information and impact on aviation

Research on the myths of the Thunder of Catatumbo, in Spanish

NASA article, about the studies of the phenomenon

The floating table of content is slightly adapted from nnie's amazing CSS.   Thanks to all the amazing people who proofread the article, gave me guidance and reassured me in the direction I was taking! This article is only a pilot for what I hope a project which would help people find inspiration in real-world wonders. I want to make it as good as I possibly can, so any feedback (even the most negative) is very much welcomed!

I really like the premise of the world you have set up, I think that the art is beautiful also.