Welcome to my glorious, new campaign. I have made this hand-out for you as a manual to create your character in my world. I would recommend going through this manual step by step to ensure a fully-incorporated character that ties well into the world. See the checklist on the right side of the page to keep a clear overview.

We are of course going to use the rule of Dungeons and Dragons 5th edition, but leveling will be a bit slow. But do not fret, as a lot of focus lies on downtime activities and learning new things outside of the advancements that D&D gives us. Speaking about downtime activities, we will play with my own version of long/short rests. For short rests, the only change is that you cannot use hit dice to regain HP. For long rests, this means that you will not regain all of your HP and half your hit dice. Instead, you will get the opportunity to use your hit dice to regain HP in the way it would normally work during short rests. In order to regain hit dice, you need to spend a certain time (maybe a week, I don't know yet) on downtime activities.
Show spoiler
YAAAAAAAAS. I'M DONE HAVING TO PLAN 3 COMBATS PER DAY SO PEOPLE WILL ACTUALLY VALUE SHORT RESTS AND USE THEIR HIT DICE FOR ONCE. NOW YOU WILL FEAR LOSING YOUR HP, AS YOU JUST HAVE A FEW HIT DICE LEFT AND YOU HAVE TO WAIT UNTIL YOU HAVE TIME FOR DOWNTIME ACTIVITIES, WHICH. WILL. ACTUALLY. BE. AMAZING. FOR. CHARACTER. PROGRESSION. End of rant, continue.

So, downtime activities. Your character will start a little weaker than a normal D&D character would, but this is to ensure that there is enough room for advancement, without having to use level-ups as often. Every time you want to spend time in a city to do stuff, you can do whatever that city allows you to do. Think of things like:

Firstly, forget the stats that a certain race gives you. Choosing a race will primarily determine where you come from and what kind of cultural and personal background you have. Secondly, don't forget that wherever your background takes place, when the story begins, your character will be in the Empire. Keep that in mind when choosing a race/birthplace. Also, choosing a birthplace outside of the Empire will make a part of your history harder to tie into the story. 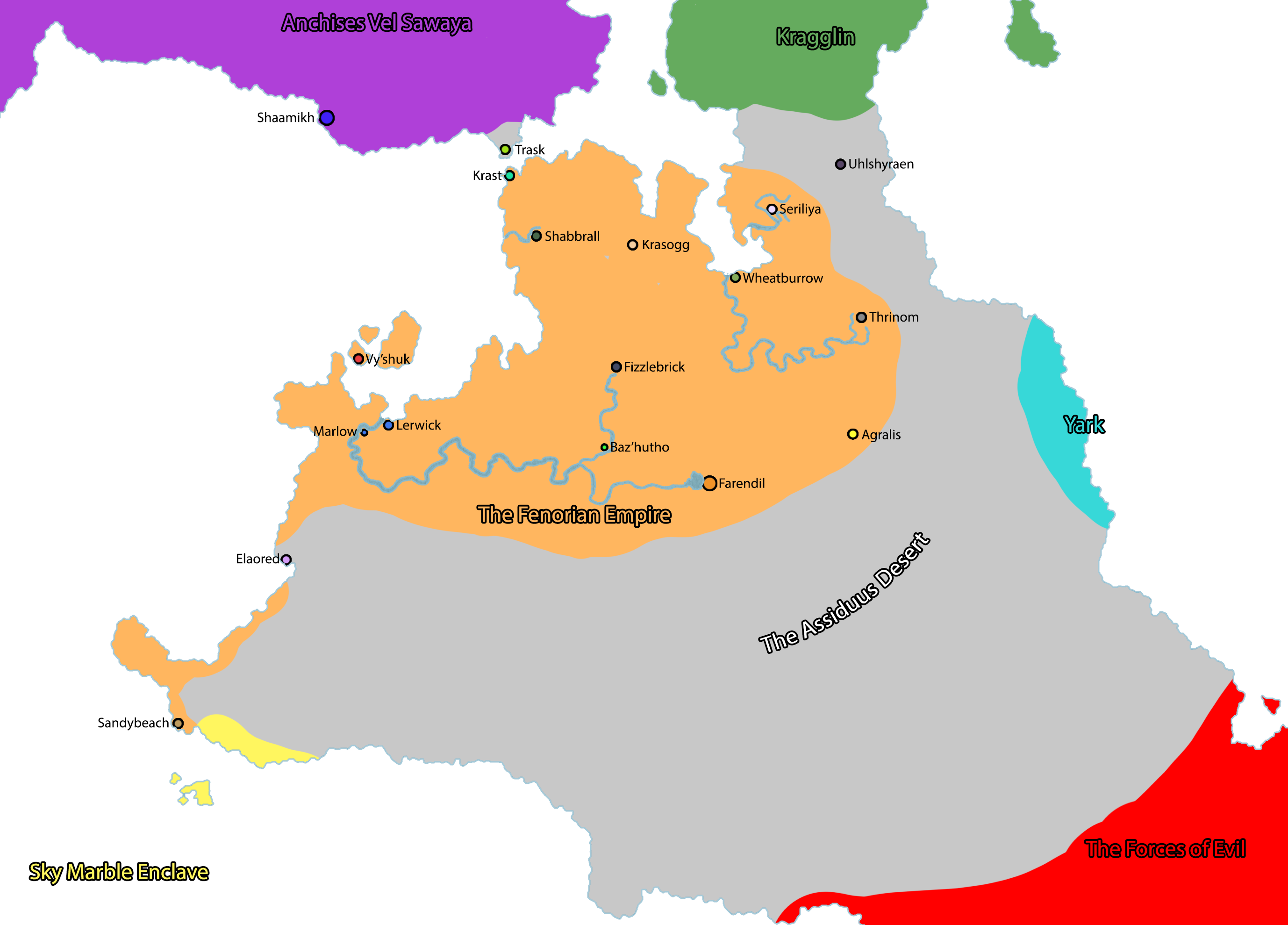 Options for every race Dragonborn Dwarf Elf Gnome Half-elf Half-orc Halfling Human
For Humans there are different ethnicities. Tiefling Something else
Every homebrew race is possible as long as it isn't too outrageous, just tell me in advance if you want to play something special.

Outside of the Empire, you can make of your class whatever you want, but it is good to know how all of the classes function inside the Empire. Also, these are just some ideas. If you want to know if your idea would work as well, just ask me.
Barbarian Bard
Should fit in every society I guess. The bard can do everything and does it well, so do whatever you want. Travelling bards have an important role of spreading knowledge about other nations or cities, because not many people travel due to the danger on the roads.   Cleric
Clerics in the Empire can be loyal to 1 of the 4 spirits. If you want to play a Cleric domain which is not based on the PHB, choose one of the 4 spirits where it fits most. Clerics take an important role in communicating the will of the spirits. A cleric focuses on protecting the domain they have chosen (or the domain has chosen them) and act as a physical form of the spirit it serves. You could find a cleric in a temple or serving an important, governing person, giving them advice based on what the spirit tells them. If you're not from the Empire, go for whatever Deity you want.   Druid Fighter Monk Paladin
Paladins who serve in the Empire can be loyal to 1 of the 4 spirits (Earth, Wisdom, Soul or Struggle). They don't care about the domains, they just fight for what is important to their spirit. Paladins can be found among the army of The Fenorian Empire, but can also be on their own quest of course.   Ranger Rogue Sorcerer
Sorcerers are very rare, but the people who do have sorcerous bloodlines, most often become important figures within a government and some work as mercenaries. There are many noble families throughout the empire that have sorcerous bloodlines and having such a bloodline is something many nobles show off with. Commoners often despise these people and are disgusted by their pride and elitist manners. This is why many commoners who have a sorcerous origin often don't explore powers and just live an ordinary life out of fear of being different.   Warlock
It is possible to be a Warlock with the Empress, Elyria as patron. All other Warlocks are seen as traitors, as they hail the forces that once destroyed their lands. If you are a Warlock, chances are that you are living in the wilderness/forests or hiding among society.   Wizard
It is almost impossible to become a Wizard. It is not about reading a few books and learning magic the "Harry Potter" way. Becoming a Wizard means having another Wizard personally teach you. Most Wizards however value their time too highly to take the time to teach anyone. If you want to play a Wizard, expect to be having a hard time. Other/Homebrew classes I'm okay with homebrew classes, even if you make them yourself. Just let me read them through first.

Present your choice to your DM and wait to get a reply with some valuable information that is going to help you start the remainder of you character-creation-journey.

4. Start of the Campaign

At the start of the campaign, your character is on their way to one of the following cities Marlow, Lerwick or Elaored. You could also be on your way to Lerwick just to take a ship to Vy'shuk or to wherever you want. Check the map for your current location. Think of why you are on your way to one of these cities, what are you going to do there, how long do you intend to stay there. It could also be that you're going in the opposite direction and are travelling towards any other city in the Empire (check the map). In that case you would coincidentally meet the others at the same point. Whatever your destination is, you are not travelling alone as the forests are very dangerous. You are travelling in a convoy with primarily merchants, some soldiers and a few mercenaries, paid to protect the convoy. 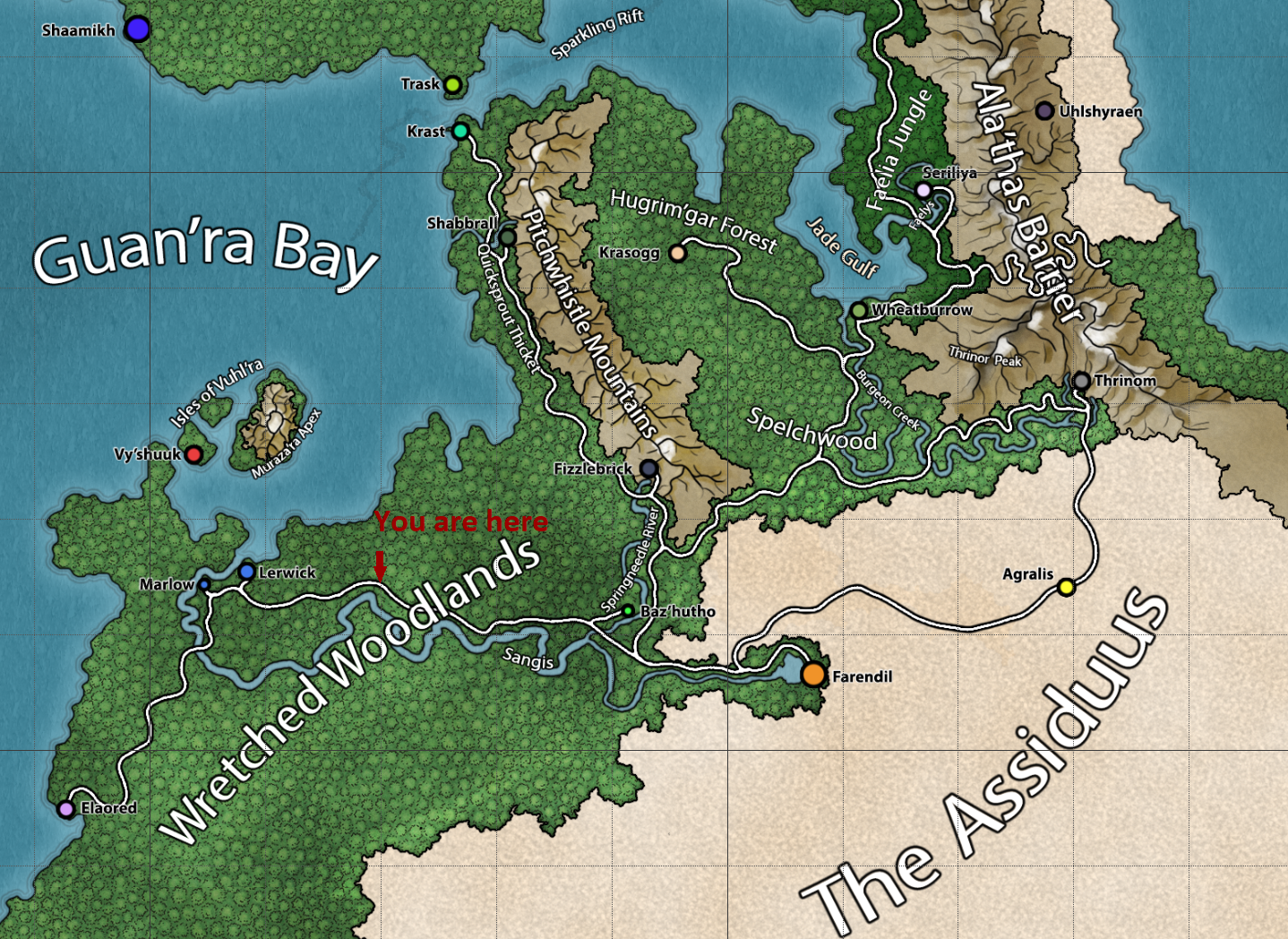 Normally, you would choose one of the x amount of backgrounds from the player's handbook. I prefer to follow the PHB a little bit more loosely, so I would like you to come up with your own background. Also, for D&D it is standard for your character to be an "adventurer" at the start of the campaign. I would instead like to start off with your characters having some kind of occupation. So determine what your character would be doing normally to earn money or sustain their life, how they spend their free time. But, keep in mind that your character should in the end of your backstory tie into the start of the campaign's story.

The Empire recognizes only the 4 Spirits as their deities. Most people pray to every spirit, but most have a favored one. Often this is because of the job they have or the environment they live in. A farmer would most likely pray to the Spirit of the Earth and maybe Soul. He wouldn't care that much about Wisdom and Struggle. When choosing a religion, keep this in mind. It is also very well possible to follow none of the spirits. This could be because you don't think they exist or you are just indifferent about it.

7. Check back with your DM

Now you have an idea of what you would like to play. This is the point where you will meet your DM in real life OwO. With the ideas you have, we will figure out what would work and how and where and when. We will also roll stats and determine proficiencies etc. After that, you're free to write a few pages on backstory or make a book out of it.

How does your character behave? Choose one word for every category. The words between the brackets are just examples, you may of course use your own words to describe your character.
Social: Decisions: Dire Straits

9. Write the rest of your background

Use the following points as a guideline to write your backstory. TL:DR Probably

1. Choose a race.
2. Choose a class.
3. Let your DM know what you want to play.
4. Decide how your character ties into the start of the campaign.
5. Think of a short idea for a background story.
6. Consider religions.
7. Meet with your DM to check your ideas and roll for stats.
8. Make a personality.
9. Finish your background.