Art by Maria Schepochkina. Ineia named after friend and best shrub <3
Shairdsmire is a small village cradled within the Slumbrous Swamps of Drutha. Avoided by most for the past 40 years or so because of the adult black dragon and her entourage of black Dragonborn and Kobolds living nearby within the Felsen Highlands, and who have had the village incarcerated beneath her shadow, threatening the lives of any who attempt to leave. In recent times, Shairdsmire has found its freedom from this tyranny and is now looking to rebuild its place in the world, having been closed off for so long. 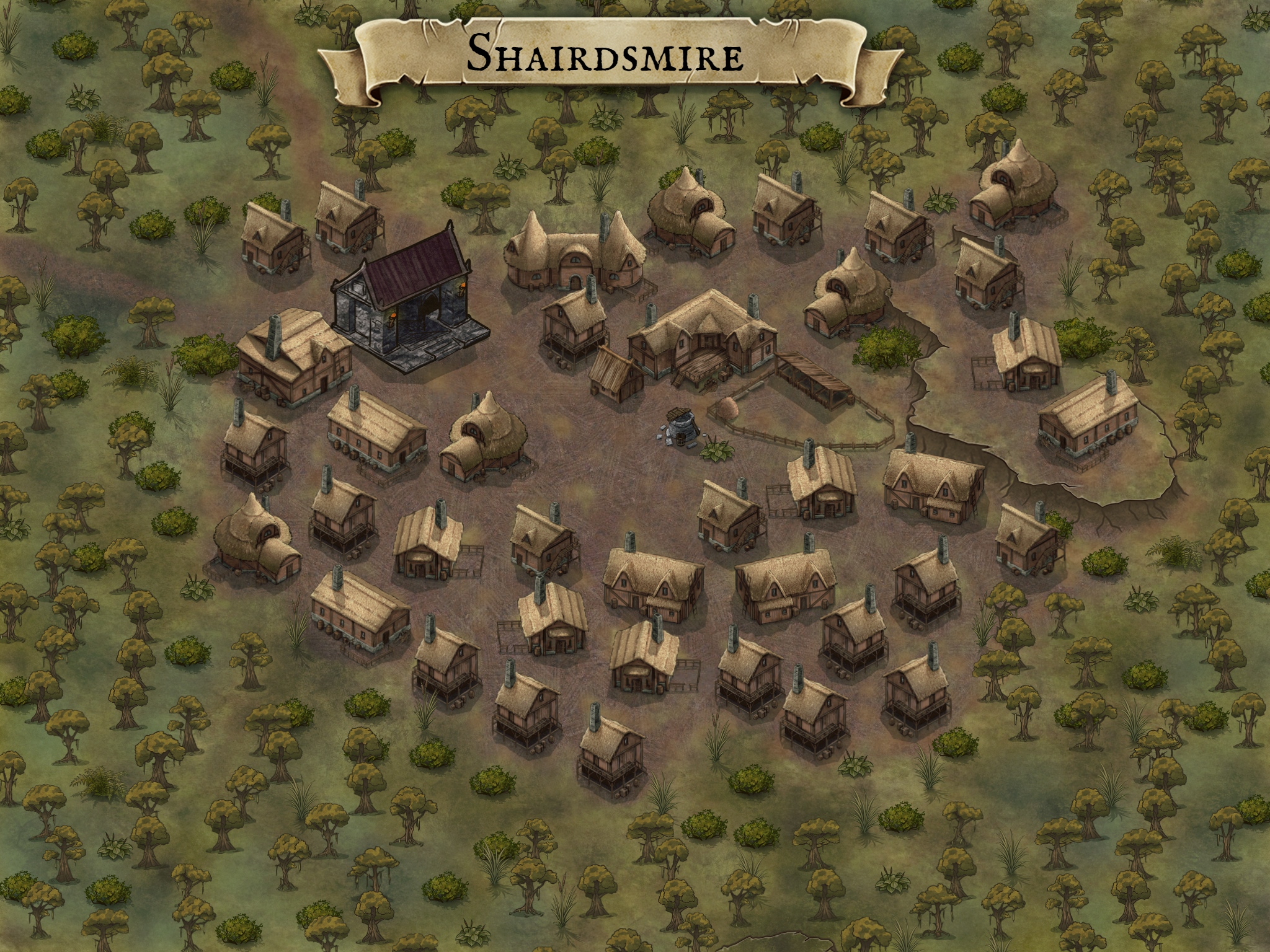 Built centuries ago for the swamp and woodlands it is nestled within, Shairdsmire's humble wood and daub buildings are built raised a few inches above the often wet and sometimes flooded dirt paths beneath, thus keeping the denizens homes as safe as can be from the wet weather that often descends from the mountains in the form of rain, occasionally bringing the floods with them.   Though ramshackle, Shairdsmire is not without its amenities. The Gilded Toad tavern offers basic and affordable beds for travellers (or those who may need a bed away from home after a night of too many ales), as well as local foods and drinks grown and made right within the village. Innkeeper Danil may not seem the most welcoming man but he makes up for it with his reasonable prices and the hard work he puts into his pub and the livestock patch he keeps for his goats.   The Chapel of the Seven sticks out like a sore thumb being the only building here built entirely of stone. Cared for by Adela, the village's resident priest, the chapel is a hospitable place to offer prayers, offerings, and reverence for the Common Man's Pantheon featured in the simple limestone carving upon the dais, though not many do these days. It can also be a nice space to take a break by the blazing fire in the centre of the room from time to time. The winding staircase close to the door leads to the cellar, which features a vault for potential valuables, stone slabs to hold the dead while preparing for funerary rites, manacles in case of criminal activity, and storage space.

Generally speaking, the Shairdsmire villagers stay out of the swamp because they know it to be a dangerous place, particularly at night. The Swamp Snare alone could kill you with its terrifying spines, if not have you starve to death as you remain caught in its grapple, not to mention the frightening fauna that calls it home. That said, the wildlife and plant life is vibrant here, featuring much flora used in medicine, and it is little wonder the founders of Shairdsmire built their village where they did. It features a convenient wooden path atop its shallow waters, heading west towards a mountain path leading up.

Veliko Kulak is Shairdsmire's reeve. Though he may live in the largest home in the village, the reeve's manor, and wear fine cloaks, he is known to get his hands dirty and help the other villagers at the barn, not one to tout his station. He lives with his husband, Aelfric, and is well-loved by his people.

Around 40 years ago, Ivnieth moved into the western mountains and descended to intimidate the citizens, telling them that if they did not bring to her their greatest treasures at the turning of each season they would be her next meal. Many tried their luck with escape, soon discovering the black Dragonborn and Kobold soldiers she kept in her company were skilled archers and were keeping a watchful eye on the people's movements. Other folk attempted to raise arms against Ivnieth, pulling together an uprising with volunteers from Helzand, a close-by village though they did not to return. The Shairdsmire citizens soon realised that this was to be their lot in life and word got out to the surrounding area to avoid Shairdsmire for the danger was not worth it.   Several weeks into the Autumn of 3421 FE and there had been no sign of either the dragon nor her soldiers who usually entered the village to collect the routine offering. The reeve sent out requests for skilled peoples to offer their help in investigating, whether they can finally begin rebuilding their lives after decades of servitude or expect Ivnieth's return, and a group of four fresh-faced adventurers was formed. They discovered that Ivnieth had been brought low by an ominous group with ties to necromancy and taken away, leaving Shairdsmire free to rebuild.