The Lybweg is a broad, stone road connecting Bezélan and Shevezz City. It was constructed after the First Destruction as part of a trade and non-aggression pact agreed at the Table of Accord (Skip to History).   It is the only safe way to approach either territory, without being seen to breach the peace accord. However, the right of passage was only permitted to everyday citizens and traders. Anyone associated with the leadership - either directly or simply as a worker for a leader - had to have a prior, written agreement before crossing the border.   As an example, Mia - a stablekeep at Timri would be permitted to cross in either direction. However, Farynna and Klor'asq, despite being servants of the Crystal Circle, would be required to obtain - and provide - proof of authorisation. This is because they served the Circle, who advised the King, therefore they would be seen as involved in the leadership structure of Qal'ath.

There were only two physical signs of the ending of the war of the First Destruction - the Parchments of Accord and the Lybweg. Thus, this route was itself a symbol - and a daily reminder of the choice of both kingdoms to cease their war, ushering in a new era of relative peace and co-dependent prosperity.
^ Article Sections List

The Lybweg (leeb-vayg) is a wide road, originally constructed out of white stone from Crescent Cliffs (the portion inside Qalathian territory) and dark grey rock from the Skarrka Bykla mountains in Shevezzi territory. It is the only route for authorised visitors and traders to pass between Bezélan and Shevezz City.   It is technically neutral territory, except for the portion entering Shevezz City and that beyond the gate of King's Yield Farms, which is Qalathian land.   Users of the Lybweg declare their intentions to be non-aggressive simply by walking or riding along it, as well as their openness to being challenged by either realm. Anyone known to be of the other's land approaching by any other means would be presumed aggressive and apprehended, possibly to await investigation and trial.
^ Article Sections List

While the Lybweg was originally constructed of equal portions of stone from both Shevezz and Qal'ath, its repairs have been carried out ad hoc and not with strict adherence to using the same stone either. But apart from that, no other alterations have been made to its route or composition. Both realms needed to maintain its integrity to ensure a flow of (authorised) goods and services therefore, even with Carnael II's laxness and laziness, Qal'ath's portion was still kept in a good state of repair.
^ Article Sections List

In the aftermath of The First Destruction, the temporary ceasefire between Qal'ath and the then Kingdom of Shevezz was reached in order that both sides could regroup and crown new monarchs. While that process was almost instantaneous in Qal'ath, the same was not true of Shevezz, where division over the successor caused friction for some time, as the rightful claim to the throne was in doubt. The previous King had no offspring, nor siblings, which led many to scour family lines and cross-matching such documents with the Register of Deaths to identify those who should, theoretically at least, be alive.

But diplomacy was still ongoing between the two nations and the then-advisors to the King of Qal'ath were given the authority to speak to the equivalent ranking officials of Shevezz. They reasoned that to send the King would give the impression that they would be imposing their will during a time of unrest for Shevezz. Thus a final peace agreement was reached that acknowledged both realms were a danger to each other due to their proximity. 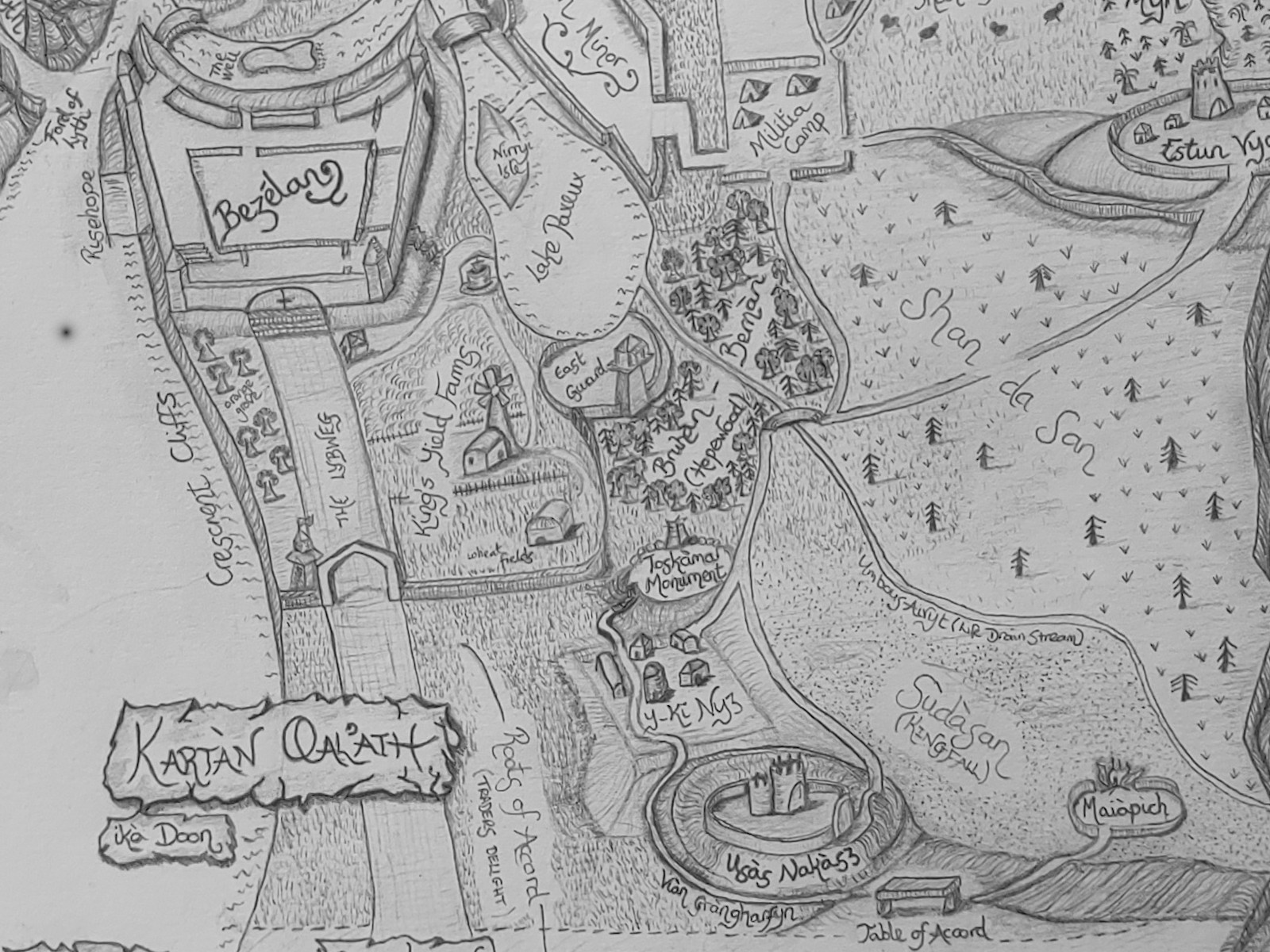 So, both territories would strengthen their borders and check any and all visitors arriving at either capital city. Both casual visitors (such as tourists or researchers) and traders needed certificates to enter Bezélan or Shevezz City and that authorisation had to be renewed every month (agreed at 27 days, or dagà in Foyiitùn).

In order to facilitate an easy monitoring method that both maintained strong borders, yet give the impression of openness and cooperation, the Lybweg was constructed. A massive highway stretching from Bezélan to Shevezz City, it would be the sole approach to the other's territory not deemed to be aggressive. Initially, a white-painted, high fence was erected either side of the route while the actual road itself took nearly ten Ana (by the Qalathian measure, by the grace of Shevezz) to fully construct.   The agreement stated that the stone used in its construction was to be sourced, half from within Qal'ath's borders and half within Shevezz's. Both had to be different types of stone so that The Lybweg's design reflected the cooperation between the two nations.

Chronicler's Note: Managers of the The Vault in Bezélan also claim this was to ensure equal spread of the cost of repairs and stone replacement. This is the source of some irritation as Qal'ath's half was uphill, meaning more needed replacing thanks to carts, careless horse-riders and when some slipped during heavy rainfall.   They also claim Shevezzi traders use more mechanical transportation devices, which have a tendency to uproot more stone than the simpler carts and wagons of the Qalathii ones. I cannot corroborate - or disprove - this theory.

While authorisation to enter the territory (with the entrances defined above) needed prior authorisation, there was no restriction on who could use it in between those two points 1. Thus any visitors to eastern Savàni would come to "walk the Freeway", purchase from merchants along the way and take in the view of the Grànousii-an-Ormàszil Ocean to west of the Lybweg.

Both realms encouraged tourists, to the degree that it didn't cause unnecessary pressure on the citizens there. The main sticking point with visiting was proving that you were neither Qalathian nor Shevezzi, for if you were, you would need the certificate already mentioned. Some nations, such as the Byantē Alliance had "Citizenship Documents" but other more minor people groups had no need for such scripts. Foyii visitors to Shevezz (for they were already allowed in Qal'ath) usually brought an Aszilmìs with them, as the use of such creatures (or familiars) was not an art taught or encouraged within Qal'ath's borders 2.

While Qal'ath's loose border control allowed almost every race through except the Shevezii, the same could not be said of the now-Queendom. This has led to a number of accidental trials and exclusions of the true minority groups and clans. Nearly all of these resulted in apologies and policy changes on the part of the Shevezii, who acknowledged that diversity enhanced the richness of knowledge and should therefore be encouraged.

The following groups were excluded permanently with little or no chance for any individual being or creature from their race-nations: 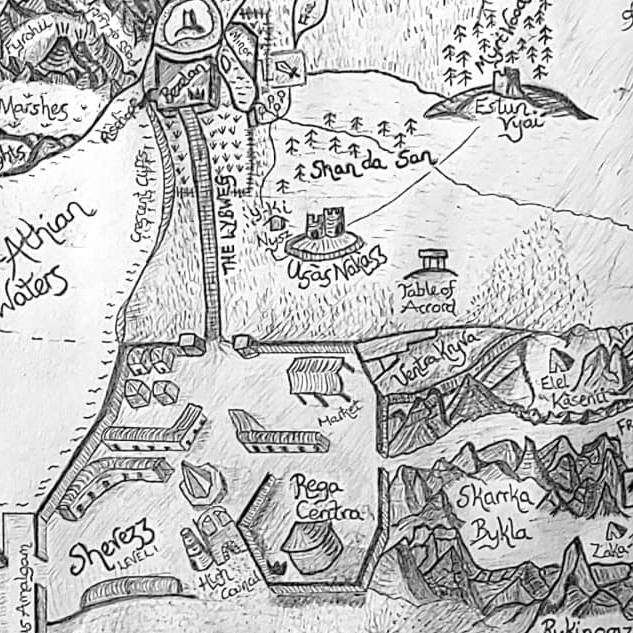 Answering: "A building associated with governance, leadership or change"
Visit FibroJedi's Competition Page Check all other answers to this prompt Competition Homepage