Game play note; These patrols serve as a pit stop where the players can rest, resupply, and gather information or missions. Optionally you can use it as a fast travel to the patrols destination port. With enough reputation
Every faction employs some form of patrol force to ensure the safety and stability of their territories.   A major port always has a formidable garrisoned sector fleet carrying out security actions in close proximity. Farther afield are the sectors supporting forces patrolling transit lanes between ports. Most often a port to port patrol takes the form of a task force designed for force power projection; to engage minor security & military threats. While also acting as mobile sensors reconnoitering regions between bases of power. Against serious foreign incursions or indigenous hazards task forces employ kiting tactics to distract while deferring to sector forces for any heavy lifting.   patrols must adapt to a verity of situations that may arise between ports. Each organization approaches this differently. Some prefer to have specialized ships while others prefer jacks or a jack of all trades. The dominions Albatrosses pattern is one such jack.   Common Denominators:   The Contender   This vessel may be the sole composition of a patrol for a smaller power. It is a scrappy ship with decent mobility that can dish out and take fire. It's job is to disable or more often to turn the foe into flaming greebles. It can also be used as an artillery platform in large task force ground actions.   Carrier   The work horse of the formation. While patrol carriers are design with decent mobility they are not interdiction capable and will lag behind in rapid deployment scenarios. Due to this they are reasonably armed and armored but not suited to sustaining ship to ship combat. The carrier has many tasks, fore most is the transportation of combat and utility assets; strike craft, armor, troops, if it can be transported the carrier will probably have it in tow. It's main role is to support the patrol's main combatant with strike craft and information from intelligence and reconnaissance craft. Secondary tasks include, actioning ground mission; Fielding troops, mobile armor, and coordinating close air support. Due to it's load capacity and troop transports the carrier may also action search & rescue or evacuation as a ferry to nearby ports.   Medical Support   larger powers that can afford multi-ship task forces support at least one unarmed or minimally armed medical ship. This is normally a private contractor and not a state managed vessel. These ships are mainly tasked with non-combat missions like after action clean up and aid.   The myriad of situations:   Patrols run by the larger factions have specialized members for any given situation while others pick and choose. Every patrol strives to at least respond to raiders and minor critter attacks. As a general rule of thumb for any size organization their patrols will not run escort as their main priority is to rapidly respond and deploy to emerging situations. Towing along squishy civilian vessels is counter to that imperative.   Anti-bandit tactics   Deescalation; Cease and desist is issued with a response grace period three times, followed by a show of willingness to use force. Interdiction; Surrender demand issued and bandits are interdicted. Domination; bandits are disabled or destroyed. Shock and awe; bandits are engaged at high speed, communications are scrambled, and bandits are disabled or destroyed. Annihilation/Overkill; Communications are scrambled and bandits are engaged with overwhelming lethal force on sight.   Faction Formation Prototypes:   Corporations:   Nihlus: (The all around "good guys")   Tactics: Deescalation > Interdiction > Domination   Patrols at a minimum travel in a task force with at least three action teams lead by one capital combatant. Each team consisting of at least 1 scout, 3 combatants, 1 carrier, and 1 medical.   Ceres: () Heloss: ()   Mercenary Bands:   Candela: (lawmen, mercenary paladins)   a pair of skirmisher class vessels supported by a trauma ship   Pardice Sky: ('luxury dealers'; pirates, smugglers, slavers, drug dealers)   Ship Patterns:
Prototype plans for an all terrain assault carrier (note: small blocks on strike craft are 6'~ person)
only interceptors, gunships, frigates support craft are capable of independent planet fall. 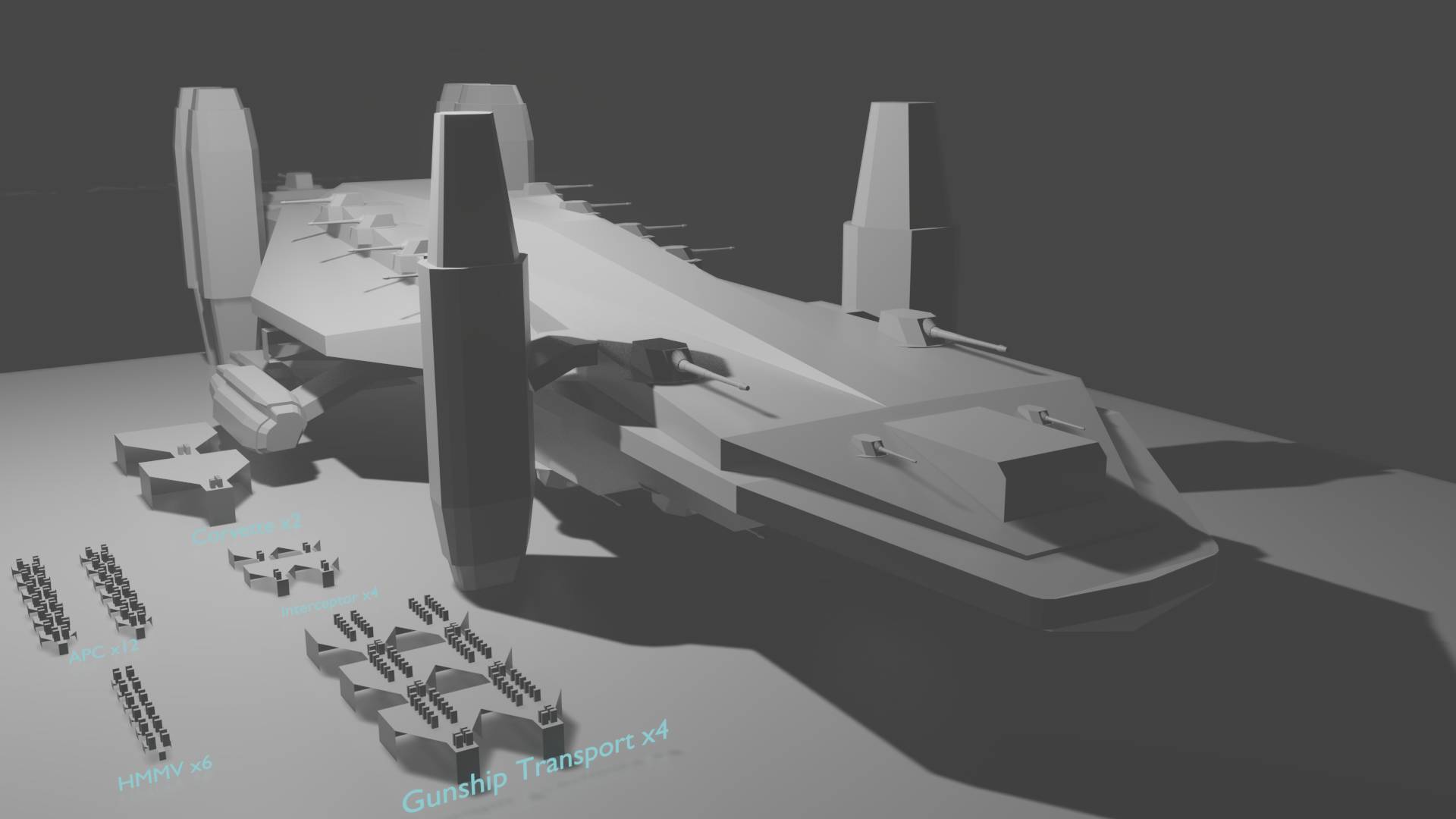 Design Details:   (thinking out loud)     Setting:   The world is covered by vast swaths of inhospitable territories infested with technological terrors and biological aberrations, bandits, violent weather and all manor of other hazards. Little to say the world is a very dangerous place. While this article talks about patrols in general, the focus of the current arc is on the world and satellites of Typhin II. The home world is ancient beyond imagining a Ecumenopolis many times over. Built, devastated, re-build, collapsed into barbarism, renewed and ruined.

About 27% of the world surface has been explored in detail or settled with the rest being obscured or currently unreachable. The land held by the current societies is paid for with blood. The machinations of the past are everywhere and in force. As are the troves of wealth they often guard. Typhin has no raw resources remaining on the planet. But the numerous technological and biological machines and organisms that populate the planet produce a plethora of materials. These can be found in ancient facilities across, below, and beyond the surface. Ancient zoos, marinas, farms, war forges, shipyard, parks, etc.

e.g. an ancient glass forge with creatures or machines that combined chemicals from the environment into silica granules. Over millennia they have birthed a vast desert and a unique ecosystem.     The enemy; key seekers, vile ones, demons. They hound the Typhian's every step always threatening to rend them into oblivion. This faction is the main reason for the slow push outwards from the cradle. The war of annihilation being fought across the planet since before anyone can remember.   How do things work?:   May focus is on making the setting and mechanics fun/playable rather than practicality that said I do like to try and have things make sense. I'm not a scientist but I'll try and technobabble my way through!   Who are we talking about?:   May factions I throw all new ideas at. the big five mega corps of the free nations (the none-dominion territories Nihlus (the home team "good guys utopian meritocracy, incentive, [Tall, tech tree maxed]"), Ceres (my "bad guy capitalists/colonial police state, the lash [wide, largest corp military]"), Heloss (tall, the alright guys ), Areia (the alpha legion double/triple deep fake out ambiguous guys, but actually good guys. maybe [wide, Max espionage]), The Dominion (the take your kingdom and brain wash you, "not so bad" guys [wide, largest army]), Aegis Meager ("the end justify" street roots red cross), Candela (the smaller home team, marry band of hard core grizzled mercenary paladins seeking to minimize the damage to global society by actioning as many swift campaign contracts with as little blood and as much humanity as possible. Manage wars horror from the inside! [tall, ultra elite units])   Difference between factions?:
Trying to prototype different societies that humanity could emulate to be "better" and generally vent my issues with the one I live in. Extra ideas:   Cerberus pattern; modules are extremely durable with multiple redundancies. (e.g. A-10 thunderbolt II)   Hydra pattern; modules designed to be rapidly detached for independent operation and rapidly merged.   Specter pattern; modules focus on concealment and low impact operation. (e.g. F-22 Raptor)