With two shades of blue representing the sky and sea, the Riselle Academy uniform is a byproduct of an age when magic was being studied and understood.   A popular theory at the time was that magic was a byproduct of nature and a product of the ancient elements: earth, air, fire, and water. Although this theory quickly fell out of favor, the nation of Tiveley had internalized this and attempted connecting with two of the elements: air and water.   The uniform's coloring reflects this, with the two shades of blue representing the sky and ocean.

The light blue of the uniform's jacket represents the sky, the element of air.

Each student at Riselle's has a patch on each of her school jackets. This patch records and advertises the areas of strong performance and accomplishments the student has made in her time in the school.

The white blouse beneath the light blue jacket peeks out, representing the clouds in the sky.

The long skirt or slacks crafted from a dark blue fabric represent the ocean and are the reminder of where Tiveley longs to go. The nation has a long history of attempting to conquer the sea, and this color is a nod toward or reminder of that dream.

Initially, a uniform was instituted at the school to help form a community and family among the students and staff. The additional benefits of the girls being separated from the general populace around them and the breaking down of barriers between girls from widely different backgrounds encouraged the uniform to continue even though the girls brought complaints with each new year.   As the school aged, more then the initial reason and benefit, the uniforms began to continue purely for tradition's sake. Complaints began to decrease as girls began to recognize the fruitlessness of fighting against uniforms, as they found ways around some of the harder requirements in their uniforms, and as they connected their pride in their school to pride in their uniforms as they were seen by the more general populace.

The uniform has been mostly consistent since the founding of the school, with only minor changes (e.g., the length of the skirt and styling of the jacket) to keep up with high class expectations of the time.   More than the overall look of the uniform, the patch and symbols it provides have changed more in that time. Early in the history of the school, there were more classes and achievements dealing with the sciences, all of which were removed around the time the Library of Guines was destroyed.   Additionaly a deeper understanding of magic and the evolution of the classes around that over time brought additional embellishments to students' patches. 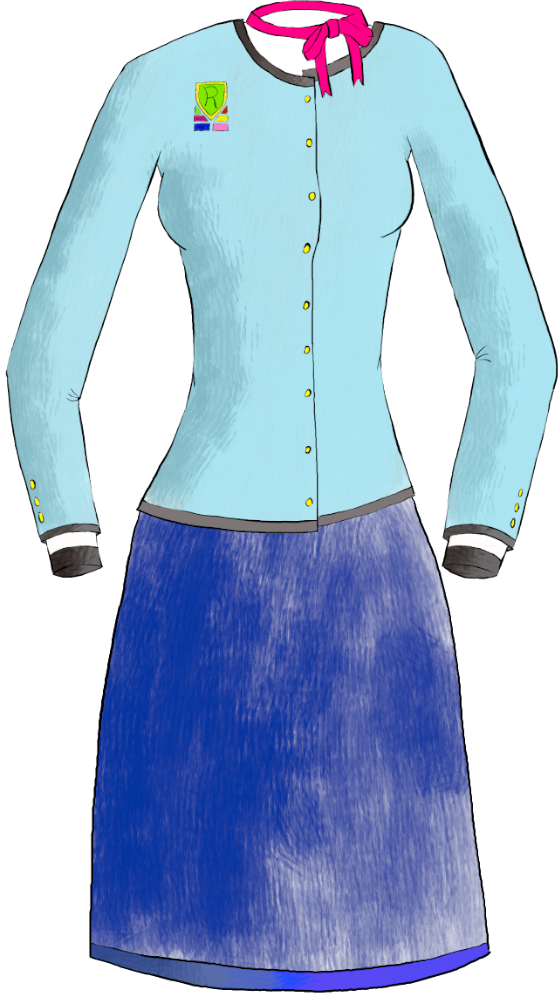 Nice article. I like that the colors were chosen for a specific reason and have some symbolic value. The image you added is also pretty nice :) The patches and how it changed during the uniform's history is pretty interesting as well.

Nice article! I like the symbolism about the colours :D Do you have examples of complaints the girls have about the uniform and of the the way they have managed to get around them?   I like the idea of the patches. Do you also maybe have example of what different patches would look like and their meaning?