The blinding, stationary center of Ultra Megalopolis, and the source of the only light in the city - Megalo Tower is more than a city center.
Megalo tower serves are the eternal prison of Ramiel - commonly known as Necrozma.

Megalo tower serves two central purposes: to contain Ramiel from the rest of the world, and to give light to the eternally dark city of Ultra Megalopolis.
When the tower was created eons ago, it was created with a divine seal to prevent entrance or escape - the only viable means of getting in or out are wormholes, which the sole prisoner cannot create. Ramiel's rampage could have only been put to a halt by sealing them for eternity.
As Ramiel had stolen all light from Ultra Megalopolis, the stolen light is sealed with them inside the tower. The location and architecture of the tower, as well as the prism-like skyscrapers surrounding it help bounce the light around Ultra Megalopolis, to prevent it from being entirely pitch-black.

Any alterations made are entirely interior - while it's referred to as Ramiel's eternal prison, it's essentially the divine equivalent of them being grounded and locked in their room for all of time. As such, the interior is quite comfy, and has changed repeatedly over the years due to Ramiel's shifting tastes in decor.
Ramiel's tastes tend to be very 'grunge'-esque, and while the tower might be Megalopolis's source of light, the interior design is almost all black.

The building appears as simply a pillar of light, but upon closer inspection, it's actually made up of hundreds of prisms that seem to move away from the tower to reflect light better at random. The actual composition of these prisms is unknown, because it wasn't built - it was simply created. Scientists have been unable to test or break bits off of the tower to test what it's made of - though most assume it's made of stardust, as the tower was created by a divine.

Eons ago, the child of Arceus and the goddess of Ultra Space became frustrated by their parent's lack of attention. Named Ramiel, they wanted to be powerful and control something big like their parents. While the Skymother, goddess of Ultra Space would dote over them and give them anything they wanted, Ramiel craved the approval and attention of Arceus, who was mostly despondent and would ignore Ramiel.
They hopes of being noticed turned into rage, and Ramiel would take out their anger on Ultra Space. They were unstoppable - the denizens of Ultra Space were helpless to Ramiel's power, and they would absorb more light from the world and become more powerful as a result. The Skymother couldn't reach through to Ramiel no matter what she tried, and Arceus refused to intervene. As a last ditch effort, Skymother used all her power and sacrificed herself to seal Ramiel for eternity, in order to save Ultra Space from being completely destroyed.
Skymother created Megalo Tower, in order to keep Ramiel contained. And since then, Ramiel has remained in the tower.


As the tower has been there for as long as any living person can remember, residents of Ultra Megaopolis treat it as just a normal part of their life, not paying it much mind. The general populace isn't even entirely convinced Ramiel exists at times, and just see the tower as where light naturally comes from. There's a small group of conspiracy theorists who fear the tower, and preach how the tower is dangerous, and that Ramiel will break free one day - but nobody really takes these people seriously. 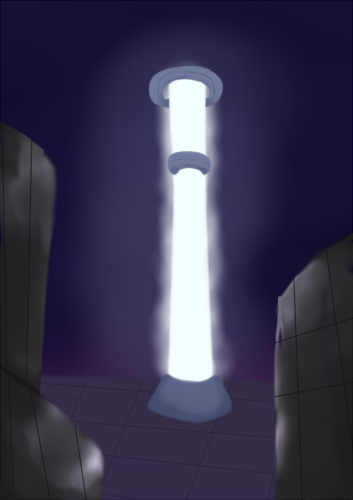