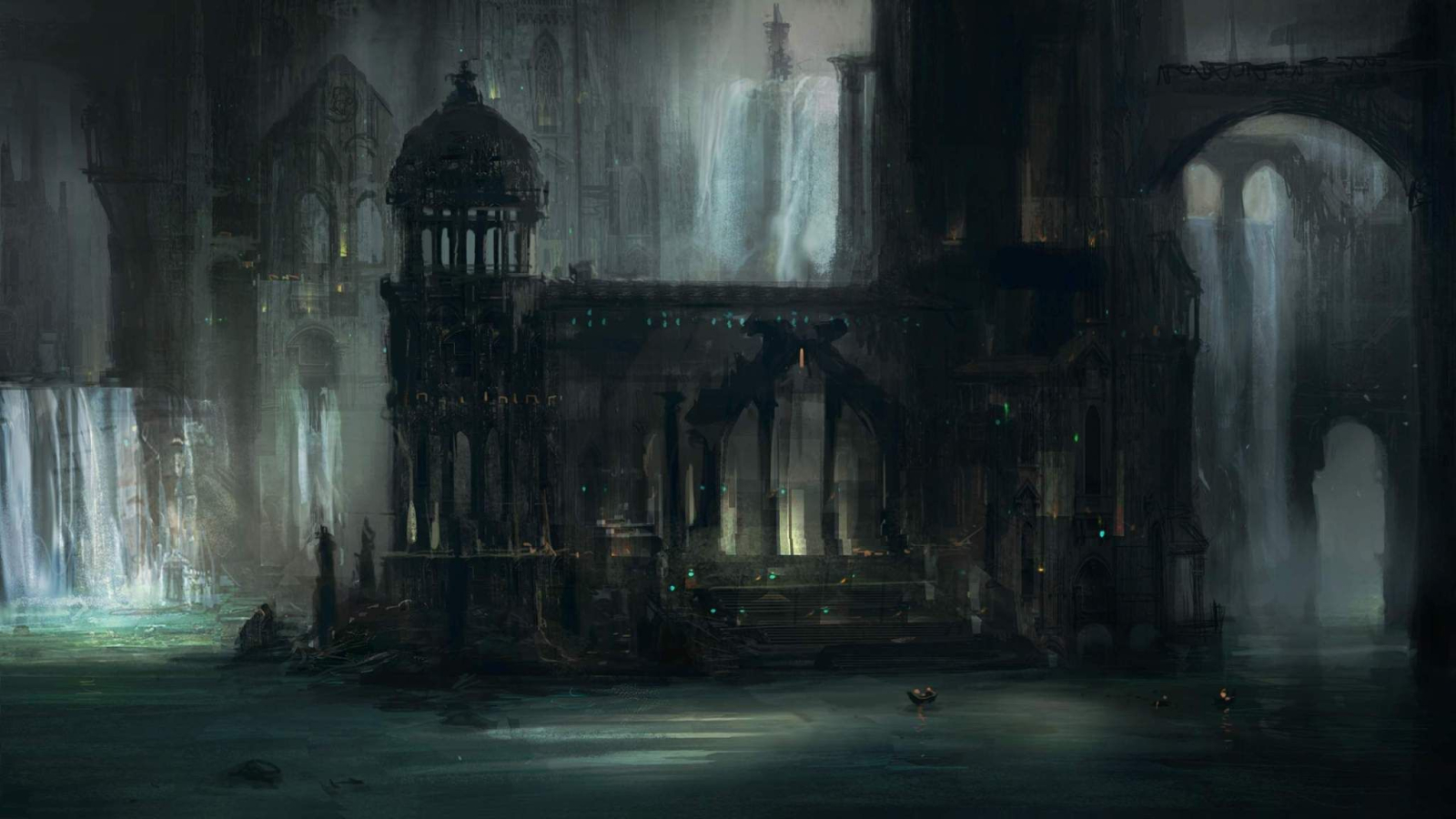 The Long Dark: A World Overview

The fact that this is a toroid planet has numerous implications. The most important one is that it results in strongly banded climate zones, and weather tends to extremes. Temperatures, winds and even gravity can vary starkly between areas only a few tens of miles apart.
Life here has had to adapt to these extreme circumstances, and it shows in the vast variety of species within the different regions. But it is life nonetheless, even in this dark and dangerous world. And among all that the sounds of civilization can be heard, localized in the divine cities. The mapped major geographical regions are as follows:

Bonelands by Yefumm
A desert of ironsand dunes and salt flats, calling this region barren would be an understatement. Only a few plants have been able to survive in these conditions, and even most of the wild-life has had to make remarkable adaptations to survive, such as evolving to oxidize and consume iron. The two divinities that have risen to power here were able to do so by providing tools to overcome the lack of food. Vératya cut off his own flesh to create an ever-regenerating beast to be butchered, while Viharanya taught her people the art of necromancy so that their labor force far exceeds what their food supplies would be able to sustain. 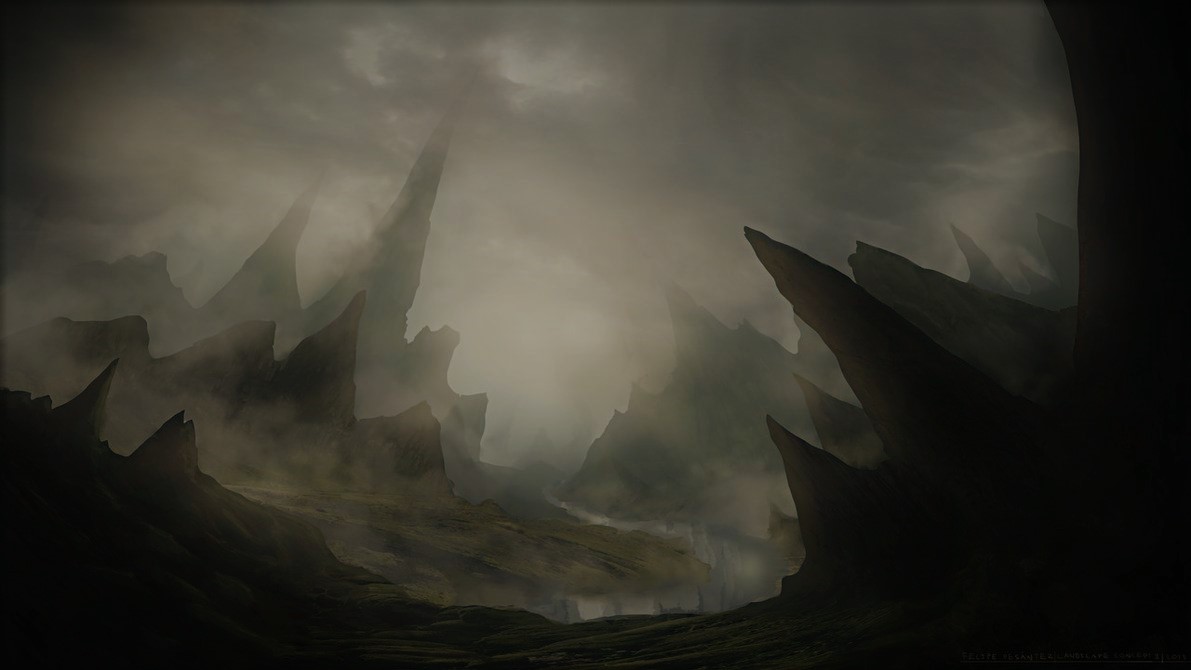 Highlands by Sjruk
A volcanic highland region dotted by innumerable hills, mountains, cinder cones and other geological formations. It is basically a volcanic belt of mountains ranging from 1500 to nearly 4500 meters high that draws in powerful elemental creatures. It is an incredibly difficult region to traverse which has allowed for many small, insular communities rather than the usual situation where the stronger cities/divinities consume the smaller ones. About five major divinities have risen to power here, but now they are growing too large to share the region. Conflict is imminent, a battle that will be fought amongst treacherous mountain passes and clouds of ash and smoke. 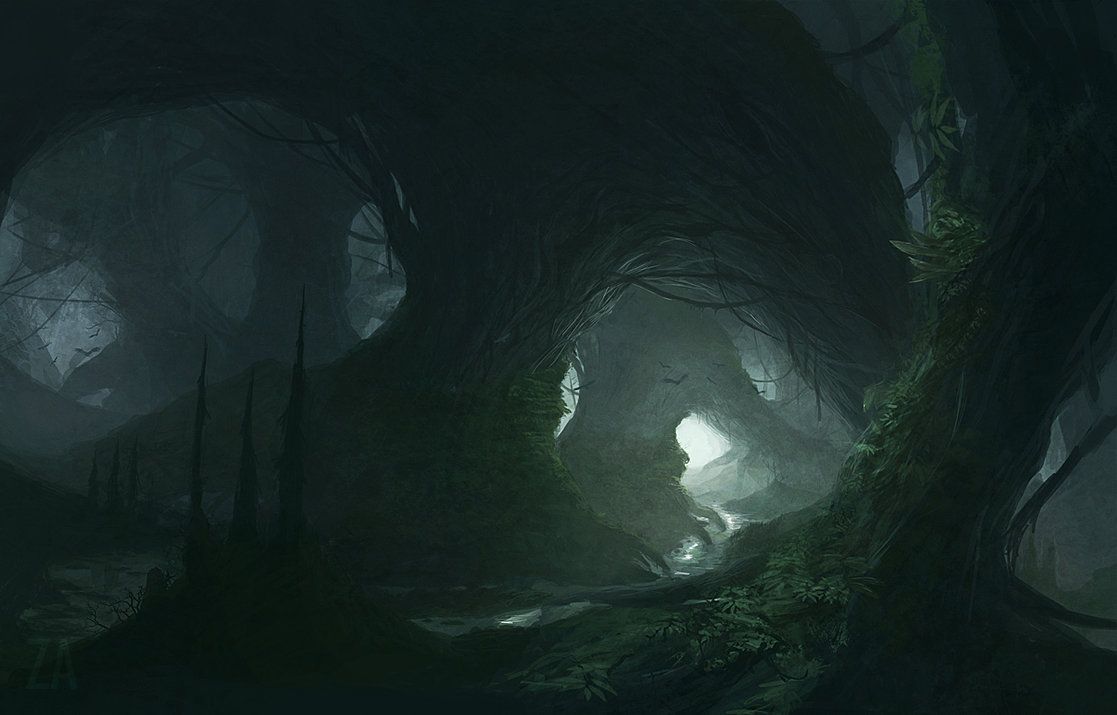 Black Swamp by Patrykc
Below the Eltórián Bonelands precipitation increases, and vegetation starts to pop up. In the region of Vörövisz (lit. 'Redwater') the plains turn to grassland to swampy forests. The region's name originates from the red Nyr Algae that are prevalent in these waters, algae that release a paralytic nerve poison so they can puncture any animal that falls in the water and drain it of nutrients. This is just one example of the hostile plant-life found here. Worse are the sentient plants of the Nyr Woods animated by an ancient and powerful force that preys on the living.
At this point only Ildovad remains as a major divinity within these forests, having conquered and consumed numerous other divinities.
On the coasts Tenvíz and his people fend off fish creatures that animate the land into living mounds they worship as pagan spirits. 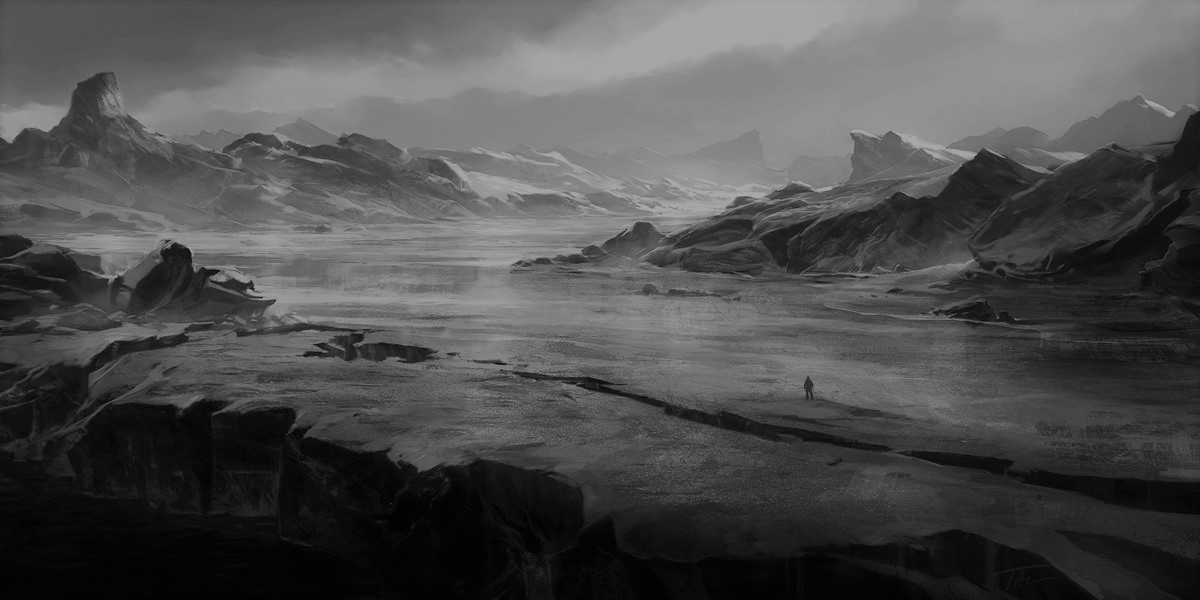 Frozen Wastes by Unknown
To the far south, at the rimside of the planet, the weather is colder and the land turns into cold taiga and icy wastes surrounded by icy seas. But there is more, the Downside is a gigantic subterranean cavern system with interconnected caverns and tunnels that stretches many kilometers. The passages and caverns can be several hundred meters in height, large enough to form its own weather system. This is where many people retreated to after the Chaos Wars devastated the Topside, preferring even the food scarcity and dangerous predators of this dark underground over the mutating radiation and mutants of the surface wastes. It is a dangerous region with a stark dichotomy. The two areas show great diversity, with pine forests full of life above, and mushroom caverns with mostly insects below. Only one major divinity was able to sufficiently protect himself and his people of the Chaos Wars' explosion on Topside, but the exodus to the Downside elevated two divinities there to greater status. Hávadall welcomed the newcomers and taught the most able of them the secrets of lycanthropy, as well as how to persist of the hunt. The Wolf-Kin fight for their lives everyday, and they make use of every piece of their prey. Meanwhile Kélet has taught people about the transformative processes of life and death, which has afforded them better medical knowledge and more efficient ways of brewing drink or farming mushrooms. They live a hard life, but one that gets better with each new discovery.

Remove these ads. Join the Worldbuilders Guild
Leave the Light: An Introduction
Preamble for the Lost
Suffering Besides: About Everyday Life