South of the Eltórián Bonelands the land becomes less dry and more vegetation starts to pop up. Due to natural conditions on the planet plant-life lacks chlorophyll and appears in pale and fleshy colors, and is mostly saprophytic or parasitic. Once you cross the canyons leading south you end up in grassy plains that soon transitions into swampy forests until you eventually reach the coast in the southeast (and in the west it stretches down far further and you enter a different area before reaching the coast). In the far west the land becomes drier again, and the region is bordered by a mountain range in the northwest. The region is also known as Redwater after the unique red algae found here. 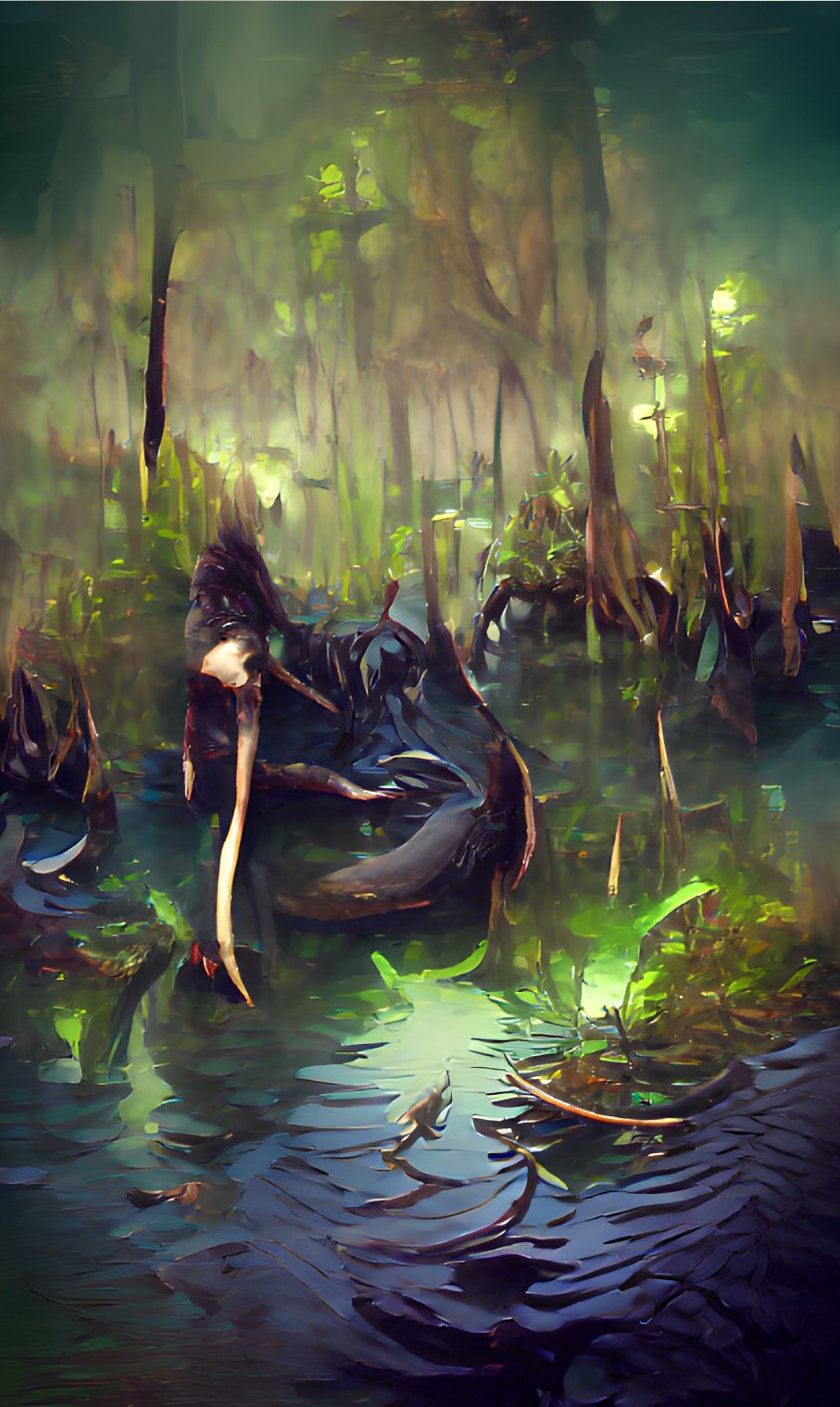 Not all is well though, for these lands hide many predators among its trees and waters. The northern plains next to the Bonelands are home to roving packs of pale, man-eating "spiders" that possess vaguely and disturbingly humanoid features. The swampy waters are colored blood-red, as they are filled with Nyr Algae that can release a potent nerve poison that it uses to paralyze prey before poking holes in them and draining their nutrients. The forests themselves seem almost alive as well, for they are home to trees sticky with mucus that allows it to catch prey, while others are truly alive as plant creatures are quite common here. Worse even, many of the soldiers that die here appear to be reanimated by the same malevolent force that commands the blighted plants. Not even the coast is entirely safe as it is besieged by what would seem to be fish-people that worship pieces of the land come to life in piles of dirt and branches. Many a tribe has met extinction here, and if they did not they were often conquered by the others instead.   But there's worse things here. Tales of fey that stalk the forests, tricking people or bringing them into their twisted games. These tales may be used by parents to scare children into staying inside, but that does not mean that there's no truth to them. Monsters may simply run you down and try to eat you, but with fey you can never be certain what they want, or what they are capable of doing to you. They may be bound by their own rules, but they know those better than anyone, including how to twist them to their advantage.

Fanyálka. Flesh-eating trees that secrete a sticky mucus to immobilize their prey. They puncture the skin of their prey with adventitious roots that allow them to drain nutrients from the corpse before fungi and insect decomposers can do so.
Harmégis. A herb whose oil can be processed into a potent cognition-enhancing drug.
Nyr Algae. Blood-red algae that can release a potent neurotoxin to paralyze their prey, before puncturing their flesh and draining their nutrients through their blood.
Psitékos. An extremely rare type of fern that grows only submerged in water or partially above the surface, dwelling in boggy areas or along waterways. It is extremely prized due to its roots, which are both valuable and dangerous as they can temporarily send a person who consumes them into a hyper-psionic state where they gain innate control of psychokinetics and other psychic magic. It is not easy to harvest however, as it infests local wild-life through psychic suggestion, turning them into its personal guardians that will protect it at all costs. Beasts of different species that would normally be enemies will work together in perfect formation, forming unusual but lethal pairings.

Many divinities and the tribes that worshiped them have died out, but those who have managed to survive the dangers of these lands can make a decent living here in these wetlands. The two major cities in the region are as follows:

Possibly the most powerful divinity in the world, the Conqueress Ildovad has consumed several minor divinities and absorbed their essence. She has massively expanded her territory, but this has had the downside of spreading her follower's impressive army quite thin. These soldiers, also known as the Sentinels, spend most of their time just pushing back the plant creatures that infest these swamplands to clear the trade routes and protect their outposts. Recent border skirmishes with Viharanyavár have added even more pressure on them. Despite that, their military is both one of the largest and most well-trained.

The City of Mists is a town located on the eastern coast of Vörövisz that is protected by the divine mists of the Trickery divinity Tenvíz. This city is home to many fishermen and they trade their fish with Ildovár and smaller towns. It is a free city where gambling, wit and upwards mobility are emphasized.

Smaller divinities tend to either be consumed by the larger ones, or their hallows are overrun by creatures of all kinds and they are never discovered. Many of the minor divinities here have been conquered by Ildovad, while others were destroyed by the fish-men or fey. The notable minor Points of Radiance (and their related divinities) in the region are as follows.

The region is full of swamps and wetlands, but more than that it is full of danger. A variety of beasts and creatures stalk the lands, and some have shaped the world around them in a significant way. Examples of such locations include:

To the south of Tenvár lies a large tied island connected to the land via a thin strip of sand that most people would do well to avoid. The fish people so feared through the region have made their base here and ensured that no civilized people could ever claim this place. Tales say that here they worship a living mound that is similar in appearance to the others they raise, except it is gargantuan in size and they appear to worship it as their god. People have claimed to have seen this thing from a distance, but no one has ever been able to get near without being caught by the fish men or the awakened plants that stalk the island.

To the northeast of Ildovár, just outside the territory of Ildovad, the forests are far denser. And between the trees are innumerable small fens and bogs that seem to be just filled with the red-colored Nyr Algae. Even worse, they are filled with plant creatures and even living trees that seem to prey on the living. It is as if the entire forest is one large predatory organism seeking out the blood of the living. There are stories of a giant, black-wooden tree at the center of this all, with vines and branches stretching far and wide to grasp any living creature that enters its domain, so that it may feed itself. No one has been able to confirm its existence, but those who went too deep in these woods haven't returned either, so who's to say whether it's true?

This may be one of the most horrific sights in all the region, which is saying a lot. The northern plains of Vörövisz that border on the Eltórián Bonelands are home to pale, man-eating spiders called Embéri. However, these creatures do not just eat their prey on the spot. They use a kind of nerve poison to paralyze their target, which they then drag back to this structure. Here they spin a cocoon around them and add them to the whole, where they are either slowly eaten, or eggs are laid into them and they function as a food source for the younglings.   But the horror doesn't stop there, the structure itself is outright horrifying to look at. The silk structure is enormous, and a hundred spiders or more crawl over it at any given moment, and it resembles a face. A vaguely humanoid face that is, with an anguished expression and supported by multiple smaller spires that seem to resemble spider legs. All in all it seems like a misshapen or deformed version of the embéri spiders themselves, who have some vaguely humanoid traits themselves in their appearance. 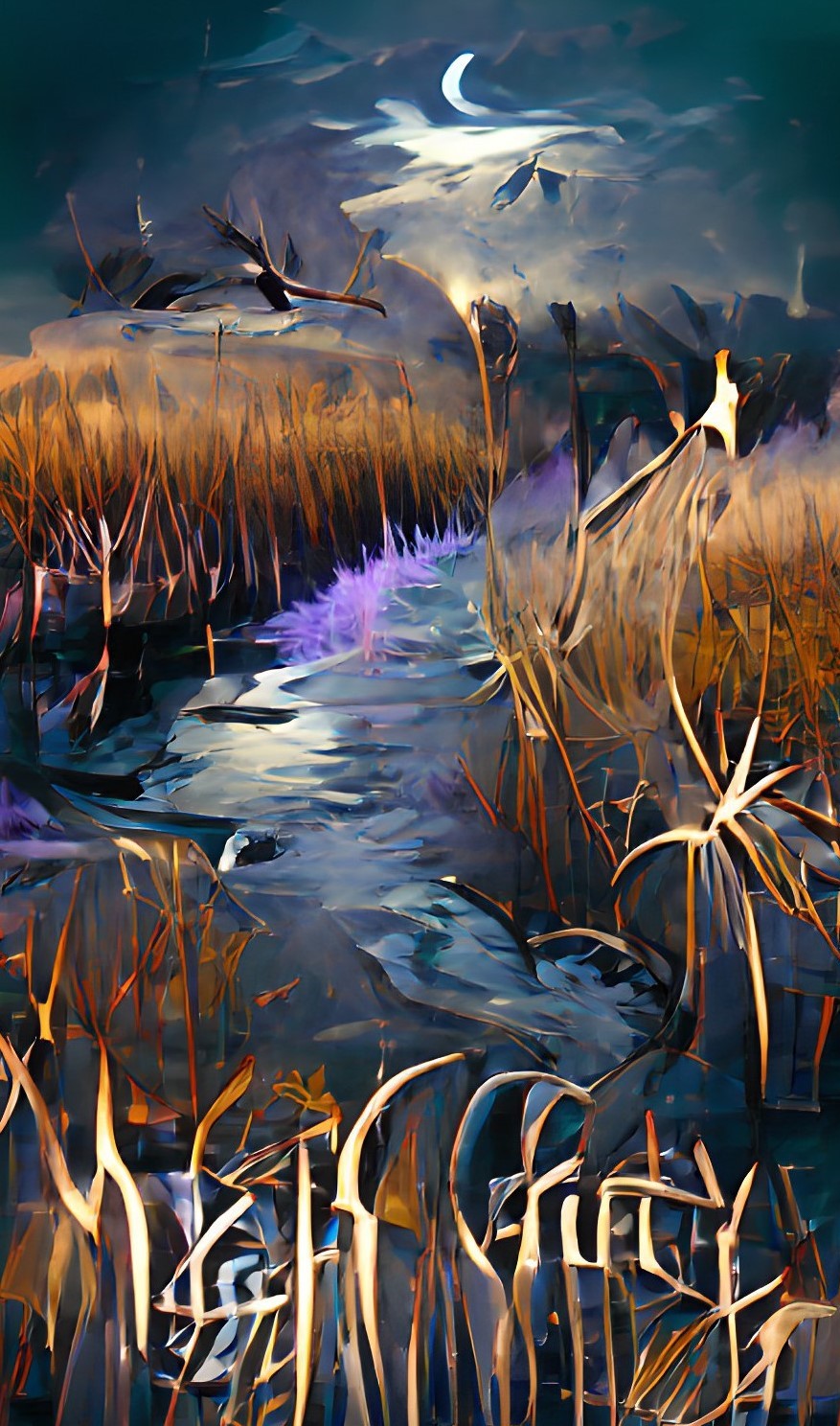 Halfway along the river Ild that leads from the lake surrounding Ildovár to the eastern coast, lies a swampy region that is inundated with water from the Ild and the river Tenger that flows somewhat parallel to it. This area is unfortunately home to a particular species of basilisk. These large, eight-legged reptiles are capable of petrifying any living matter for their own consumption, as their elemental nature allows them to derive sustenance from rock which their unique gastric acid digests into suitable components.   Nearby wildlife often falls victim to their gaze and half-eaten statues can be found aplenty, but their influence is felt by the flora as well, with many of the reeds having been turned to stone by starving basilisks that were unsuccessful in their hunts. The stone reeds as they are called have earned this place the name of the Stone Marshes. Occasionally a trading vessel may strand here during a storm, which is a feast for the basilisks, but a horror for the people who cannot defend themselves against such a horde of petrifying gazes.

The giant Craag was a titan born from the earth. He walked out of the Tukhamu Magas into Vörövisz where he acted as a tyrant to some of the native creatures until he met his demise at the hands of Ildovad, the Conqueress. Like the other few of his kind he rapidly petrified upon his death, except for a small area surrounding the mortal wound in his chest where Ildovad had impaled him with her spear. Now his blood spills eternally from the gaping hole in his chest, welling forth by some divine magic. It streams down along his body like a river down a mountain, and it pools at his feet in a lake of blood that seems to never coagulate. It smells like rot and death, and no natural creatures can survive in it. But even from this deathly mere some magical beasts spill forth, birthed by the malevolent ancient force that resides in the titan's corpse.
Neighboring Regions.
Eltórián Bonelands.
Tukhamu Magas.
Jégoria.
Alternative Name(s)
Redwater, The Land Alive
Included Organizations
Inhabiting Species