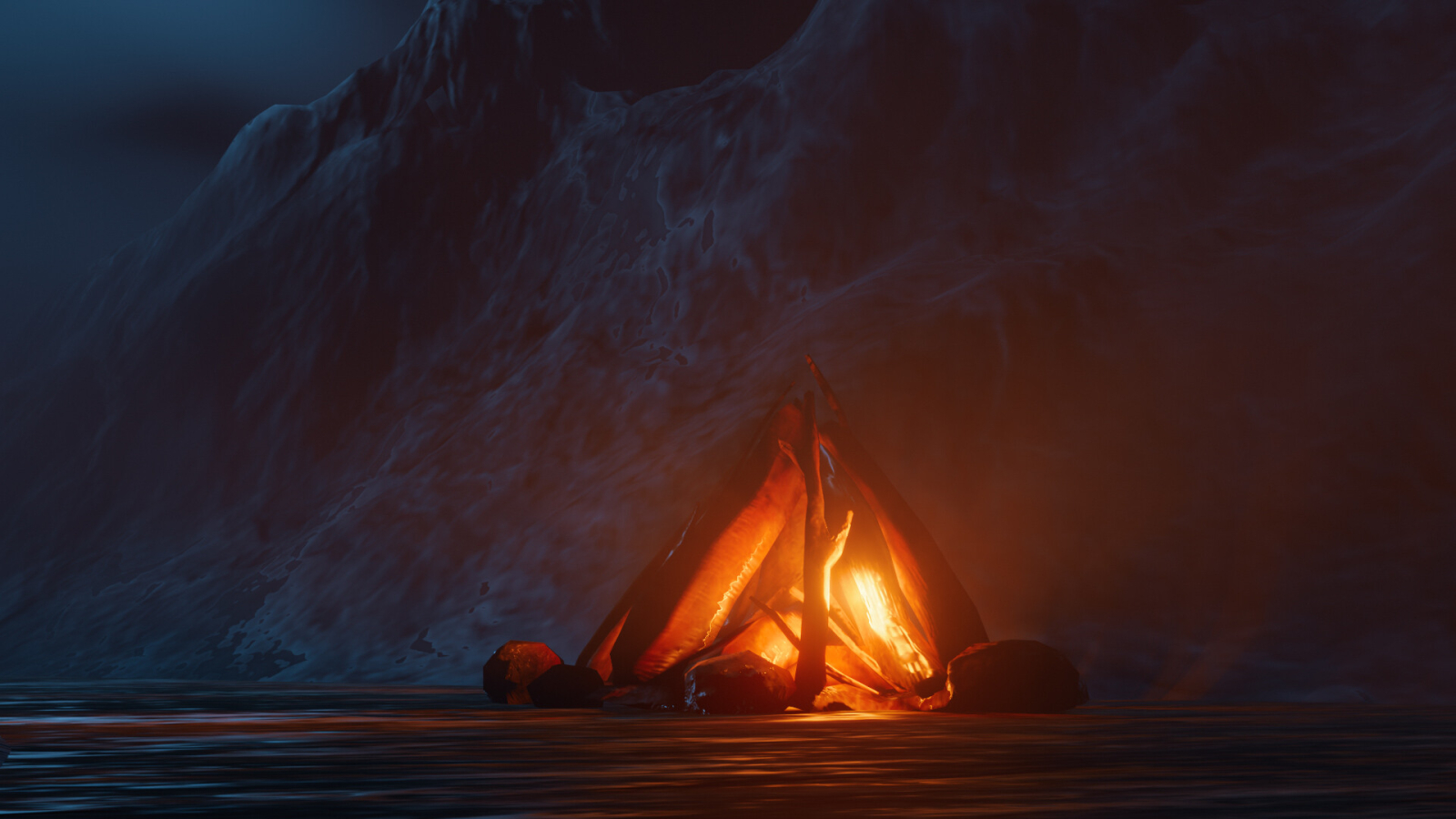 When a group of people fled the fey that were hunting them through the forests, they decided in their desperation to swim across a lake to the island in the center of it. Here they found the hallow of Ildovad who saw these ragged people, pushed to desperation and littered with scars both physical and mental. But she also saw the potential in them, and she gave them the strength to fight back against the forests creatures.   Nowadays her territory has expanded massively, as her loyal soldiers have conquered several of the nearby villages which allowed her to absorb the essence of the minor divinities that ruled them. But her followers are spread thin, and her territory has been forced in a rather strange six-pointed star shape to encompass the villages. This has stretched her power and she would need to feed on a significant energy source (e.g. another major divinity) to expand more. The conquered villages have also been turned into merely small military outposts that require little maintenance as the difficult swamp terrain makes it simply not worth investing any more in them.   Her forces are spread somewhat thin however just defending against the plant creatures that live in these forests and keep invading the routes between the Ildovári outposts. There are constant patrols around the mid-western area of the swamps, where they cut away at the enemy forces and try to clear paths that allow for travel and trade.

The vast majority of the population is centered around the city of Ildovár itself, which is in turn built around the hallow of Ildovad. Around the central island people have piled up closely spaced wooden platforms, with a layer of mud bricks on top to create a stable foundation for construction. The wooden piles do not decay as rapidly when they are submerged in water with little oxygen. This has allowed for expansion throughout a good deal of the lake surrounding her hallow.

Swamp Town by Henrik Ågren
Several of the nearby lakes have been partially drained to allow for rice farming, and smaller structures have been built around them to keep them safe from raids.

The political system within the city is sadly sorely underdeveloped. In the end, martial capability is what is generally pursued, and the city is ruled by a military council. But they are all military minds, and they do not necessarily fully grasp the gravity of other subjects. This becomes particularly obvious when it comes to trade and income classes. The terrain here makes it difficult to make a living, the ones who benefit most are the merchants who trade different goods between places (particularly the harmégis trade is profitable). But this rich merchant caste currently operates outside of the system, and they are not being properly limited by the council through taxation or market share limits.

Farming is traditionally limited to rice in the partially drained parts of the swamp as mentioned earlier. In the far western parts of her territory the land is also drier, and here they can do some basic farming but these lands are less well-guarded than the city of Ildovár and its surrounding areas. Fishing is also very common in these wetlands, and occasionally river traders will bring in fish from the eastern coastal settlements as well.   Two major sources of trade for Ildovár are iron and a herb called harmégis.   The rivers that flow into these swamps can carry a lot of iron flakes with them, and so the ildovári frequently go digging to collect this iron. This also means they are decently well-armed for the current times, with many other places still using bronze arms instead.   Harmégis is a herb that is only found here locally, and it is not necessarily a plant that stands out. But the oil that can be obtained from it is a potent cognition enhancing drug that is frequently used by warriors as well as for recreational use as it puts people in a hyper-focused trance. It is also the source of a good deal of trade in this area, and those who deal in it have grown exorbitantly rich, but this also leads to occasional conflict.

Due to the large focus on martial skill, magical skill is not as highly prioritized within ildovári culture despite being recognized for its usefulness. The reputation of arcane magic has also suffered due to a past conflict with a minor divinity of Trickery whose mages used their abilities to trick ildovári soldiers with deadly consequences. To the ildovári this was a craven way of waging war, and arcane magic has gotten a reputation as a coward's tool. Those who practice arcane magic are often discriminated against. Divine magic is not criticized as such, because it comes directly from their divinity which makes it holy and above such criticism.

The city is close to a theocratic stratocracy as it is headed by the military leaders, who fall under direct command of Ildovad herself of course. Beyond that there is surprisingly little central organization for trade and otherwise. Thus people have taken it unto themselves to organize, often with criminal elements.

The Sentinels are the main military force of Ildovár, and also the largest component of the church of Ildovad. They handle almost all of the day-to-day business in her territory. They patrol the routes between outposts and the city, they stand guard to prevent invasion from woodland creatures, and they also go out to subjugate monsters when necessary.
Additionally they function as the policing force within the city, and they handle the bi-yearly taxation used to maintain the standing forces. They also control a lot of the iron obtained here, and thus own a decent amount of the specialized farming equipment that they lend out to the local farmers in exchange for food to sustain the army. They are lead by the Iron Fingers, five of the greatest generals within the city who form the military council that rules Ildovad's territory in her stead.

The Marshclaw Group is an association of traders with a dark underbelly that specializes in the trade of harmégis. They are trying to achieve a large enough market share of the harvesting and distribution of the drug so that they can drive up the price. Their thugs have been trying to strong-arm other traders and harvesters to give up their business to the Marshclaws or ... nastier things may happen. They are even trying to spread their influence to the Sentinels, where many warriors have an addiction to the drug due to the battle trance it grants them.

The Root Rotters, or simply the Rotters, are a major gang within the area. They initially made a name for themselves by taking out the individual plant creatures that were often left behind after battles with the Sentinels, or which were weakened for some other reason. They sold the magical components for a profit, and in some cases even took contracts to hunt down specific creatures.
In recent times they have been trying to get into the harmégis trade, which has put them into conflict with the Marshclaw Group. The majority of their members are proficient fighters who were rejected from the Sentinels for behavioral issues or a lack of faith. They are led by a trio of sisters whose vicious temperament is only matched by their skill in battle.

Sharpen the Body and Mind.

Remove these ads. Join the Worldbuilders Guild
Swamps of Vörövisz