The Eltórián Bonelands, also called the Eltóriások or simply the Bonelands, is a region of large dry, basalt plains and arid ironsand deserts that is characterized by the bones littered around. The unusual thing about these bones is that they are enormous, reaching up to 30-50 meters in height. Nothing quite so large roams this area so the question is then, how did these end up here?

What Slithers and Stalks

The place is animal territory, despite its lack of vegetation and harsh winds and extreme temperatures. What little vegetation there is consists mostly of shrubs and cacti, and farming is nigh-impossible here. Creatures have adapted to these circumstances, some having evolved to store their water in unique ways, while many others have become carnivorous predators so they can obtain their water from their prey. The roaming packs of creatures such as bonehounds and the demonic beasts that stalk the land make this area quite dangerous to traverse. Reptiles are particularly common here. They use external heat and cold to control their temperature and they breathe at a slower rate, allowing them to conserve energy and thus requiring less food and moisture.   There are even tales of sentient scorpion-people that catch any stray travelers and sacrifice them to their queen, or myths of a type of tall, red-skinned vaguely humanoid creatures who supposedly call on the winds to propel their boats that glide on the sand.   Who knows what danger truly lurks among the sands, and which are mere fancy?

Bonehounds, bonepeckers, ratel, demons (e.g. tatzelwürms), landsharks, salt shrimps, hangyárova, scorpions, nagaraja, eltórián monitor, rust hawks, fortune geckos.   Brief Descriptions.
Bonehounds. Hyena-like canines with a protective bone mask and powerful jaws.
Bonepeckers. Birds that have developed a protective bone mask to eat acid-spraying beetles.
Tatzelwürms. Demonic creatures that corrupt the nearby land into quicksand through which they burrow to ambush their prey.
Landsharks. A subterranean, shark-like creature covered in thick layered plates.
Salt Shrimps. Land-based crustaceans that sustain themselves on salt and possess a powerful vice-grip.
Hangyárova. Giant insectoid species that have physically different classes and show a high level of cooperation.
Nagaraja. A medium-sized, reptilian predator reminiscent of a cobra/cat hybrid.
Eltórián Monitor. A large reptilian with an excess of mirror neurons which allow it to deduce intent from minimal body language.
Rust Hawks. A bird species that possesses an enzyme that allows it to oxidate and consume metal, which it uses as grit or secretes to cover its beak and talons.
Fortune Geckos. A small lizard said to bring great fortune to those who help it.

Azatyavére. Known as the blood of the father, this is an unnatural type of cactus created by Vératya for his people as a source of water. Unlike other cacti the sap is not as acidic and thus safe to drink.
Robbacédras. A type of salt ceddar or tamarix tree that can grow incredibly tall, up to 15 meters in height, and forms dense thickets. It is appreciated for the shelter it can provide, but not during seeding season. Because its seed pods happen to be explosive which allows it to spread over a large area, but it also forms a beautiful yet dangerous display of colorful clouds. Sometimes people try to stay just out of range of the shrapnel, but close enough to experience the spectacle because the seed clouds are psychoactive.
Minszürke. A type of gray desert shrubbery that is found all over the region. It has incredibly deep roots that connect deep down into a large hyphal network, forming an enormous regional gestalt plant. It is said that touching it can sometimes restore lost memories.

There are several smaller or even undiscovered divinities, but the two whose influence has grown, grew because they were able to offer the people a particular way to survive in this harsh region, which attracted more people.

The divinity Vératya sacrificed his own flesh, turning it into a large miraculous beast and chaining it down so that the people could butcher it endlessly. This has given them a source of readily available food, and it is the reason why the city of Vératyavár is the largest in the region by far. He has not conquered much however, and there are few smaller villages under his rule, so nearly the entire population is concentrated in the sprawling Blood-City.

A city built on a foundation of undead laborers where wealth means (man)power. Its living population does not measure up to that of Vératyavár, but its undead forces provide labor and safety for the living. Viharanya has conquered several smaller divinities within the region, and her territory has expanded to cover some of these smaller towns or tribes, which are now either deserted or ruled by the Viharanyavári burghers and their undead forces. The three small towns currently still under her control are Csóntar, Homszég and Szélan. Still, the lands between them are dangerous and scarcely patrolled, and any trade caravan has to be accompanied by a significant force.

Smaller divinities tend to either be consumed by the larger ones, or their hallows are overrun with beasts and they are never discovered. Compared to other regions, there is less interaction between Points here due to the harsh conditions. The notable minor Points of Radiance (and their related divinities) in the region are as follows.

The majority of the region consists of dry plains and sandy dunes, but there are plenty of interesting and unique features that can be found here. These can be unique natural features, or nests of terrifying monsters that have shaped the land. Some examples include:

This canyon is one of several that leads to the southern marshlands, and it does seem more full of life with vines crossing from one side to the other. Except many of these vines are not really vines but tendrils of the hungry predators that lurk here. While people do not really know what these things are, by now they have learned to avoid crossing through here except in the most dire of circumstances. 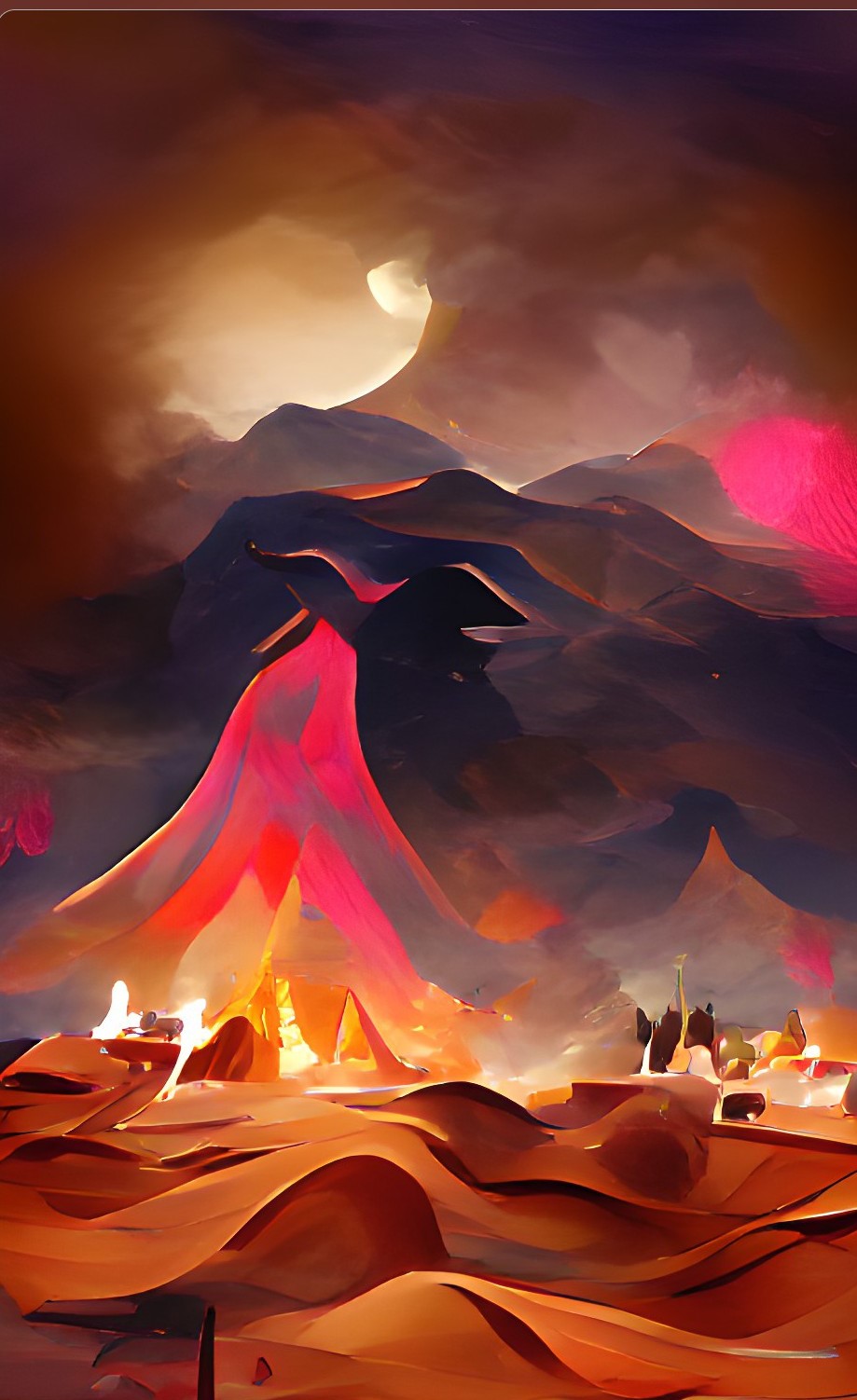 To the east lies a dormant volcano that occasionally seems to stir, but never truly erupts. People have traditionally always avoided it for there were tales of a powerful demon residing within it. There have been disappearance cases of people who have traveled near the mountain. On one occasion part of a scouting party came back, but the ones that returned were wounded and borderline delirious. They spoke of men with skin molten like candle wax stalking around the vicinity of the volcano, chasing them with weapons gleaming of blood and fire. Few have ever willingly gone there to confirm the tales.

In the northern part, a little west of the Sokeres salt flats lies a small grouping of oases that are distinguished by their unique color. The high levels of evaporation have left behind a natural deposit of natron in the bedrock surrounding these three oases, turning them highly alkaline and as a result, pink. While most animals avoid the oases as the waters are dangerous to consume for them, the bonehounds are not too bothered as their bonemask and scaly skin protects them from burns, and they possess a gland near their head that allows them to filter the salt from the water. Similarly the bonepeckers also thrive here. It is a surprisingly lively place, but also one safe from some of the boneland's more dangerous predators like the landshark. 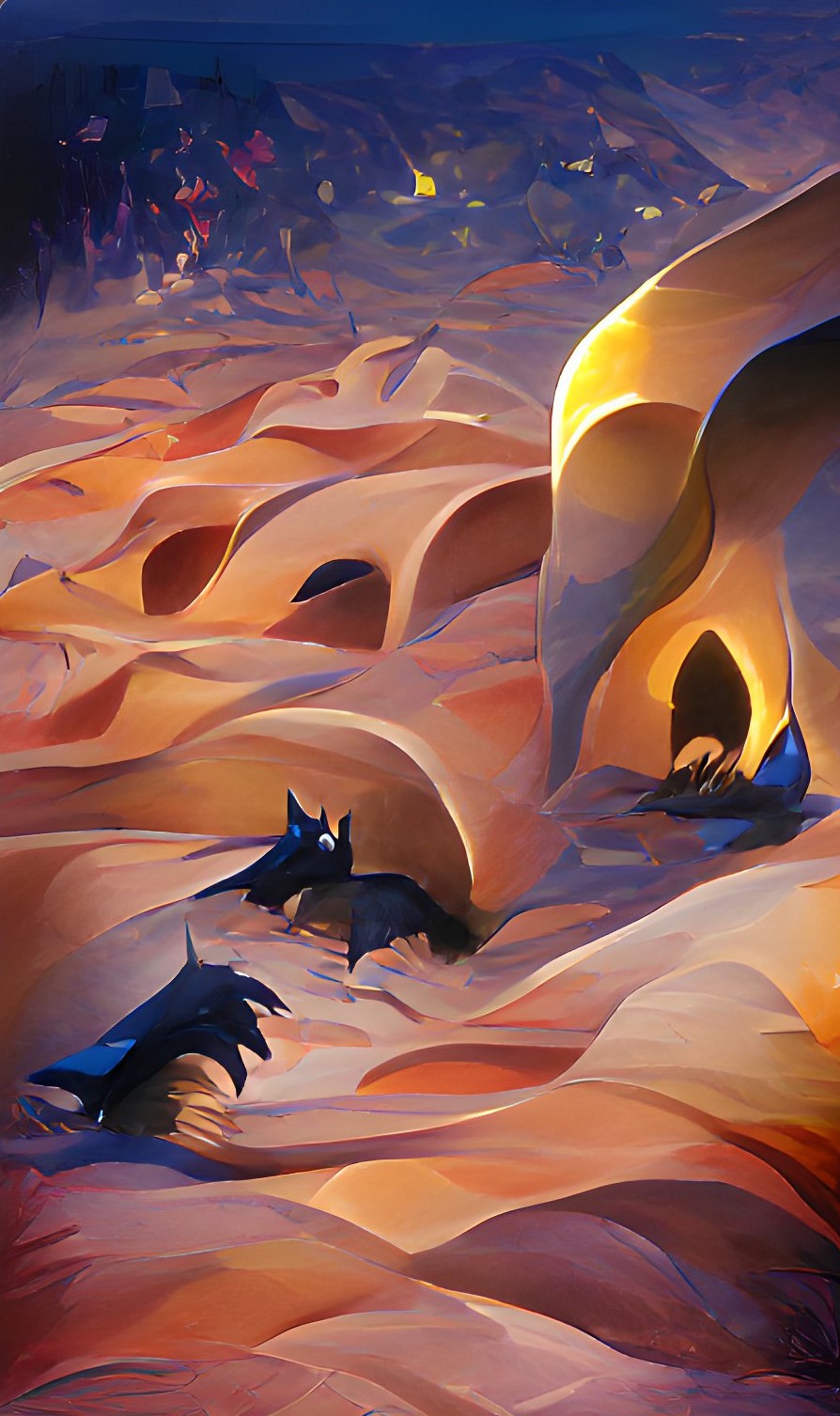 In the southeast, below Viharanyavár, where the dunes cross over into the plains the area somewhat resembles a hole-filled cheese. These holes lead to a chaotic and expansive tunnel network that has never really been explored, because tales of giant many-limbed insectoid monsters have scared off any would-be raiding party. These hangyárova as they are called, are surprisingly well-coordinated and there are even tales that say some of them can spit acid. Regardless of the veracity of these tales, it is true that caravans that pass near here often disappear.
Neighboring regions.
Swamps of Vörövisz.
Tukhamu Magas.
Alternative Name(s)
Eltóriások, Land of Lost Giants
Included Organizations
Inhabiting Species