In the outlandish landscape of the Bones Valley, a mysterious figure has been reported by our explorers. Covered in a dark mantle and with an Otadan mask on his face, little is known about his identity.
— Amaya Loyola

The Bones Valley is famous for its ancient fossils, which attracted in the years numerous explorers and treasure hunters in the area, searching for knowledge or more material gains.   One of the frequent dwellers of the valley, though, seems to be less interested in taking away as he is in reorganizing the landscape in a beautiful and unsettling way. Overnight, some of the skeletal remains seem to take on a life of their own and reassemble in life like poses.   Horned whales emerge from the sand that covered them for thousands of years and are found in the morning positioned as if in mid dive. Horses who more recently lost their lives to illness or predators reappear perfectly cleaned, their candid bones immortalized midstride. Entire humanoids groups materialize again, no more in the disarray of death, but as if still camping around a long extinct fire.   For years the explorers have been puzzled by the strange occurrence of these artifacts and the identity of their creator. Some believe the Bone Collector is a necromancer who reanimates the poor remains for his own scopes and then freezes them in time until the next use, others deem him an artist who chose this as his creative medium.   The Bone Collector real identity SPOILER! Don't read if you are one of my players!
The real identity of the Bone Collector is a secret known only by himself and his most loyal companion.   Born the first son of the shaman of a Red Fox tribe, he was expected to follow the father's steps and inherit the spiritual guidance of his people. For this reason, in his early years he studied in depth the tradition and rituals of the Otadan, including some of the knowledge at the basis of Red Fox witchcraft, but only a few weeks before his Yahotann celebration and his investiture as a shaman, a young Saythian explorer arrived at the camp.   The two quickly become close, despite the language differences, animated by the same love for adventure and wildlife.   The encounter inflamed the wanderlust of the young man, who informed his tribe of the decision to renounce the role of shaman and join the Tribe Guardians instead, hoping that will give him more chances to explore the world.   His decision clashed against the inamovable rejection of the father and the other elders, who considered it a betrayal of all their traditions and locked him in one of the tribe storage pits, hoping that would change his mind.   On the contrary, this solidified the feeling of entrapment of the young man and lead to a fiercer desire to escape those boundaries. During the night, with the assistance of the explorer, he climbed out of the pit and the two escaped the village, never to return.   For years the two traveled together, roaming the whole extension of the Gadah Atsakai from the sandy desert in the south to the icy planes of the north, mingling and living for a while among the tribes they encountered along the way. During this time, he learned not only the languages of the other three Otadan nations but took particular interest in their religious practices, adopting some of them in his daily life.   While visiting a Black Wolf tribe, they rescued a coal black stallion who was going to be butchered because, wounded, couldn't keep up with the herd during the migration. The two took care of the animal for weeks until he was able to resume the travel with them, and became their loyal companion for about five years.   Unfortunately, old age caught up with the steed and he succumbed while traversing the Bone Valley during a punishingly hot summer. Overwhelmed by grief, the explorer at first refused to consume the meat of the animal despite their own malnourished status. The young shaman eventually convinced them and after removing what could be easily consumed, buried the carcass not before painstakingly cleaning the skull and positioning it on top of the mound as a marker, praying for any gods who would listen to him to preserve the remains and the soul of the animal.   Recovered some of the energies, the two continued their travel, but couldn't miss all the skeletal remains ancient and new that littered the place unattended. Some of them were scattered and incomplete, taken advantage of by any sort of scavenger. While the importance of rendering the mortal remains back to the earth had been instilled deep in his mind, he felt unsettled by the chaotic array and started to reconstruct and rearrange the bodies, at first just to complete as much as possible of them and simply laying them back to the ground. But soon he became more adventurous and started to try to recapture the soul of the creatures, displaying them in natural poses reminiscent of a joyful moment in their lives, before blessing them with a prayer to whoever wanted to listen.   20 years have passed now from that first burial, the number of his creations are close to the thousand, disseminated through all the Bone Valley. He now acquired more knowledge about the magical crafts of his people and the newest installments are magically protected from vandalism and elements. While he still spends several months a year traveling with his life long companion, he spends almost as long alone, under the dark robes and horned mask of the Bone Collector, giving his blessing and restoring dignity to whoever lost their life in the Valley.   While visiting every year to inspect the burial site of his horse, he still hasn't attempted a reconstruction, claiming not to be ready yet. 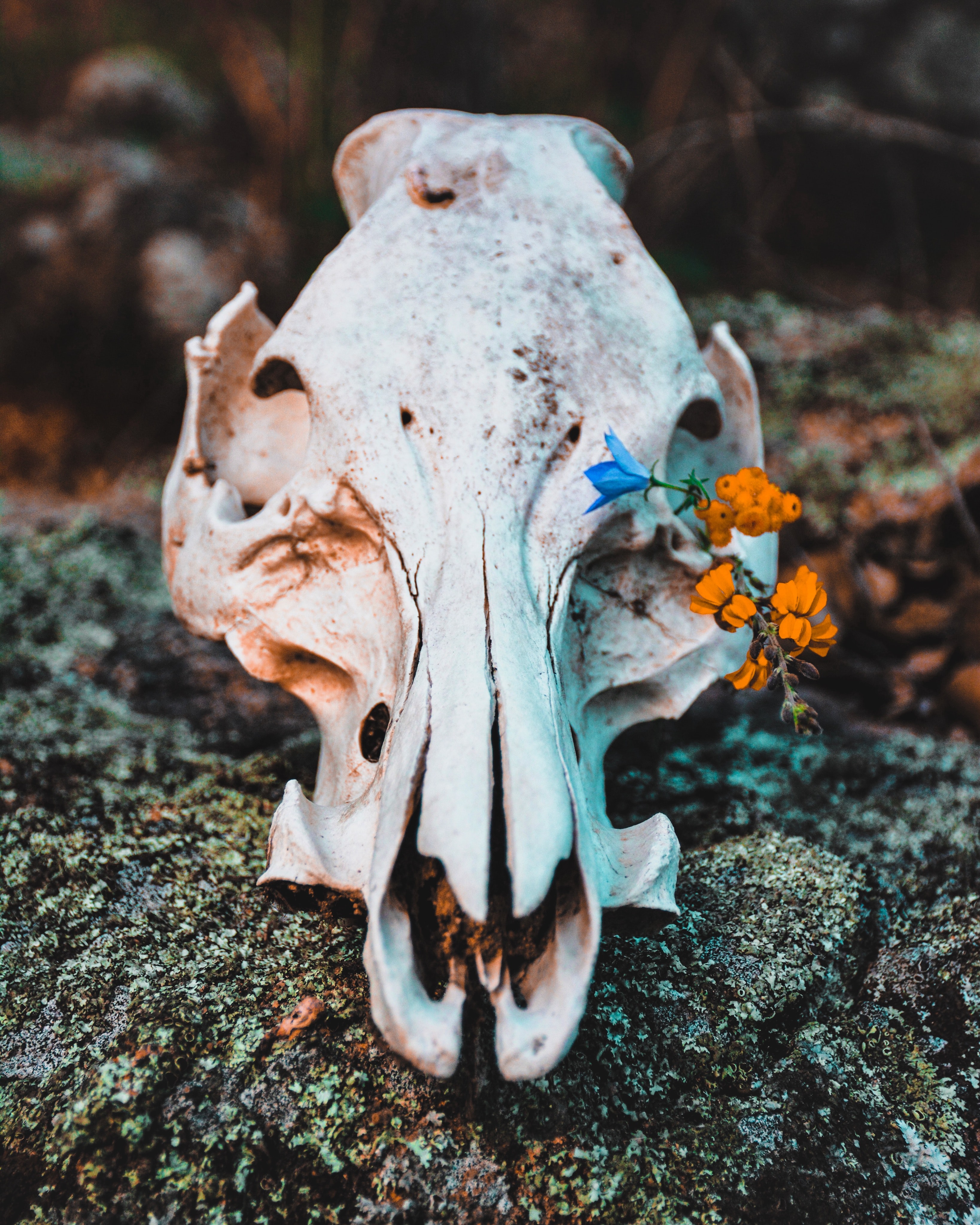 This article is dedicated to Naelin, Saviour of Stubs, who accidentally inspired it with a conversation about a thing we both care about. And it's also dedicated to my Ginny and all the pets we lost in our lives, may we find each other again on whatever it is on the other side.

I love everything about this article--you did such a fantastic job!

What a sad, sweet story. <3 Thank you for writing it.

I feel so honoured about this article and dedication. It is a beautiful concept, and it resonates deeply with me, especially the last sentence. It is a hard thing to do, incredibly hard, but it is worth it. I hope he finds the strength to do it one day.

This is beautiful. Thank you for sharing.