Hintadu tribes believe in the exhistence of an evil spirit who gets attracted, to imbibe itself with their essence, by the people who has been abandoned or despair to be rescued. They believe it raids battlefields in the aftermath of the bloodiest carnages and it will show up when a lost explorer starts to lose the hope for rescue.

Dyzak'tenhtad'ú is a colossal spirit with multiple sets of feet similar to the ones of a giant chamaleon to support a long flabby abdomen that terminates in a lizard-like tail. The thorax is humanoid very muscular, according to some tribe presents breasts but the thick pectoral muscle makes them rather discreet, with four arms two armed with falchions, one holding a shield and one occasionaly armed with a kris, but other times is described unarmed or used to support the wooden mask that protects its face. This is a large mask painted in black and red pigments, vaguely ovoid in shape with a scary face carved on top. The skin of Dyzak'tenhtad'ú grants it the ability to camouflage into the surroundings, making very difficult to spot unless it wants to be seen. He would generally approach dying soldier who have been abandoned for dead on the battle field to feast on their essence, this is considered for Hintadu culture a way to prevent a slow and painful decease. In the case of explorers that have lost hope for rescue it will creep around for a while observing its prey to foretaste their desperation, doing occasionally some noise to increase the tension, eventually it will grow tired of teasing and will show up abandoning the protection of the camouflage. In the vast majority of the versions Dyzak'tenhtad'ú doesn't have a face under the mask because he has been forgotten by people itself and one clever kid who lost the road back to his village once called it by name and was spared and brought back by night to the village.

Hintadu are considered by occidental population very superstitious and appear to have many spirits to explain events that present a more logical cause. The description of the creature itself could come from a basilisk, or something similar, that having the power of paralyze victims staring at them has been altered in this creature in response to the trauma. The part regarding the soldiers is probably the results of a mass self-exoneration process, because the hintadu tribes having been fighting each other for many generations and often there would be unexpected skirmishes with multiple losses that often would be left behind for dead, they needed something to silence their conscience. Finally the territory outside from the villages is very dangerous and tracherous therefore getting lost has to be considered a major danger, as often rescue parties will struggle to find the tracks unless the weather is really good. The story of the kid is probably just been a casual event not linked to any spiritual events, but intepreted in this light by over-active minds.

The myth is part of the common heritage of most Hintadu tribes. It is considered deplorable to mention the name of Dyzak'tenhtad'ú to people not belonging to the tribe, in some tribes can be punish severely.

In some version the creature will speak a language that people cannot understand at first but it will gradually get more familiar as the time goes by. Anyone will be able to understand as if it was speaking their own language. Eventually Dyzak'tenhtad'ú will ask the victims if they want to see their face to find that under the mask there's nothing but flat featureless skin that will vorticate draining their essence. Different tribes descrive the process as painful or very peaceful. A tribe of the extreme south-east mentions that the kid of the original story has been brought to visit the otherside and did become the first of the people with the third sight. 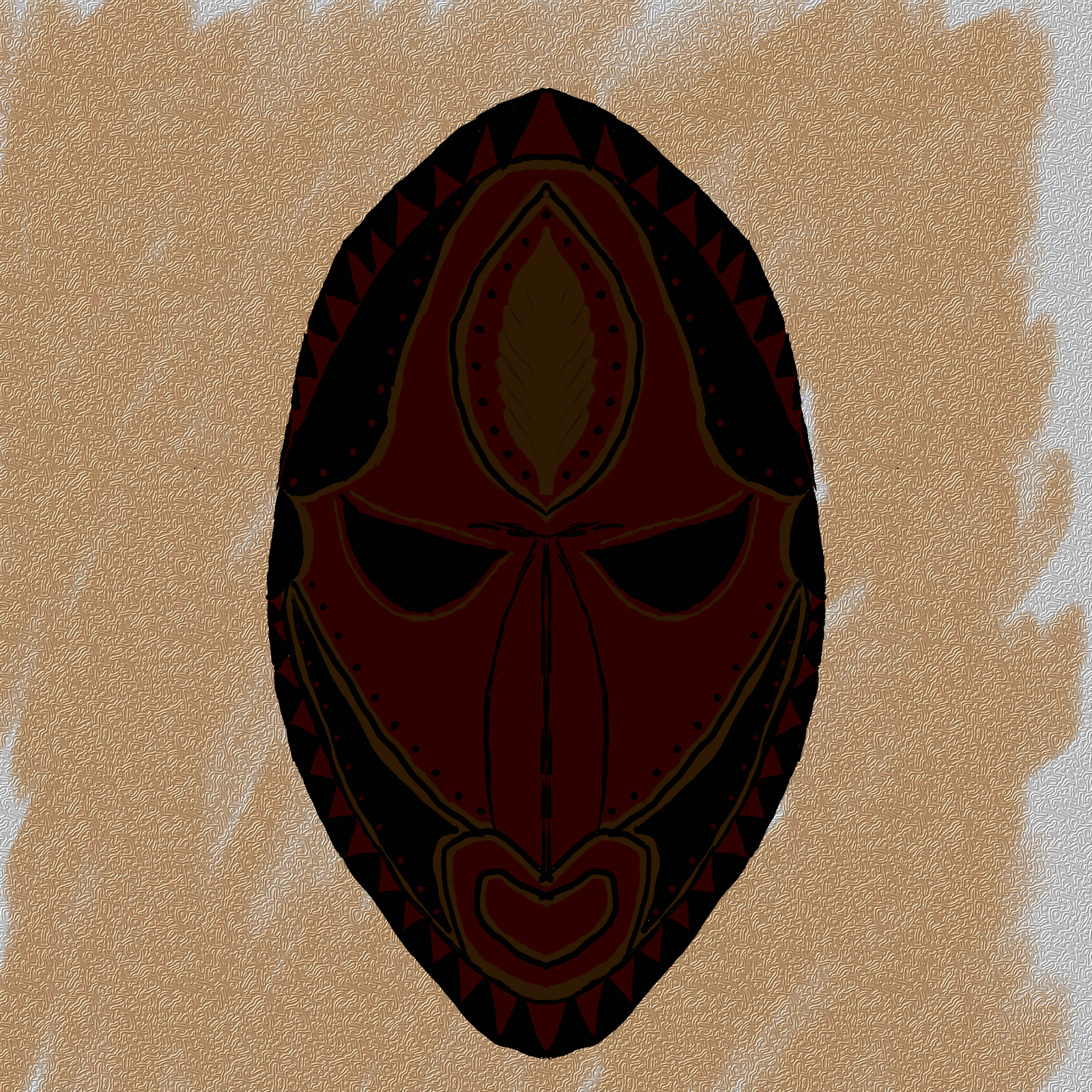 This mask is carved for apotropaic purpose in most of the tribes and villages of Hintadu people. It usually worn by a shaman or healer when he recounts the tale to transmit it to the new generations. Some specimen have been obtained by explorers and brought back into the west of Phaldorya.

It has been orally passed through the generations from before the conflagration.

I have in plan to try to do a sort of picture but I have to see if I come up with something good or not, time will tell :-)