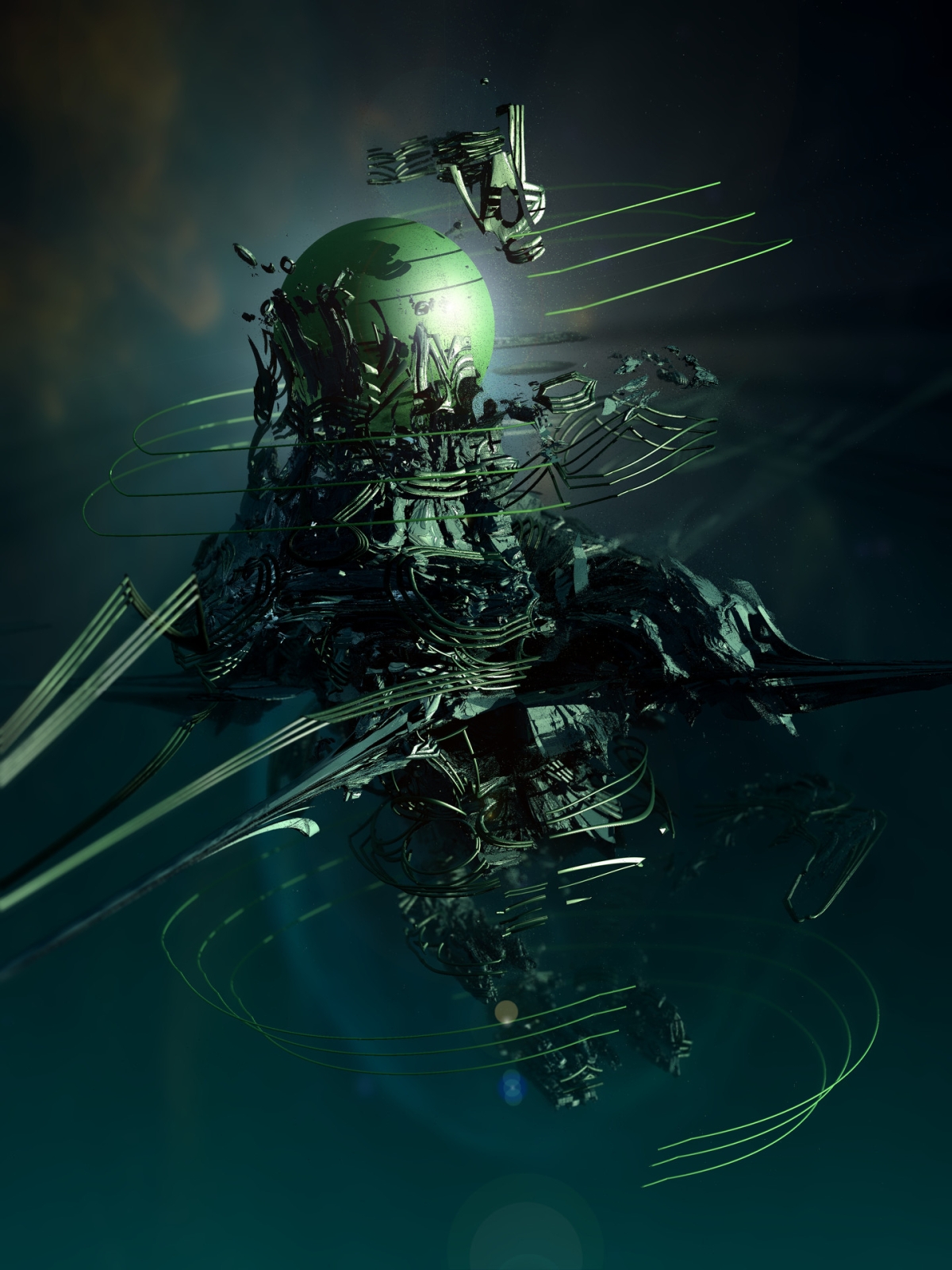 Viennese Waltz is a government-run initiative between the tangible and intangible sides of the council that cleanly cuts through the two worlds in Bhulok. It was formed from bringing two parts close together and inhabiting the space between.   One half contains the billions of streams of sapient code, and the other, thousands of flesh and metal people. It often acts as the preferred neutral ground for:

This space acts as the connective tissue in a joint to either ends of Bhulok Station.   The facilities that make up Waltz contour into a roughly cylindrical area of around 10,000 square kilometers and can accommodate about 1000 patrons at a time. It is mostly empty space, for ships to maneuver and dock onto clamps and cranes that line the inner rim.   Split down the middle, the bendsadri side contains wall-to-wall crystalline server matrices for processing the whims and wishes of those inhabiting it. While the other lays out a traditional orbital floorplan for walking about and limited amenities.

Baring entering while wearing a talo, epsilonians and thetíans can only access the Bend's services by establishing a VW account.

There two parallel slits for small ships to enter and dock inside the venue. It remains open so long as the parts of Bhulok continue to evenly rotate about the axial bar.

The inner rim is cast in a perpetual semi darkness. A green shadowy glow from the plasmic generators permeate through the central axial during the transference of energy towards the various subsystems in Bhulok as a whole.   Contrastly, shades of blue refract from the inner rim while twinkling whites from the underside mimic the old home's nightly skies or sparkling oceans. Shadows from passing patron ships add a further unintended effect of dragonesque shapes seeming to prowl the screen.   Additionally, public speakers are attuned to the counting station to drown the vacant quite with a free rhythmic sound that no one understands and become noise blind to.

In an endless pursuit of sensory pleasure, a billion lower runts of non-corporated thetíans are kept idol by self-stimulating their neural pathways to experience the tastes of foods or orgasms through a cocktail of brain chemicals that simulate inner peace.   There is a minority of elite thetíans who forge business contracts with their Delphi counterparts.

An independently minded, near nomadic, culture who hopscotch between alien places

Alphi explorer ships are the most common to be seen docking and leaving the outer hulls and supplemental docks by which they enter.   By far they make up the largest human group to traverse Manidweepa, though they do not always appear human. They have a greater perpetuity to grow their bodies to resemble that of traditional livestock or mythological creatures.

Due to the 'copy and paste' replicability in the code that impart these temporary effects in the digital forms of Epsilonians and Thetíans, these items are already universal in Bhulok's servers.

Due to the economies of scale from the hundreds and thousands of biofactories manufacturing foods for Delphi and Alphi are incredibly cheap.

Electronic telecommunications device that monopolistically enable users to send and receive public information and private messages from outside the Opal Portal.

It is not unexpected for crews to vanish while on their runs in Manidweepa. Those might fall through a random portal or be taken by raiding meridians; but I'm talking bout that one dope drinking at the bar you never see again.   And no one notice this before, but there's alot of synthezoids that just turn up, without their pilots, seeming to be abandoned in their storage pods or hotel rooms. And no one can contact them ever again.

A clean energy system that siphons the free floating plasmas into a centrifugal generator that draws directly from the electronic imprints in the substance.   The electric grid consists of communication lines, control stations, transformers, and distributors that aid in supplying power from the reactor plants to the consumers. Presently, the electric grid constitutes humongous power production units which generate millions of megawatts of power distributed across several departments.

Publicly available monorail carts that run the length of the valley slits' edges, between the spherical generators that cap the ends.

Centripetal architecture normally follows O'neill cylinders where living space is arranged around a hollow center. As if its heart had somehow fallen outside its body, an upside down area hangs overhead no matter where one is.

The bar refers to the protoplasm powered lamp that puts out light in green and yellow frequencies. This lamp functions as a sort of 'sun' for those inside and is typically thought of as the 'common downward' for those at either side of the cylinder as that way is the most expedient exist.

The cylinder's inner circumference is mostly bear save for hundreds of cubicle rooms with open ceilings towards the axial lamp. There, crews can access the serviced meals and open entertainment onboard the bars and corridors that float between the rim and the lamp.

The outer circumference of the cylinder is not typically considered as part Viennese Waltz. It mostly consists of rentable single rooms, living apartments and the odd conference rooms whose lights can shine through to the inner rim windows like starlight.

The billions of thetíans who inhabit Bhulok emit the dignitatic auras that protects the settlement from emerging into some monstrous sentient entity.   It takes the shape of an invisible cylinder that encompasses the twisting ridges that continuously spiral about the area.

Immigrating inside any server is a form of shell shock to epsilonians who have been wholly accustomed to slow introverted mediation; suddenly entering a fast and crowded environment.   Once they enter, it is difficult for them to leave. They tend to conjugate around areas with Alters and Cores to amalgamate with them and form completely new personalities.

A militaristic culture stagnant under the demands of their mission

It can be a harrowing sprint for asylum seekers from Dyson's military council. You may not see it when you see it, but runners need to be able to deploy clever delaying tactics so they have time to make it from the other side.   Once they cross, no one can force them back, but they also can never leave Manidweepa again. They tend to dissappear among the throngs of passing crews to find new employment and establish new lives.

It is extremely rare to find a betan of either class anywhere, other than their home system.   On the off chance there is an admitted betan, they are like to be a criminal of some kind. Not because they are anymore violent than anyone else, but because they would need to possess some far superior skill or connections or authority to not get caught leaving either the panteons or the probes.

The viennese waltz was an olden form of fast rotary dance whose movements were idealized to turn two into one.

lift your dresses high like cloaks, and bring your bodies under one cover

The dance required two distinct bodies to be arms' length from each other and in either a clockwise or counter clockwise motion.

It is quite a stretch to consider Viennese as an o'neill cylinder.   But I suppose I can see the symbolism in two stations built from recycled parts revolving together. They're barely touching though.

Competition Homepage
In response to the prompt Write about a pub, hotel, inn or tavern... Who stays there? What's the food like?

Wow! I love the name that also represents the interaction between the two worlds of code and material and is reflected in the design. Check out my Tavern challenge entry: The Destill - Dwarven Spice Tavern

This is pretty much of pretty extraordinary information to chew on! A map of the VW could serve it wonderfully, as well as some slow easing into descriptors of the tavern. I am uncertain if it is because of my ADHD, but half of the time I felt "lost" in the article not understanding what I were reading or how it connected to the rest of the tavern. It seems like a really cool place, but I just can't get a grasp on the whole picture of the location.

Thanks for your feedback. I've tried to straighten out the overall description but it may still feel a bit disjointed depending where it is mentioned on which page section.   It is rather like a drive-thru but with space vessels parking inside a dedicated O'Neill cylinder as part of an 'alternative space'. Did it come across any clearer?

The idea of two planes meeting like this, is real intriguing. And I really like all the menu options, including repairs.   I do find it's a bit hard to understand terms without reading the linked articles, perhaps a few short summaries here and there to help the layfolks out?

That's a great suggestion. Which areas would you say need summaries?

Pfff... You got a lot of red links without excerpts, maybe begin with the ethnicities?