Throne of the Central Emperors

It magnificently rises above the clouds and watches over the land below, the symbol of dominance and lordship of the mortal kin over all the land of Aon and its sky. A description of a traveller who visited the Throne

The legend behind the beginnings of the building states that after the Eather gods gave up their divine power of creation and withdrew themselves from all interference with Aon, they came to the mortal kin one last time to herald their decision to hand over the rule of the world to them. Prior to this, the sky was seen as a godly realm, the binding point between the heavens and earth, left for only the wonders of nature such as mountains to pierce it. With the newly given dominance over Aon, the mortal peoples saw it as their duty to now take their eyes up to the skies and erect a monument as a testimony of their lordship that would break this divine status.  From this point, physical evidence exists of the processes that lead to the creation of the building, although slim and of uncertain origin and relevance. A stone tablet that was discovered somewhere around 2880s in a ruined library and then sold into the collection of the Tsarist National Hermitage speaks of a congregation of architects that was assembled somewhere around 10CE (Creationism Era). They were supposedly the ones to be tasked with selecting the location and design for the immense structure, as well as organizing the entire building effort and logistics of it. Much of the archives containing information from the period from that time were destroyed during the chaos of the civil wars that ravaged the continent later on, so up to date, this is the only such descriptive source of information concerning the matter. Scholars, despite no other supporting sources, generally tend to agree on the truthfulness of the tablet's contents, seeing nothing out of the ordinary about such a congregation. A project of this size and importance was certainly a task unfit for even a small group, so a big meeting of all architects from the land makes sense in terms of preparing the construction.

Centre of power throughout history

It had been and is still used as a centre of power for differing organizations. Chronologically, the first one utilizing the building this way was the Great Central Empire, from which use it still bears its name - a throne to the prestigious emperors that commanded a whole continent from atop its terraces. After the collapse of the empire, later uses are as follows:

While still within the borders of the Solarian Regency and considered there second only to Sūrya in importance, it now also serves as the heart of the Consortium of the Central Continent, being the place where the General Council meets.

The building is a single superstructure with a height of over one kilometre. The main support is a pyramid, with proportions typical of a tower - relatively small base compared to the height. Due to the highest terraces, the monument appears to have a flat top upon which the domed part rests upon. From each of its sides extend out centered, cuboid terraces - five for each side, layered one over the other. The Throne is topped with a smaller domed structure, atop which grows a sacred tree, meant to be a representation of the Eternal Tree of Creation. Within the mentioned section, lies the hall that houses the great Continental Throne itself.

The most dominant colour is white, as the outer casing of the Throne is covered in polished white limestone, which is protected with a thin layer of a transparent preservative so that the colour is undisturbed by weather conditions. Besides this, colouristically, there are only golden accents, most notably the dome at the very top, as well as slight presence of greenery, due to each terrace boasting a large white-trunked tree.

To see the cultural importance of this building, just look at how we count years. Where did we start counting? At year zero. And when was it? When the first cornerstone of the Throne was laid. professor prince Gebhard Vielendorf

The construction of the Throne began in the year 0, marking the beginning of the Temporal Era (TE). It took 21 years to finish the enormous project, with people of the whole continent contributing to its creation. Upon completion, the Continental Throne was carved out inside the highest hall, marking the official proclamation of the monument as the seat of imperial power.   It continued to be so for the next centuries up until the collapse of the Central Empire. Then, it changed hands between a few fledgeling nations, ending up within the Solarian Regency, the rightful heirs to the imperial line. They named it their capital and for a long time, it remained under their control. But with the outbreak of the so-called "Second Reinstation" and the following civil war, the Throne was taken and held briefly by the Neo-Central Empire, which soon after was defeated and collapsed entirely.   Afterwards, the monument returned to the Solarian Regency, although it was no longer recognised as the official capital but just as the historical one. Up to the current time, it remained like so, with the only change being that the Consortium of the Central Continent has additionally occupied the building as its governmental heart. 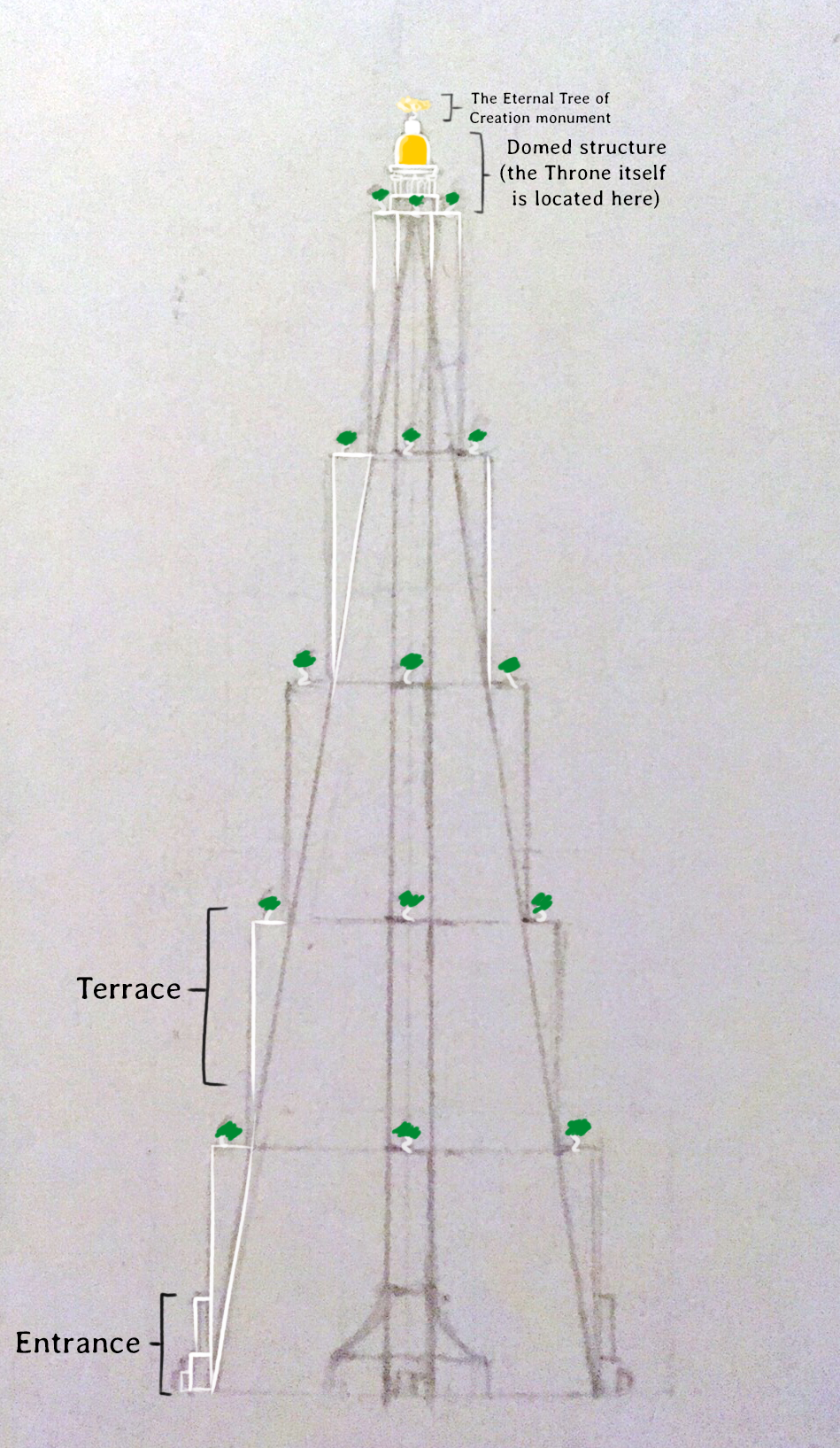 Its most impressive part has to be the dome and the tree that grows atop it. A great symbolic thing, let me tell you. Taith about the monument

Answering: "Describe the most impressive landmark in your world."
Visit Paradox's Competition Page Check all other answers to this prompt Competition Homepage

Wonderful use of in-world quotes, and a concise, representative sketch to boost ^-^ Try adding a spellchecker plugin to your browser with an English dictionary (British by the look of it) so that when you write your articles you can instantly weed out avoidable mistakes. A very enjoyable read over all!