The Tsarist Supreme Command understands the necessity of having specialised formations to support the baseline soldier. The Gorodski-proryv reflects that. They are trained rigorously only for urban fighting, they carry very specific armament and demolition equipment that would normally be too situational for normal troops to carry – but their unit is, in essence, situational, and that allows them to excel at their niche like no other. They alone wouldn't be able to function on the battlefield, but when they are deployed to support a normal attacking force, they can be a gamechanger. Wilhelm Volyetsk, officer-instructor at the Tsarist War Academy


The Gorodski-proryv Troopers are a specialised ground unit of the Tsarist army, dedicated to breaking through enemy defences in urban settings. They are considered a situational support formation, not being able to operate effectively outside of the urban landscape.

Due to the fact their weapons can also affect them, all Gorodski-proryv Troopers are equipped with a gas mask, a steel-sheet torso vest, a steel helmet with a reinforced front plate and a metal neck guard.

The most characteristic element of the formation is the heavy reliance on crowd control and explosive-based weapons. Each trooper is equipped with a bundle of 2 anti-personnel and 2 armour-breaking stick grenades. They wield modified RAR-065s, which have a special attachment integrated into the barrel that allows them to launch smaller explosive charges at larger distances when compared to arm-throwing ranges. Additionally, there are soldiers with given roles within the formation that receive additional weapons:

The unit is meant to break enemy defensive positions in urban landscapes - street barricades, fortified houses or apartments, etc. Their attacks usually are based around a two-phase process. First, after having received detailed information on the surroundings from the scout unit, they will swiftly move in closer to the enemy position, usually between 200 to 300 meters, and soften it up by hauling grenades towards it. Then the second phase begins, which is a coordinated charge attack under covering fire of mortars and hand-carry cannons. 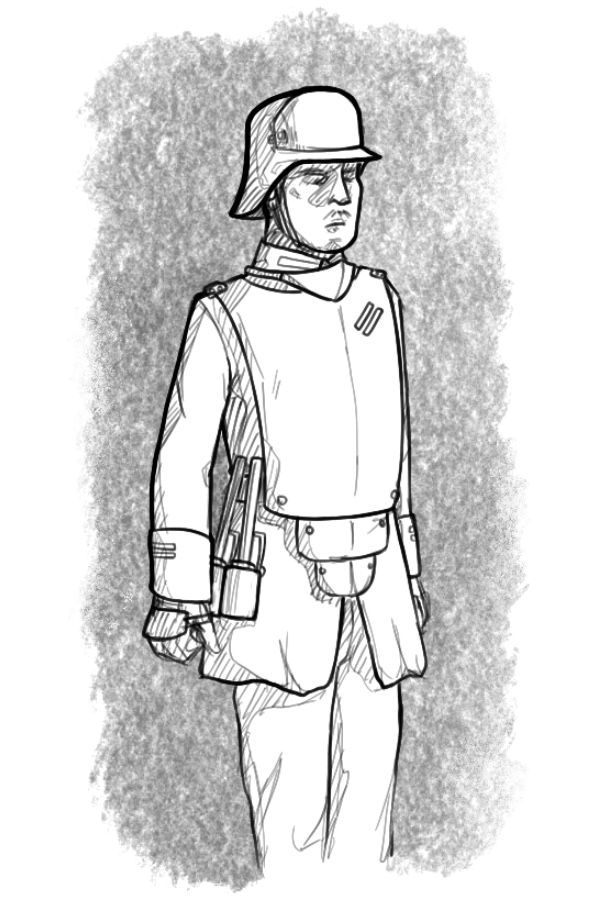