The problem of humanity is the following: we have paleolithic emotions, medieval institutions, and god-like technology.
— E.O. Wilson

The future is a strange, yet familiar place. Humanity has achieved its dream of space colonization, going interstellar with wormhole stargates. Over a century after a terrible dark age ended, civilization enjoys an age of peace united in the Stellar Compact. Can it last, or we will revert to the old ways of war and strife?

To what degree are ancestral human behaviors compatible with high technology? Will our base drives towards anger and war inevitably lead to civilization-ending destruction when given access to technologies such as nuclear weapons?
Might someone try to design a "better" intelligent species without this problem?
What are the effects of technology on society—does technological advancement cause or require moral advancement?

Can we actively shape the course of history to greater or lesser extent? Or are we just along for the ride, pulled by the inevitable forces of aggregate individual action for better or worse?   Historical events include the Wormhole Rush, Age of Strife, and the modern era of peace, the Pax Stellarum.
The cosmos also holds tantalizing remains of paleocivilizations who went before us—after all, why should we be so arrogant as to think we're the first? Among them number the ancient Jeffersonians and the enigmatic Geometricians, whose floating ruins litter several worlds.

Expulsion of humans from their ancestral homelands on Terra

Just how unique are human perspectives and behaviors? An alien, uplifted animal, or genetically-engineered posthuman will have different ways of viewing and thinking about the world. What happens when fundamentally different mindsets meet?   Intelligent species include aliens such as the group-sapient tanrin, radially-symmetric Enclavers, and color-changing Nikrit, plus posthumans like the winged avens and space-adapted caelans, and uplifted animals such as torens.

The universe of Parastellis is not a grimdark dystopia, but neither is it a utopia—such a thing is impossible. Instead, it is a time hopefully better than our own, where humanity has finally gotten its act together—at least for now. I am striving for an air of scientific verisimilitude, even where I depart from known physics, since I think that feeling of internal consistency and believability heightens the sense of wonder I love so much from other science fiction media.
A great many science fiction stories and projects are focused on military affairs, particularly war. While that stuff is there in the background, I prefer to center my work around other concepts such as exploration, first contact, and political science. There's plenty of drama to be had even when people aren't fighting!

My main creative goals with this project, beyond worldbuilding itself, are in writing stories and, recently, making artwork. I'm currently posting a web serial in forty-odd parts, entitled Shadows of the Keepers, and other stories are in the works! I've also taken part in community challenges such as Summer Camp and WorldEmber.

When Eric, alongside his classics professor and fellow students, joins a mission to a recontacted colony world with pre-medieval technology, he learns dodging dinosaurs and gryphon-riding hunters while trying to stop an evil warlord is more trouble than he expected. Crossing paths with a wandering knight, a crew of sky pirates, and two winged posthumans, can his expedition end the tyranny of Caesar Dulane and uncover the mystery behind the planet's enigmatic founders?

Shadows of the Keepers

An interstellar expedition must stop a warlord on a recontacted planet

Researchers on a planet whose civilization destroyed itself in nuclear war unearth a deadly piece of history.

Ready to start diving into the lore? Keep reading, or go to the homepage and have a look around! Articles are constantly being added and revised as I bounce around between this project's various aspects and stories.

Parastellis's history begins in our near future, when decades of spendthrift resource use and environmental neglect force an end to the capitalist age of economic growth. What results, after long periods of strife and struggle, is a more sustainable but also more impoverished, and permanently-damaged, Earth. Then a miracle happens—humans discover a means of creating stable wormholes, and the gates to the stars are thrown open. What ensues is no less than a space race to find and settle new worlds. A handful of bright people, realizing that the final reckoning between human greed and the limits of a finite planet is yet to come, undertake a project to ensure the colonies' self-sufficiency were contact with Earth lost.

This comes to pass in the End of Earth, and the colonies are isolated. What follows is a grand renewal of the planet, now dubbed Terra, alongside the rise of sapient artificial intelligences and bio-engineered posthumans. The old wormhole network is rebuilt and starts taking on the form of what will become the modern Starweb, connecting hundreds of solar systems. This is the Second Interstellar Period, a time of great-power conflict and warfare as humanity, its descendants, and the alien species it encountered squabbled amongst themselves on the interstellar stage. Many battles were fought, wars won and lost, but this was not a noble age.
War crimes were endemic, many smaller nations were bullied by major powers, and entire planets routinely coerced into surrendering with threats of mass orbital bombardment.
Perhaps inevitably, this period came to an end when something—it is hard to tell what, maybe it was a minor brushfire war in just the wrong place and time—touched off a general apocalypse. Entire worlds were slagged to ruins, and civilization tumbled into an interstellar dark age. Even today, some planets remain lost from these sad events.   The current era is the "Pax Stellarum", an age of peace which began with the formation of the Stellar Compact as the Starweb got back on its feet. Absolute state sovereignty, of the type seen on old Terra and during the Second Interstellar Period, was judged existentially dangerous since it prompted arms races and wars which, when conducted with anything approaching advanced interstellar technology, could easily destroy civilization yet again. Therefore, a supranational union was empowered to regulate international affairs with binding force. This has many components: legislative assemblies, courts, the Star Patrol peacekeeping force, a Truth and Reconciliation Directorate to atone for crimes of the past, and an Exploration Service venturing into the unknown.   But not all are satisfied. Some consider the Stellar Compact just another tool for the rich to exploit the poor, while others think freedom is simply too important to submit it to some far-distant international authority. If they get their way, it seems the Starweb will revert back to the bad old days of brutal warfare and planetwide destruction. Or is that too pessimistic?

The Starweb, to say nothing of the cosmos beyond, is home to a wide array of intelligent species. Humans have spawned a variety of posthuman offshoots and uplifted animals thanks to genetic engineering, all the while encountering truely alien species with sometimes-radical differences. 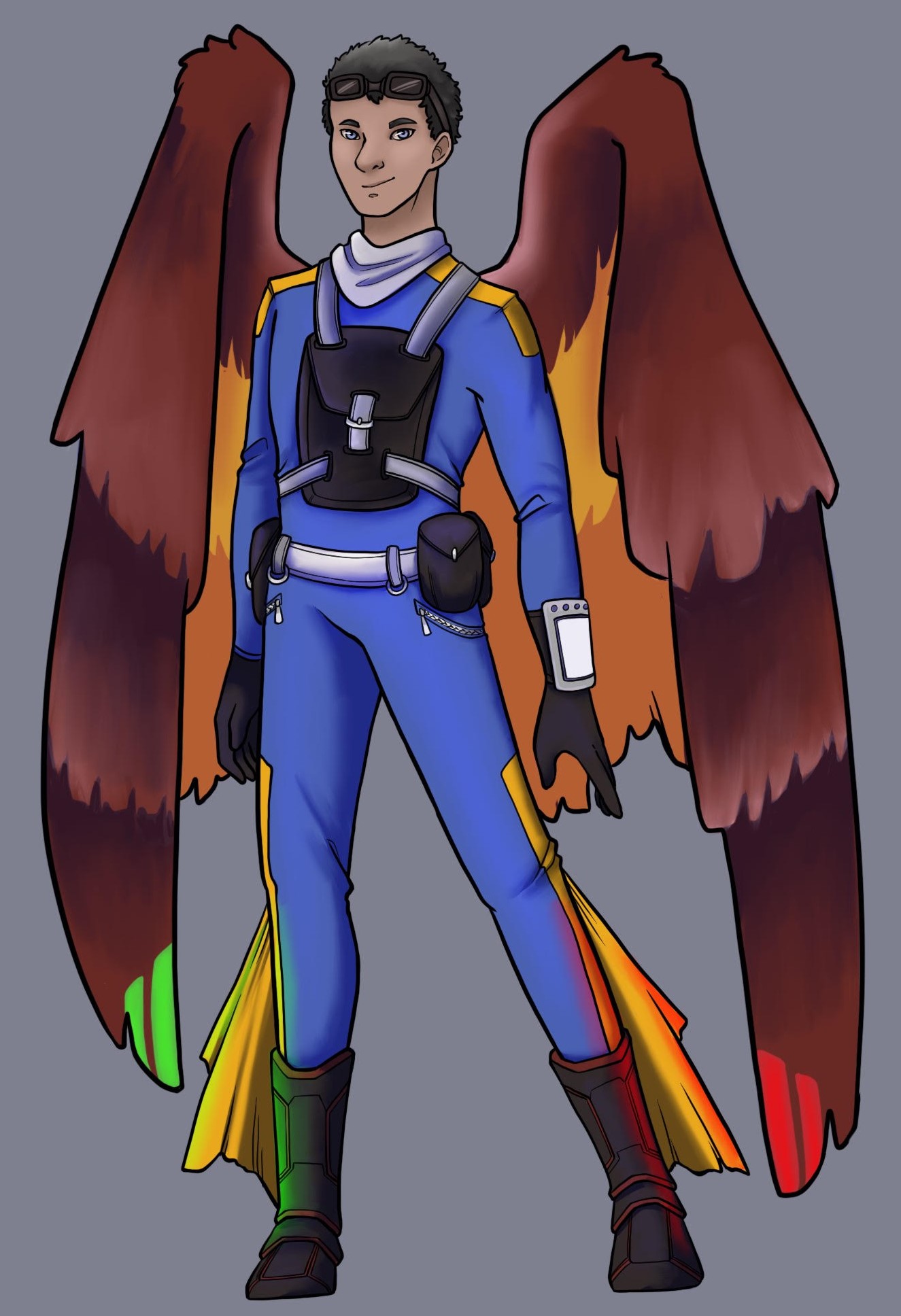 by /u/Morffaeus
An aven, a species of lightweight winged
posthumans created by the artilect Helia.
Read more about intelligent species!

Parstellis's technology tries to stick to what seems at least vaguely plausible, with deliberate departures in the area of metric engineering (including wormholes for effective-FTL travel) and paraforces (a "handwave" to justify some beloved tropes like kinetic shields and levitator vehicles).           Read more about science and technology!
Misc
Parastellis and related works © 2022 M.J. Tremblay/AntimatterNuke, all rights reserved.

Beautiful introduction. Love the formatting! You touch all the bases quite well and even to me, someone who's been around the world, it offers some insight and fosters a desire to learn more. Well done.

Thanks for the feedback, that's exactly the impression I was hoping to make!

I think this is incredible! It has a thought-provoking, wondering opening, and then you get right into it while showing that it's still a meta article. Also, nice formatting!   And I can't believe how possible some of the things are in this world, like the earth being more sustainable but dying, practically. Ruined. Poor Earth.   The jargon here blows my mind...in a good way. Seems like everything is well-thought-out and I like that! Awesome job!

Thanks for the kind feedback, that's just what I'm going for with a vast, thought-out universe. And yeah, Earth gets it pretty rough.