The ESRV Challenger is a Whistance-class planetary and xenological research ship of the Exploration Service, part of the science arm of the Stellar Compact. Under the command of Section Captain Arthur Benson, a noted maverick, the Challenger has been notable for its role in such events as the rediscovery of Meridian and first contact with the Uzen.

Described as resembling an elongated arrowhead with a tailfin, and gravity brakes and radiators along its sides, the Challenger was built by Central Dynamics under a procurement contract for the Exploration Service, one of a new fleet of science vessels for the latter half of the second Unified Century. The ship is approximately 400 meters long, large enough to contain a shuttle hangar, ground vehicle bay, comfortable crew furnishings, and a full suite of science labs.   Since it is designed to land on planets, the Challenger departs from the usual vertical arrangement of ship decks in a skyscraper-esque pattern and instead uses a horizontal layout. This puts its exit hatches and cargo ramp closer to the ground, and facilitates a floorplan which does not require frequently changing between decks to access different rooms, but requires a simgrav system to counteract acceleration from the engines at the stern.

Interplanetary propulsion is provided by an array of three fusion matrix engines built from scavenged Enclaver technology, consisting of one large unit at the rear of the main hull, and two smaller outboard engines mounted in the wing pylons. Using a catalyzed deuterium-deuterium fuel cycle, these engines have a specific impulse of over one million seconds and a maximum emergency thrust of around five standard gravities. Normal cruise thrust is 0.25g, for efficiency, and in this mode total delta-v capacity is approximately 2,000 kilometers per second, enabling the Challenger to survey multiple points of interest across a solar system in a matter of a few months. Refueling can be accomplished by scooping deuterium from gas giant atmospheres.
Orbital maneuvering, takeoffs, and landings are accomplished with fusion-thermal engines using water as reaction mass, which though far less efficient than the main torches, do not expel radioactive exhaust and hence are suitable for use in atmospheres and low orbits. These engines are also used in refueling, expelling waste gases after deuterium is filtered out, to counteract drag and re-boost the ship's orbit. Six gravity brakes give static lift, enabling the Challenger to hover in a planet's gravity indefinitely with little energy expenditure.
Heat rejection is provided by four arrays of radiator panels mounted on the ship's sides, augmentable with an additional liquid droplet system which can be run out like a pair of large sails.
Interstellar travel is accomplished by passing through stargates; the Challenger can fit handily through 250-meter standard frontier gates. Its lower hangar bay also has enough space to carry a portable wormhole projector, though it will require the services of another ship such as an exploration carrier or wormhole tender to transport the components necessary to build a stargate.

While not a military ship, the Challenger still possesses high-grade weapons in case it should encounter pirates, feral replicators, hostile aliens, or other such threats in the Starweb's frontiers. Its primary armament are two beam projectors, capable of hurling an ultrarelativistic stream of electrons at a target with enough power to melt through meters of armor. Secondary armament consists of torch torpedoes and lasers.
In combat mode, the Challenger uses its droplet-radiator system to provide additional heat rejection and increase its endurance. Consisting of molten metal droplets sprayed from a nozzle to a collection trough, this system is also resilient to damage since it contains few solid components for weapons fire to strike.

Its first line of defense is its kinetic deflectors, tuned to detect incoming fire and impart a force on it to deflect it aside. This only works on material projectiles like missiles and torpedoes, or e-beams at long ranges, lasers pass right through and are instead dealt with by a layer of superconducting armor plating. The deflectors are also augmented by lasers for point-defense.
But perhaps its most impressive defense, and most impressive weapon as well, is its torch laser. This system redirects the ship's terawatts of engine power into a high-energy weapon by constricting the exhaust and throwing in a lasing medium, creating a flash of x-rays concentrated into a beam. While devastating at close ranges, this beam is not as highly collimated as a dedicated laser and is thus unsuited for striking distant targets even given its immense power. To an outside observer, a firing of the torch laser will look like the fusion engine plume tightening up and flashing from a brilliant white to a deep purple.

As a research ship, the Challenger is equipped with an impressive array of sensors and observation equipment, such as telescopes, ground scanners, and signal decoders. Assisted by its probes and survey satellites, it can map the entire surface of a planet from orbit in short order.

The Challenger has two main hangars, an upper bay for launching and retrieving space shuttles, and a lower bay with a ramp for ground vehicles, connected to internal cargo space via large elevators. Both are equipped with deflector projectors around their exits to retain pressure even when the exterior hatches are open to vacuum, though regulations still require crewmembers inside to wear space suits and tethers in case this system fails—it is intended more as a convenience to avoid the need to constantly pump large quantities of air into and out of the bays during flight operations. 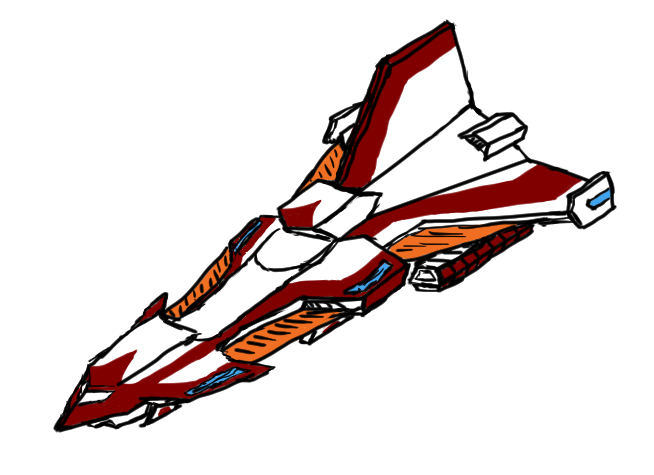 The Challenger's pressurized crew spaces are found in the first two-thirds of the ship, extending from behind the bow to the start of the aft "wings". For radiation protection, they are surrounded by shielding and reaction mass tanks. Its normal crew complement is approximately 300, though it is rated to carry several times this number in passengers when deploying new surface bases or transporting refugees from a humanitarian crisis of the types which are sadly common on many frontier colonies and lost worlds.
Encompassing five main decks, these areas contain all the facilities needed for long-duration space exploration, ranging from crew quarters to food synthesizers to science labs and cargo bays. Each series of compartments within a deck is equipped with its own simgrav systems for crew comfort and acceleration compensation on account of the ship's horizontal layout. (Without it, the lengthwise hallways would turn into vertical shafts whenever the engines were running.) Specific areas of interest include:

Most of the aft third of the ship's structure is given over to tanks for fusion fuel and reaction mass which, when fully loaded, more than double the mass of the empty ship. Deuterium for the fusion torches is stored in cryogenic tanks near the center of this area, surrounded by compartments of water, used as reaction mass to increase the ships' acceleration. Additional water is stored in the large wings and tailfin, and along the sides of the crew cabins for extra shielding.

Six sets of large landing legs are installed on the ventral side, and unfold into pads with high surface area to support the ship on sturdy ground. Since this is not always available in a flat space suitable for such a large vessel, especially on frontier worlds, the gravity brakes can instead be used to hover at low altitude in lieu of setting down. The landing gear also holds pipes and pumps for refilling the reaction mass tanks from local source of water like rivers and seas.

Commissioned in UY 170 as a planetary and xenological research ship, the Challenger's typical missions see it spending long stretches of time in the starweb's frontiers in furtherance of the Exploration Service's mandate. Under Captain Benson its focus tends to be on recontacted worlds and alien civilizations.

Meridian, a lost world in the American Frontier, was rediscovered by the Challenger in 171 UY as it followed up on reports from the wormhole tender which built the stargate into its system. It noted the presence of technological ruins suggesting it had been colonized during the Second Interstellar Period and made contact with the inhabitants, who had regressed to a pre-medieval level. Two years later, Meridian became the site of an Existential Risks Directorate expedition to stop a local warlord and prevent a recontact disaster (Shadows of the Keepers).

The Uzen, a species of theropoid quasi-crustaceans with a spacefaring civilization, opened a wormhole to a system also connected to the Starweb, and the Challenger was sent to investigate, meeting with an Uzen ship. After a rocky start, including the Uzen's fright at encountering aliens centuries in advance of themselves, and their caste-based biology (similar to some Terran insects) causing them to view most of the crew as not possessing intelligence (executing orders instead of giving them), Benson eventually established a good rapport with the Uzen and communicated to them that the Stellar Compact meant no harm. Despite this, the Uzen have largely kept to themselves in following years.

The Challenger's current mission is recon surveys of the planet Lemuria in preparation for first contact. This world is notable for the presence of multiple sapient species, whose ancestors apparently co-evolved around the same time. The inhabitants' civilization is at a high-industrial level of development, with digital computers and orbital space travel. Many scientists are concerned about the nuclear standoff ongoing between two superpower blocs, and urge first contact be carried out quickly lest the Lemurians devastate themselves in atomic war.
For this mission, the Challenger was equipped with an observation shield: a light- and radar-absorbing sail-like surface which, when deployed below the ship, blocks it from view of the planet and prevents the Lemurian inhabitants from detecting it.
Exploration Service

Very well thought out and incredibly detailed. The only addition I would make is possibly in either the "other crew spaces" or potentially in "cargo spaces" is the addition of a comment about gym or exercise equipment. Even modern submarines have a few pieces of exercise equipment squirreled away where they can fit (not centralized at all, but at various locations we had adjustable free weights, a tread mill, 2 stationary bikes a rowing machine, and elliptical, and a heavy punching bag).