Slim, tall, and graceful, Mia is a fair and beautiful young woman. Spry and invigorated.

Magic user. Specializes in conjuration, but can branch to evocation and abjuration occasionally.

Enjoys greens, yellows, deep reds, and playful blues. Can often be seen wearing flashy, collared robes out to enjoy lunch with her friend. When on the clock, however, she thinks donning a chef hat is cute and often wears a low-cut apron/common cotton combo.

Great at brewing her own fruity ales, and cooking meals. Specializes in conjuration magicks.

Dreams to solve some of the mysteries of magic, such as where it comes from or how to make non-magical people magical. Her personal favorite mystery is to find the ultimate magic, if there is any.

Great at games and puzzles.

Hard to please. Hard to impress. Quick to dismiss people or ideas she finds uninventive.

Goes to bed very late, and therefore wakes up late.

Very good at making sure she stays clean and smells good, but has more of a sweet tooth than she cares to admit.

Respects the existence of the elven deity, but does not worship

Flirtatious in mannerisms, sway in walk, cut down side of skirt, low cut shirts, etc., but dismisses men constantly. Knows she’s pretty and flaunts it, makes it a hobby of turning men down. Great etiquette and professionalism at work, and relatively professional in recording research.

Likes bugs. Keeps a small atrium in her room, teaching the insects to live in harmony together regardless of species by trial and error.

Met in the merchant square while Fenwyse peddled some wares. Played some dragonchess together, Fen won, and so the bond formed. Whether enjoying nature or a drink together, they often find themselves in the other’s graces.

Mia calls Fenwyse Fen, but only Mia is allowed do that. 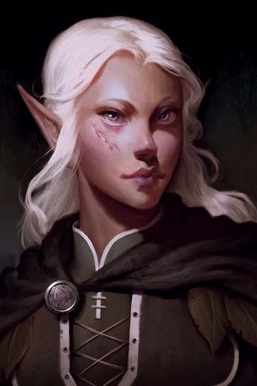