Halfling Circle of the Shepherd Druid

Coming from generations of artisans, Fenwyse grew up surrounded by various trinkets, jewelry, pottery, paintings, and other such pieces. Though she always found them beautiful, she never had the creative drive. She would periodically slip into the town square with a handful of her family's creations, pawning them off to the merchants who would make fairer coin. She had a knack for the conversation, knowing the history behind the items she was selling, always talking up the value of her wares.   At first, her parents urged her to take up an artisanal craft, but she continued to refuse. It caused some strife through her early teenage years, but when Fenwyse pawned one of her grandfather's paintings off to a family friend without realizing it, the buyer told her parents of her innate skill and eye for quality. Eventually, they offered to support her, giving her the wares she needed to start her own business.   After stagnating sales from tough competition and the loss of an employee who was slain while searching for materials, Fenwyse needed more time away from Wildcloak Wares to source higher-quality components for her family to utilize in their endeavors.

Owner and proprietor of the Wildcloak Wares stall in one of the town squares in Urthspyre. She currently has one employee, her younger brother, but seeks to expand again as soon as she can support multiple associates.   Torn between her desires, Fenwyse seeks to establish a proper shop for her family's artisanal crafts along with the trinkets and oddities she finds on her adventures, but also wants refuge from the bustle of city living. Perhaps her future holds an answer for both?

Six months ago, Fenwyse lost one of her employees to the harsh creatures who prowl the Hunting Grounds at night. Finding herself somewhere between distress and disdain, she took it upon herself to begin procuring her own material components, thus inserting herself into the world of adventure.

Zen Garden: The natural world is more peaceful than the constant noise and constructs of civilization, but the hustle and bustle is where I belong.

Highly protective of wildlife and fey creatures deemed unable to protect themselves. Scornful of those who hunt for sport instead of survival.

Met in the merchant square while Fenwyse peddled some wares. Played some dragonchess together, Fen won, and so the bond formed. Whether enjoying nature or a drink together, they often find themselves in the other’s graces.

Mia calls Fenwyse Fen, but only Mia is allowed do that. 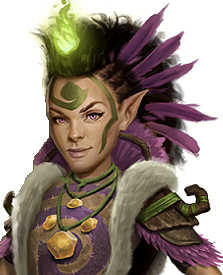