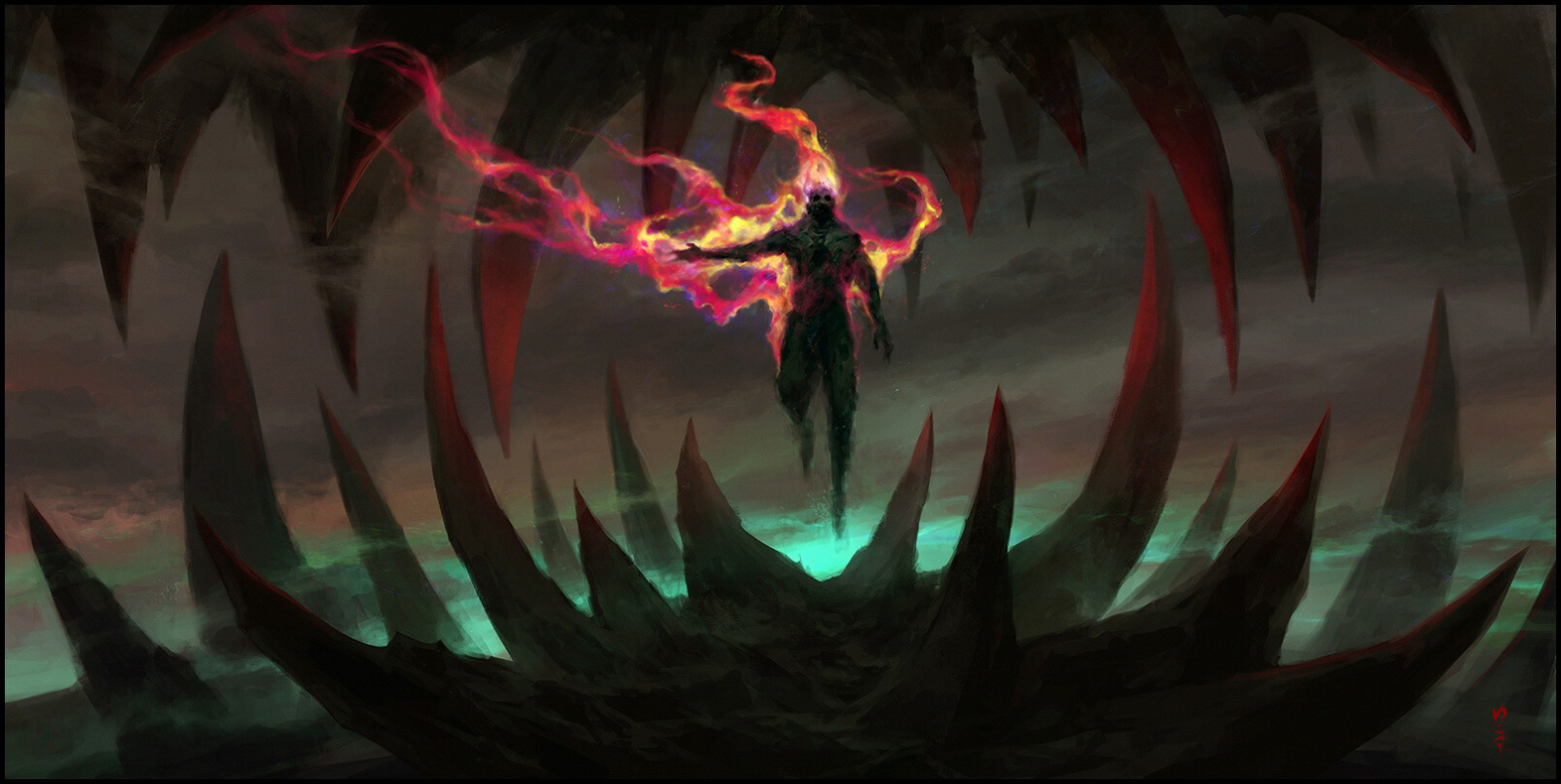 Pages of reddish-green skin. Letters of white blood. The Usra Kana tells of the worst of Human kin. And how he left the world to rot.
— Unknown

First among the Shamans. Creator of the Abyssal Arts. God of the Primordial Age. The Eternal King. A figure from the earliest myths of man. A tale of vanity, hubris and ambition ment to act as a warning. Sadly Humans seem all to keen on forgetting where their actions can lead them.

"...Among all the races brought down to the Mortal Plain, Humanity received the least. For the Gods denied them anything but the gift of life. A gift of pain and fear, fragile and often all too short. What the Gods saw as a way to limit mankind only served to ignite a fire in their very soul. Man fears and hates many things, but Death is their obsession, Immortality their ultimate goal. It is a dream they will chase for all eternity..."   "...In time, Mankind spread across the world, many of the Old Races falling in its wake...They had taken early to the Arcane Arts, calling those proficient in them Shamans. In a mockery of their creators, they called these Shamans Gods and worshipped them in great Temple Cities. It was in one of those magnificent cities that one of the most abominable examples of the Human Race would appear..."   "...No one knows his name anymore. Where he had come from. What his family had been like...But the Hunger must have been there from the beginning. The fire innate to all of Humanity, grown into a raging inferno in the depths of his blackened soul...Knowledge and fear were its fuel. Slowly but surely the Disease grew. Protected and nourished by those around it. Until it was too late..."

"...Tarakan was his first victim. All life in the city ceased. Only the monster remained. And hungered. City after city vanished, but scarcely anyone noticed. Times were crueller then and a few dead cities nothing to raise an alarm about...Finally, the monster appeared before Ascirei, the Pearl of the Old World. But it was not there to feast. For another desire, so utterly Human had grown within him...Ascirei knelt and soon its armies swarmed across the world...For what was immortality without anything to achieve with it...And with a Crown forged from Primordial Madness it crowned itself the Eternal King..."
Arcane Wound

"...It is said that the Eternal King was power itself. More God than Man, if what he had become could still be called that...But that was not what made him such an abominable being. Power was nothing special. Many a creature, be they Shaman, Fey or Yule has been called God in ages past. Even more, have tried to claim the title...But none were like the Eternal King. His mere presence brought madness. His gaze seemed to devour one's very soul...He was a dark pit. A festering wound. Nothingness made flesh eternally hungering for the essence of life itself..."
Abyssal Arts

"...His power was beyond monstrous, the King said to have obliterated armies and cities with mere thoughts. He raised the dead, made the living his puppets...he is even said to have escaped the throws of time...In doing so he broke the laws of creation itself and created a deranged, twisted form of the Arcane Arts...Some say that he drew his power from the Realms of the Dead itself. Why someone fearing Death would willingly bind themselves to it is anyone's guess...More likely that he dragged it from some dark abyss that even the Gods forgot..."
"...With Power beyond the realms of the sensible, the King set out to make himself an Empire. And like him, it was supposed to outlast even the Gods themselves. Eternal Empire it was henceforth known. Hubris befitting of a Human...no matter how monstrous he had become...And so the King wages war upon the Mortal Plain and many things were drawn into it...a savage and cruel war...some tend to call it the "War to End all Wars" which is fitting, for few things are still able to wage war now that it is concluded..."   "...Blood turned the oceans red. Corpse mountains rose across the land. Smoke from blazing lands blotted out the sun...It was a time of dark things, deranged beings of the cruellest and vilest kind...And among them the being that would eventually slay the Eternal King. A human of incredible power, able to command the Arcane unlike any of his kind...save for the King that was...And in a terrifying duel, he brought down the mad would-be deity. Ending his reign and the ancient age with it...

Addendum - Excerpt from "On the Oldest Text" by Master Anis Moaranon 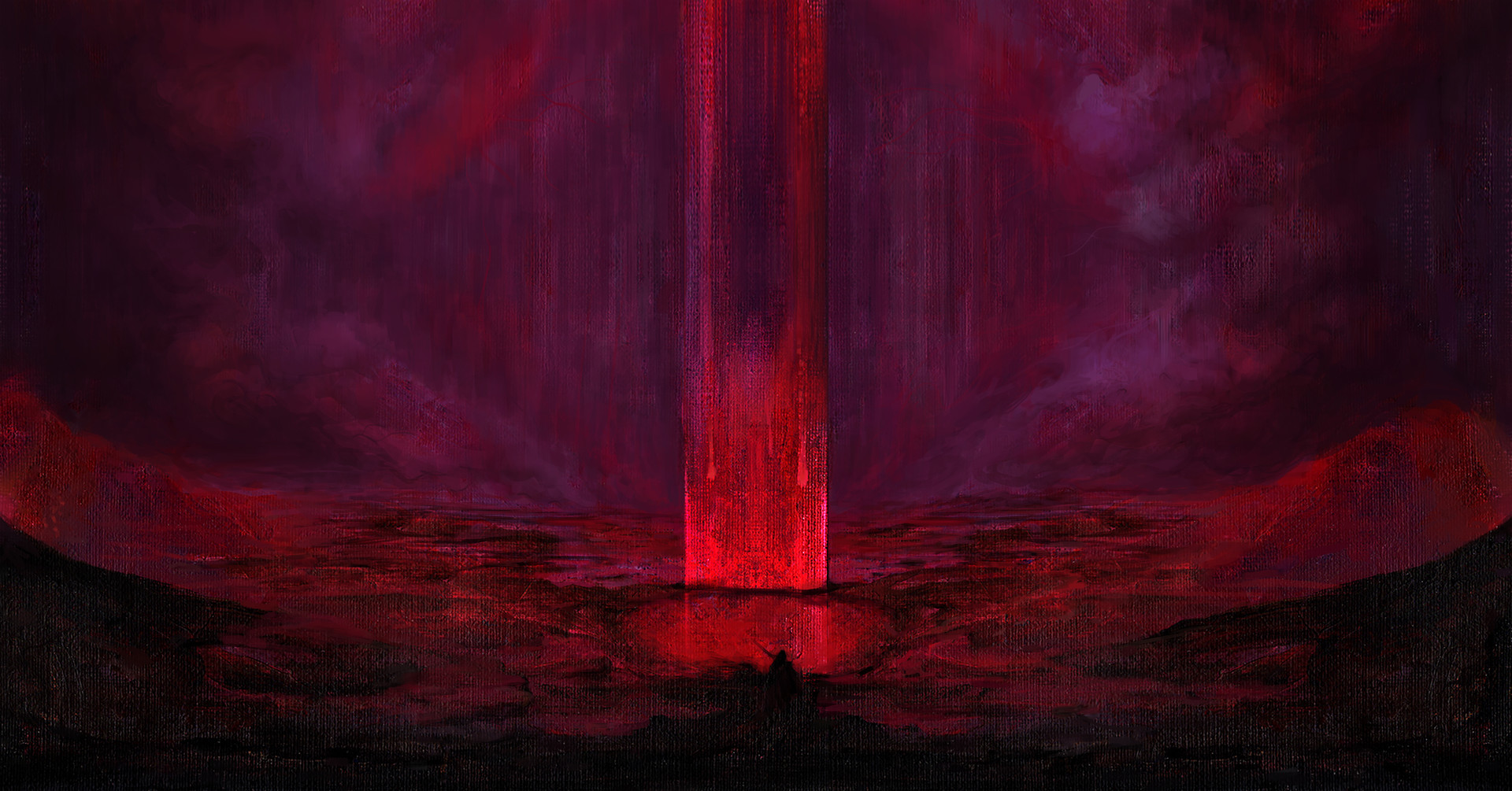 by Sverker Castillo
It is here that the Usra Kana ends, the fragmentary account cut off before it could come to what exactly happened at the end of the ancient world. Quite the exciting tale, if one were a young child that is. A certain group hails the Kana as a sort of holy book, a window into the world of old. But in truth, it is nothing more than a fairy tale. A scripture containing a people's myths, bound in one of the few pockets from which civilization would ultimately emerge.   Some claim that the figure which ended the "Eternal King" was none other than the mythical first Archamge. Although the emergence of other Archmages has lent credence to the theory that other such entities may have existed in ages past, it is still very much in doubt if any such "First Archmage" has ever walked the earth. Myths and tales abound and few exist without larger than life heroes. The Kana itself is made from strange materials and indeed the oldest scripture in existence. But it offers nothing but more fairy tales...the Eternal King nothing more than another villain to scare children.

Cities, Empires, Heroes, Tyrants, Gods...makes for a nice story. But we shouldn't waste our time with tales used to lull children to sleep. Our kind has long since left the realms of the fairy tales. A Mage should not deal in fantasy.
— Grandmaster Aleon of the Hierarchy 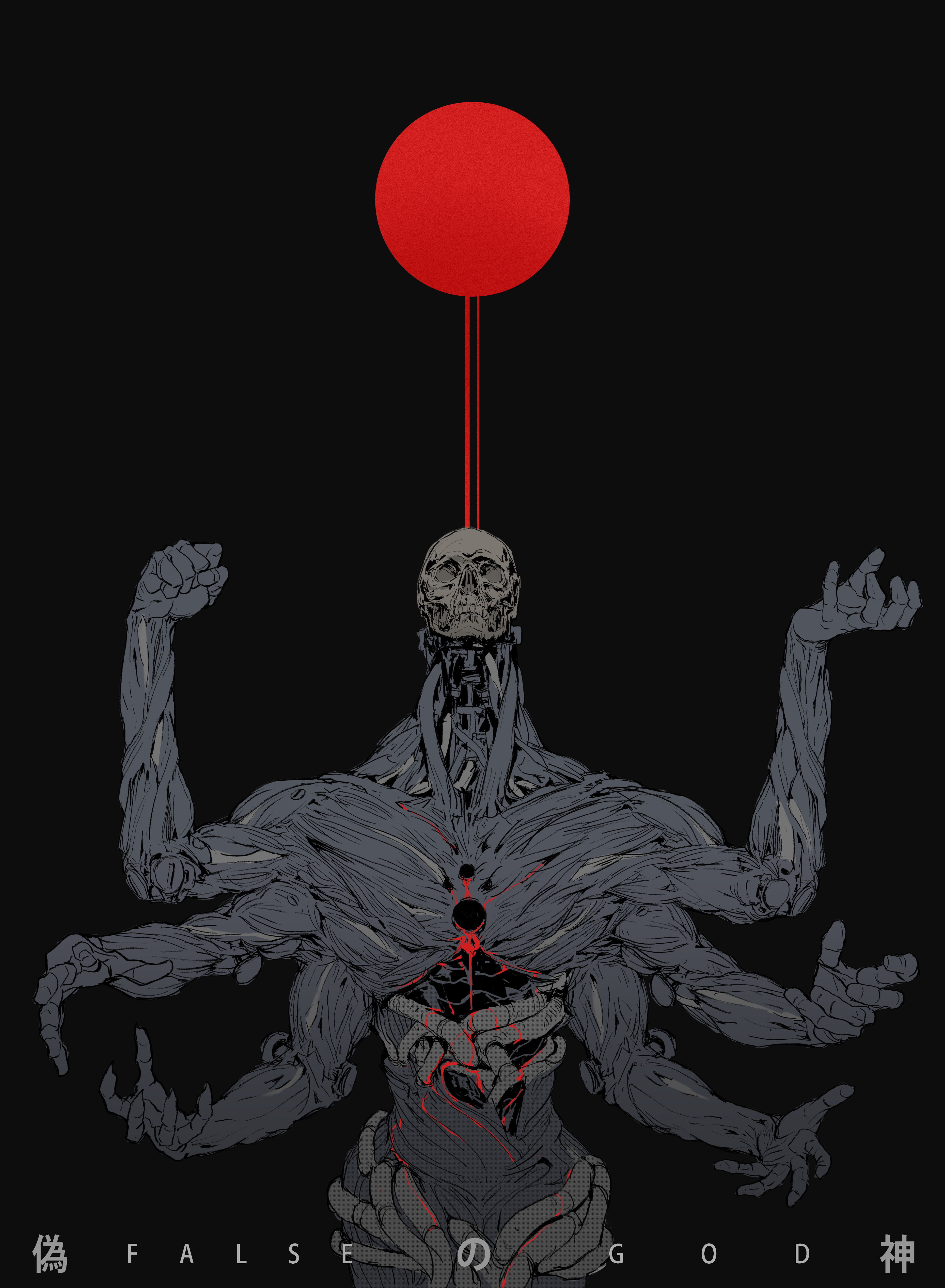 Ethnicity
Primordial Humanity
Age
Uknown
Date of Birth
Unknown
Circumstances of Death
Slain by the First Archamge
Children
Addendum II - Eternal Empire   A realm that according to the Kana once held sway over much of the world and waged war on a massive scale. Like its ruler, this is nothing but a fabrication. Some tribe using the memories of mass migration and retelling it as some grand war for the fate of the world, all to raise their prestige most likely. Fact is that Humanity simply wasn't on a level required to form large scale organizations, full on "states" emerging over 500 years later under the first Shamans.   Addendum III - Crown of the Eternal King   Often named in connection with the ancient villain, this crown is supposed to act as a sort of anchor for his spirit, keeping it on the Mortal Plain and slowly restoring his strength. Artefacts, including crowns of various sizes, that appear to harm the wearer do exist. However, each of them can be traced back to Rouge Mages, be they Necromancer or petty criminal. And none of them possess anywhere near the fantastical abilities attributed to the Eternal Crown. 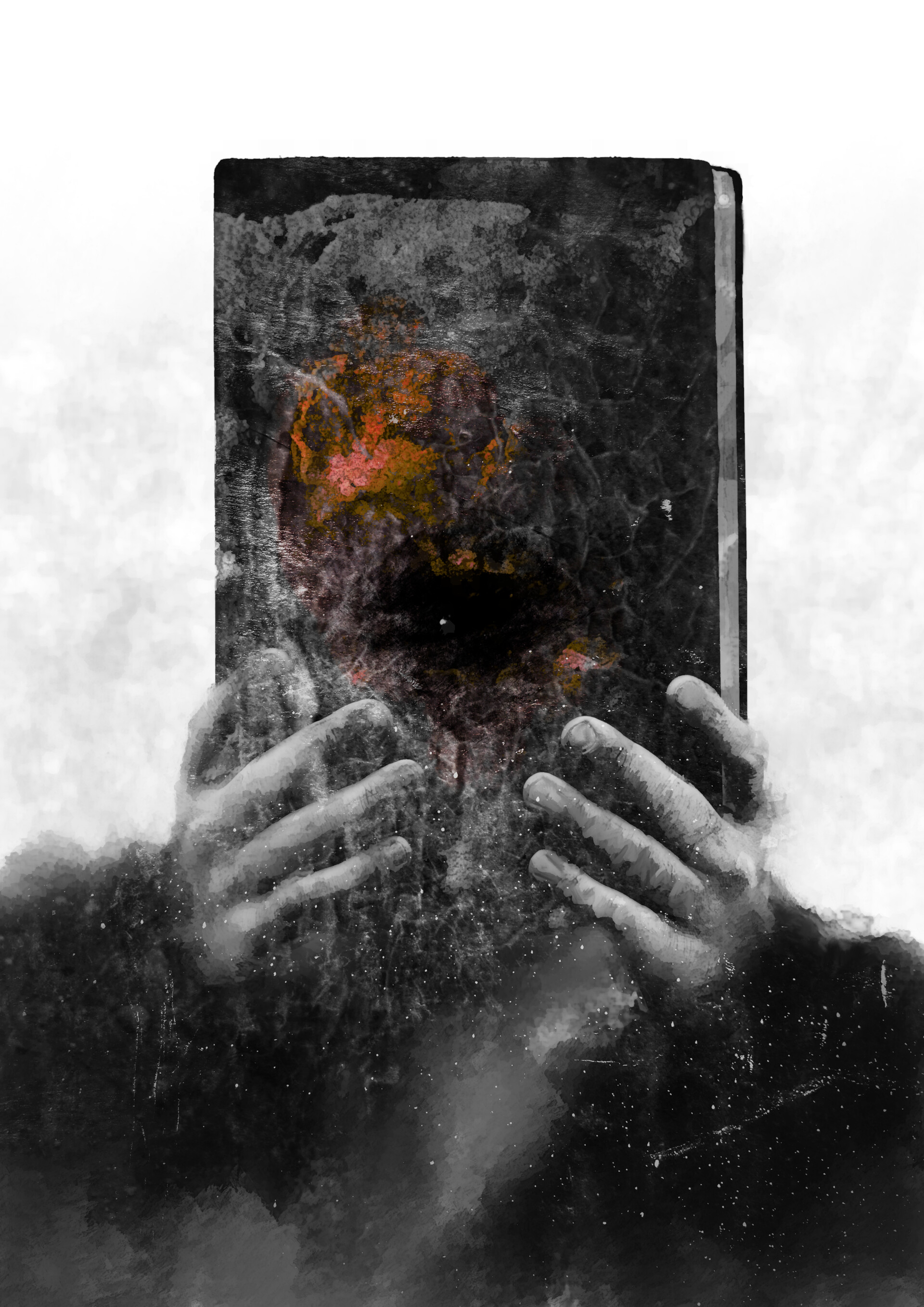 Remove these ads. Join the Worldbuilders Guild
The Villains

I love how you've done this article mostly through a bunch of extracts. It makes the figure of the Eternal King rather more mysterious. Is he real? Isn't he? No one really knows.