"Can't see much with this mist, cap'n," the helmsman complained to Captain Sharpes.   "It'll burn off now that the sun's out, Spooks," Captain Sharpes told his nervous helmsman as he pointed to the bright spot in the thin veil of mist surrounding them.   "Don't like not seeing clear." Spooks persisted. "This part of the river's tricky on clear days." He scowled at the mist. "There's tales of wickedly things happening in the mist."   Captain Sharpes rolled his eyes. If he wasn't such a master Darkwater helmsman, he'd have gotten rid of him. Probably chained to an anchor.   "We're not going back to the main channel." Captain Sharpes told him. "The Miri Marines're watching for us."   "I don't know, cap'n." The helmsman whined.   Captain Sharpes took a deep breath, held it, and let it out slow. He said nothing more though his hand twitched towards the cutlass sheathed at his belt.
— from Garzio-Indar:Darkwater page 3 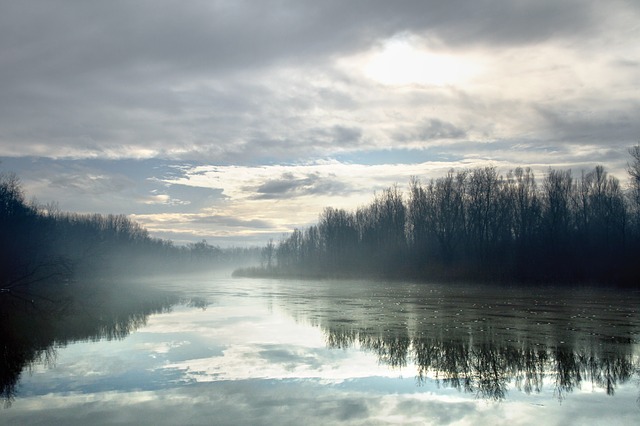 Broken Keel Bend by laszlo zacharias
Having gotten in that defiant complaint, Spooks kept quiet, his eyes peering hard at the water ahead. There was a strange sound of rippling water faintly splashing against the hull."Wh-what's that?" He squeaked.   "Aint noth--" Captain Sharpes started to answer then stopped as the bow of his two masted river ship, River Dart, started to turn towards the nearest riverbank.   "Spooks!" He yelled even as the nervous helmsman was already turning the ship's wheel hard to port.   "Hands to oars!" Captain Sharpes shouted, then swore as he realized there was no time for his crew to get out their oars. "Belay that! Poles to starboard!"   The crew got their poles out and tried to push the River Dart away from the rocks they could now see before the riverbank. They managed to slow the ship enough so that it rode up onto the rocks rather than smashing into them. From the shore there came long, screeching laughter. Shapes moved in the mist between the trees on the bank.   "Repel boarders!" Captain Sharpes ordered and drew his cutlass.   With shaking hands, Spooks drew his cutlass and put his back to the helm.   "Gods perserve us from wickedly things," he prayed aloud. For once, Captain Sharpes agreed with Spooks as he stared at the misshapen things splashing towards his ship. And then, the first of the things jumped aboard the River Dart.

Broken Keel Bend is a long lazy turn on the Darkwater River. Darkwater is a wide river that runs deep providing a major thoroughfare through the Miribex Kingdom. This bend is wide and the water flows between several long narrow ridge shaped islands forming many channels. Though the bend is lazy, the current is not. There are sudden rapids, swirling eddies, and shifting sandbars that hide sunken logs just waiting to pierce the hull of a boat. Unless a day starts sunny and bright, the mists of Broken Keel Bend hide its dangers. From fishing boats to river ships, those who wander into Broken Keel Bend risk losing their boats and sometimes their lives.   The Miri Marines patrol the main channels of Darkwater River that runs the length of the Miribex Kingdom on the look out for pirates. Broken Keel Bend is risked by smugglers and pirates trying to avoid the marines. Fishermen dare to fish Broken Keel Bend only when there is no mist. 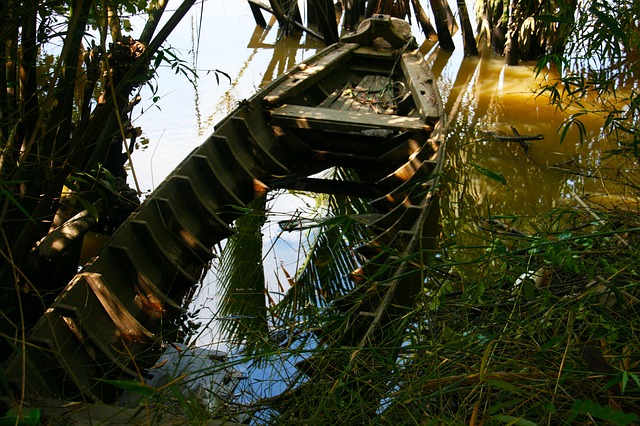 Sunken Boat by Dean Moriarty
In a seedy tavern called Twisted Tam in the town of Honey Port there is a very nervous riverman who shivers as he drinks his watered down ale. For a few coins and another drink, he tells a most haunting tale of Broken Keel Bend.

" ... I-I fought beside Cap'n Sharpes there a-at the helm 'til one of them struck me o-overboard onto the rocks." The quavering man put down his tankard and rubbed his crockedly healed left arm.   "Broke my arm hitting the rocks. The screaming from the deck was terrible a-and that wickedly laughter came closer." He gulped down half his ale. "I ran the rocks to shore then ran a-and ran. Something crashed through the woods after me. I r-ran out of the mist a-and it stopped. I-it didn't leave the mist, just howled a-and raged at me afore going back. I-I waited a-and waited but no one else came out of the mist."   The quavering man finished his ale.   "I-I followed the river here. Hoping someone'll return from the River Dart. None has. A-and neither has the River Dart. M-must still be sitting up on them rocks."
— Spooks, a helmsman too terrified to return to sailing on the Darkwaters