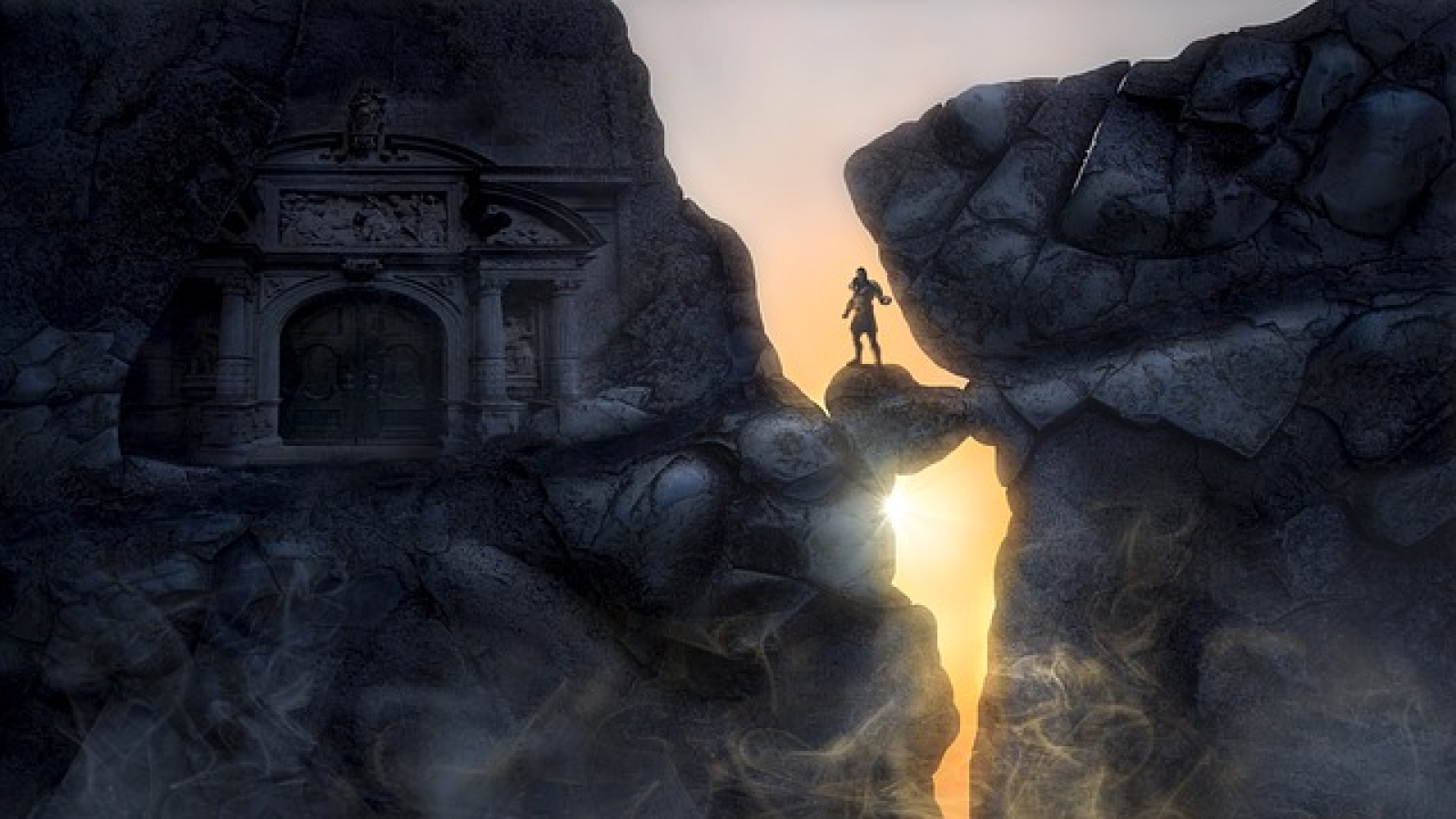 His staff was a blur as he deflected the crossbow bolts streaking at him from the cultists.   The acolyte sprang over the gate and into the courtyard.   With no hesitation, he threw himself into their massed ranks, knocking their blows aside and sending them reeling, until he stood alone.   Taking a deep breath, he settled himself into a battle stance. 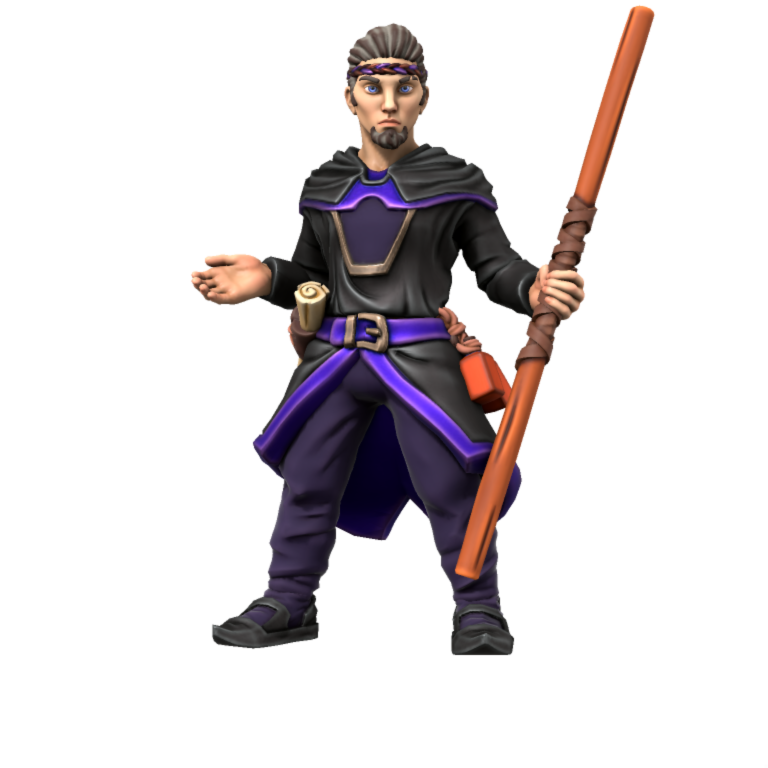 The cultists got back up and some charged him.   Fire sprang to life on his staff then slithered and coiled like a snake about it, waiting to strike. The first cultist reached him. A quick kick merged with hissing flames from the staff knocked the cultist back to the ground, screaming from burns. The other charging cultists slid to a stop.   The acolyte simply waited, and smiled.

Who Are The Acolytes?

The Acolytes of Boki are monks dedicated to Boki, goddess of secrets. They believe it is their duty to protect mankind, and sometimes the world, from terrible magics. They have no one leader. Instead, the Abbots of their two monasteries, Old Fane and Appelkamp, come together to make decisions. These decisions affect all acolytes, not just those within their respective monasteries. On rare occassions when they cannot agree, the leader of the Brethren, a secretive order within the acolytes who wander the world, is called in to help decide.   An acolyte begins as a petitioner who studies the primaries in hopes of doing well enough in the Dawn Trials to be accepted as a novitiate.   Once a petitioner becomes a novitiate, their training in bringing harmony between mind, body, and soul is added to their other studies. These studies are in scriptures, academics, and the fundamentals of magic.   A novitiate must pass the Trials of Enlightenment to become an acolyte. These are grueling trials and can take many years and several attempts before they are passed.   More arduous than the Trials of Enlightenment are the Great Trials and an Acolyte must pass them to become a master.   Any further ranks within the acolytes are for the purposes of guiding the way of the acolytes and running their monasteries. These positions are given the rank of Grand Master and are all chosen from those who have become masters. The highest positions are those of the two abbots and that of the leader of the mysterious Brethren.

Origin of the Acolytes

The Flying Ship of Boki

Boki spread the knowledge of magic, stolen from another god, to those who were not giantkin. This was during the time of the Hrokentorm Empire, an empire of magical giants who once ruled all the world with a ruthless hand and savage magic. It was during their rule that the art of Golem Craft came to be. 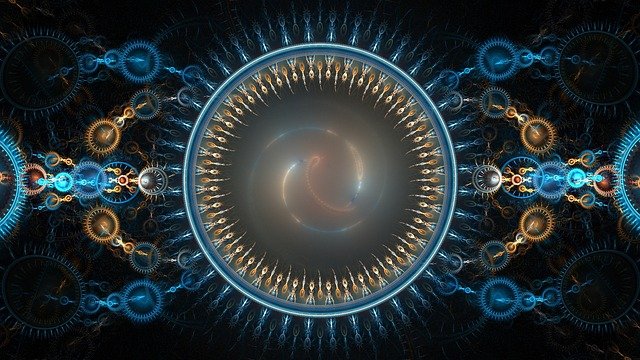 The Gears by AzDude
As the golems became more numerous, and powerful, they were turned into war engines.   Battered wrecks and scraps could be found everywhere.   From these scraps, Boki crafted herself a flying ship. 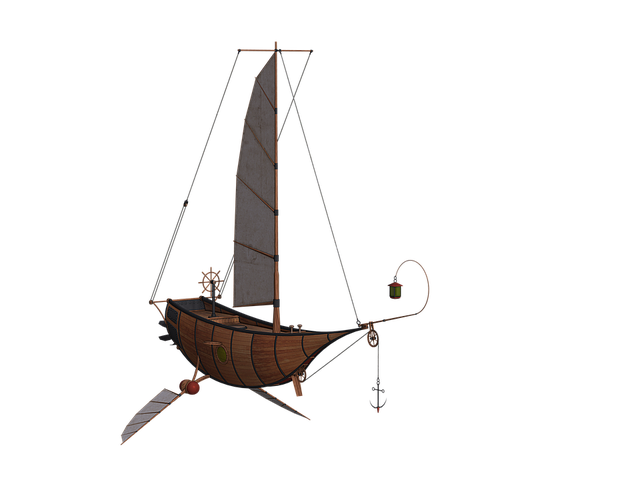 Boki's Ship by susannp4
All of this she did mostly by mortal means as she had to hide her true self by supressing her powers so no other god would know she was defying The Rule of Godsheim.   Once she completed her ship, she named it "Desh Honka", an Auldewyrm, the First Tongue name meaning "Gray Goose", as the ship could sail on water or in the sky. She then gathered a crew of loyal and devoted humans, gifting each of them a headband of braided leather blessed by her. These minor blessings granted them courage, insight, and tolerance for all climates.   Every voyage meant soaring unnoticed past the cloud cities of the Hrokentorm. Being found by the war golems or Hrokentorm magics would have meant certain destruction.   For three human generations she sailed the world, before taking apart her ship. She scattered the mortal pieces about the world and retreated back to Godsheim.


When she left, her crew remained in her hidden mountain top temple.   She never gave it a name, saying that if it had no name it could not be scried for. 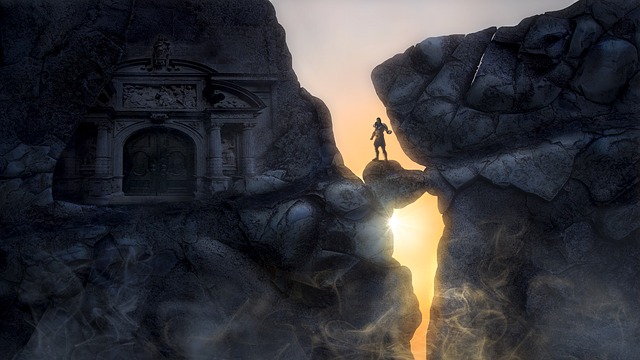 Old Fane by KELLEPICS
Over time, they stopped thinking of themselves as Boki's crew and started to call themselves Acolytes of Boki.   They even gave the temple a name: Old Fane.
Old Fane was built into a mountain top in such a way as to be unseen and under sized for giantkin. It is as much a fortress as a temple with enough solid mountain around it to withstand an attack. The path up to Old Fane was made just wide enough for a man to lead a sure-footed donkey along it to prevent giantkin from marching up to it.   The acolytes have since named this path the Long Steep. Their loose-fitting garb is perfect for the Long Steep as it allows the acolytes a full range of motion should they slip on fog dampened rock or need to dodge a loose falling stone.   Still felt driven to carry on the work they had done with Boki, the acolytes took it upon themselves to ensure those who had magic used it according to Her teachings. Even today, those who go the way of the Hrokentorm, by using their magic in terrible ways, are hunted down.

Expanding Of The Acolytes

As the numbers of acolytes grew, so did their need for greater amounts of supplies. This led to the acolytes building a landing on the Darkwater River, shortening the distance their trains of pack donkeys had to travel overland. Over time, this landing was built up into a monastery they named Appelkamp. At first, it was a place for masters to study in between supply runs. Eventually they, too, began to train acolytes.

Appelkamp Monastery by BlackDog1966
Originally built as a landing on the Darkwater River, the Appelkamp Monastery was dug into the stone bluff of the riverbank in the same manner that Old Fane had been built into a mountain top.   A small rock harbor was built to make it easier for river boats to land but it's still not the easiest place to land.   Despite its small outwardly appearance, Appelkamp Monastery is best known for the library in the catacombs beneath it.
The Darkwater River runs the length of the Miribex Kingdom and is a major trade route. Being on the Darkwater brought the attention of the Allgods Temple, which controls all religion within Miribex. Unlike Old Fane, which was safely distanced on its mountain top, Appelkamp was forced to join the Allgods Temple and bow to its rules.   Appelkamp not only had to register with the Allgods Temple, they had to pass along a full quarter of their tithes to the Temple. The most visible change the Allgods Temple demanded was for the acolytes to change their garb to something much less ... rustic. After weeks of debate between Appelkamp and Old Fane, a new style for the Garb of the Acolytes was created.

One hundred seventy years ago, there was an Appelkamp master named Sainted Father Duno Deerwest who began the Brethren. He taught them to carry out very secret work. Since The End Of Instant, the Brethren have taken to watching out for magic users organized into consortiums and covens who plot to do great terrible magics. The Acolyte numbers are too few to be able to directly confront these groups, but the Brethren are masters at spying and sabatoge in secret.   The Brethren are all Appelkamp members, though some of them were never trained in Appelkamp or even in Old Fane. Instead, they are often trained in the master-to-apprentice style to maintain their secrecy to the rest of the world. Being of such a secretive order, the Brethren only wear their Appelkamp garb when there is need, like formal meetings at an Allgods Temple or the special sevices at Appelkamp or Old Fane.   The masters of the Brethren live as shopkeepers with cellars that are more than just storehouses, or as traveling merchants who do more than sell wares during their journeys.
DND 5e GAME STATS

An Acolyte of Boki is like all other monks as they carefully study the magic of life within their own bodies called ki. Harnessing this power, they create magical affects used in combat as well as for other situations. Boki is the goddess of secrets and it is because of her determination to remove all demons from the world that her acolytes must learn some magic.   Acolytes study within the temple called Old Fane or the Appelkamp Monastery. Both are in the kingdom of Mirabex where they are trained to the dangers of demons and how to fight them. They are expected to leave the monastery to deal with demons and help those who need it. Their adventures are also seen as personal tests of their physical and spiritual growth. Acolytes are driven to accomplish their great mission but are not above the temptations of fortune and glory. Resisting these temptations are often a struggle despite their mission resting soul-deep within them.
Acolytes of Boki learn to speak Auldewyrm and to read/write Dracoglyphics.   Dexterity is the most important ability score, followed by Wisdom.   The most common backgrounds are Acolyte (flavored towards monk and not cleric) or Hermit (due to reclusive upbringing in the Appelkamp Monastery).
hit dice: 1d8 per monk level
hit points at 1st level: 8 + Constitution modifier
hit points at higher levels: 1d8 (5) + Constitution modifier
armor proficiencies: Slicker and Gambeson ONLY
weapon proficiencies: Ah (Dart), Vi'ing (Hand Axe), Ven (Short Sword), Ga'ar (Light Hammer)
tools: Choose one type of artisan tools or one musical instrument
saving throws: Strength, Dexterity
skills: Choose two from Acrobatics, Athletics, History, Insight, Religion, and Stealth
starting equipment:
Start with the following equipment in addition to the equipment granted by chosen the background:

Answering: "a religious order founded or based in your world's history"
Visit Dazzlinkat's Competition Page Check all other answers to this prompt Competition Homepage