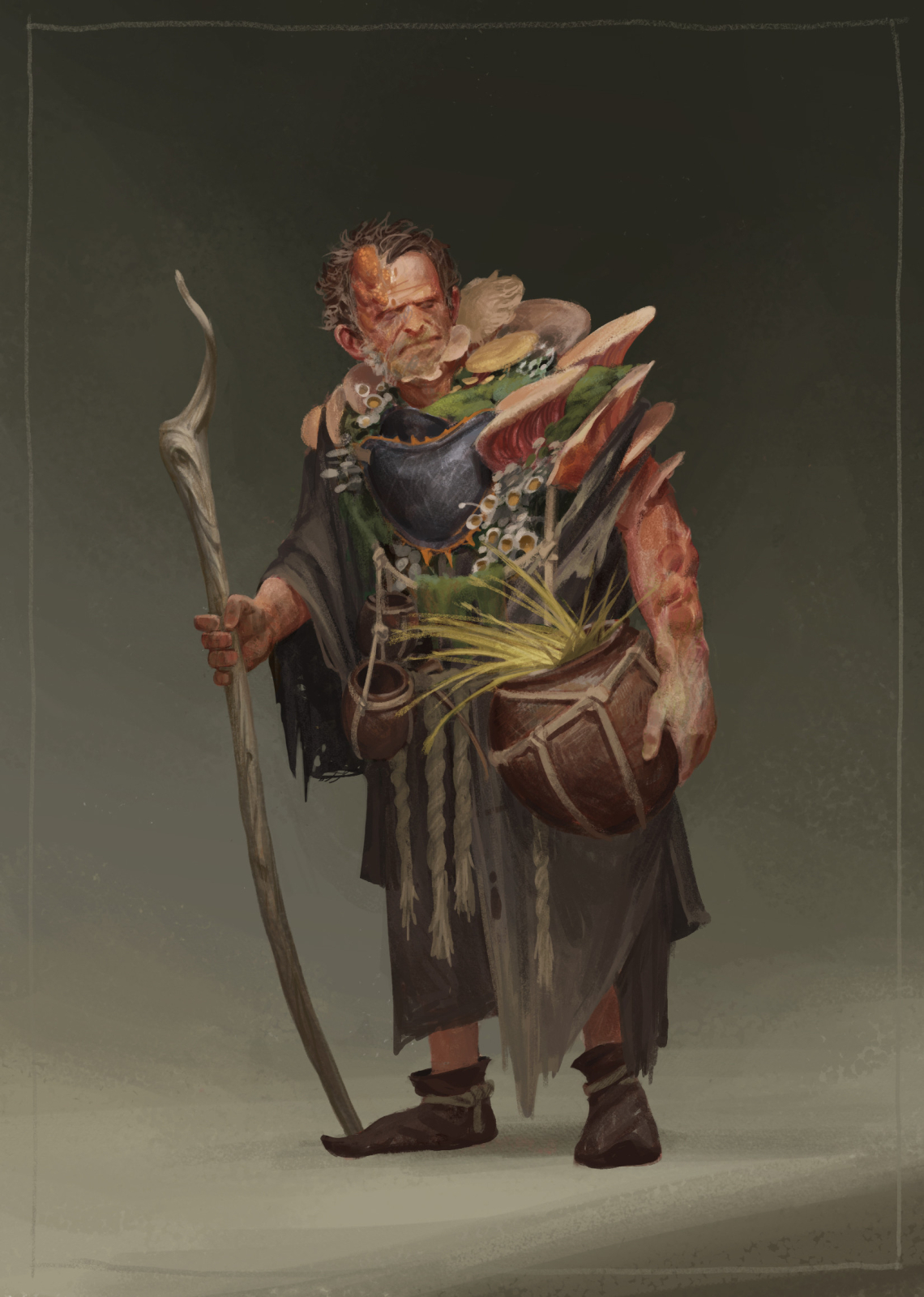 When the Great Crater was created and so much of Ozerran shaken and lost all on an instant, spores erupted into the atmosphere, gathering quickly into a thick and dangerous cloud. Those who found themselves in the explosion of course perished, but even those who found themselves miles from the catastrophe were deeply impacted, changed forever. It was quickly discovered that should a creature inhale these spores, they would become host to a parasitic fungus, which took their body over from the inside out. The very nature of their minds and memories were changed, and began to reflect the worldview and lifestyle of another fungal humanoid: Myconids. These sentient fungi that used to live primarily in the depths of The Underdark live peaceful and usually pacifistic lives, defending themselves only when necessary, and developed biological defenses to stun and incapacitate their targets rather than outright destroy them. The Accepted were named by the Myconids, as these infected humanoids were seen to have been "accepted" by these spores into the same way of living that they uphold. As such, some Accepted who had lost limbs found them grown back, but in fungal growths rather than their usual flesh and blood. Not all changes were purely physical, some Accepted forgot whole swaths of their previous life, lost the ability to remember or value the importance of names, and most lost hostile and aggressive temperaments they held before.

Those who lived in nearby settlements and towns that found themselves under the spore cloud, returned to their respective homes, whether it was located within the Fungal Badlands or not. Ironically, only a small number of these newly Accepted were accepted back into their previous lives or homes, their loved ones appalled at the "grotesque" physical transformations or change in mental states. Many Accepted never even returned to their homes, completely forgetting they ever lived there, lost in a world drastically different than the one they remember. In addition, the Accepted have the capability to transform other humanoids by force. This of course was immediately deemed a danger, but by the time it had been realized, the returning people had already infected two to three more individuals. In many large communities, such as Coghaven The Accepted were forced into neighborhoods where they could do not harm to the rest of the population, and slums were formed. Most of those who remain uninfected by the accepting spores see these people as dangers to society, their practices strange, alien, and even threatening, likening them to zombies or ghouls. In truth, they do hold an ounce of natural necromantic energy, keeping them alive and restoring missing limbs.   Many Accepted have settled into their new lifestyle, yet there are those who see this new way of living in peace as essential to avoiding mass catastrophe in the future. So much so that they view a forceful transition to everyone being Accepted as the only true progress, and the racial unrest fuels this ideal. The Great Circle is an organization that has only recently popped up in the slums of Coghaven, they claim that the governing authorities don't care for them in the slightest, and would have them destroyed at the drop of a hat. A not-insignificant amount of people have begun to side with this way of thinking, but still there are those who aim to impact their community in a way that educates safe practices among The Accepted, and teaches through meditation and discipline to control this powerful ability and use it only in dire situations.

If you would like to play an Accepted character, refer to these rules below for your abilities and features. Accepted are a new race in the world, and have yet to be fully studied or understood. They have not been observed to either die of old age, or have the ability to reproduce, and so every Accepted has a previous life before becoming Accepted. The concept for this lineage or any like it is outlined in D&D 5e books such as Tasha's Cauldron of Everything and Van Richten's Guide to Ravenloft. With this in mind, it's possible to either become Accepted mid-adventure, or to start your adventure with the transformation having already taken place.

You have the following racial traits.   Dual Creature Types. You are both a Humanoid and Plant.   Size. You are Medium or Small. You choose when you gain this lineage.   Speed. Your walking speed is 25 feet.   Ancestral Legacy. If you replace a race with this lineage, you can keep the following elements of that race: any skill proficiencies you gained from it, and any climbing, flying, or swimming speed you gained from it. If you don't keep any of those elements or you choose this lineage at character creation, you gain proficiency in two skills of your choice.   In addition, the following races are impervious to the accepting spores, and therefore cannot become Accepted: Genasi, Warforge, and Autognome.   Superior Darkvision. You prefer the dark, and may even be nocturnal. Your eyes have adjusted to be at home even in the caverns of The Underdark. You can see in dim light within 120 feet as if it were bright light and in darkness as if it were dim light. You discern colors in that darkness as shades of gray.   Fungal Nature. You don't need to eat conventional food, but must absorb nutrients through dirt while taking a long rest, or through various forms of plant matter. You also have advantage on saving throws against being poisoned, and resistance to poison damage.   Innate Telepathy. Just as the Myconids you have come to resemble in so many ways, you have access to a semblance of telepathic communication. You gain access to the Message cantrip and can cast it without supplying any spell components. (Including Verbal, meaning the communication happens purely within the minds of you and your target.)   Eruption of Spores. You are surrounded within and without by millions of tiny spores. Your kinship with fungi gives you the ability to wield these spores as you see fit. Choose one of the following: You may use your Eruption of Spores feature a number of times equal to your proficiency bonus, regaining any expended uses at the end of a Long Rest. The Save DC is equal to 8 + your proficiency bonus + your Intelligence, Wisdom, or Charisma modifier (you choose when you gain this lineage). You may choose to switch between Pacifying Spores and Accepting Spores at every new level.   Imperfect Grafting. Your humanoid flesh and fungal flesh cannot perfectly meld, and are sensitive to strong vibrations. This manifests in the following ways. This is playtest material and by no means perfectly balanced, please email me at [email protected] with your opinions or suggestions to further balance The Accepted race.

Answering: "Α species that survives in an unlikely place"
Visit A Funguy's Competition Page Check all other answers to this prompt Competition Homepage