The vast, snowy hinterland of the Sekorra Forest covers nearly 4,500(km^2), or more than a million acres. It surrounds the towering northern mounts of the Irondust Mountains, and embroiders both the Daguna, and Gayatahi Rivers. The Sekorra was an extremely remote region of the Odegon Frontier until the arrival of the Blackhound Railroad from the eastern provinces of Drin, but now the cities of Silver Springs, Korros Station, and Mithria Nox can be found within the southern edges of its borders. The arrival of outsiders, and the houses of Odegon in the region pushed out the native Woad Elves of the Sekorra who belonged to the Wapalli tribe. 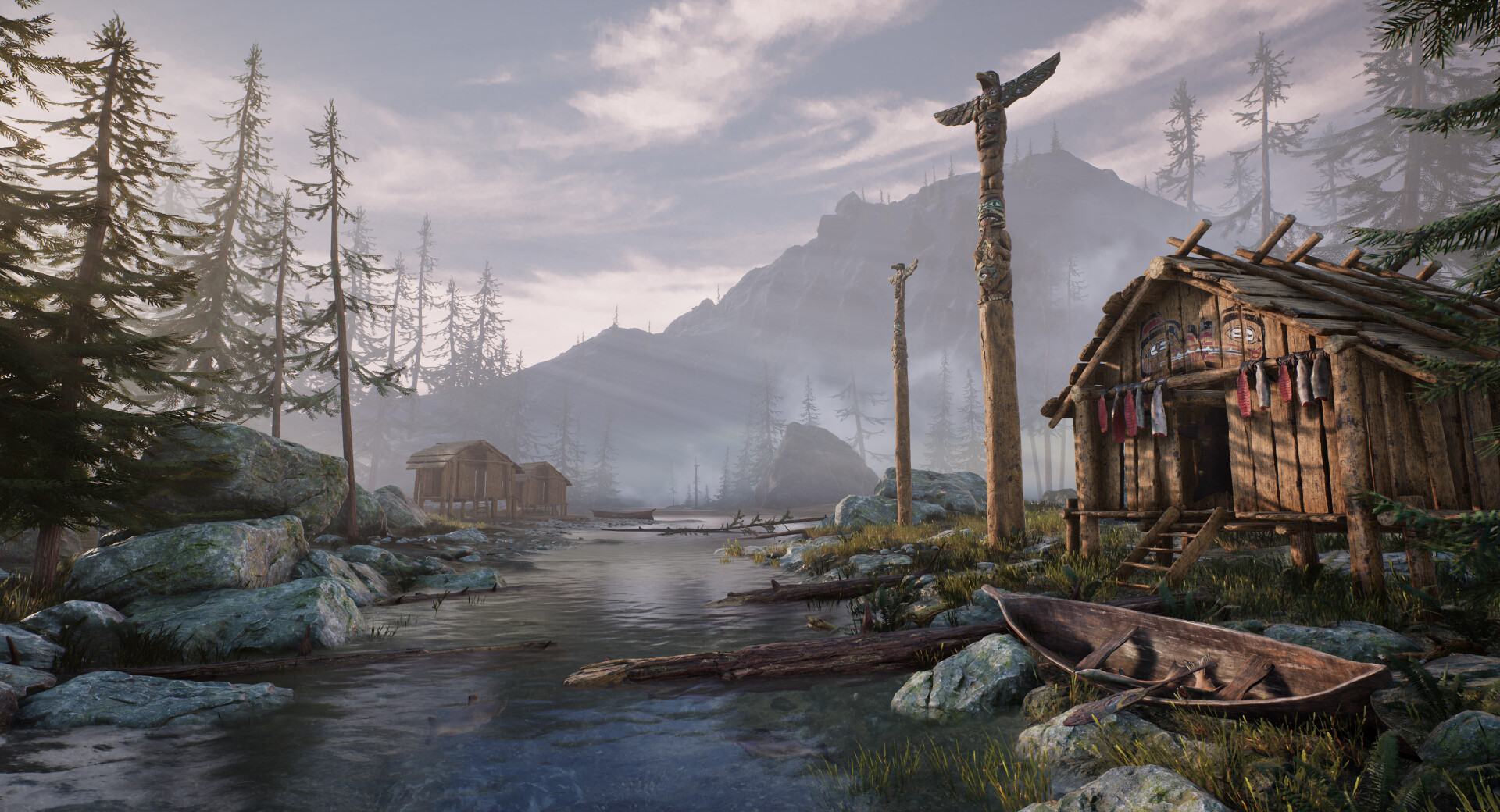 Enviromental: Pacific Northwest Fishing Village by Patrick Ward
Like many tribes, and clans of Woad Elves throughout the world of Orr, the Wapalli left the lands of Dalair and arrived in what would become the Odegon Frontier during the Magium Olypon era (1st age). They settled in the Sekorra forest and built their villages upon the rivers and streams that rushed into the shining lakes of the Odegon. These rivers provided much of the Wapalli's livilihood and needs and became a central part of their society. While they did hunt among the cold timber of the Sekorra, this was mostly to gather pelts and skins for their clothing and homes. Since being driven further north, away from their native lands, the Wapalli have been forced to adapt to their new circumstances. Stubbornly refusing the help of outsiders, and remaining especially distrustful of the steam machines of Drin, the Wapalli forsake the use of firearms and other 'modern' conveniences that have arrived with the Dwarven houses of Odegon, and the Black Hound Railroad. Their camps and tribal lands are kept hidden from the outside world, sometimes with grand arts of illusionary magic, or the primeval weave of the forest itself. The Wapalli were always a hostile force during the foundation of the Odegon Frontier (for good reason), but their communities have become ever more wary and aggresive in recent centuries, to the point that travelers and caravans have learned to simply shoot on sight at their approach.   The Wapalli practice a form of ancestor worship where their dead are entombed through druidic magic within the trunks of the trees of the Sekkora. These living coffins are often marked by the Wapalli with large totem markers baring the symbols and heraldry of the family of which the groves of trees belong. Travelers, and hunters within the Sekorra know to avoid these sanctuaries, and often speak of feeling 'watched' when approaching them.

The Wapalli warriors practice a number of magical, and alchemical arts, which combined with their vast knowledge of the Sekorra itself makes them a deadly foe to engage among the tall pines of the timberland. Wapalli warriors, called Wildshapers, practice the druidic art to shapeshift into beasts, often prefering the forms of mountain lions, bears, wolves, and other predators. Their alchemists also have extensive knowledge of many deadly poisons that can be derived from naturally growing flora within the forest itself, poisons which are used to coat their arrowheads, and often cause paralysis or damage to the target's nervous system. Some groups of wildshapers keep watch among the frontiers of the Wapalli tribal lands, and burial sites; often summoning blizzards and thunderstorms to ward off (or kill) those who enter into their seclusive realms. 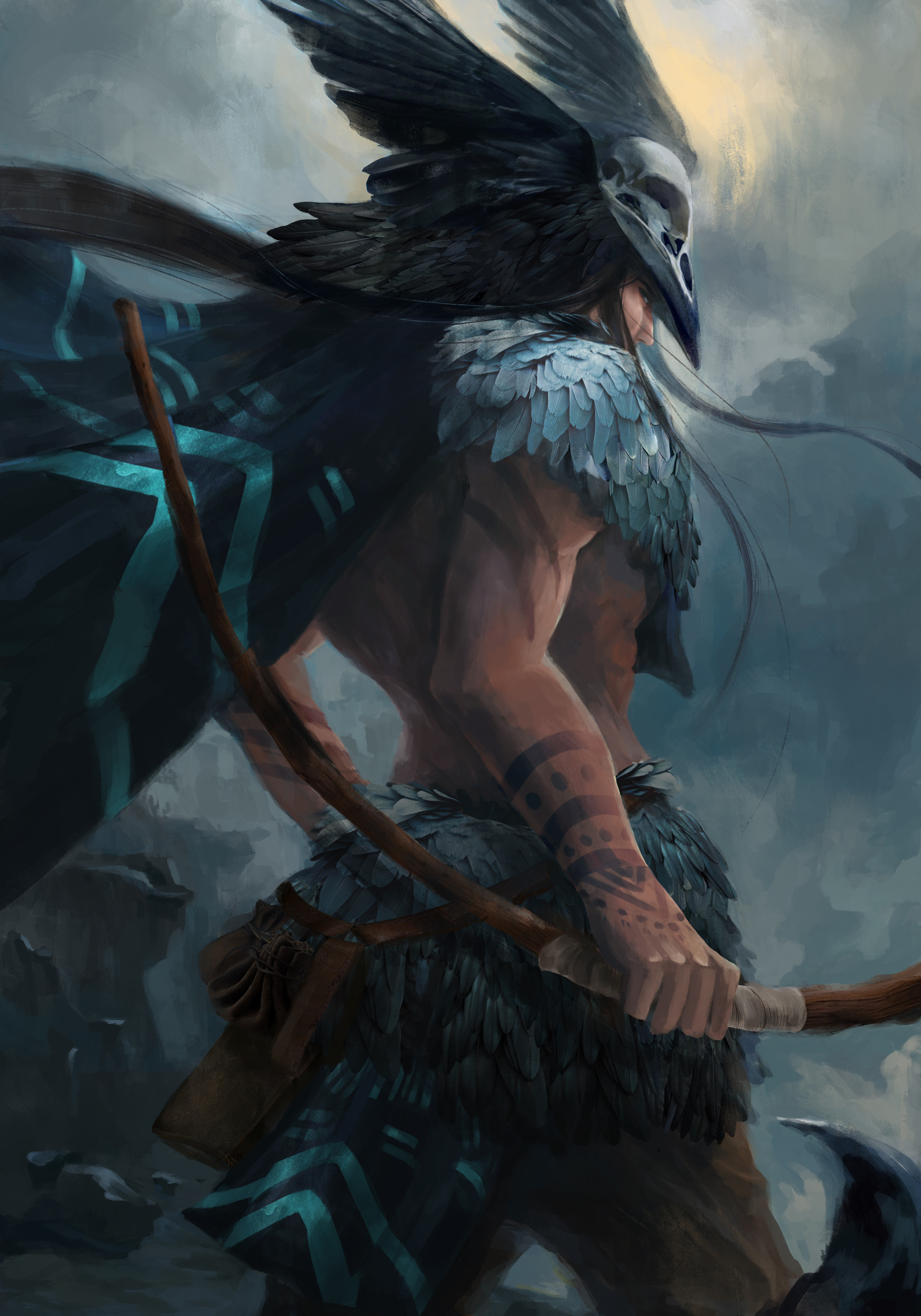 Before War by Jia Yi Teh 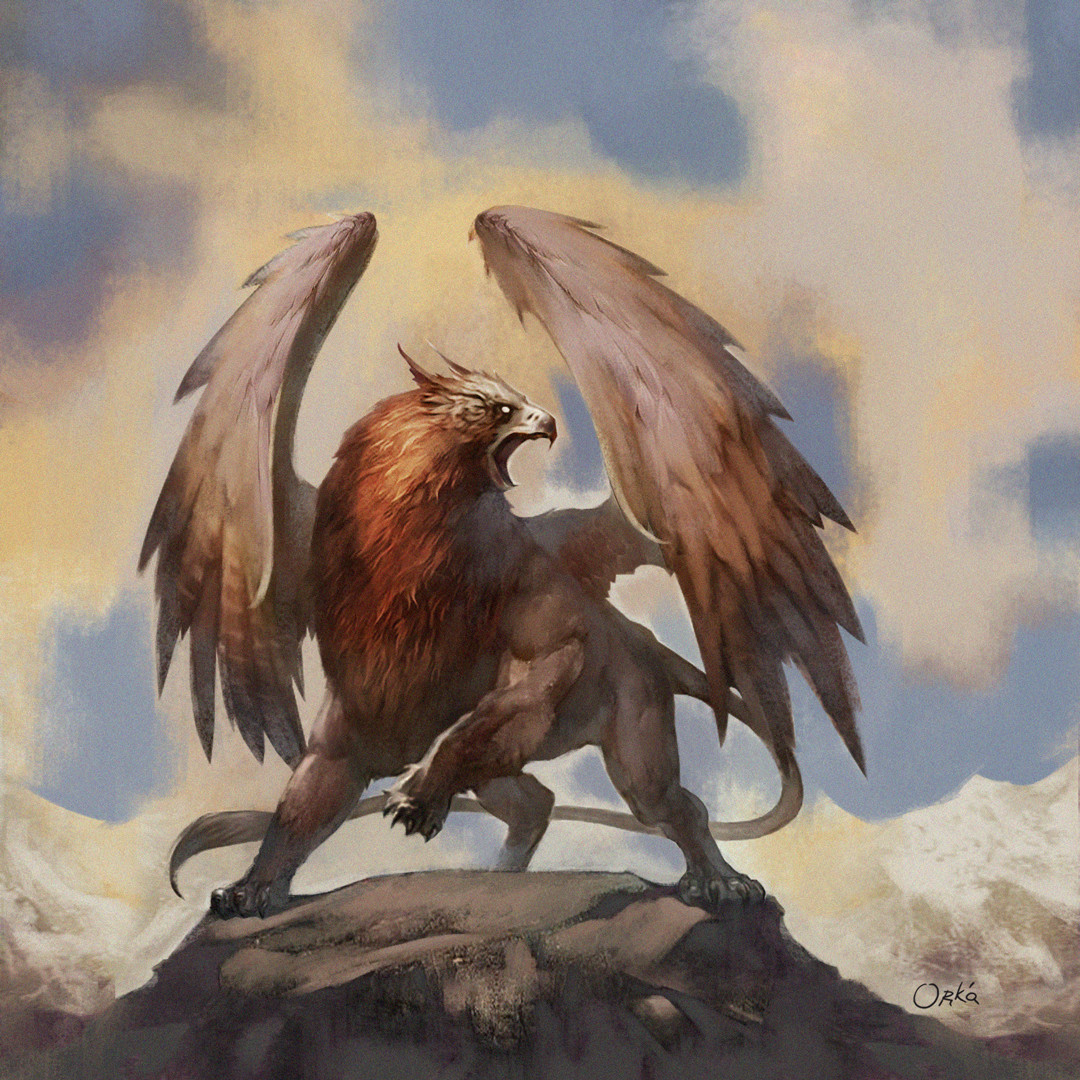 Griffin
The most dangerous predator of the Sekkora is the mighty, and majestic Griffin. These noble, and deadly beasts roost in the summits of the Irondust mountains and claim hundreds of acres of the forests that flock their lower valleys and foothills as their hunting grounds. The Griffins are sacred beasts among the Wapalli tribe, and are deeply revered within their culture. To slay one is considered a heinous offense. Unfortunately, as the Wapalli have been forced further and further into the edges of their lands, the Griffin has become a prime target of hunters and trappers who do not share the Wapalli's respect and reverence for the beasts. Griffins are hunted for their rich coats of feathers, and their hide, which fetch a considerable sum in markets both inside and outside the Odegon Frontier. The hunting of Griffins in the Odegon has been so wide spread in the previous centuries that their numbers have dwindled to near extinction and become the topic of certain conservationists in the Dwarven Odegon houses. The fate of the Odegon Griffin currently rests on a knife-edge, and many believe that the coming decades will determine whether or not the species survive.