She speaks in dreams, and omens. Her sign is a sudden twist of luck. A vengeful spirit with a penchant for plucky underdogs, She has made fools of kings, and lifted beggars into the thrones of sultans. 'Lady Luck,' 'Fate Herself,' 'Fortune,' these are pale titles for one who decides destiny. While other Endless inhabit the spheres of Her domain, none can contest Her will. In the Odegon Frontier, Fate Herself is either on your side, or your luck is about to run out.

The world of Orr is home to many Endless, the God-like entities born of mortal beliefs and virtues, but not all of these beings began as such, nor did they arrive to the world together.   Cloaked in the very mystery of her power, it's impossible to know whether the myriad of tales and legends surrounding Fate Herself have even a grain of truth, but in the way of the Endless, the very telling of them adds to her majesty.   Some believe that Fate Herself was once mortal and it is said that she was a courtesan of the Odegon Frontier. A sex-worker who was conscripted into an illicit gambling ring at a very young age. Sold into the care of the casino by her father to pay off a back-breaking debt, Fate was abused and tormented in unspeakable ways for many years, yet never lost hope that her luck would some day change. Her life as a prositute brought her into close quarters with many of the most ruthless outlaws, and corrupted mavericks of the Odegon's formative years. From them she learned of the evils in the frontier, of how life and death could be decided by a single hand in a game of cards, or the glint of the sun in a desperate exchange of pistols. Fate's luck only ever changed for the worse, and when her eventual murder went unsolved and unavenged, she rose as something greater and more terrible than any spirit or specter. Upon the outlaws of the frontier she laid a curse that their lives would end in terror, and in blood. Their fortunes would always slip away. Their luck would drive them only towards greater and greater gambles of folly.   Other tales say that Fate Herself arrived from The Black Lodge, the mysterious spirit realm spoken of by the first nation tribes of the region who were driven out by the Houses of Odegon. Spirits and entities of the Black Lodge are revered and feared. Many totems, and shrines lie abandoned in the wilds of the frontier; Some act as offering sites and anchorage points for communion with these spirits, while others have been thought to serve as wards of protection against the very same beings. The few chroniclers of the Woad Elves that may have knowledge of these ritual sites, or the legends of the Lodge and its entities are hesitant to invoke the stories. Among the Woad Elves, however, Fate Herself is refered to as N'Sukgaji, or, simply as the Woman in Black.   Another, much more pragmatic viewpoint is that Fate Herself is in fact simply a daughter ideal of Varissia and Pondera, whose spheres she borrows from.

Fate Herself acts as a strange conduit of magical power within the Odegon Frontier. While clerics of the Endless are able to practice and perform the miracles of their faith, the power does not derive from them directly, but rather, is performed on their behalf by Fate. No one is certain how this is possible, nor certain that it is Fate at all. This phenomenon has lead many scholars and theologians to suspect that Fate could possibly be something... 'else'... Something other than an Endless. Something, perhaps, unwanted. Queries into such matters have left an inexplicable trail of sudden deaths and impossible tragedies, however.   Furthermore, in no other region of the world can there be found the unique arcane traditions that have arose in the Odegon Frontier. These magical arts could (if assembled) form a strange college dependent upon skill, and daring rather than precise, magical speculation and learning. While the Magisterium of Dalair, and many other orders of mages throughout the world might consider these the arts of a Arcane Pact (such as those made between the Fey and mortals), in the Odegon, it is a power that can be stumbled upon in little more than a game of chance, leading many wizards to suppose that Fate Herself is the patron of hundreds of unsuspecting mages.   In many ways, Fate Herself seems willing to act as a fountain for power in the frontier, yet she hears, and answers no prayers; Bestows the boon of magic to the lucky, and strips them of of the power in a future turn without cause or warning. She cannot be appeased, bargained with, or questioned. Her precense cannot be called into a site such as a temple like the other Endless, nor can it be barred by consecration or revoking arts. 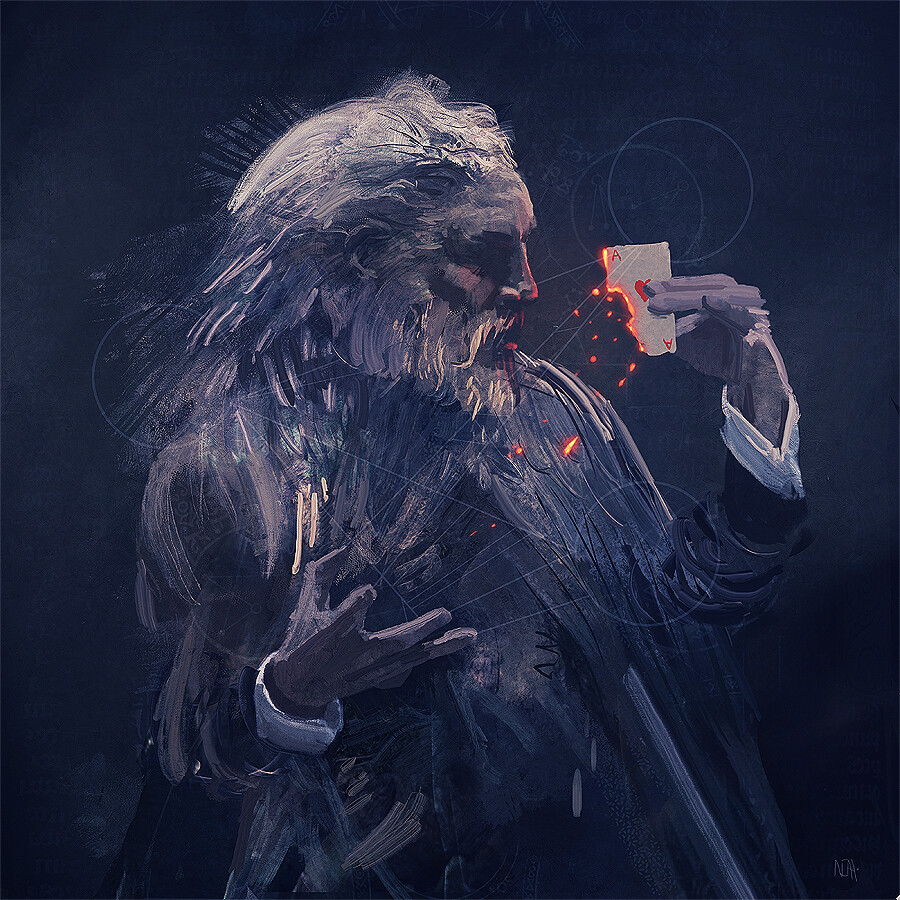 The Magician by Noah Stacey