The State of Chaos Geographic

The State of Chaos was the informal name for the former Terran Imperial worlds after the fall of The Terran Empire its subsequent partition by the Karkouri Regime and the Dhau Empire.


The Fall of the Empire

see the Hassall League Containing New Silesia, New Corinth, Stark, Vanheim, Whitworth, Fort Kurzon and Eden, with Whitworth functioning as the capital.
This area will be governed by the Caretaker Government which will be a terran/Indirian government put together with supervision of the Karkouri. Supreme authority will lie, at least initially, with Governor-General who will be a senior Karkouri General.
A Karkouri civil service will also be brought in to work with the local one. This area will function as a Karkouri vassal state.

see Dragonfish Protectorate  Containing Avalon, Al Ahily, Tortuga and Jasper.
This area will be handed over to its own governors with the understanding that the Karkouri will expect them to remain separate from all other governments, they will not be permitted to form alliances with any other powers, unless they wish to become a protectorate of the Karkouri.

see St. Lawrence Compact Containing St Lawrence, Fort Darwin, Sycamore, Furnace and Van Diemen’s World with St Lawrence acting as the Capital.
This area will be an independent enclave with St Lawrence serving as its capital. The Karkouri will, however, expect tribute payments for 20 years at a fairly reasonable rate. They will station a garrison on Van Diemen’s World too, though this may only be temporary. They will also offer the use of some civil servants too, otherwise they’ll leave the Compact alone. They will also be forbidden during the first 20 years to sign any treaties

The former frontier worlds of Skerrit's World, Vodhyna, Prospero and Theta Draconis, along with the former Taur'leir worlds will all fall under the Dhau Empire

The remaining unincorporated worlds have been allowed by the Karkouri to resolve their issues of governance however they wish.

The Imperial Parliament, under the leadership of Leander Ashpool, MP, called for the foundation of a new Terran Republic. This mooted state would operate from Earth and invited all other worlds to join it. Furthermore, it did not initially accept the surrender to the Karkouri Regime.
See The Terran Republic 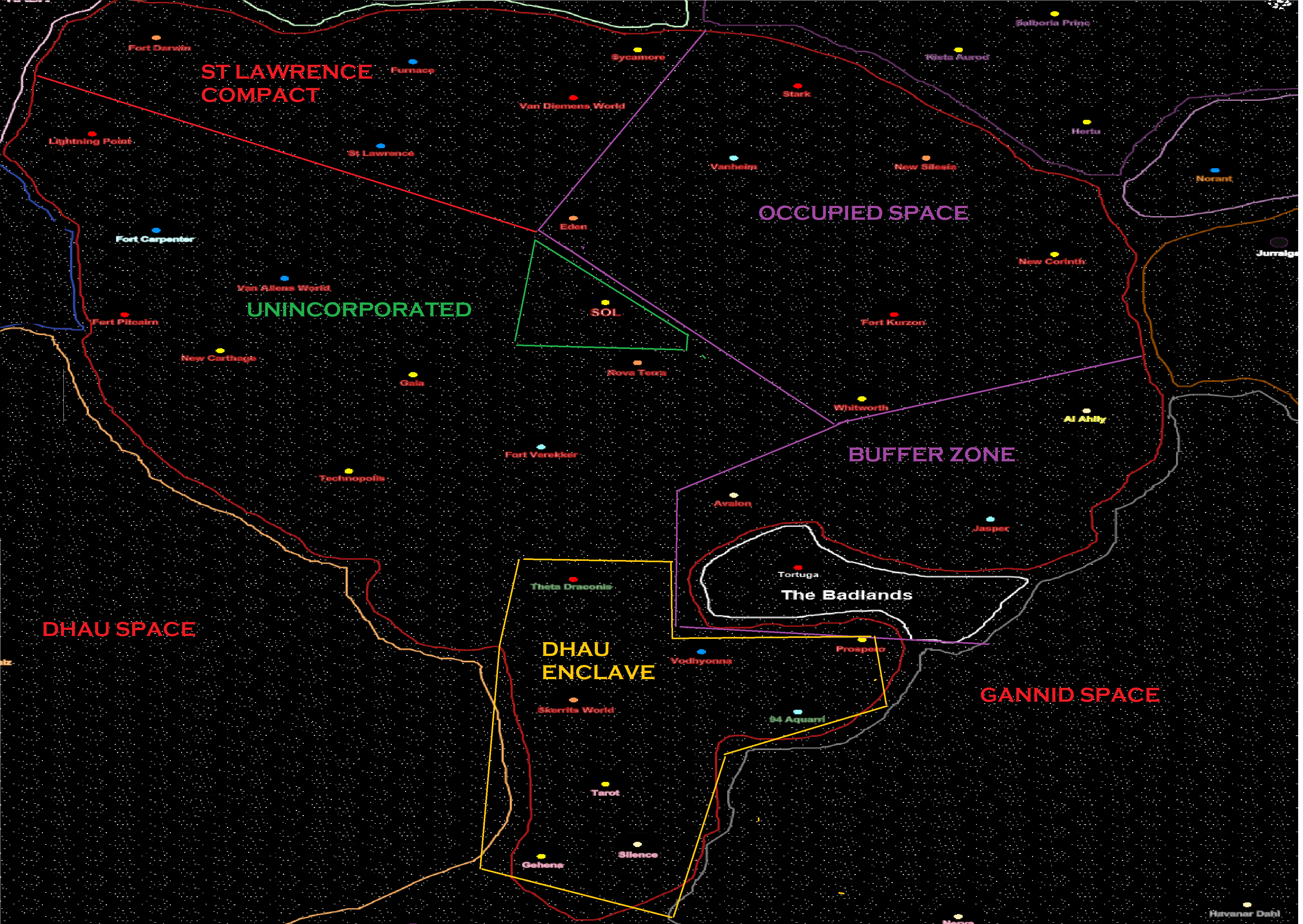